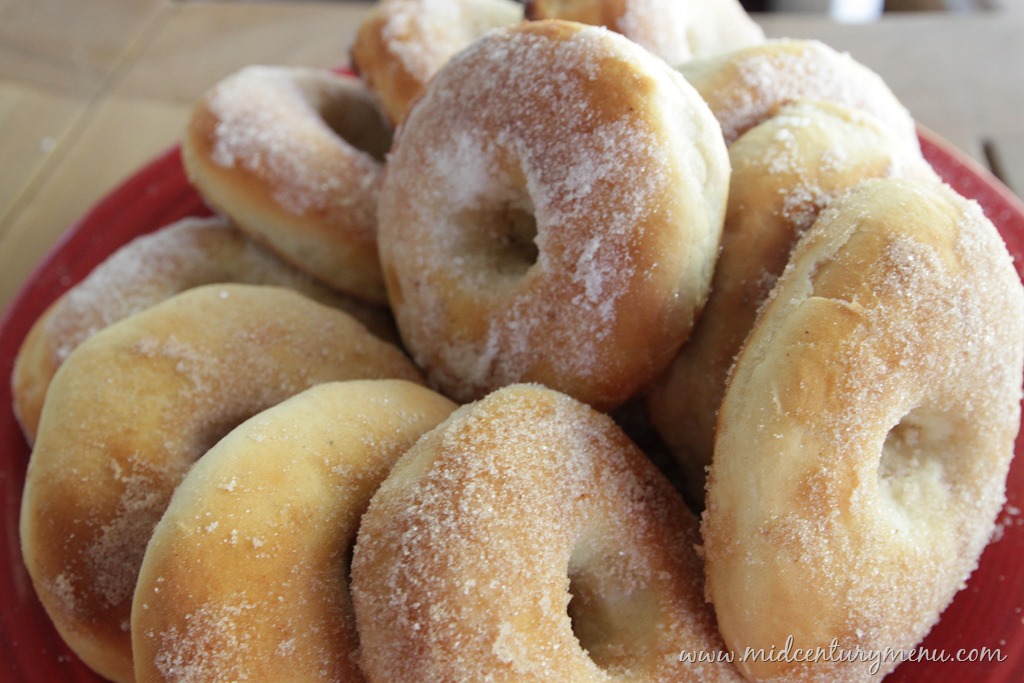 Happy Halloween! This week we are celebrating with one of the most traditional of mid-century Halloween Foods: The Homemade Doughnut! 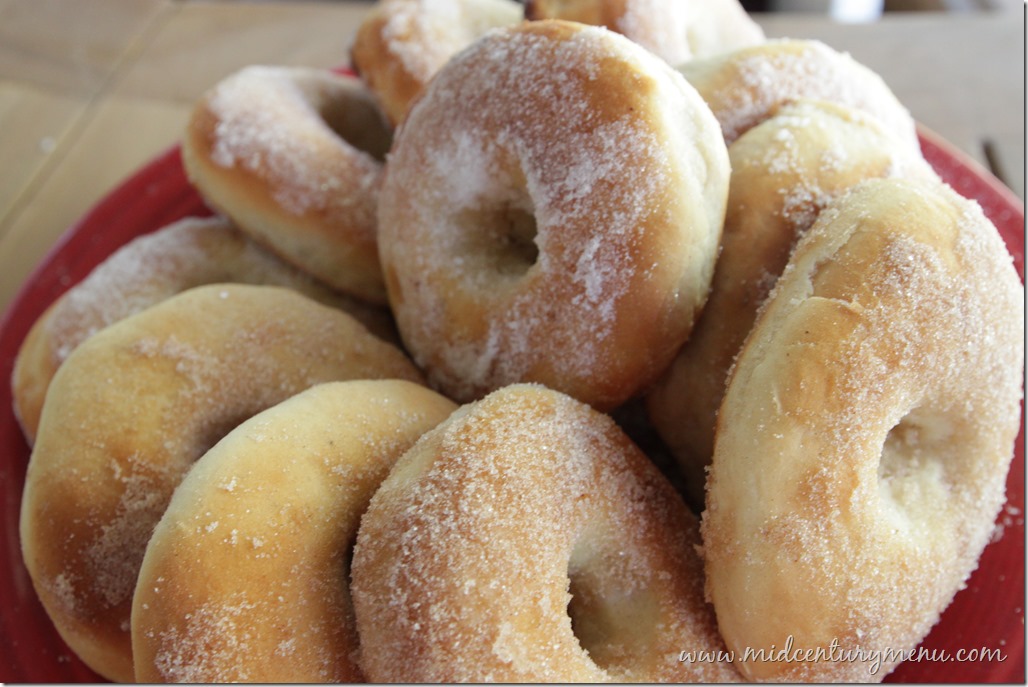 And because I hate standing around frying things, this is a No-Fry (aka Baked) Doughnut!

4.7 from 3 reviews
Print
No-Fry Doughnuts
Author: Newspaper Article, 1976
Ingredients
Instructions
3.2.1311
It is also no-knead, as in you can make it in your upright mixer and don’t have to get your hands in the dough. Which makes it even easier. 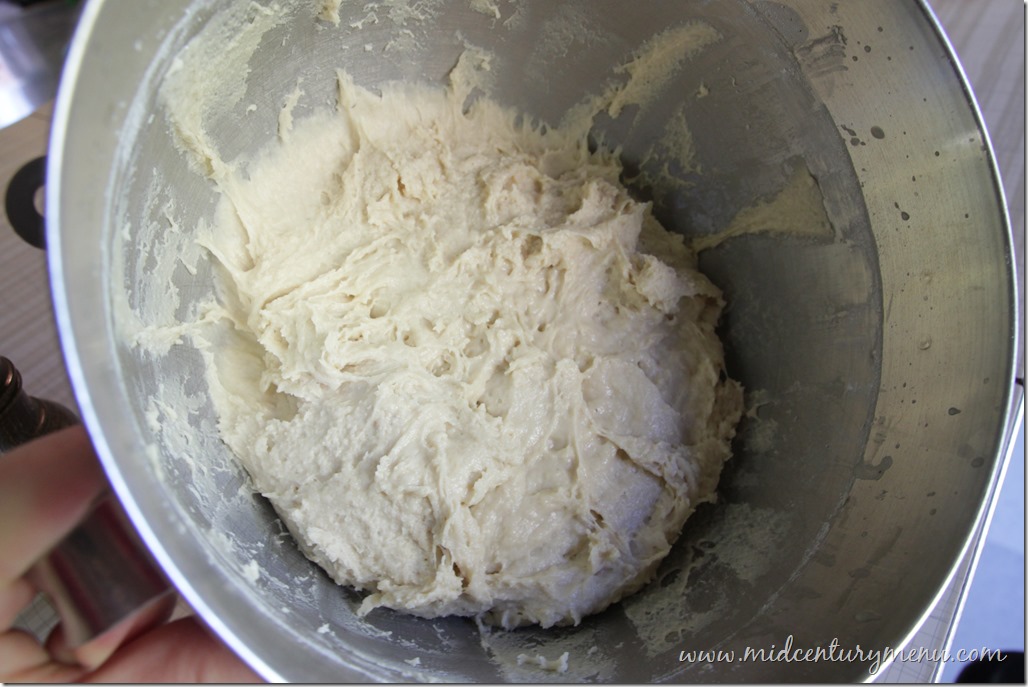 No, no. No thanks necessary. I just love you guys that much. 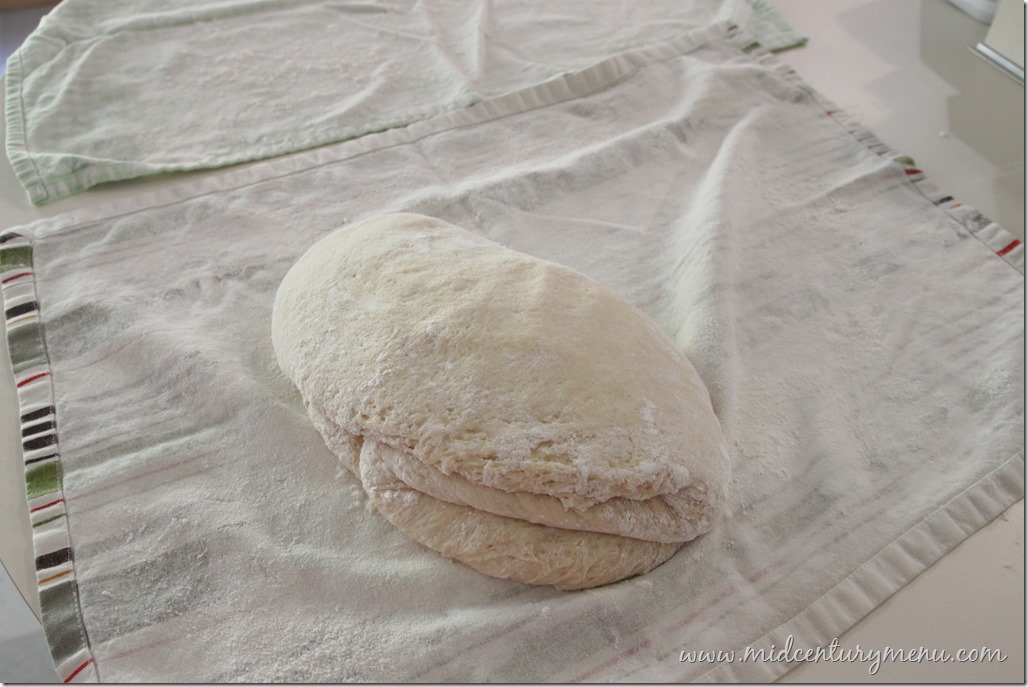 This dough was so incredibly soft. It practically poured out of the mixing bowl. I am thinking that if you are lucky enough to have a doughnut pan laying around, you could probably just put this batter into a ziploc bag, snip of the tip and just pipe it straight into the pan.

Another side note, the floured pastry cloth or clean dish towel are necessary for this recipe. And if you can’t find a stockinet for your rolling pin (like me) just throw another floured cloth over the dough and roll your rolling pin on that. 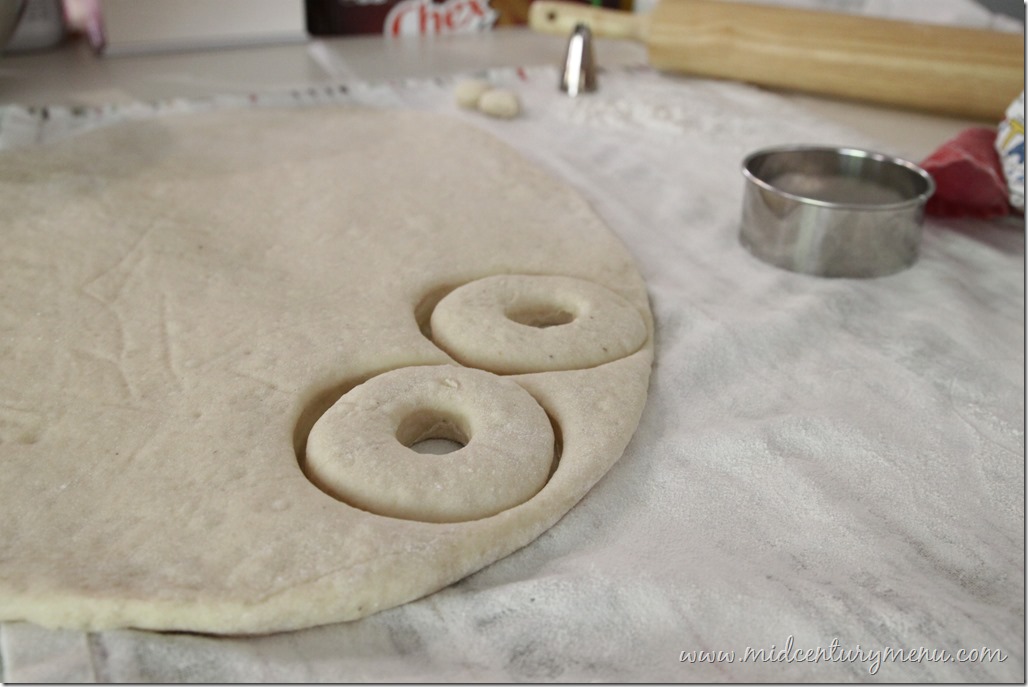 Can you see the nutmeg in the doughnuts?  If you’ve ever wondered what that “old-fashioned” taste is in a doughnut, that’s the nutmeg.

Speaking of old-fashioned, every year I get lots of emails asking me what a traditional Mid-Century Halloween party would look like, and the answer is: Homemade. This was the time to make doughnuts or cupcakes and have your children or party guests decorate them. The party was rounded out with hot cider, mugs of soup or chili and then popcorn balls, fudge or candied apples, also homemade. 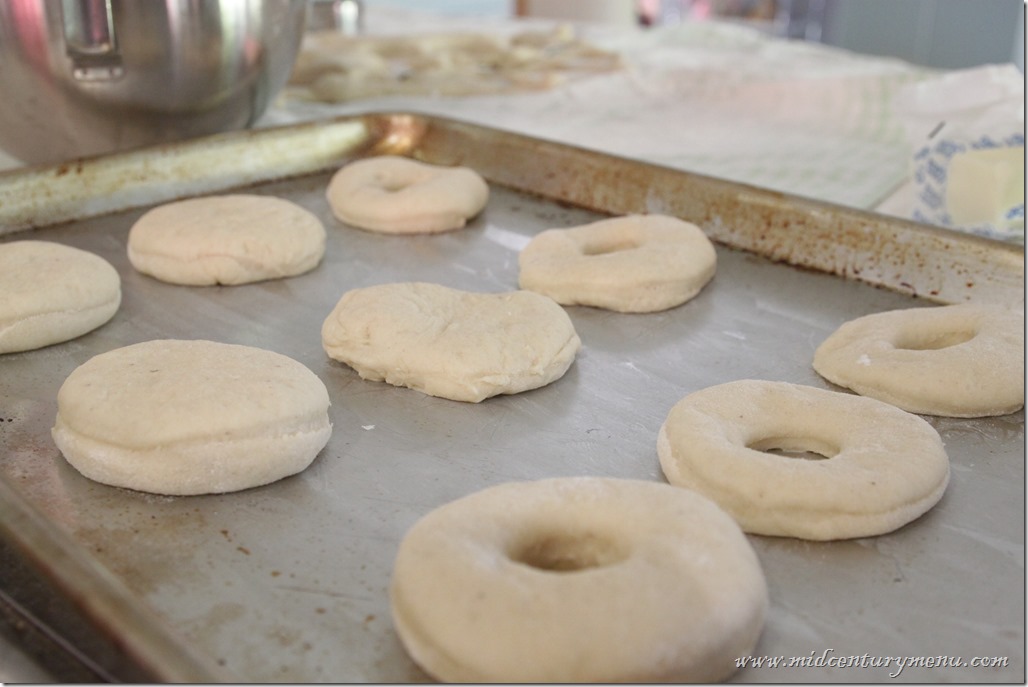 Did you guys ever get homemade treats when you were trick-or-treating? I remember when I was very young we used to get homemade candy, doughnuts and popcorn balls, though we never got to eat them. It was right around the time that those urban myths about poisoned  apples and razor-blade-filled homemade candies started circulating on the news, and so my parents always threw all our homemade treats away. I can vividly remember my mom looking sadly at a particularly neat and pretty popcorn ball before throwing it in the trash. A few years after that, the homemade treats dried up and all that was in our baskets were safe, sealed treats. But you can still carry on the tradition by making your own homemade treats! 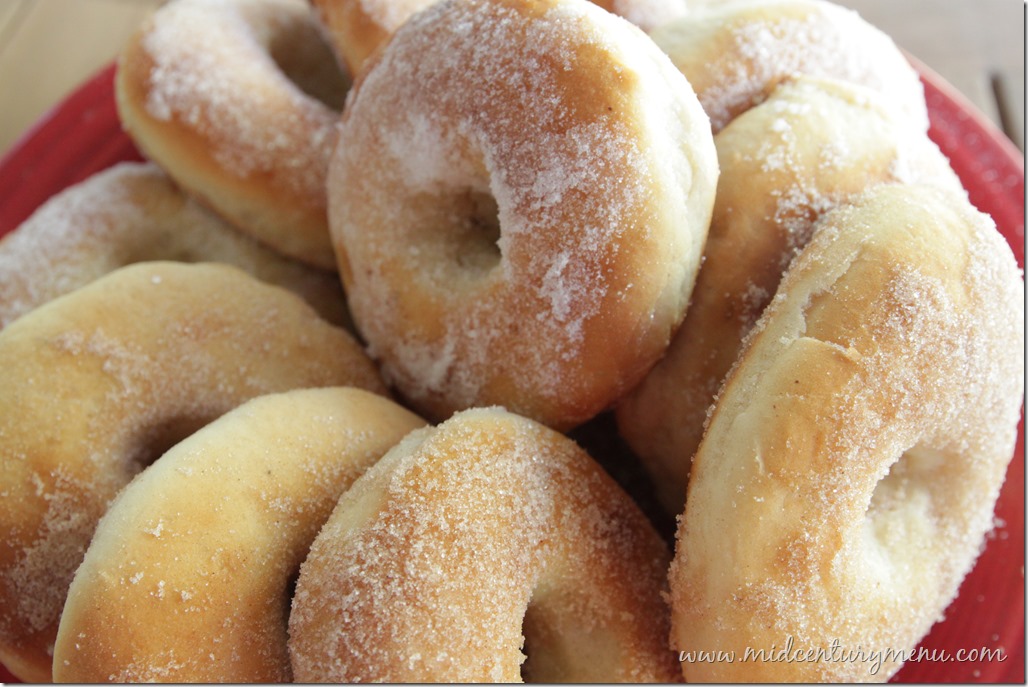 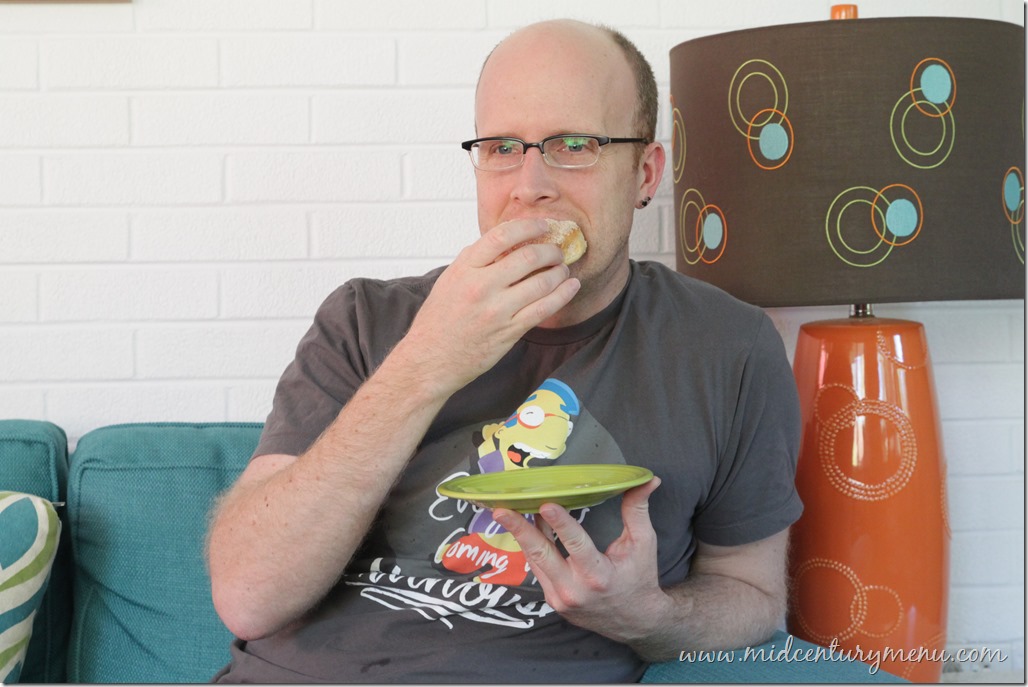 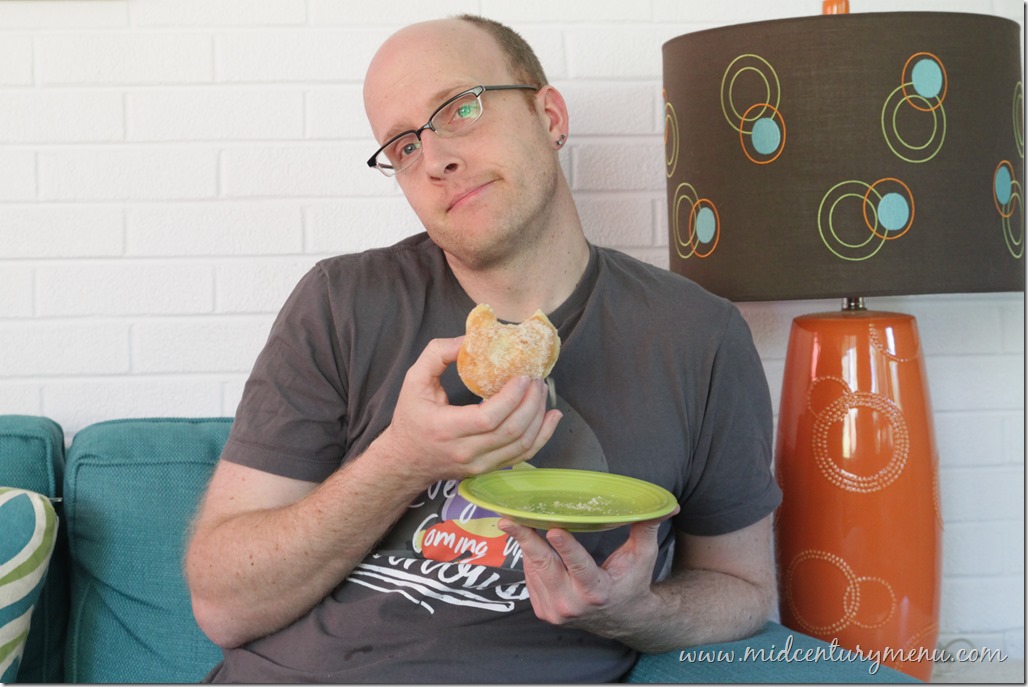 “Soft and covered with sugar.”

“So are they delicious?”

Though these strangely resembled bagels when they came out of the oven, these were actually pretty good substitutes for a fried yeast doughnut. They don’t have the thick, moistness of a cake doughnut,  or the fried taste of a real yeast doughnut, but they were still very good. They were more like really light and very fluffy cinnamon rolls. They were absolutely delicious while still warm from the oven and dipped in the sugar. In fact, when I make these again (because I will) I will add more cinnamon and probably make a glaze for them rather than just dipping them in sugar. Or maybe I will just go all the way and make them into actual cinnamon rolls rather than doughnuts. If you decide to make these as part of your Halloween party or evening, I would suggest making a glaze, putting out bowls of candy and letting everyone decorate their own doughnut while it is still warm from the oven. ‘Tis the season!