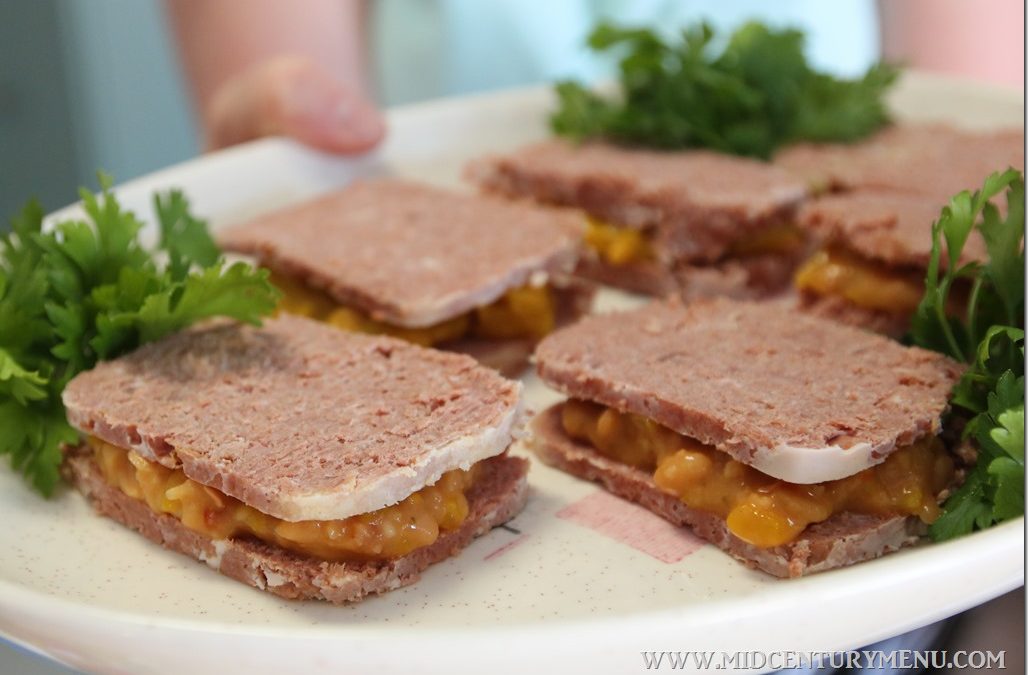 Well, I hope you all have something exciting planned this year for St. Patrick’s Day. If not, maybe you can get crazy by making a vintage St. Patrick’s Day dinner. And I have just the thing for you to try. May I present to you… 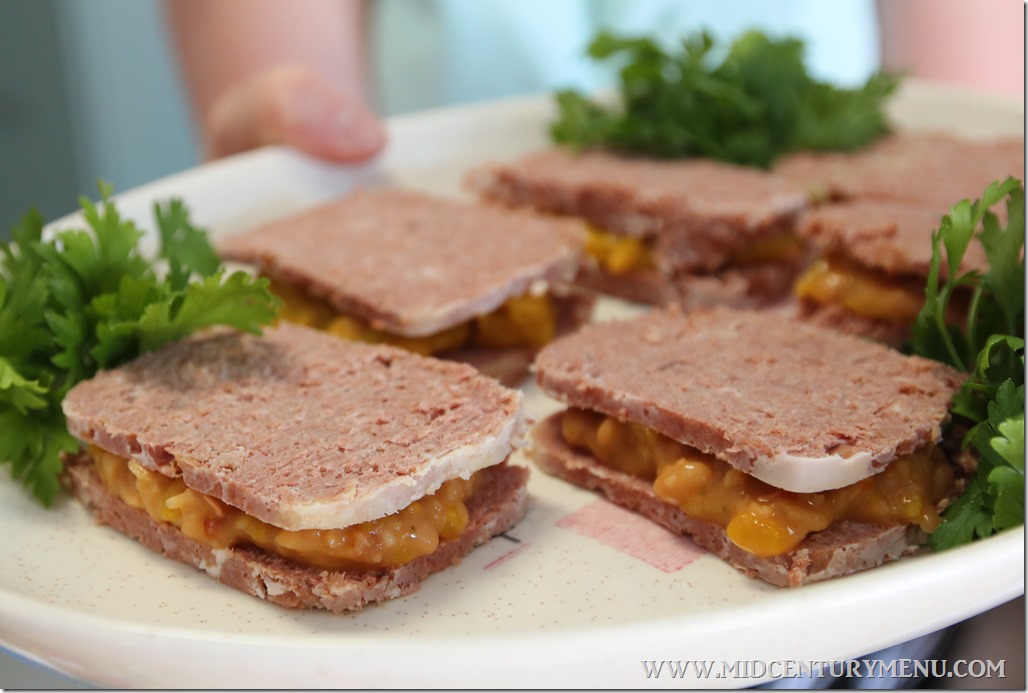 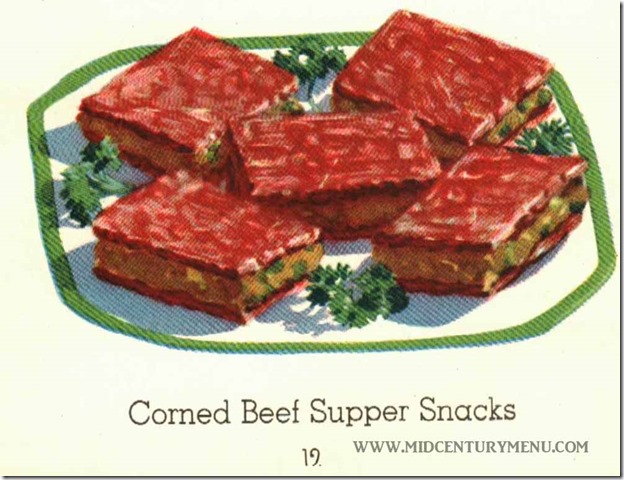 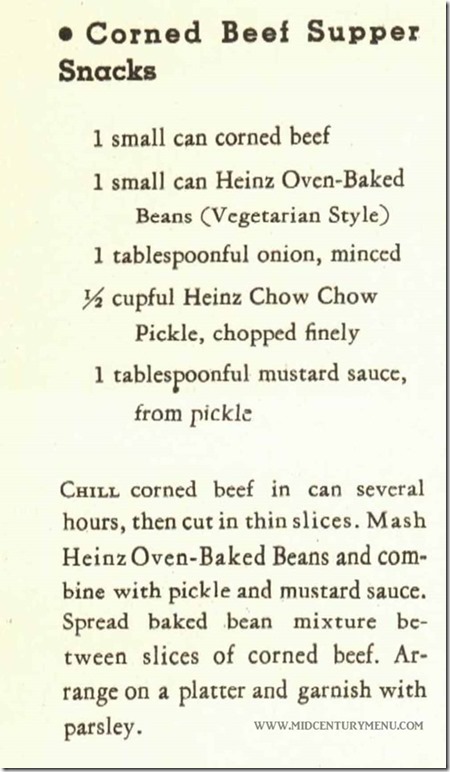 This recipe is from Thrifty New Tips for Grand Old Favorites that was published by Heinz in 1932. This book is basically about how to make the most out of a can of baked beans, and it does so quite spectacularly. This book is also illustrated rather than having food photos, which was a common thing for cookbooks and pamphlets in the 1920’s and 1930’s and is very fun. And I love the illustrations. In fact, the illustration of this recipe is the reason I picked this to test. At first I thought it was some sort of crazy gelatin salad, but then I realized it was actually a bread-less sandwich and I was even more intrigued. It also uses chow chow relish, which is a veggie relish that varies greatly, but basically you can use any vegetable, but most of the time I see recipes that use primarily cabbage. I see recipes for chow chow itself a lot in vintage cookbooks, but you hardly ever see recipes that use chow chow in them. I think because it is meant to be a sandwich condiment.

This is usually the part where I poke a little fun at a recipe, but I just want to say that it’s only gentle fun. I have a lot of respect for Depression food. It is right up there with recipes from the World Wars in terms of creativity and ingenuity. So if I am going to say anything about this recipe, its that I think the hook of in this recipe is coming from the ability to chill your can of corned beef and serving everything cold rather than heating it. Since refrigerators were still relatively new, the cold food trend was very big and very classy, so I think this was an attempt to fancy up some canned corned beef. And maybe sell some vegetarian beans. 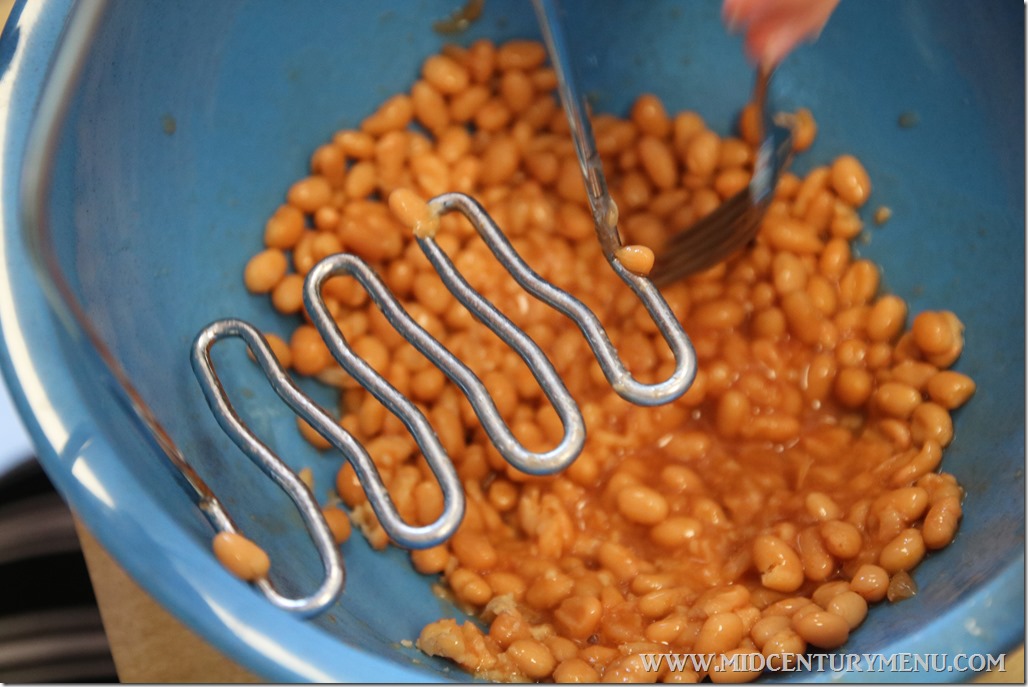 Speaking of beans, I actually could not find vegetarian oven-baked beans in my local grocery store. According to the Heinz pamphlet, these are not regular baked beans, like Bush’s Baked beans in the orange can that we are all familiar with. These are a cousin of pork and beans, but obviously without the pork. They are available on Amazon, but I decided to skip that because of the cost. And because I didn’t think the taste would be too different with or without the pork. So I just went with regular pork and beans. And I also drained off most of the sauce, anyway. They were really runny. 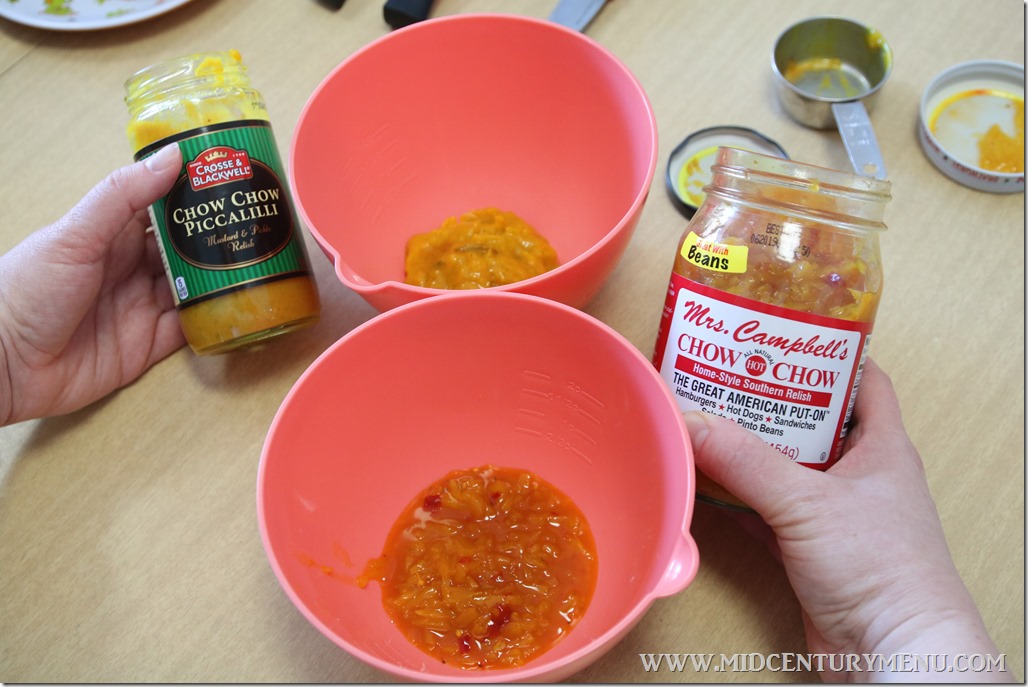 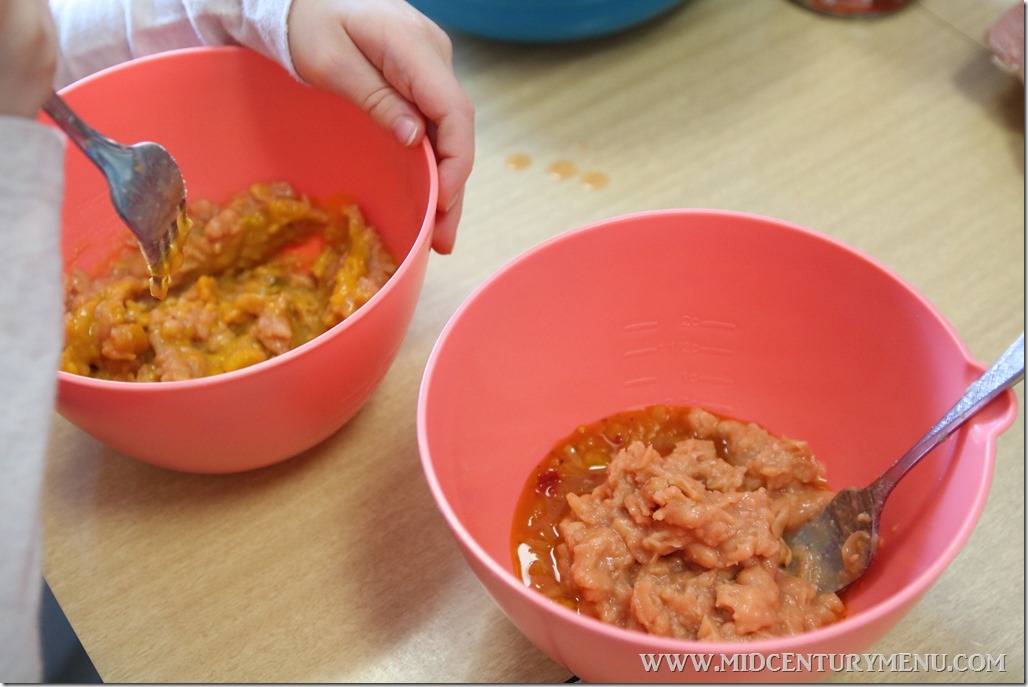 Plus, then Alex got to do more mixing, which she was pretty excited about.

Another side note, we ended up adding onion powder instead of actual onion because our onion was moldy. Such is life. 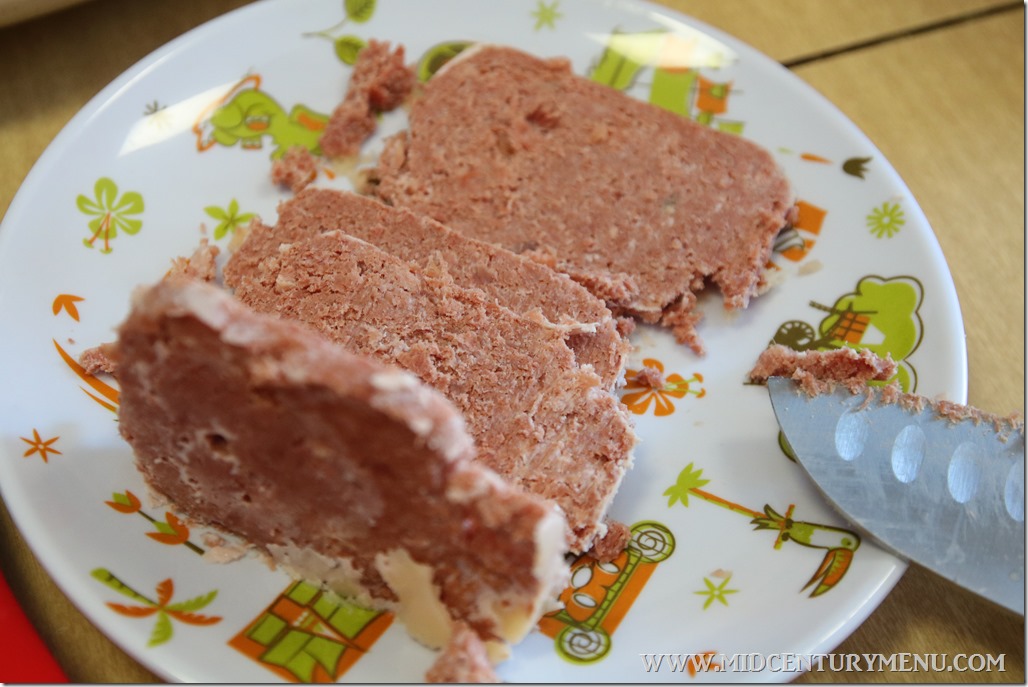 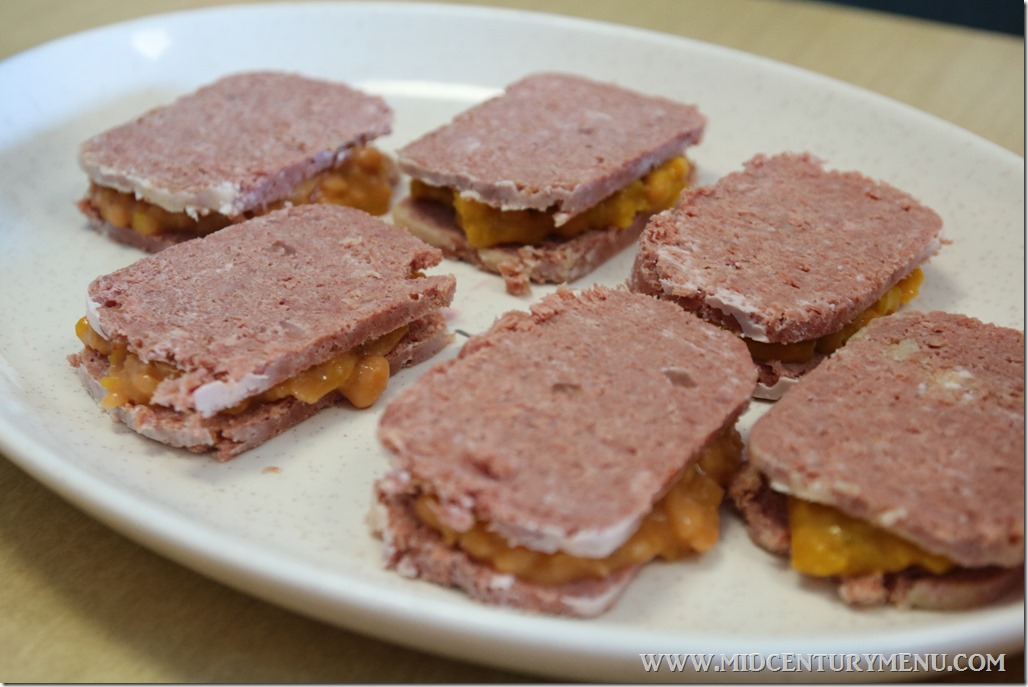 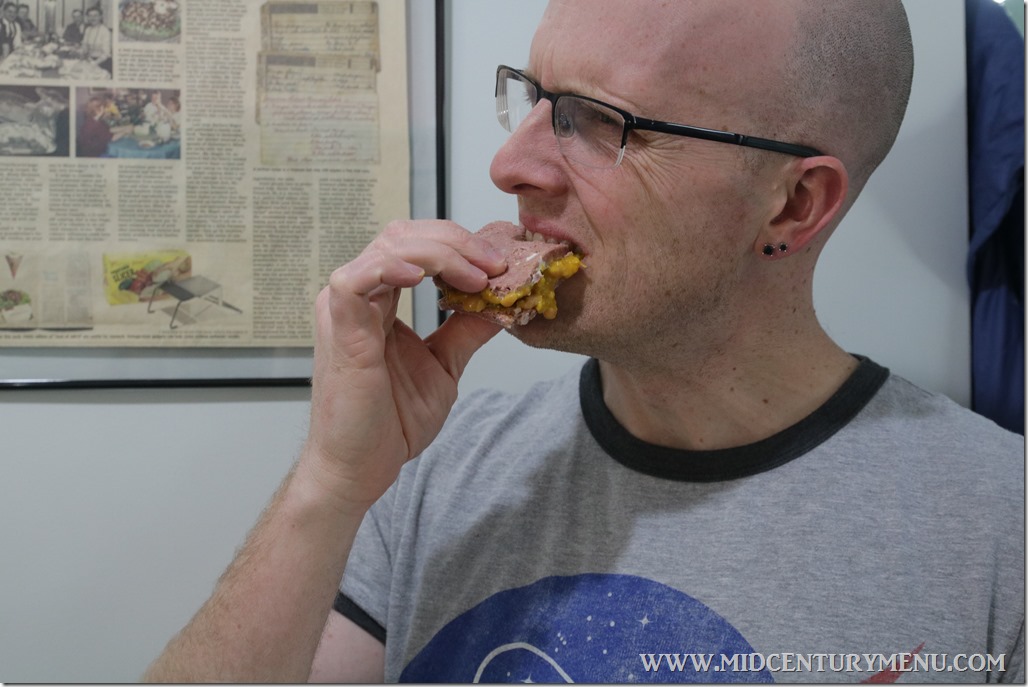 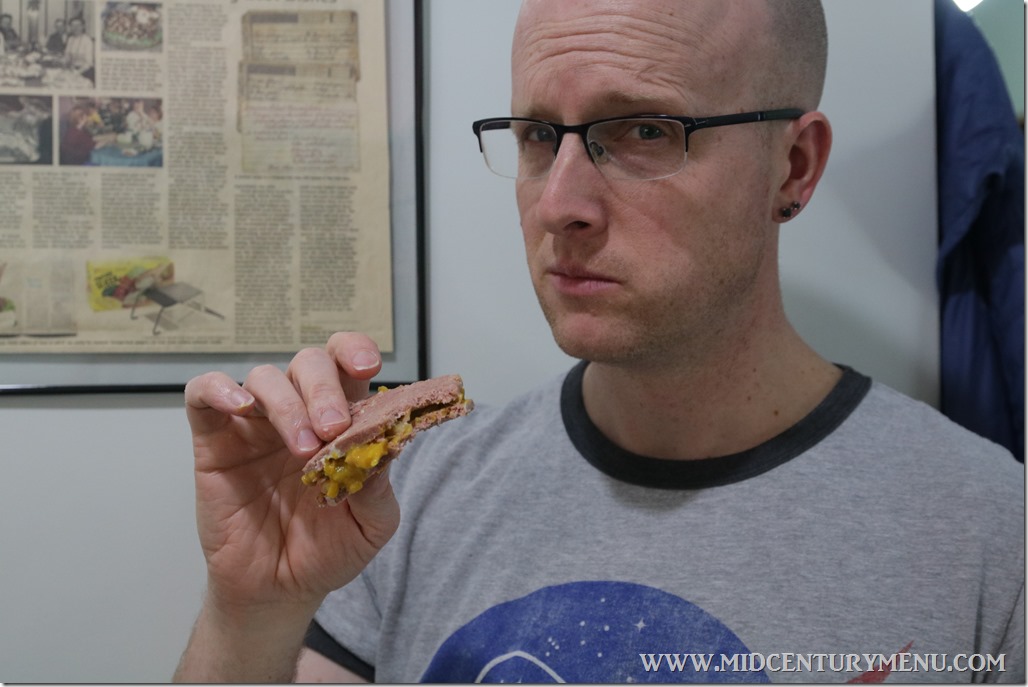 These were fine. They tasted like cold, canned corned beef with a tart, vinegar-y filling. So if that’s your thing, then you will love these. The bean filling was actually quite good. It was smooth and had a good flavor from the chow chow. The mustard-y Crosse and Blackwell chow chow was better, in my opinion. The Southern style chow chow was on the sweet side and would have been better on hamburgers or hot dogs. But it wasn’t offensive. Tom never really got over the no bread thing, but Alex thought it was really cool. She ended up eating a lot of these, which I thought was interesting. She also preferred the mustard chow chow vs. the southern one. And, just for experimentation purposes, I heated one up to see the difference. I thought it was improved with heating because I’m not a fan of cold canned corned beef, but Alex and Tom preferred it cold.

Fun bonus: While we were taking photos of Tom tasting, Alex decided she wanted to add some more parsley to the platter. Until it was perfect. 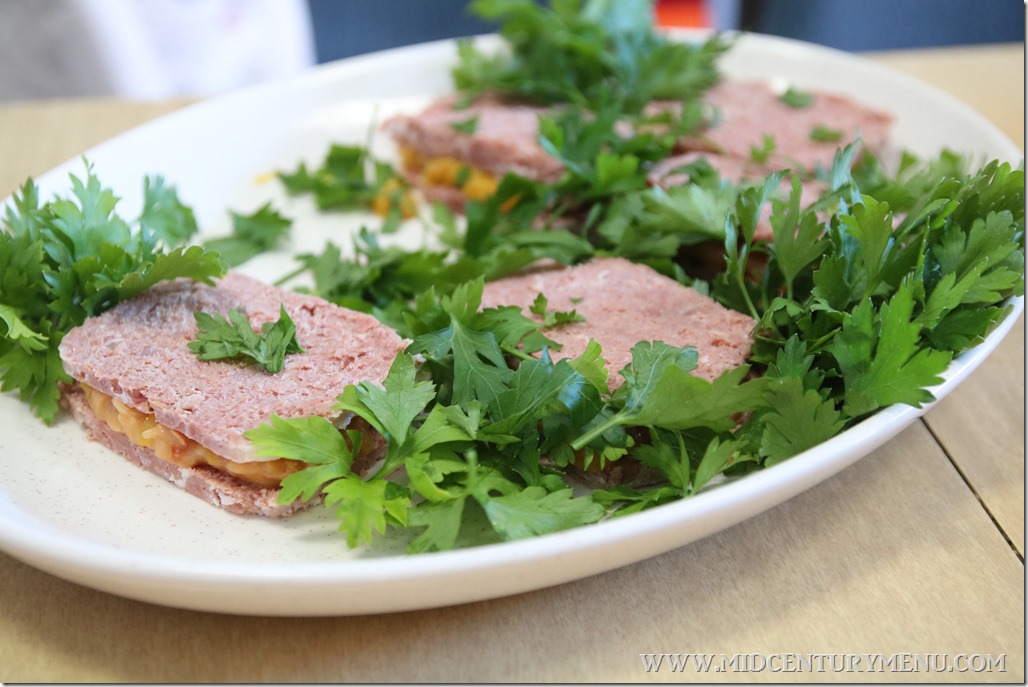