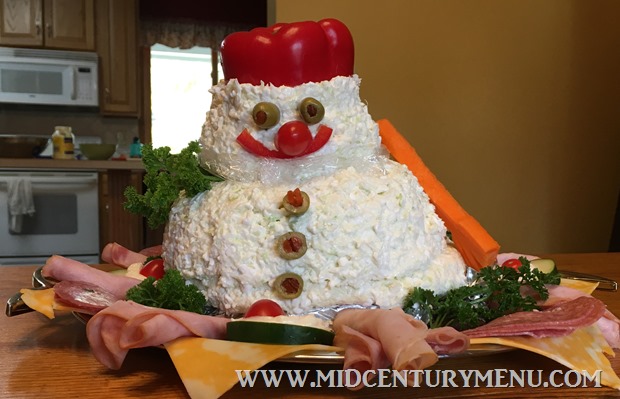 Back when I shared the fabulous Mt. Fuji gelatin, I told you about a second project I’d assigned to Carolyn and her scientist friends. And by “project”, I of course mean ridiculous gelatin. This Christmas week, snuggle up in your comfiest chair, grab yourself a warm (potentially boozy) drink, and follow along with:

THEATER!!!!! (Told and Illustrated Through Pictures By Carolyn) 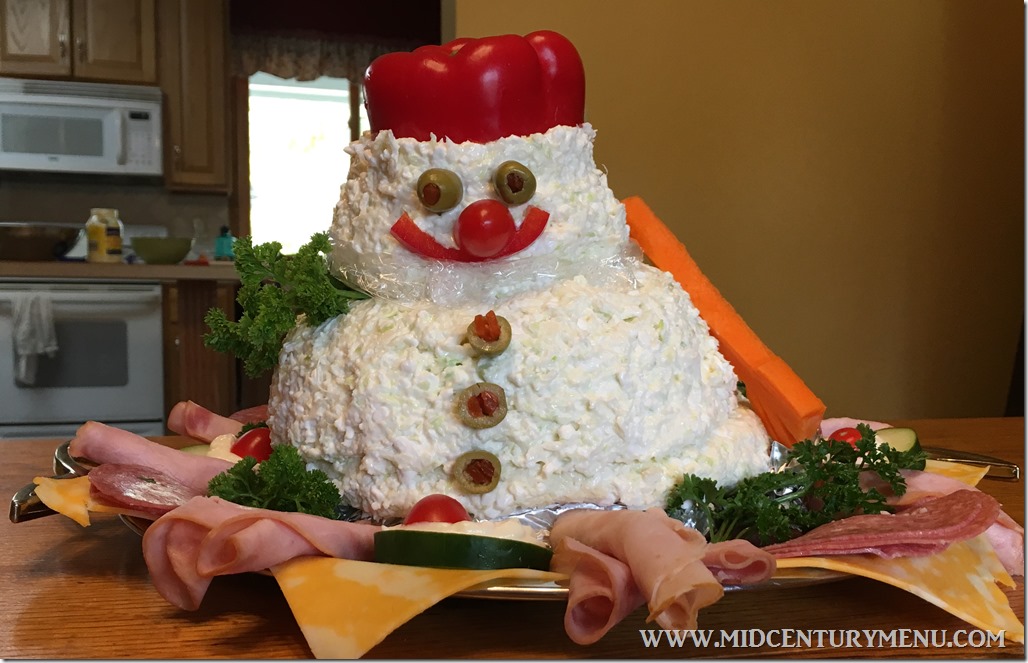 This is Frosty Slaw Man.

On a warm fall night in September, Carolyn sent a text message to Ruth.

“So, my friends are coming for Hallowe’en again, if you want to make use of our skills.”

Ruth searched her recipe collection until, late one night, she happened upon Frosty. Frosty Slaw Man. She immediately sent him to Carolyn for testing. 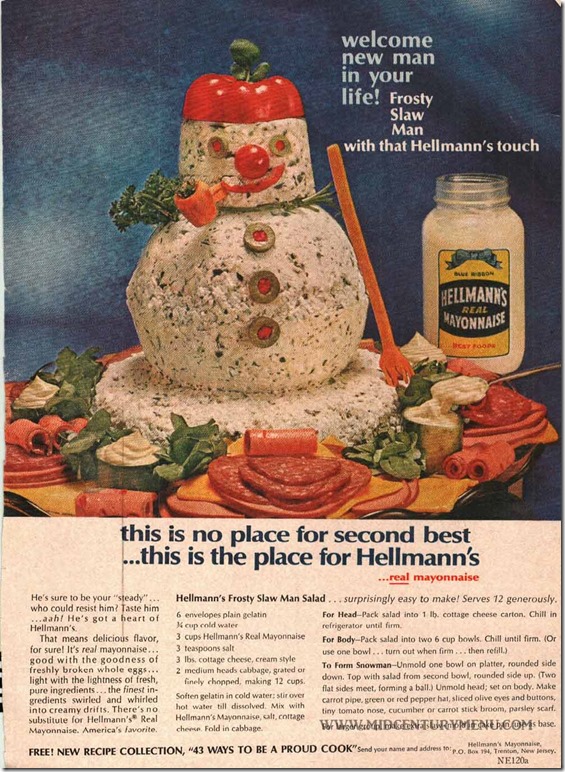 If only they’d listened to Alana’s gut and stopped RIGHT THEN. But no. They had to press on. 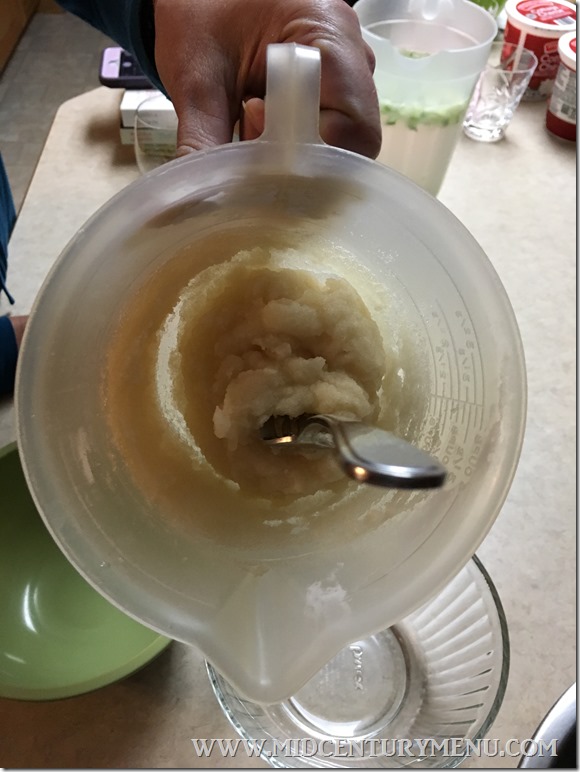 The instructions were as clear as mud. “Soften gelatin in cold water; stir over hot water till dissolved.”

And the horrors had begun. 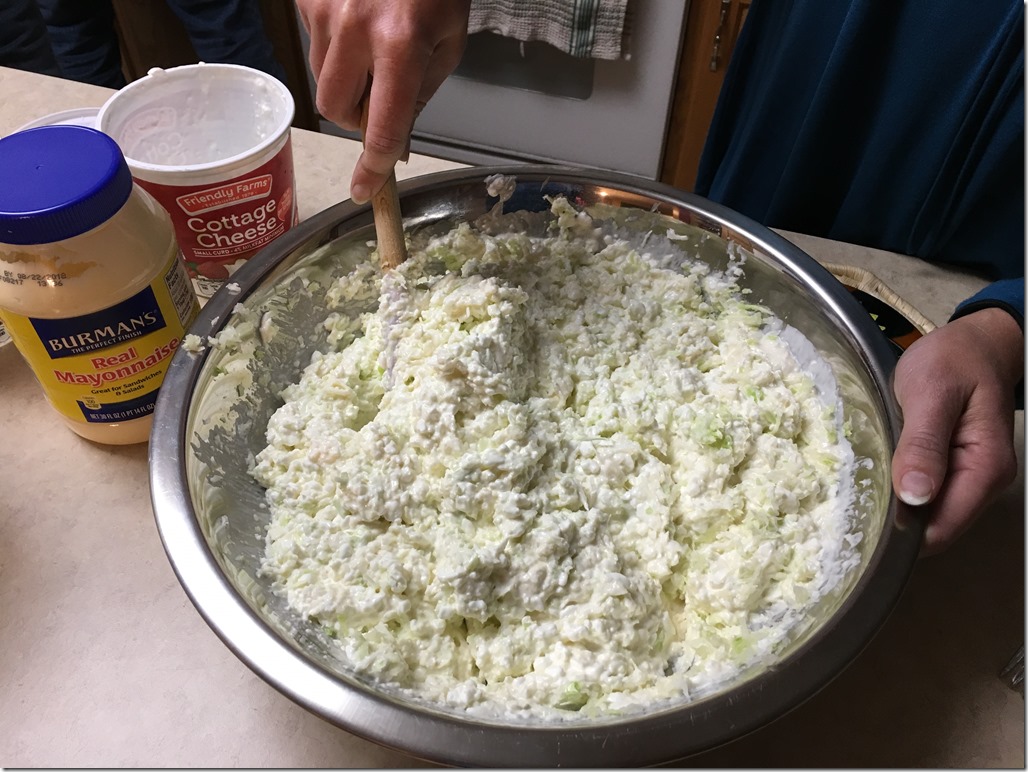 They managed to liquefy the gelatin bits again and continued, mixing the ingredients “….into creamy drifts.”

“Basically, yeah. With some salt or something.” 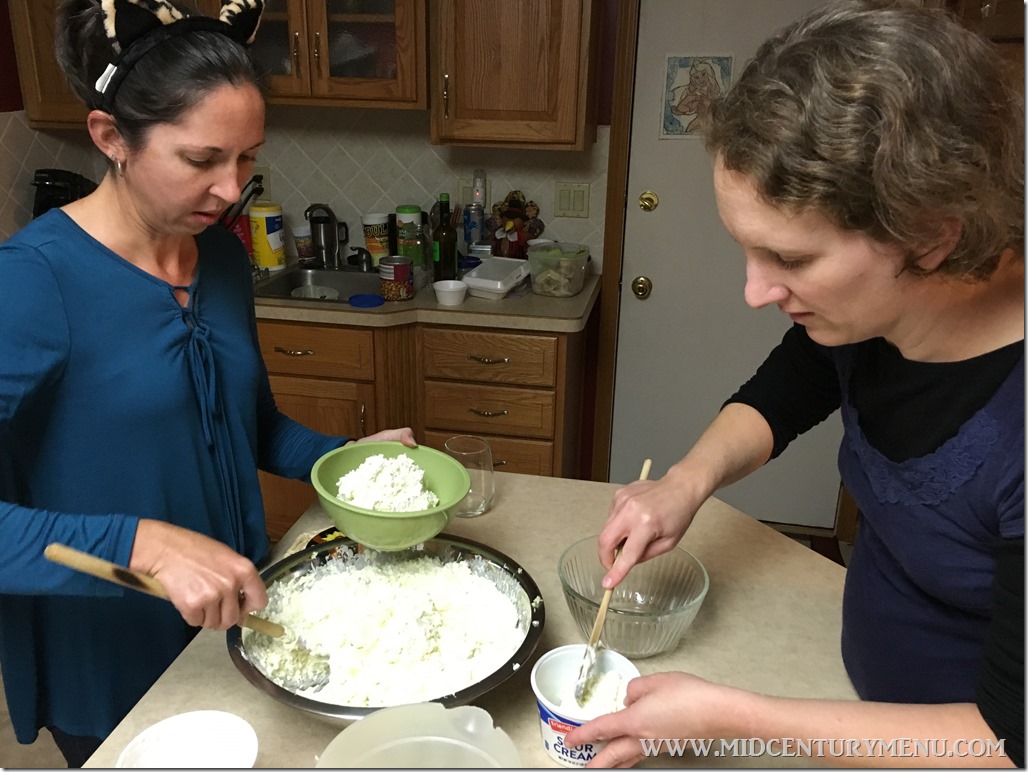 The sound was something like when your foot gets stuck in the mud. “Sluuuurp. Slurrrrrp.” But they patted away and diligently forced the mixture into the molds. Suddenly, from behind, they heard a yell: 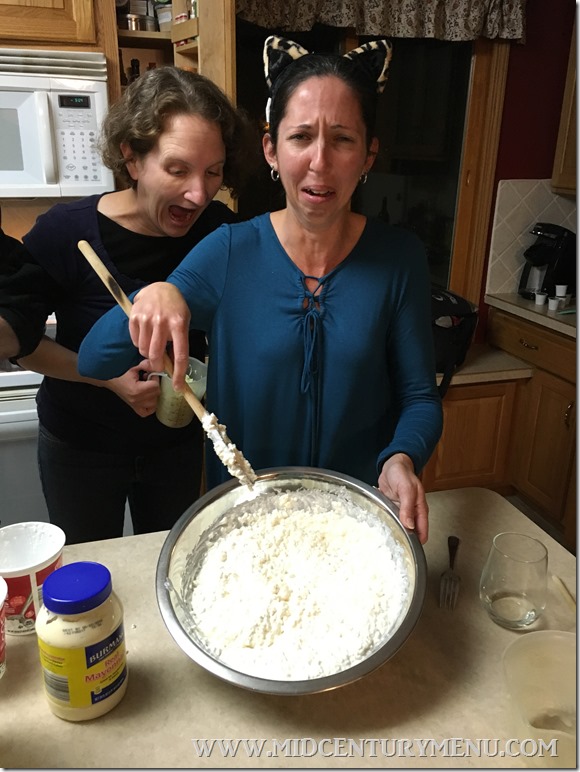 They did not have an answer, so they took another drink of liquid courage and pressed on.

They hit a snag when Carolyn realized she didn’t have Hellmann’s mayonnaise.

“Crud. Whatever, let’s use this other stuff. It’ll be fine.” 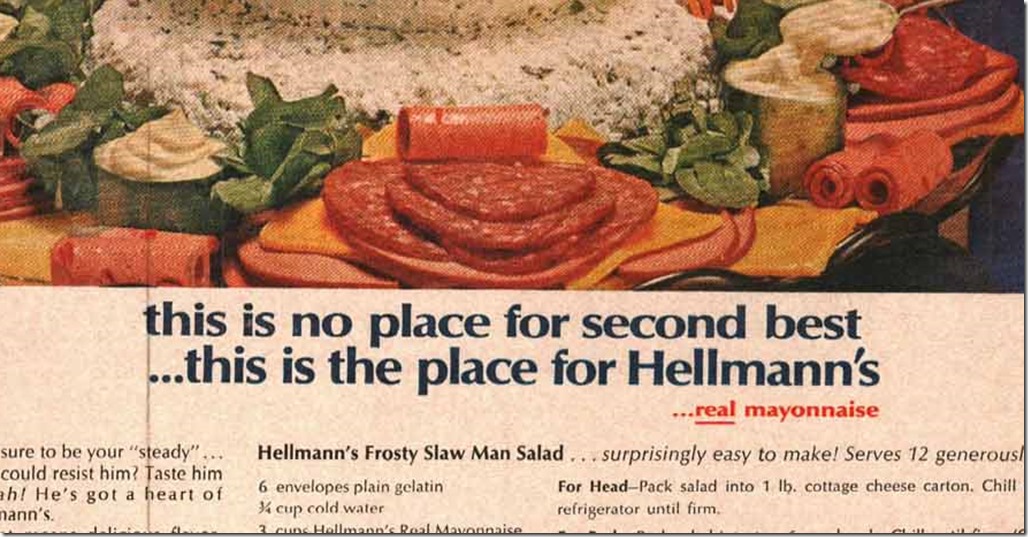 “But what if there’s some kind of proprietary mix for Hellmann’s that makes it bond properly with the gelatin? WHAT IF WE’RE TOTALLY SCREWING IT UP!!??!?!” 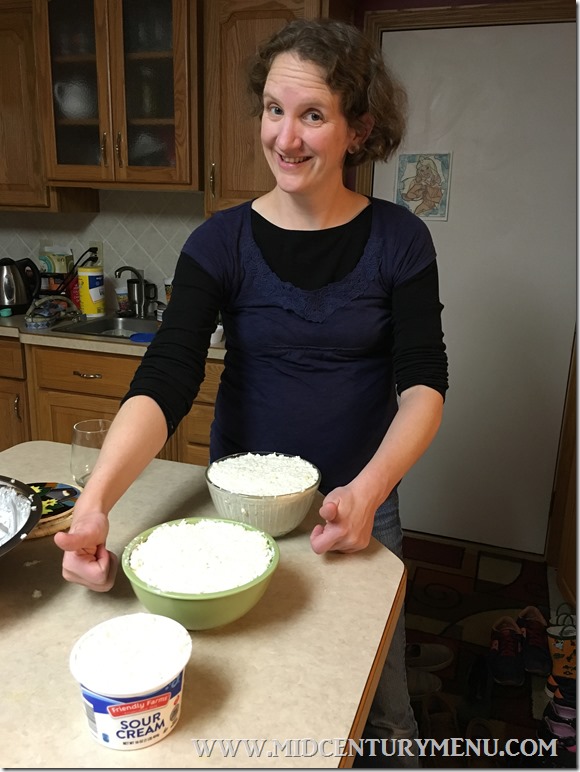 But they should have. THEY SHOULD HAVE.

Ruth came over the next day to survey the team’s work. She was somewhat pleased to learn that making her recipe had not driven them mad. However, upon unmolding Frosty’s base layer, they realized….something was wrong. 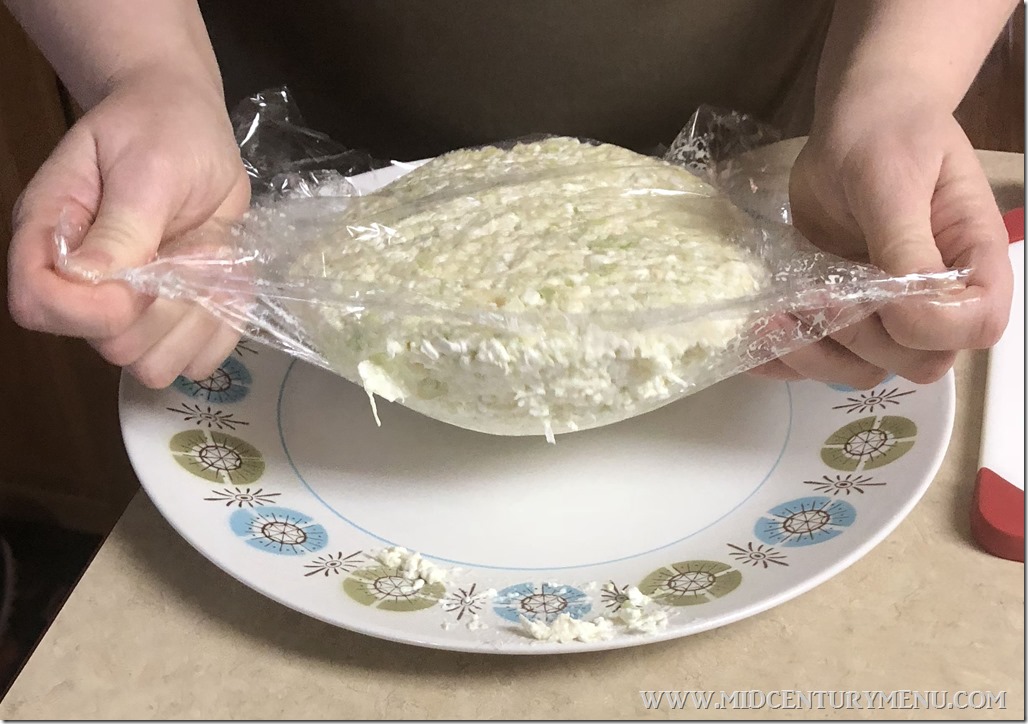 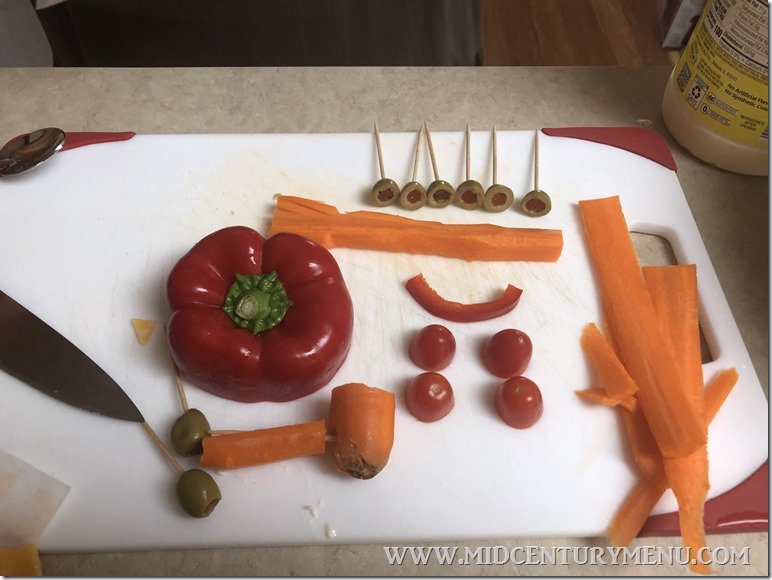 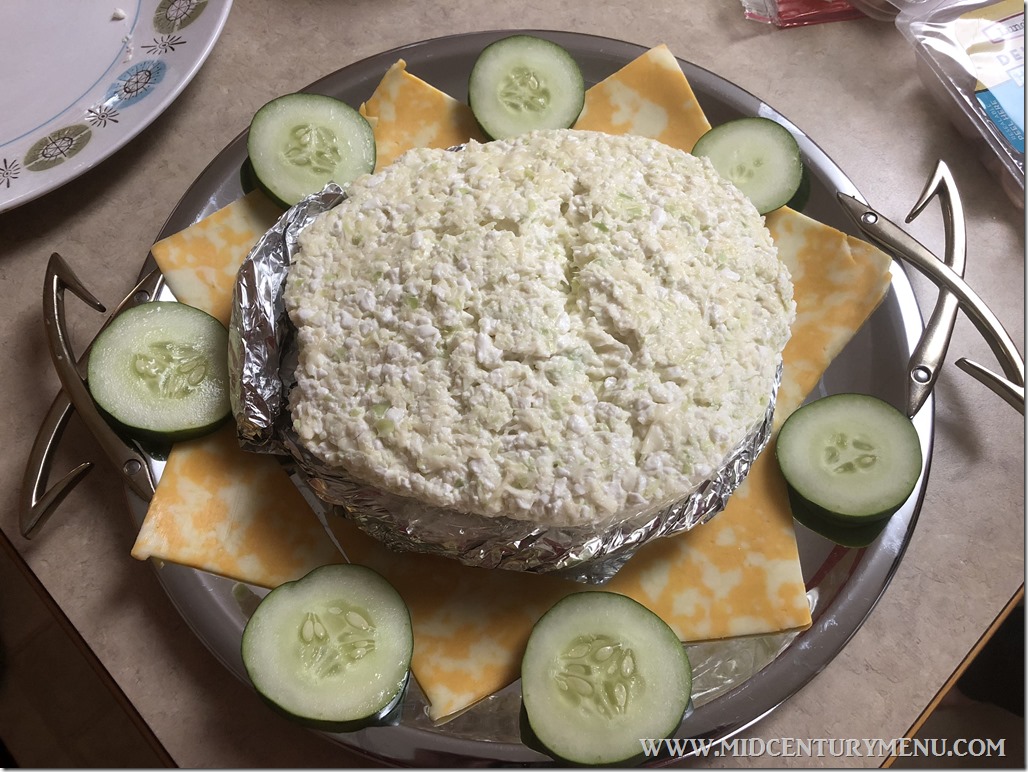 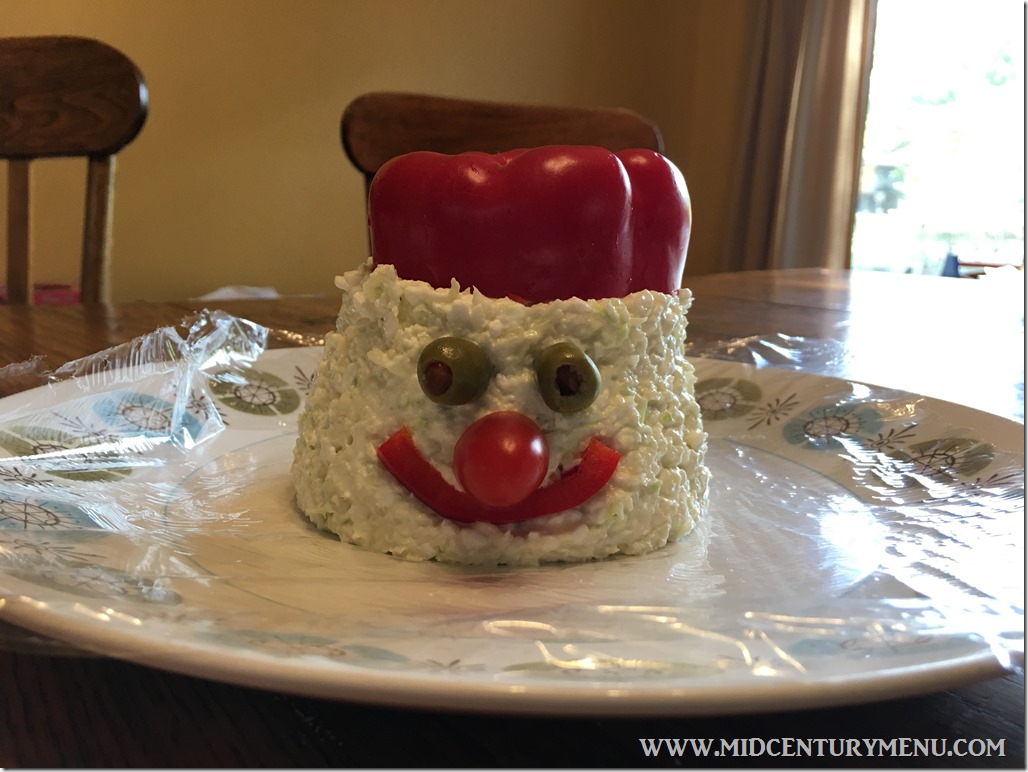 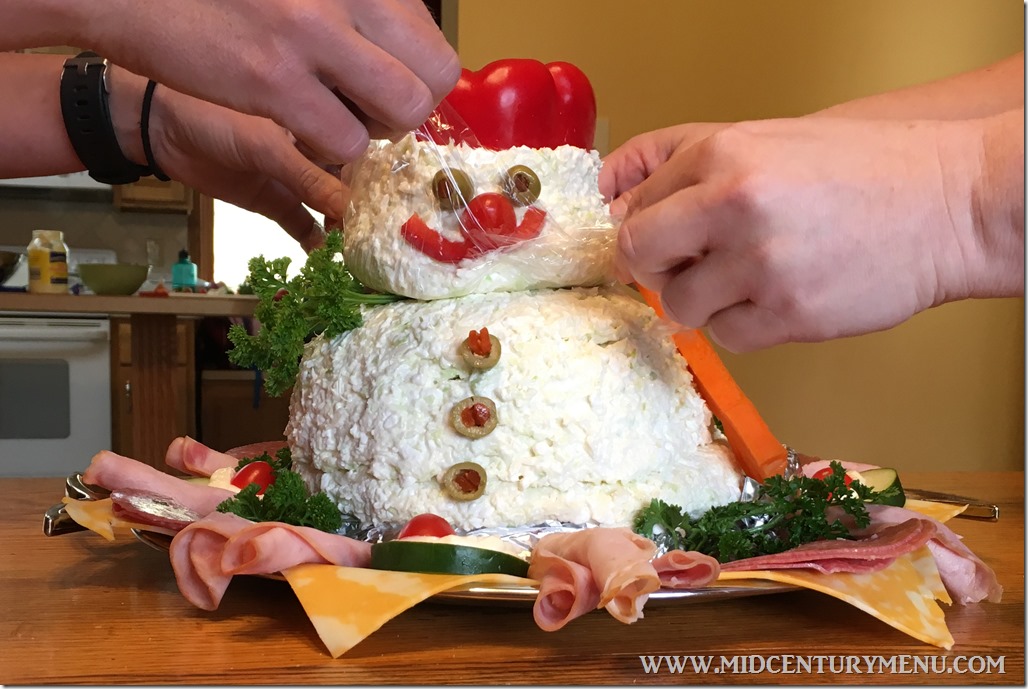 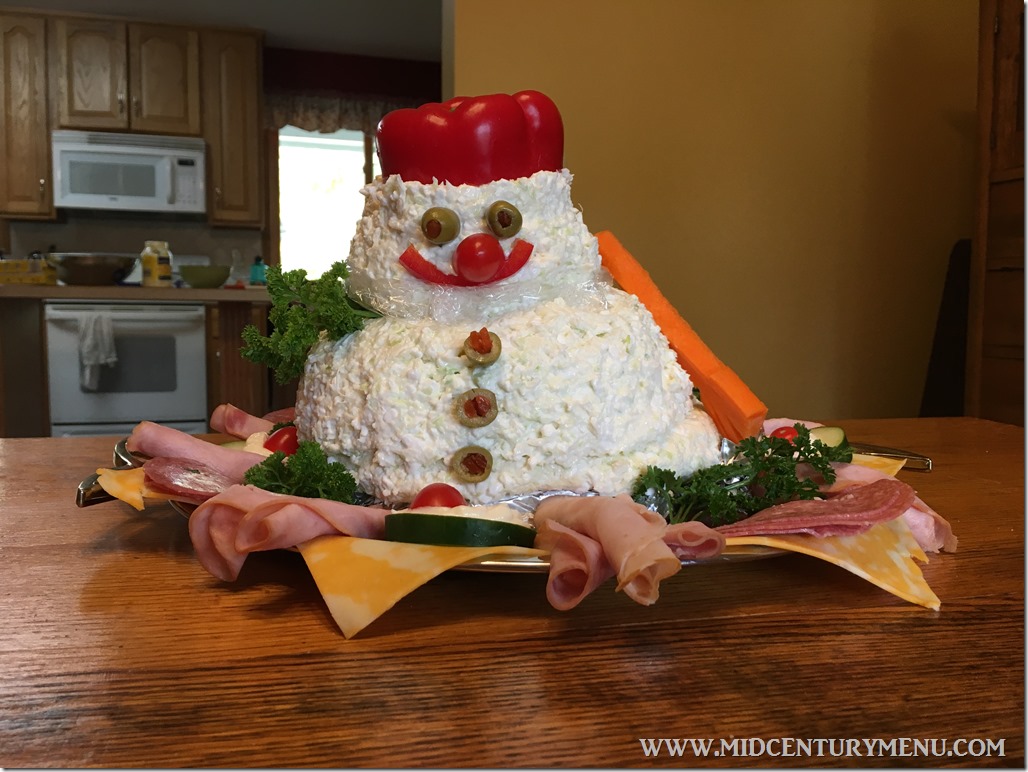 Frosty, the terrifying Slaw Man, was no more. The gelatin mixture was NOT enough to hold him together for longer than 5 minutes. 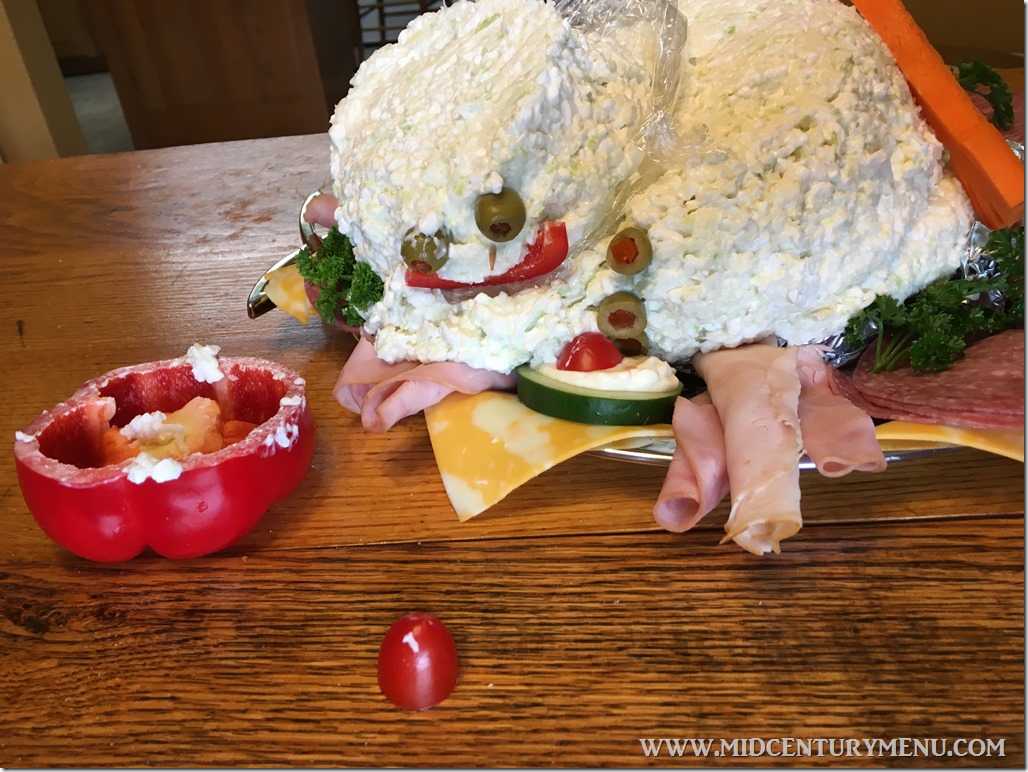 All that remained was to “Taste him” and see if the heart of not-Hellmann’s was any good. 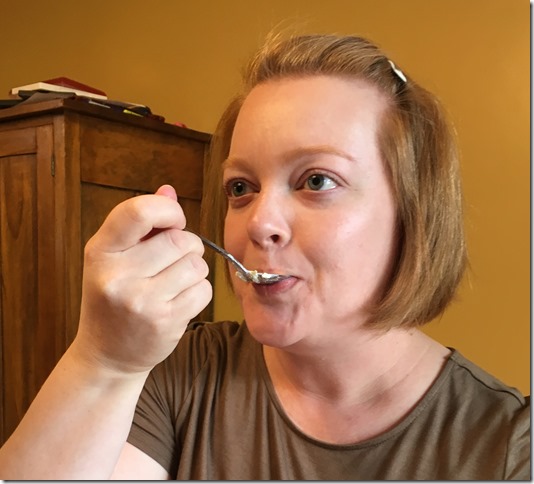 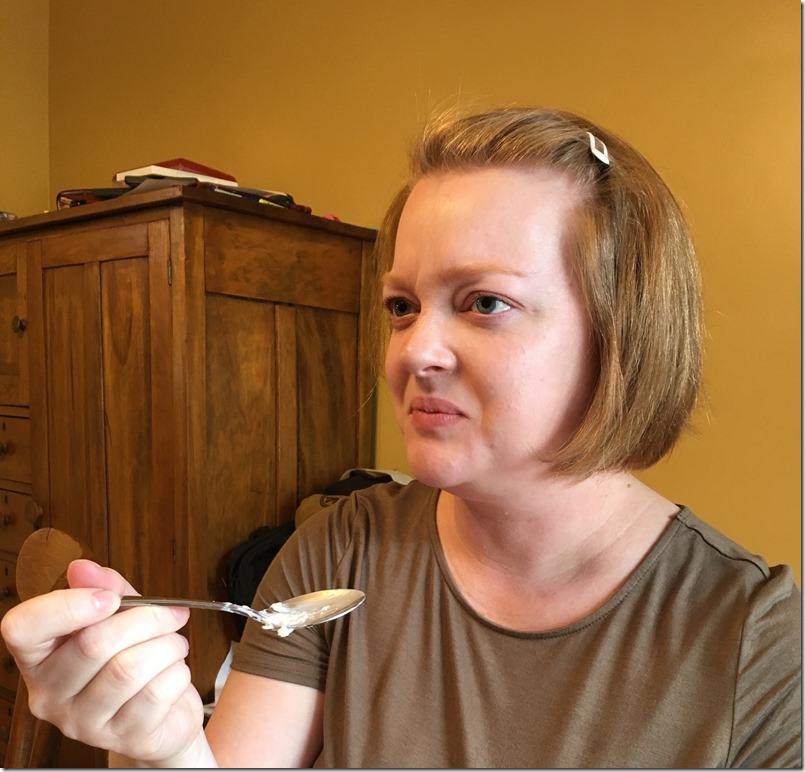 “This is not anything special. It just tastes like cottage cheese and cabbage.”

Despite the hilarious presentation and major gelatin fail, this ended up being kind of a dud. It really didn’t taste that funky, or even like anything, really. I mean, I suppose their goal was to let the mayo really take the show. So it does, and if you like mayo mixed with cabbage and cottage cheese as a side than this is your jam, my friend. I’m not being sarcastic. This wasn’t bad at all, it was totally edible but it just was plain. If you want a real side, I totally would make this out of potato salad.

In terms of the “melting”, I am pretty sure that modern cottage cheese is not as creamy as it used to be. Or maybe cottage cheese in Michigan is drier than in most states. Either way, I have run into this problem before with gelatin and cottage cheese together (here and here), and if your “salad” isn’t soupy enough, the darn thing is just not going to set at all. I remember pouring a great deal of liquid into my potato salad mold, basically making into potato soup and thinking that it was a huge mistake, but it actually ended up setting perfectly. What this guy needs is about 2 cups of extra liquid so that he can hold his shape. But I don’t know if I want to make Carolyn and crew do this again. They may rebel.