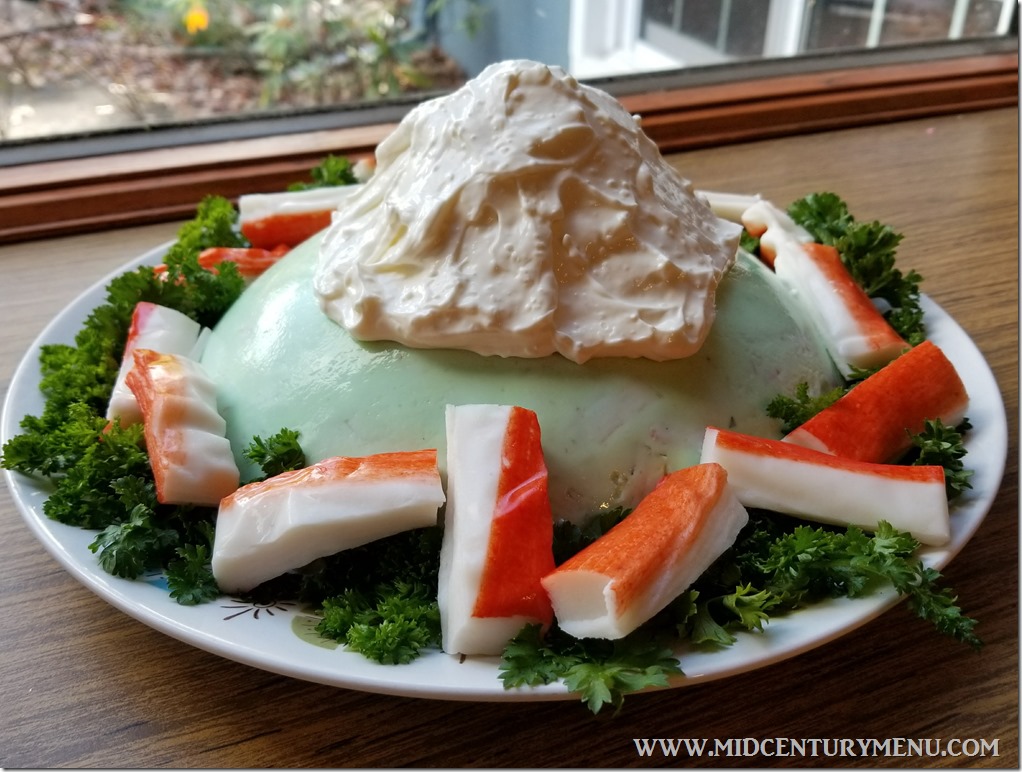 I have a rather serious unveiling this week. A serious gelatin mold unveiling. This is how emotionally invested in this I really am. 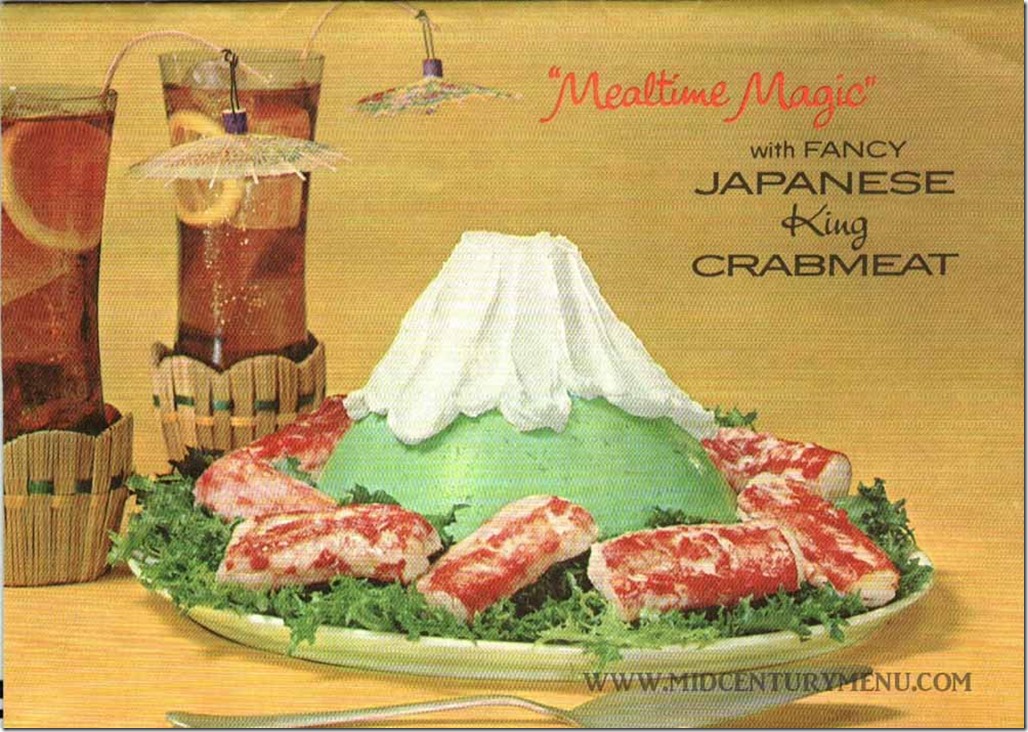 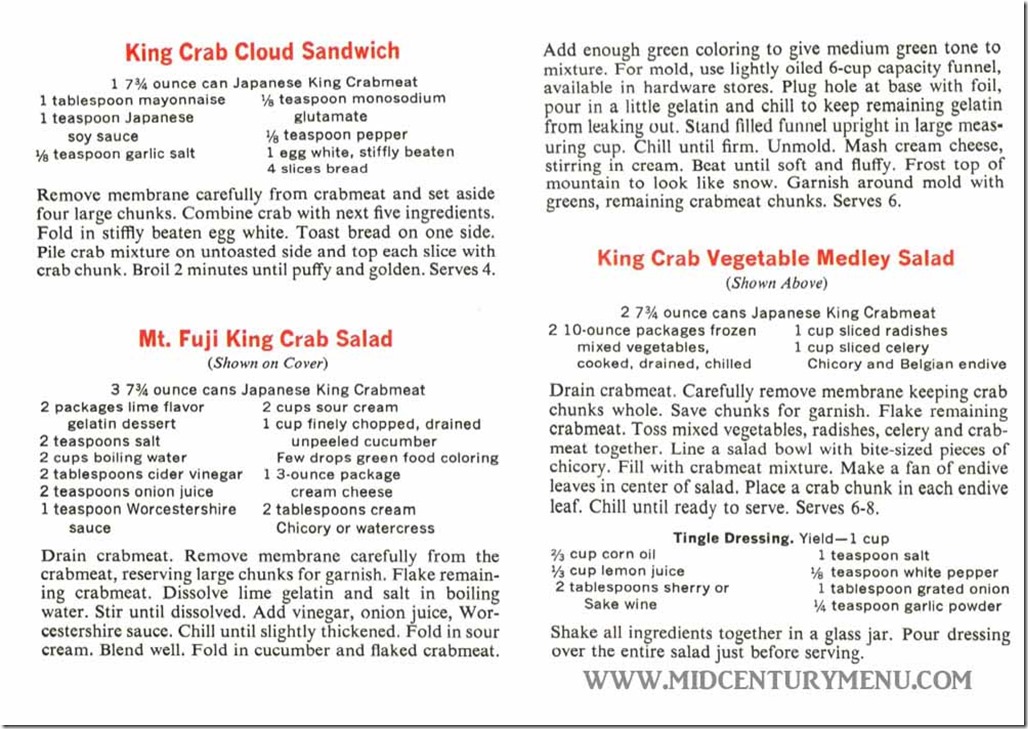 Can you believe this thing? I can’t. I saw this cookbook and just about lost my mind. Talk about upping your gelatin game.

“I’m bringing an Under The Sea Salad mold to the party on Friday night, Judy. What are you bringing?”

Now that is a mid-century mike drop. 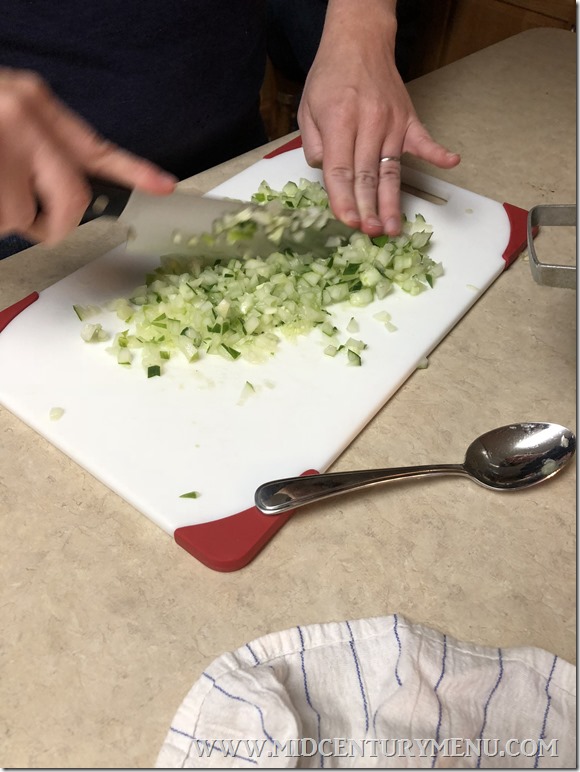 Anyway, I was lucky enough to discover this little wonder right before Halloween, which was fortunate because my friend Carolyn was having her annual get together with her friends, and they needed another insane craft project to reproduce while drinking. They were the ones responsible for last year’s epic Aquarium Gelatin, so I thought this (and another insane gelatin project that will be revealed at Christmas) would be perfect for them. 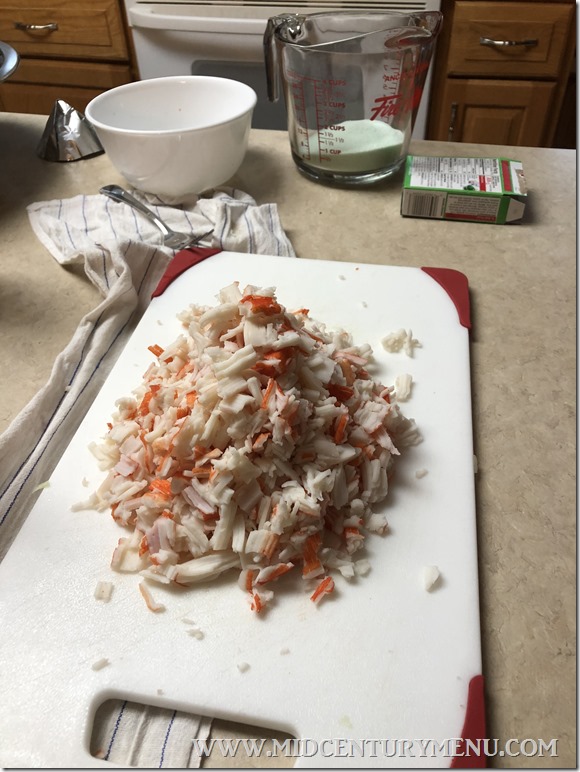 As they did last year, they leapt at the chance to play with gelatin on a grand scale. A mountainous grand scale. And they did it with a lot of alcohol and only the minimum loud complaining about how bad the gelatin mixture smelled.

Also, in a move I did not disagree with, they decided to use fake krab rather than real crab. And then proceeded to tediously shred it into little pieces. I was told this took forever. 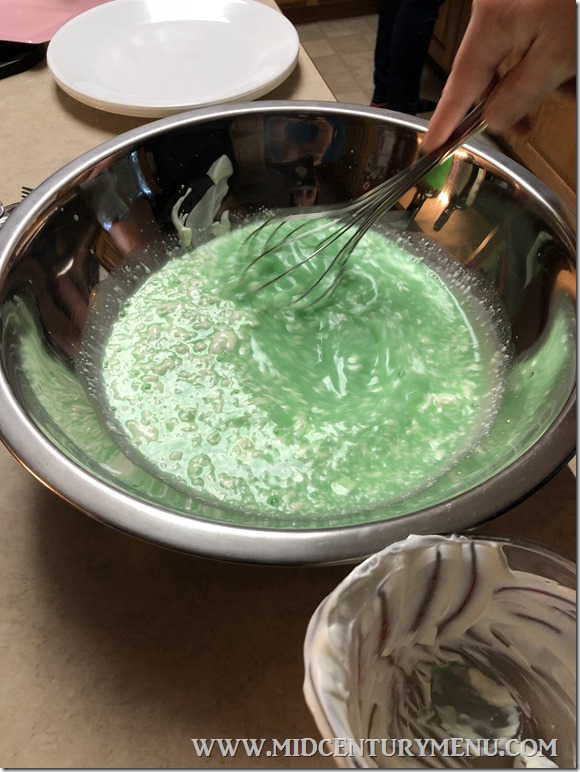 Look at that gentle whisking. 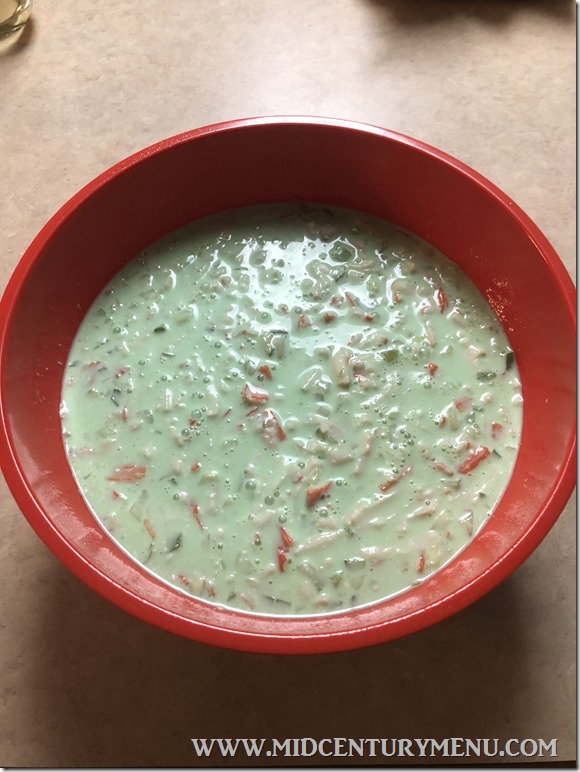 I was told at this point that the smell was intense and very, very bad. They also did not add additional food coloring. That is just…the normal color. Fun. 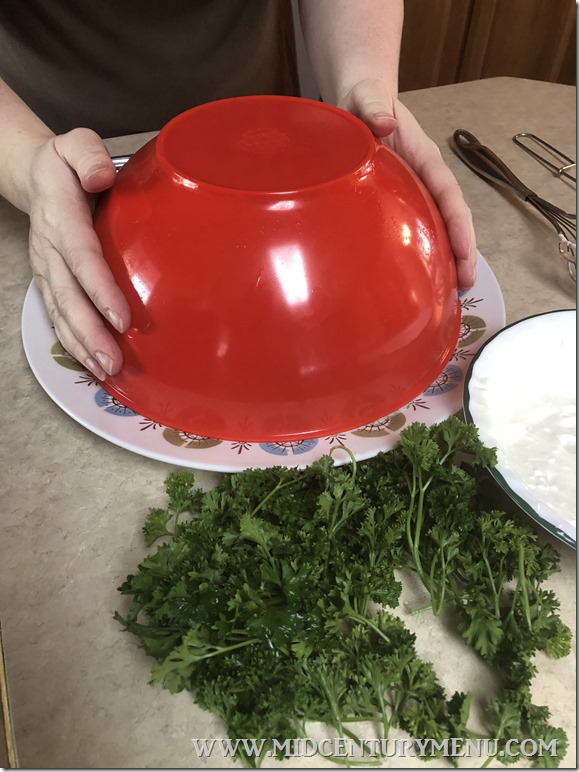 So, another byproduct of having scientists do projects and drink is that they start getting too involved in minutia. It was decided that since Mt. Fuji was big, the gelatin mold should also be big. It was also decided that the funnel I had procured was too small for a big mountain like Mt. Fuji. Also, there was too much potential for gelatin loss if they couldn’t get the seal at the neck end of the funnel just right.

The decision was made to make it in a large bowl instead of the funnel. 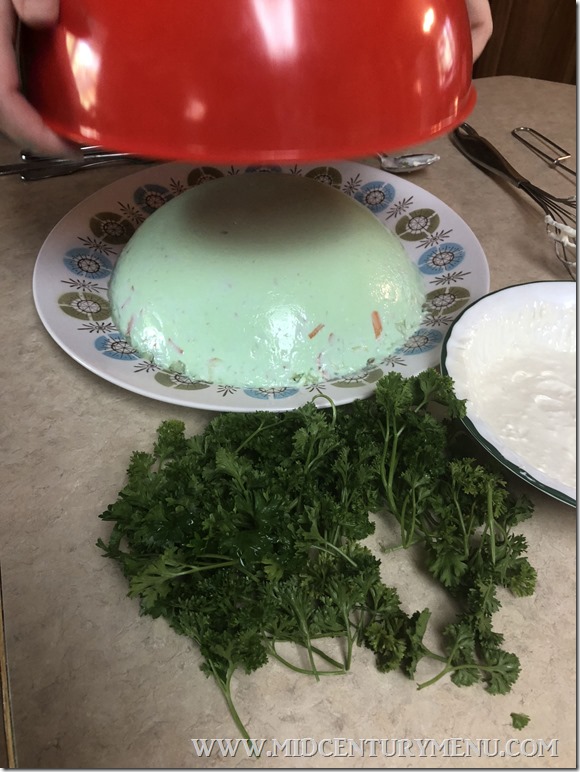 I was a little sad, because I wanted to make the gelatin in the funnel, but I understood their decision. But now we had the issue of the top to deal with. 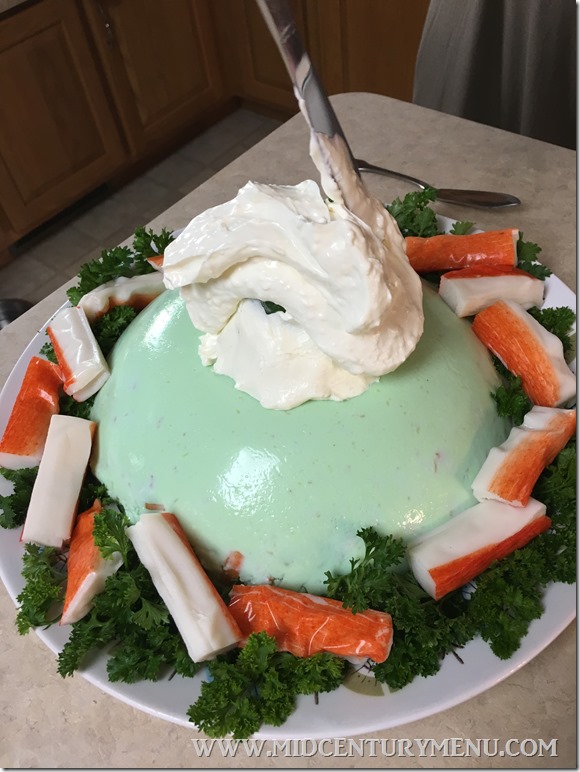 We went with some fancy cream cheese sculpting over a piece of cucumber that we then covered with more cream cheese. I think the look came together pretty well. 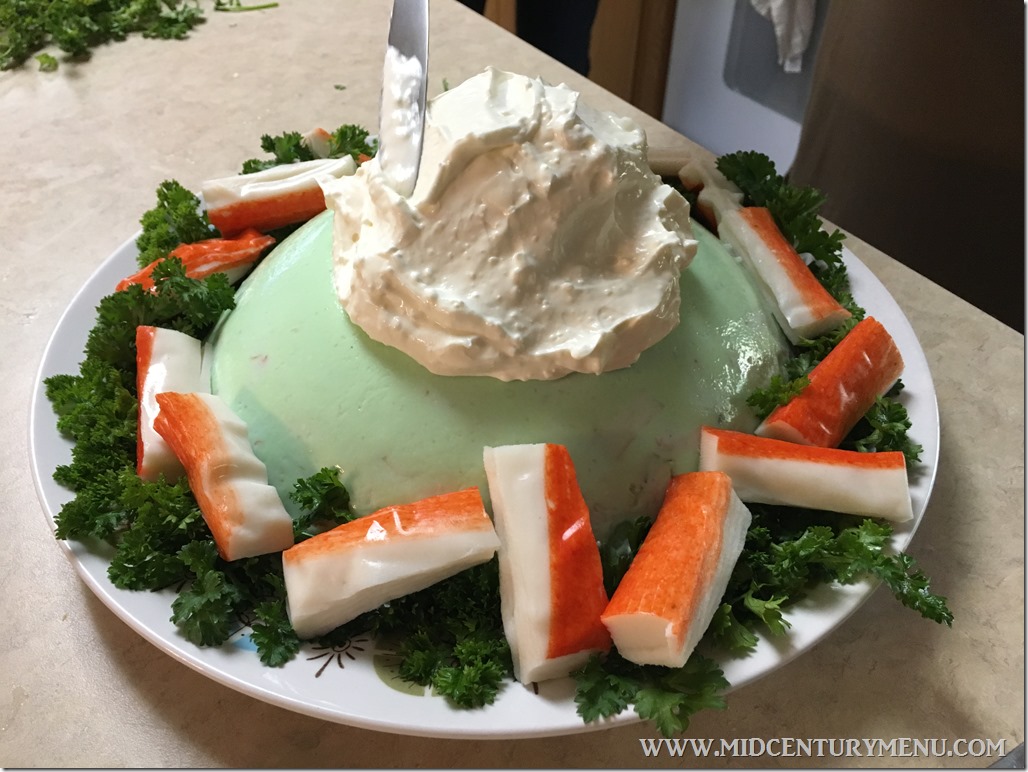 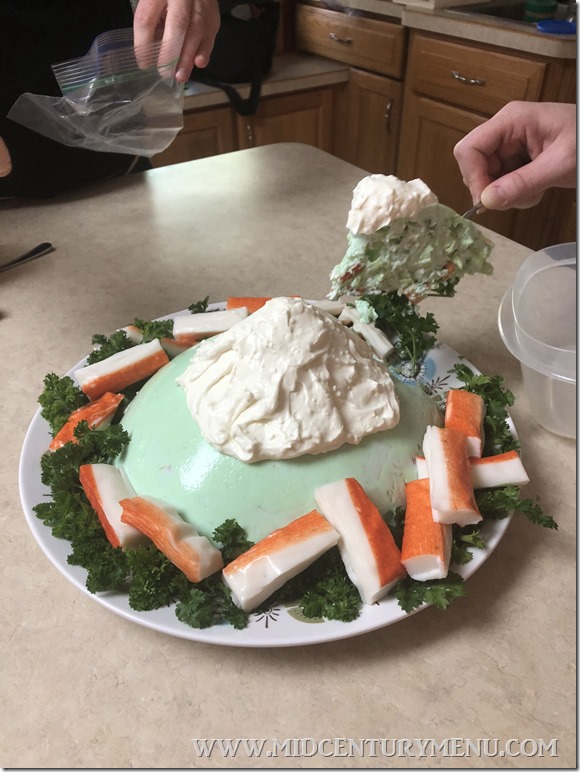 And, a cross-section in case you were interested. It actually set up very well! And it was pretty. At least to me.

Now, we just had to release it where it would do the most damage. 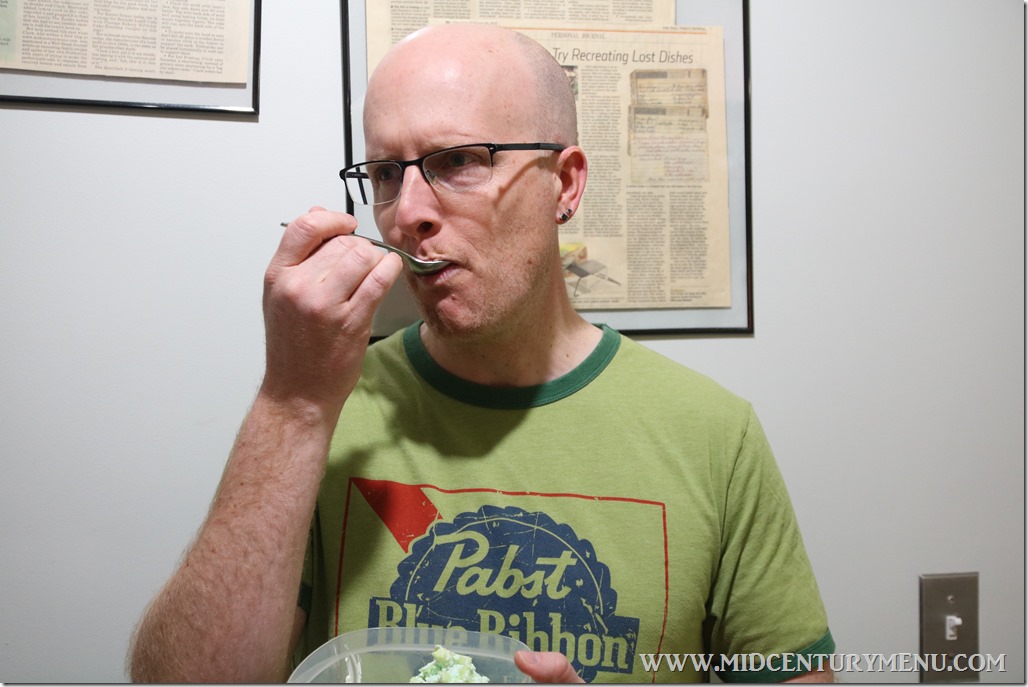 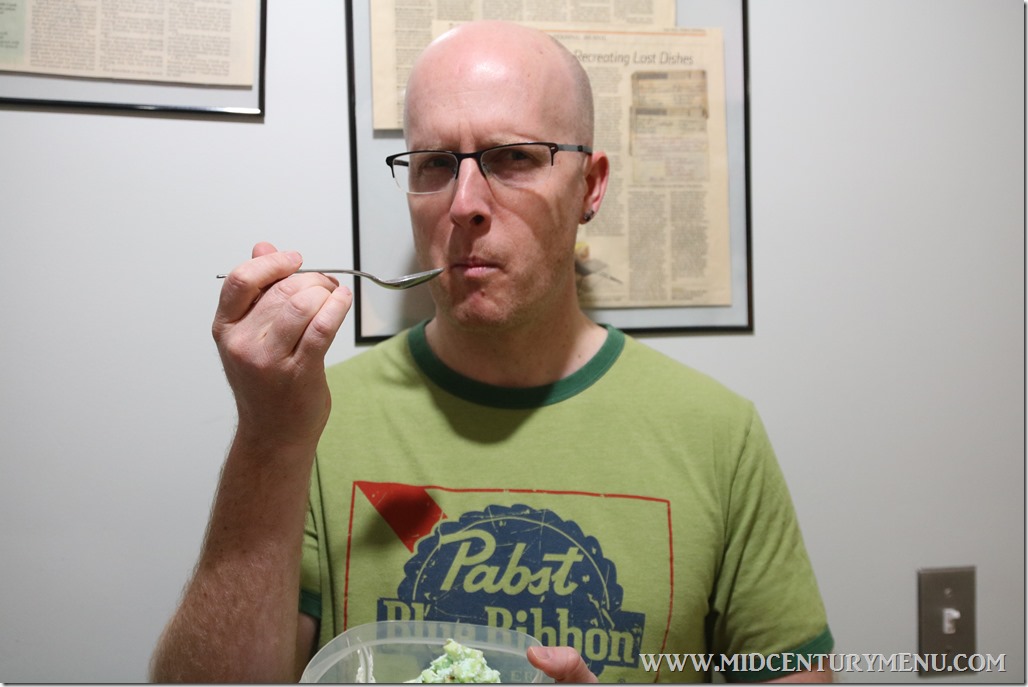 “I know, you could tell by the smell. Is it the fake crab?”

Of course, this was way too sweet. I mean, the basis is dessert gelatin, so of course it was. The fake crab actually helped tie the flavor together into something that you could actually eat. The whole thing ended up tasting a bit like a really sweet tartar sauce with fake crab bits floating in it. So, not gag-inducing, but who wants to eat gelatinized tartar sauce? Not me. Not even Tom. But Carolyn and her friends had a great time making it, and it ended up being a pretty easy gelatin and the finished product was pretty in a…green sort of way. This would be a fun one if you were having a dinner party where you wanted to simultaneously impress and horrify your guests so that they didn’t invite themselves over again. Like Thanksgiving.

And, here is a little bonus for you. Carolyn and I tasting it in her kitchen. We didn’t love it. 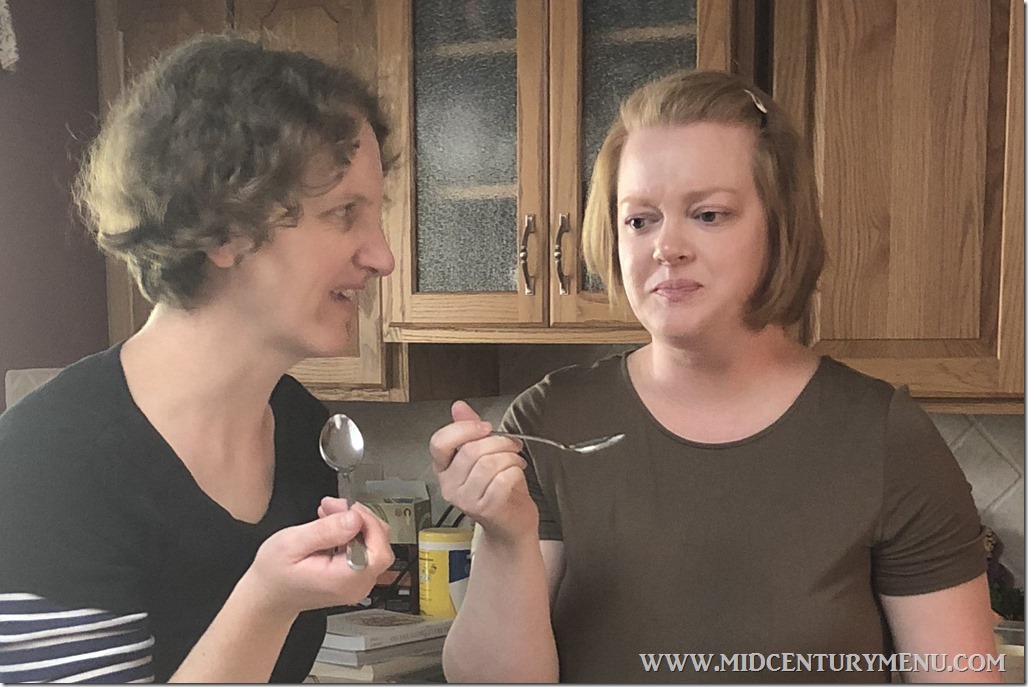