So, here is the plan: Tom and I are going to eat a TON of vintage appetizers on New Year’s Eve.

What do you think? Good plan?

This plan has been…oh…several weeks in the making. Originally, I was going to post a vintage appetizer a week for twelve weeks, but when that plan fell through due to my crappy food-planning skills and Tom deciding that Pork Cake trumped all other plans, I decided to wing it. So, instead of twelve posts you are only going to get like…four. But one of them is going to be of our rockin’ retro New Year’s Eve table, so it will all even out*.

But that’s okay. You know why? Because we have Party Cheese Ball! 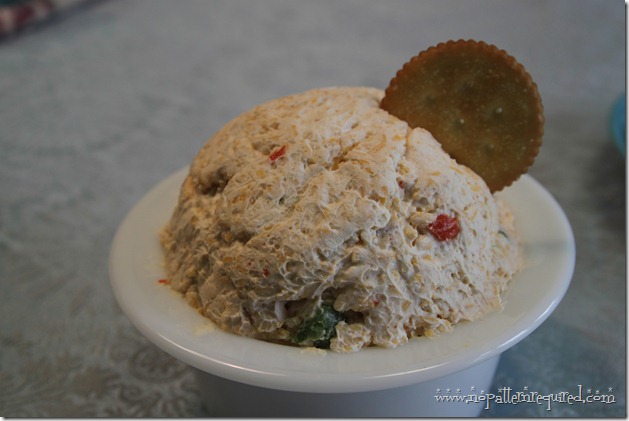 I have to admit that if I’d be lying if said I had any doubts about whether or not this cheese ball would be good. I KNOW it’s good. It’s freaking good. And it’s good every year at Christmas when my mom makes it. It’s the first thing to disappear off of her table and the last thing we stop talking about. But the magical thing about this post is that I found the recipe for it in a vintage pamphlet!

Why is this so amazing?  Well, it’s amazing because for years my mom has been winging it with the recipe. It was something my grandmother made during the holiday, but never wrote down, so my mom had to roll up her sleeves and recreate the recipe from scratch. There was a lot of experiments (which we were happy to eat) before she got it close enough to satisfy her, but I think she did a darn good job. Her recreated recipe is almost exactly the same as this one I found in the Good Food Ideas from The Kraft Kitchens pamphlet from 1971. The only difference was that my mom used red and green bell peppers instead of green bell pepper and pimiento. 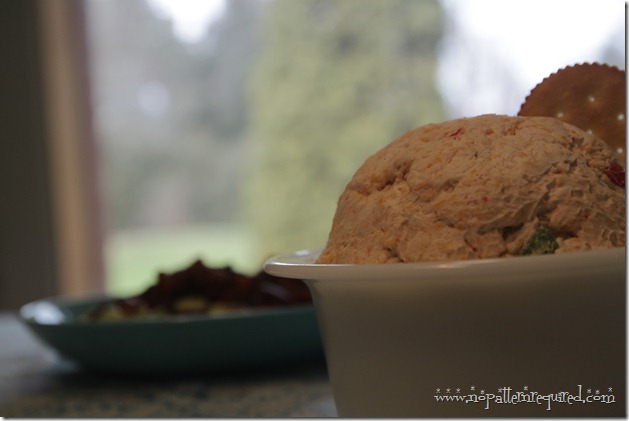 So, to kind of make up for the fact that I am not posting as many appetizers as originally planned, I thought I would give you one really good vintage one, one fool-proof recipe that you can add to your New Year’s Eve table this year and not be ashamed to say that it is a retro recipe.

But just wait until people try it before you tell them that it retro. Whenever I tell anyone that what they are eating was featured on the Mid-Century Menu, they slowly lower their bite and look at it suspiciously, as if they are expecting to find mid-century mold or something. Wait until they eat a couple bites and they are hooked. Then tell them.

However, even though we know this one is a winner, this just wouldn’t be the MCMenu unless I showed Tom stuffing his gourd. 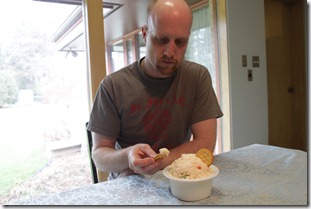 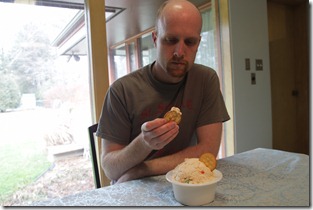 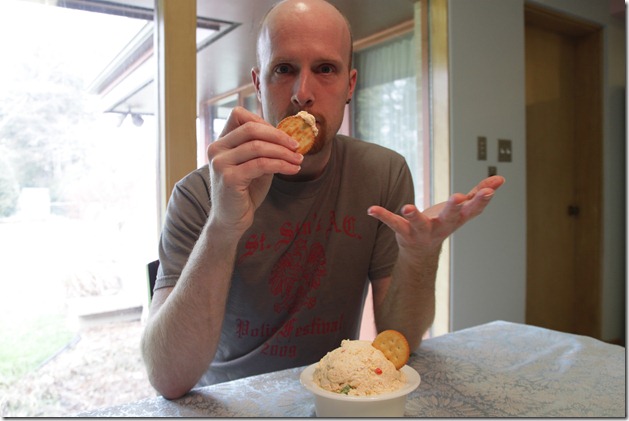 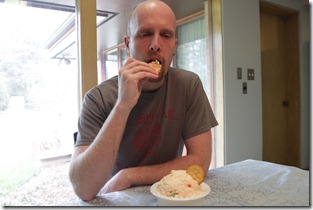 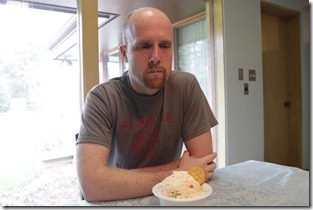 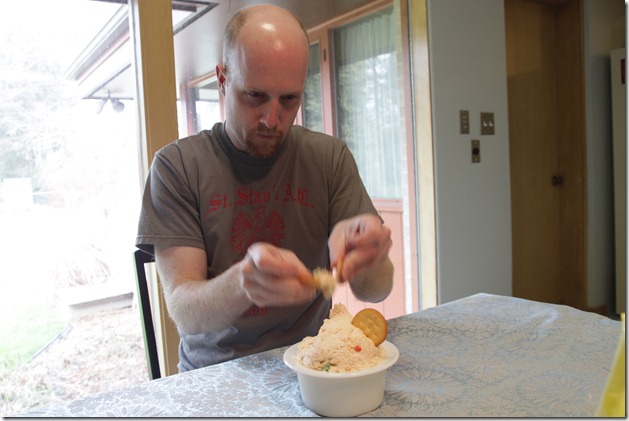 It’s recommended that you use two hands when eating Party Cheese Ball. It shovels in faster that way.

The Verdict: Really, really good! The cheddar kind of melts into the cream cheese and is just yummy, and the bits of green pepper and onion add a nice crispness to it. Best with Ritz crackers and is a great retro addition to a party table!