Bologna And Prune Sandwich, 1958 –Back To School With Mid-Century Menu 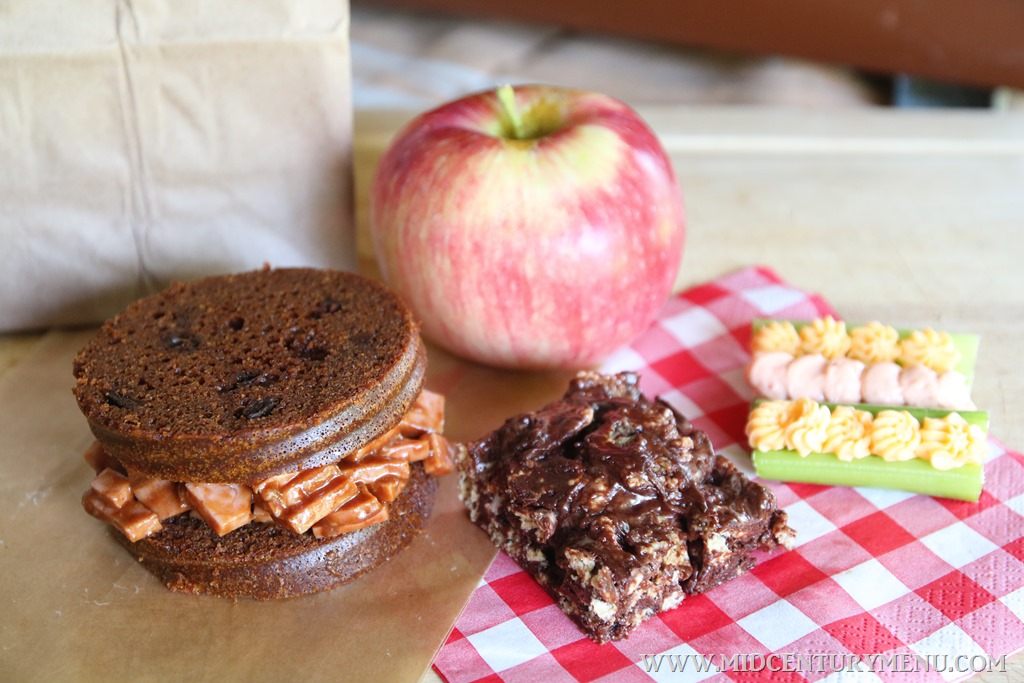 It is officially school time again! Alex will be headed back to pre-school soon, and I am sure most of the kids out there are already back in school. And to help your little ones concentrate and be their best, I’ve dug out some mid-century lunches for you to whip up for them! Here is the first of three fab fun lunches that I threw together to celebrate school! 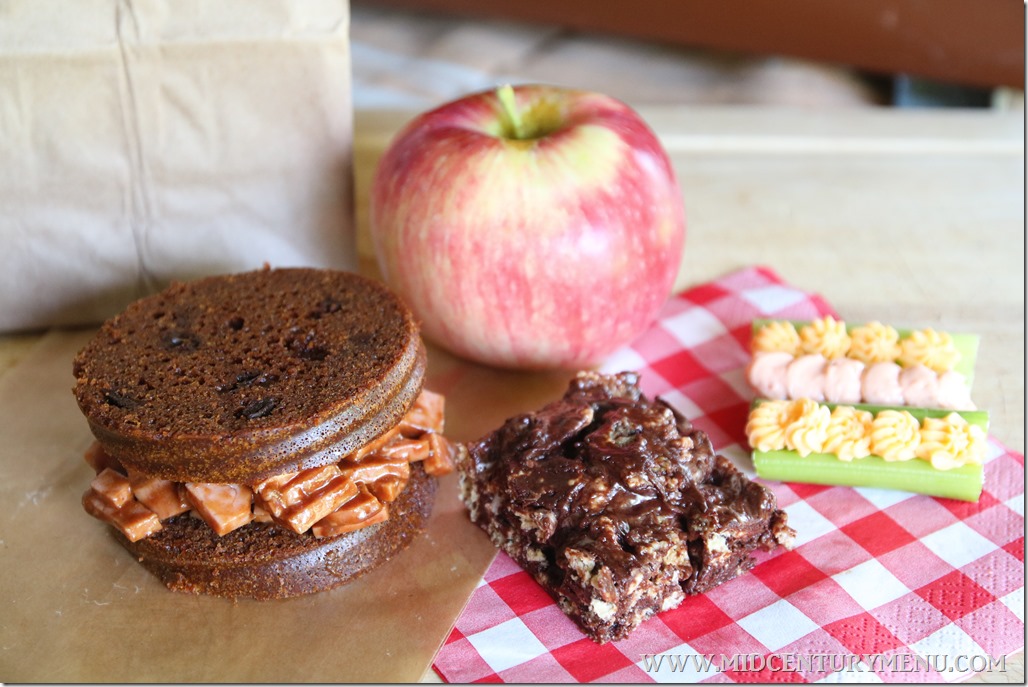 We have a bologna and prune baby food sandwich on brown bread, Chocolate Dreams, some celery and cheese and an apple.

This recipe comes from 101 Quick Lunches With Oscar Mayer from 1958, Sandwiches to Tote, Variation One. There are lots and lots of crazy sandwich combos, but this one really caught my eye.

Plus, since I have a baby, I have some extra prune baby food kicking around.

Now, this recipe also calls for Boston brown bread, which is a quick bread made with whole wheat and molasses that is steamed, usually in a coffee can. I could (and probably should) have made my own, but I happened to know that my local Kroger carried this kind of bread. 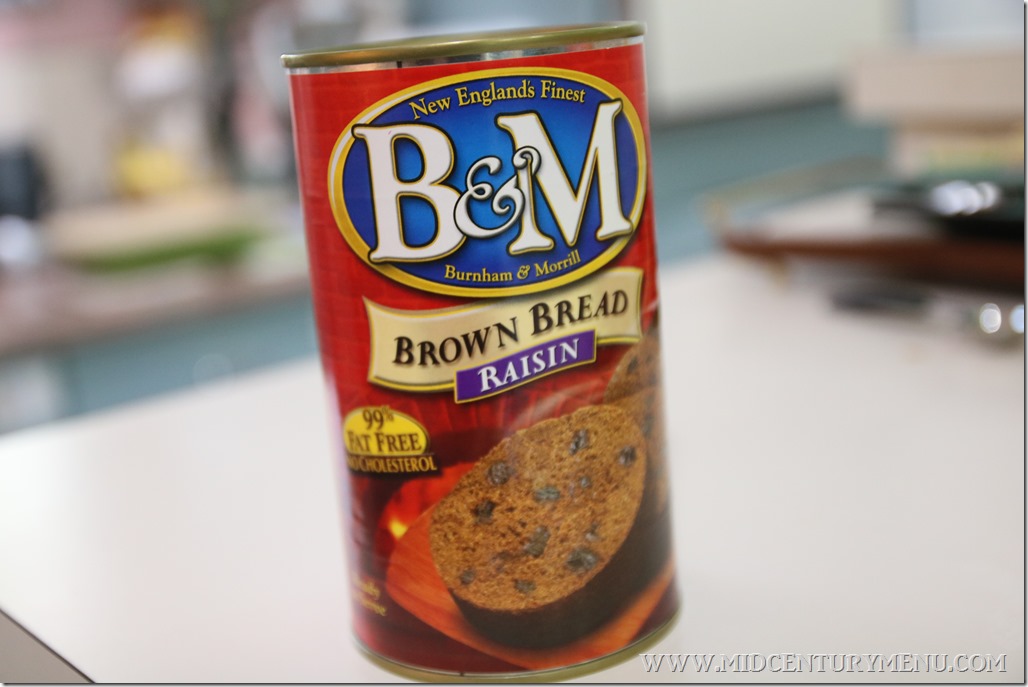 Yep, this bread comes canned. Unfortunately, they only had the raisin variety, but I figured since there was already baby food prunes on the bologna, a few raisins probably wouldn’t make that much of a difference. 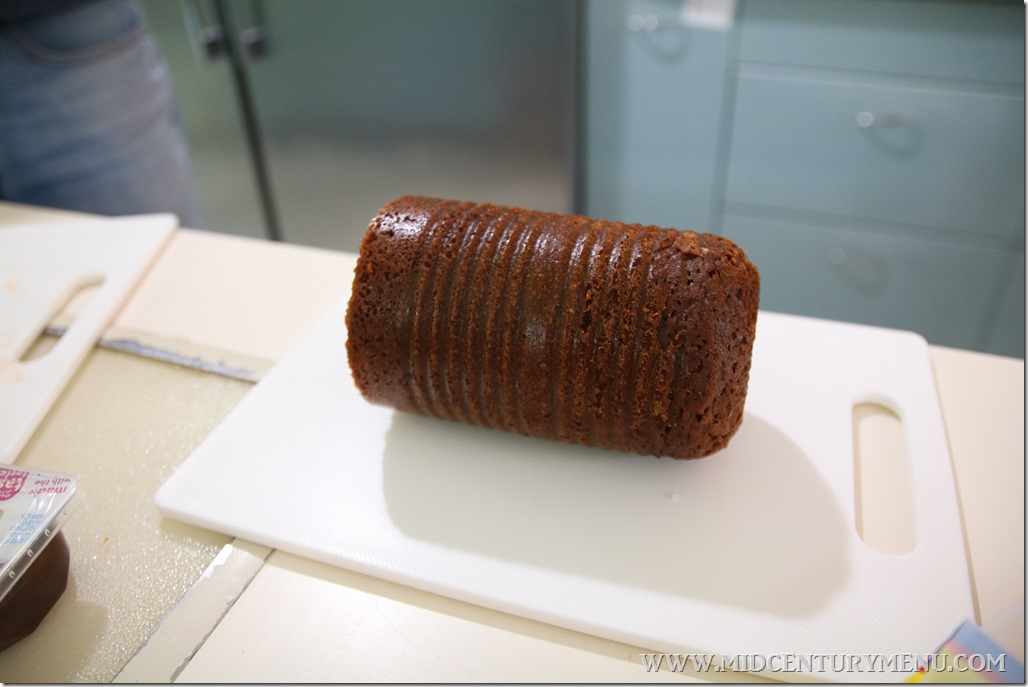 Now, according to some hasty internet research, this bread is usually served for Saturday night supper with baked beans and sausages. (If this isn’t right, someone chime in here.) Suddenly, the light at the end of the tunnel was visible. Since this is normally served with sausage, it should work with bologna. Right? Right? 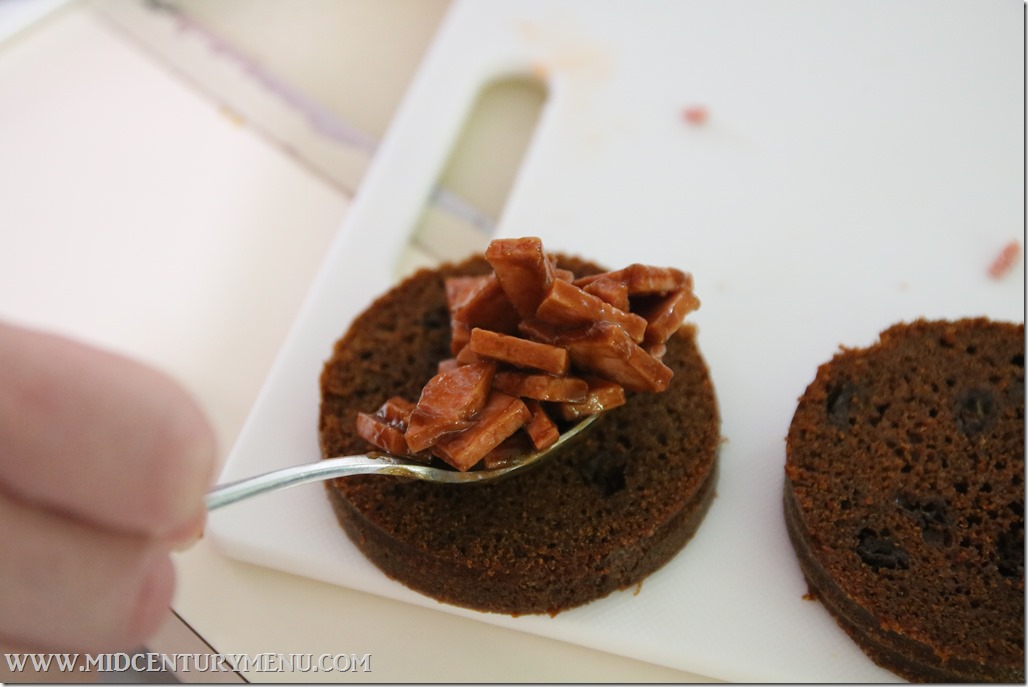 And, just as suddenly, the light is snuffed out.

This smelled so bad together. I felt sorry for the bread. 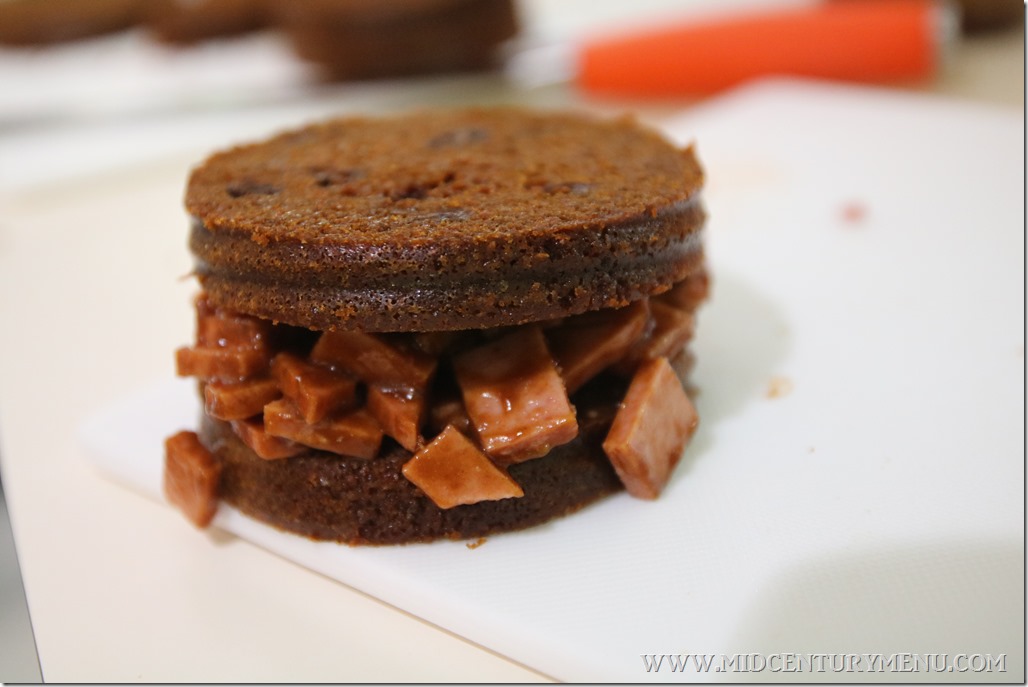 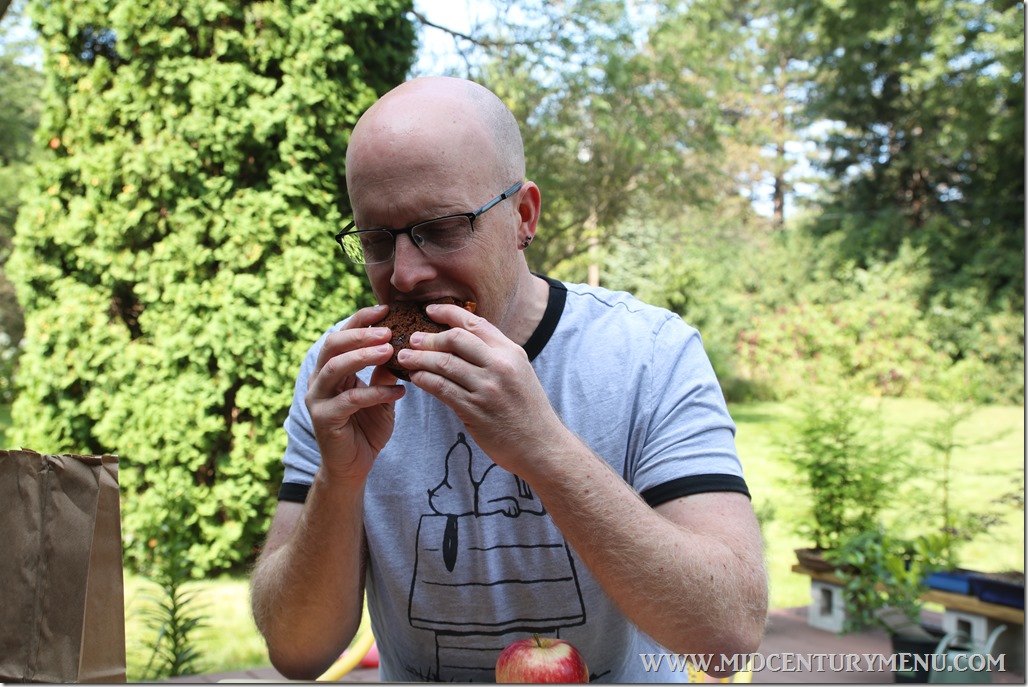 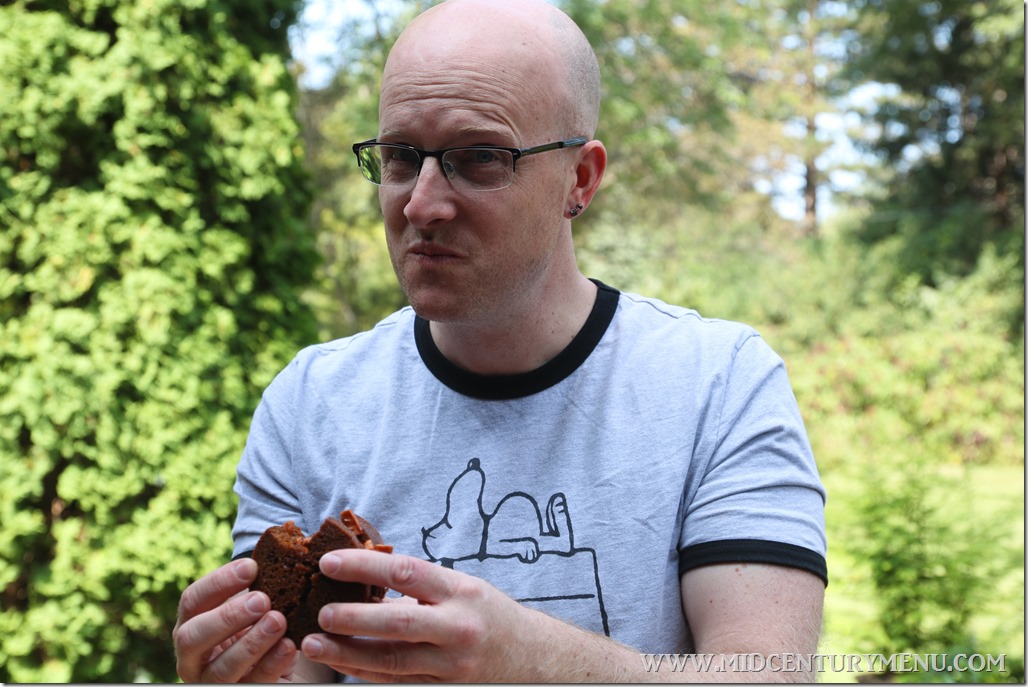 “Now, try to pretend that the bread doesn’t have raisins in it.”

“Okay. Can I also pretend that the bologna doesn’t have prunes in it?”

“This is the wrong combination of everything.”

Usually we try to temper our criticism of what we are eating with sprinkles of praise, but we just couldn’t for this one.  None of this went together. While we can take ownership of the fact that there were raisins in the brown bread, the absolute worst of this was the prunes and bologna. Baby food prunes do not go with bologna. Baby food prunes do NOT go with bologna. I thought perhaps this just might work, since I have had meat dishes before with prunes and cinnamon in them, but no. No. Nope. No. No. When you took a bite, it was pretty much sweet, sweet, slimey, sweet. No flavors worked together on this one. At all.

Oh wait, I do have one bit of praise: I actually liked the canned bread. It had a strong molasses flavor that I enjoyed, and it was moist. That is all.