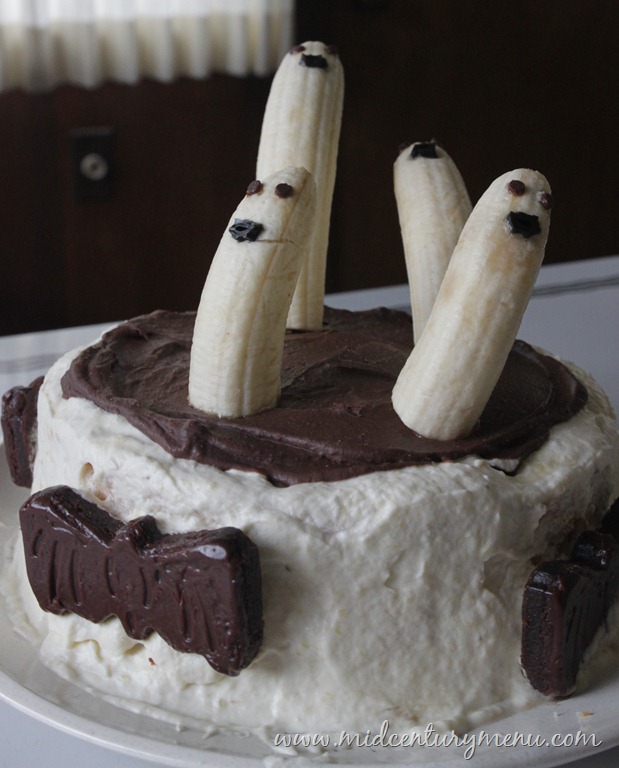 To keep the theme of freaky mid-century food going, I bring you the most hilarious cake we’ve ever made here on the blog: Banana Spook Cake. This thing is funny on so many levels, but mostly on the level of bananas sticking out of things. I mean, come on. Who can resist a cake with bananas sticking out of it? And the freakiest thing about this one was that it actually ended up being good!

In any case, enjoy this one!

I thought it would be appropriate if I told you all a Halloween tale today. This is a tale of mystery, magic, mashed bananas and heroism.

This is the tale of: 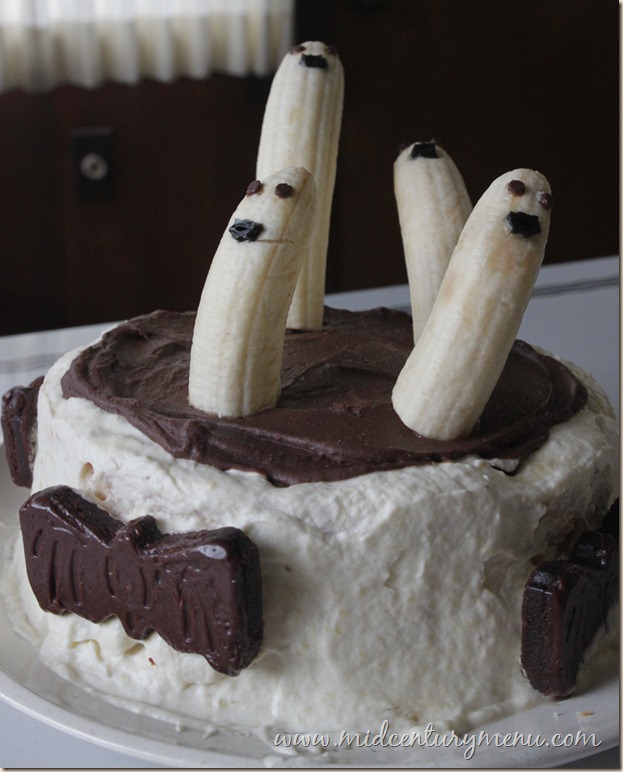 Once upon a time…

It was a typical weekday in a small town in Michigan. An unsuspecting girl walked into her local Salvation Army and, as she normally did, headed straight for the book section. The books were packed in and jumbled about, as they usually were, and the girl set to the task of combing through the mess to look for interesting books. There didn’t seem to be much of interest until she came across a beat up cookbook with no cover. It looked like it had seen better days, but because it was a vintage book she flipped through it anyway and was stunned when she came across a picture so strange, so inexplicable, that she could only stare. She was helpless against the power of the picture. 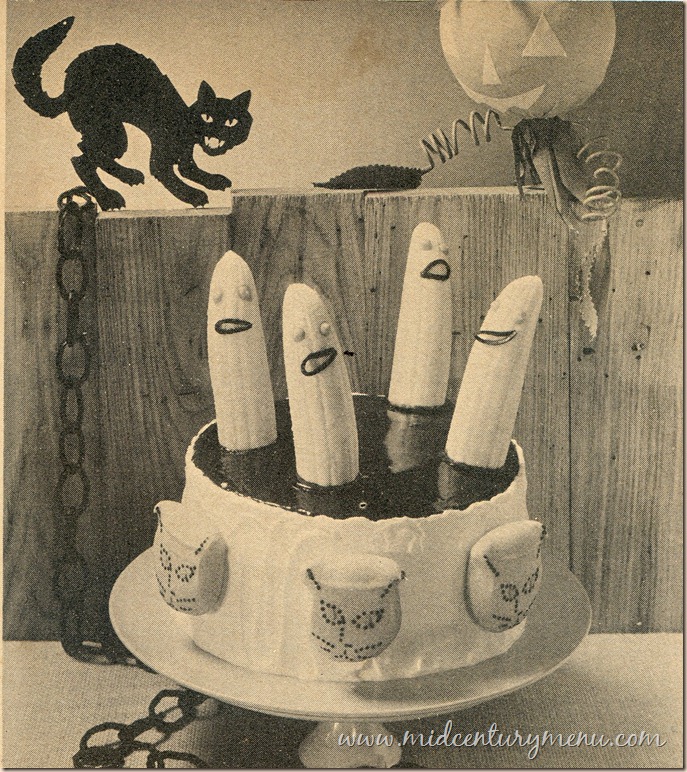 Make me, the girl heard a voice whisper.

She jumped and looked around, but there was no one standing next to her. She looked down again at the crazy picture.

“Hello?” she whispered back. “Did you say something?”

Make me, the picture of the cake said again. I’m full of bananas. Everyone loves bananas. The National Banana Association says so. 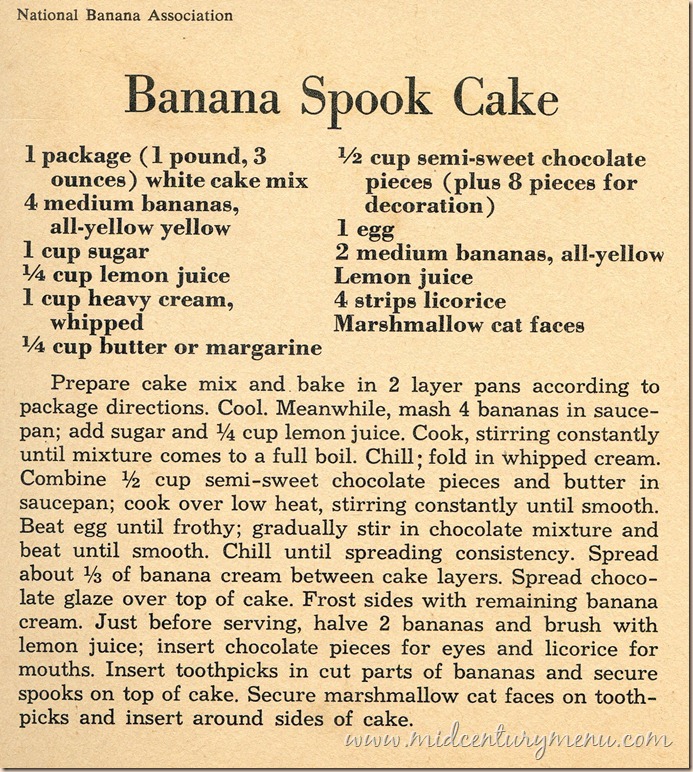 “Okay,” the girl found herself nodding her head, “I’ll do it.”

She turned and walked to the cash registers and bought the book without even looking at anything else. After she left, the clerk who checked her out wondered at her only buying one thing. Normally when the girl came in she bought bags of stuff.  But he just shrugged his shoulders and went back to work, knowing she would be back soon. 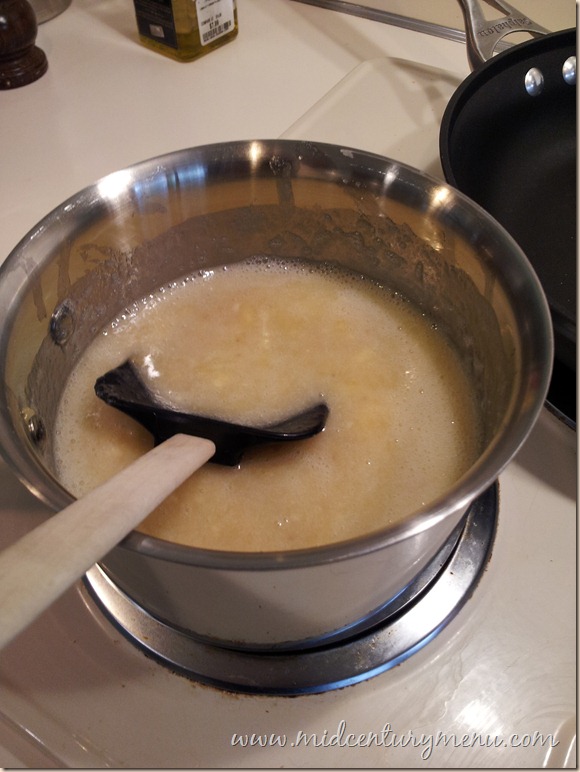 Back at her house, the girl put the cookbook with the strange picture on her shelf. But she didn’t stop thinking about the Banana Spook Cake. She saw it in her mind constantly during the day. She dreamed about it at night. She started eating bananas by the bunch, trying to drive away the desire to make the cake. 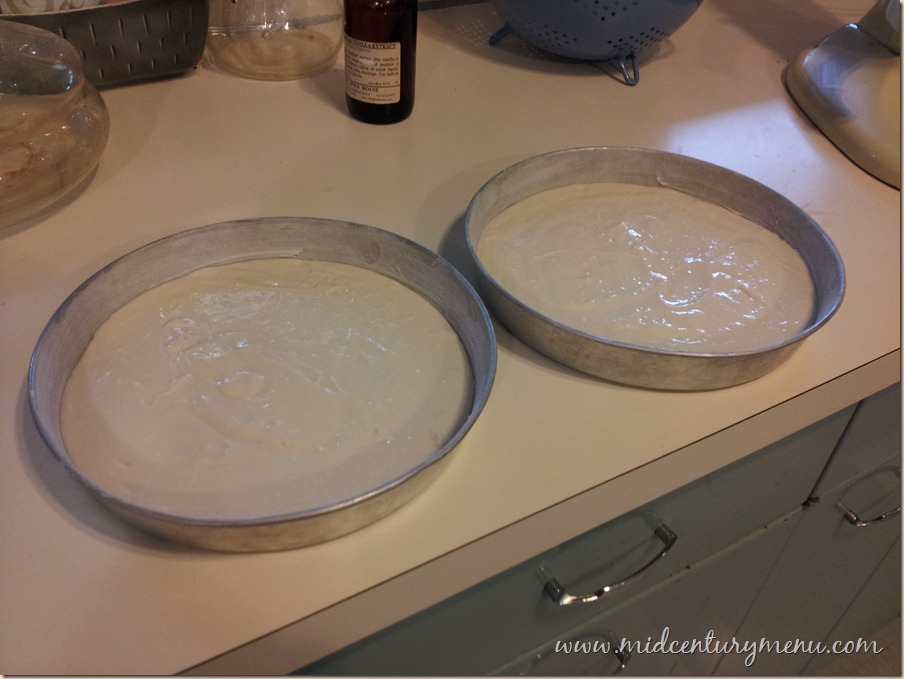 Then, right around Halloween, the girl’s mother came to her house for a visit. Anxious to share the picture with someone and to confess her obsession, she pulled the cookbook off the shelf. 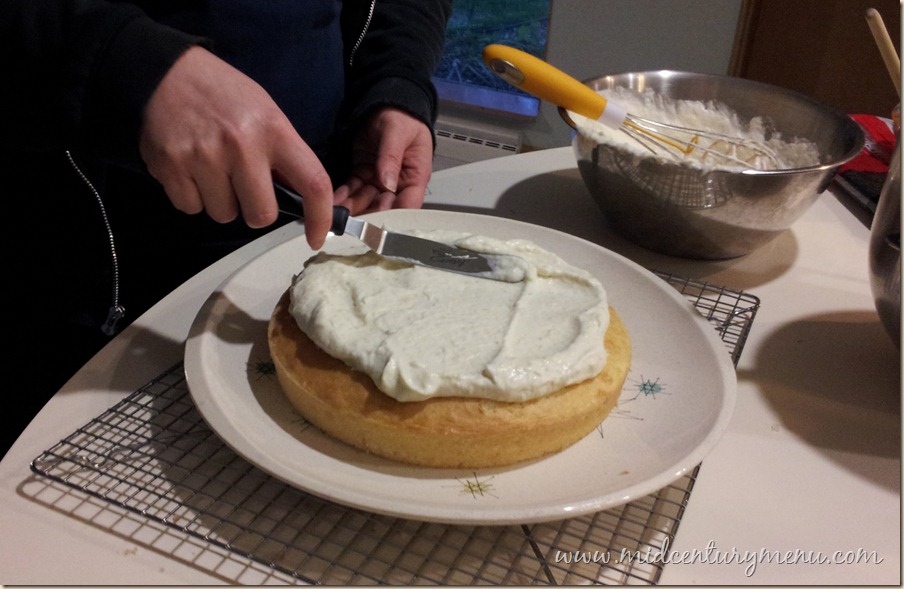 “Look at this,” she shoved the picture under her mother’s nose, “Have you ever seen anything so crazy?”

Her mother stared at it for a moment, transfixed as the girl had been. Then she visibly shook herself.

“I know, right? I am kind of obsessed with it.”

“I have kind of a crazy idea.”

“Yes!” The girl hugged her mother, the cookbook between them. “Let’s do it!” 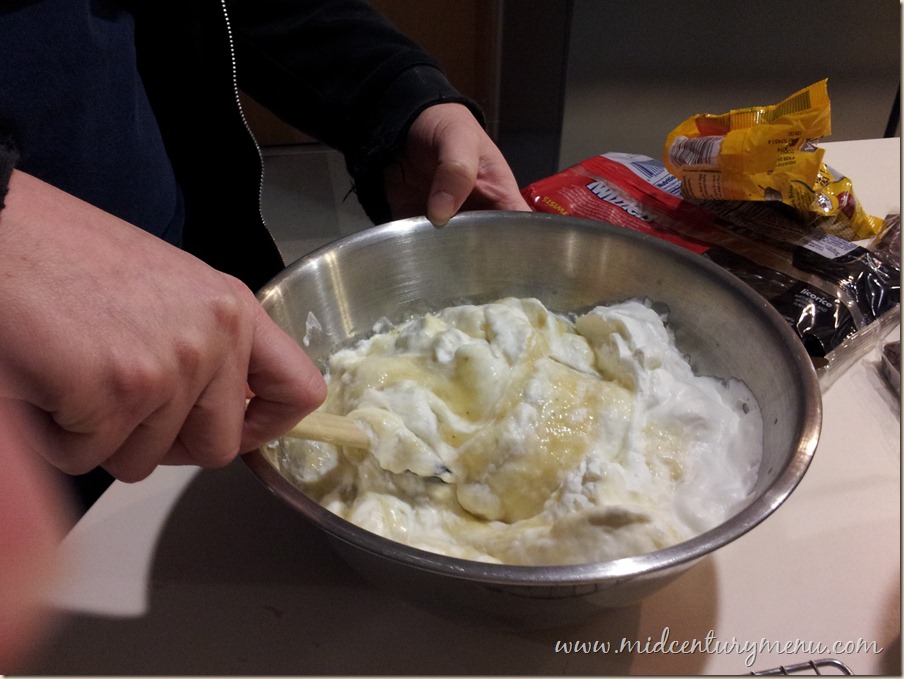 But right away, they knew that what they were doing was nuts. They had started way to late at night, so none of their pictures came out right. The cooking banana mash smelled like barf, and then like baby food. The frosting just would NOT come together. 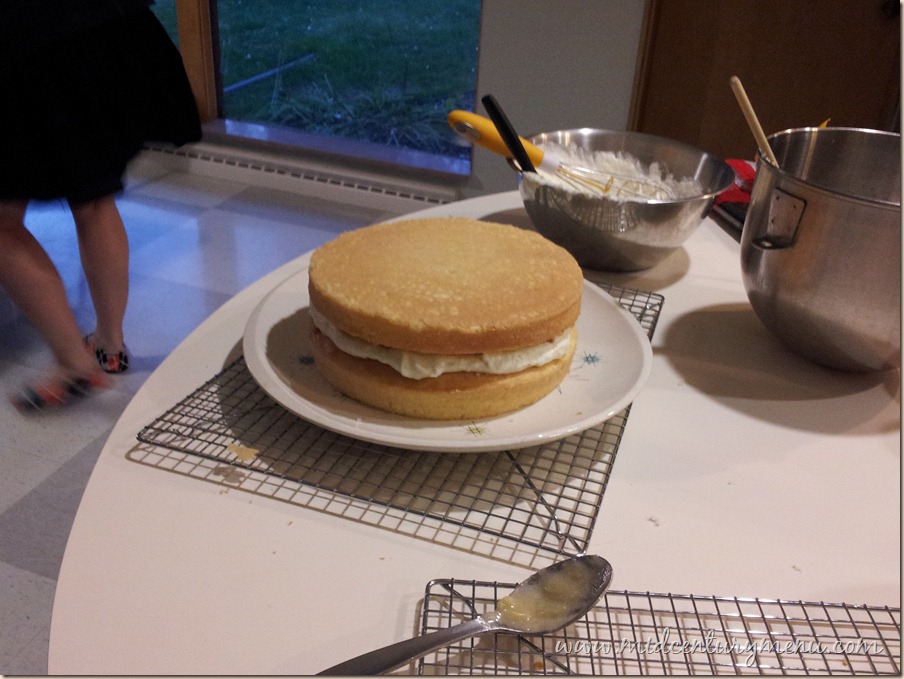 But they kept going, even when they were exhausted and knew they should stop. 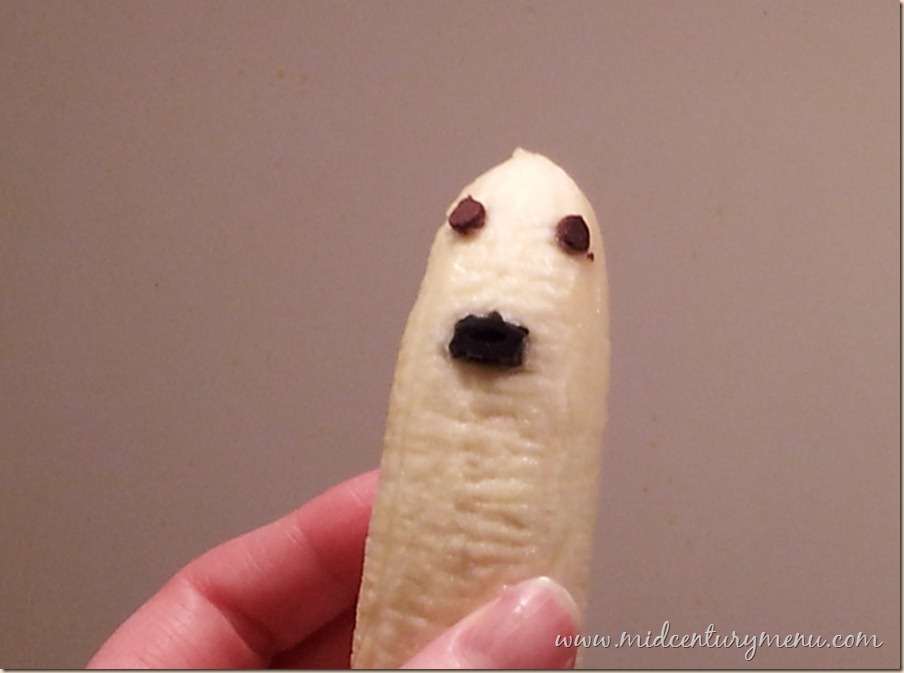 Even when the bananas grew eyes. 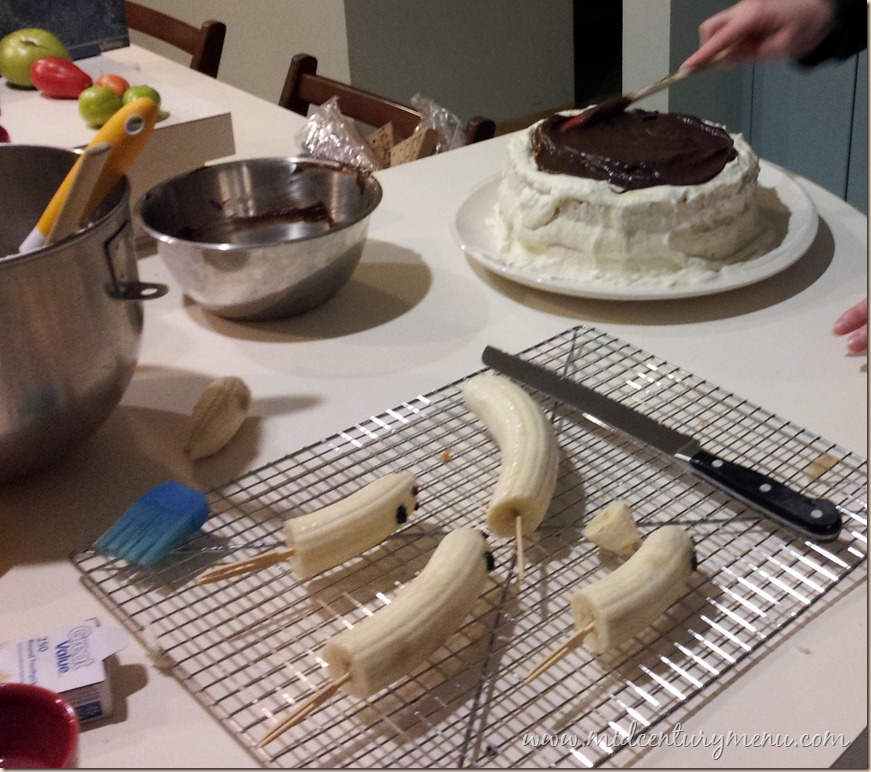 By now, they were dragging. It was horror trying to finish. The banana whip cream icing was sliding off the cake, so they had to refrigerate it between coats. The chocolate topping broke when they chilled it, leaving a slick of butter across the top. But they just beat it back together and kept going till the bitter end. 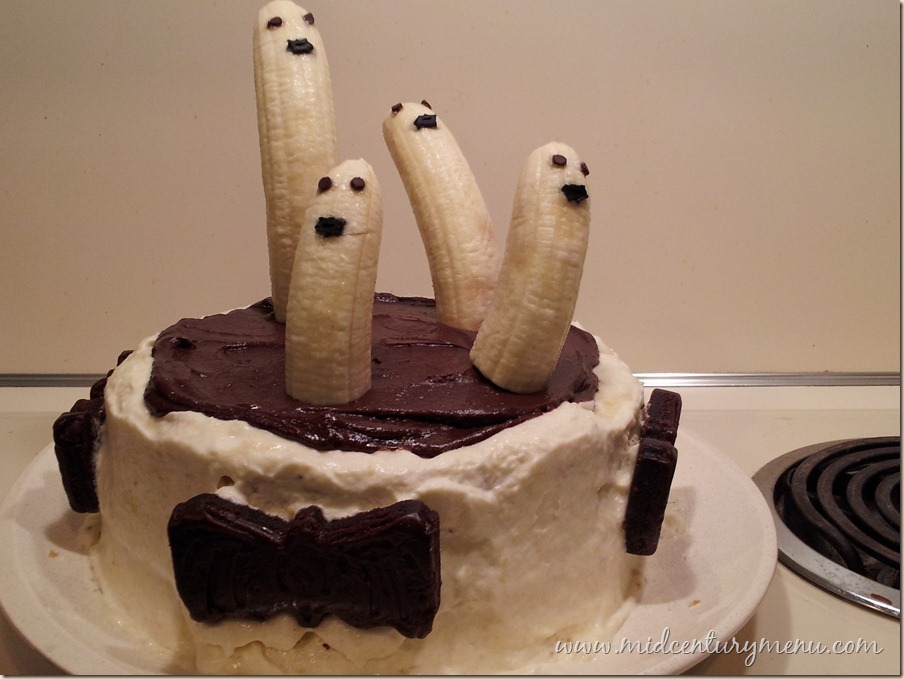 And then they looked at what they had made, and they were terrified. 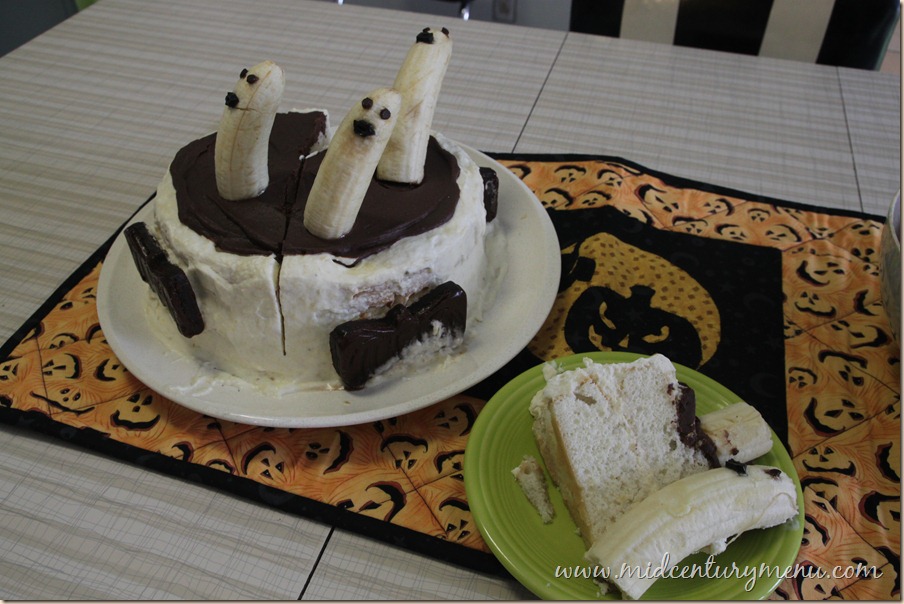 They knew it was evil, because sometime during the process the banana frosting started to smell good, like banana cream pie. And the faces that the bananas had grown were pretty darn adorable. They knew they had been brainwashed, and they knew they had been beaten. So they brought in outside help. Someone they could count on. Someone they knew had faced evil food before, and won. 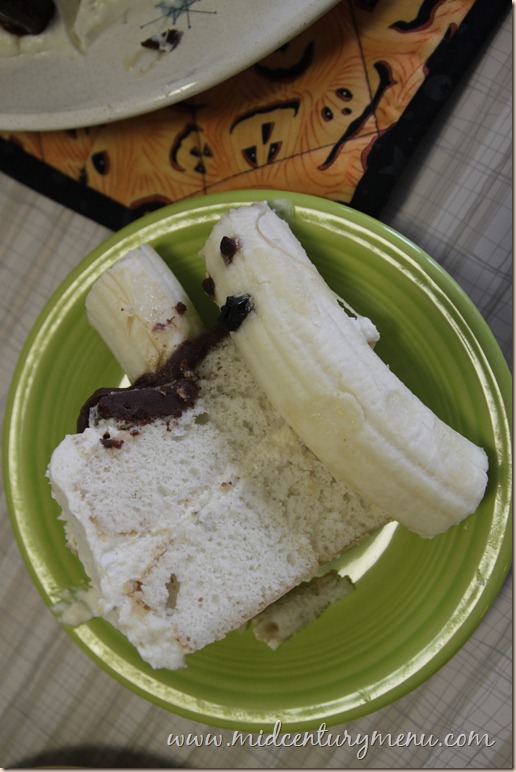 “What,” Tom said, “Have you idiots been doing?”

“I couldn’t help it.” I shrugged. “The picture whispered to me and told me to make it. It’s evil, I tell you.”

But, true to his heroic soul, Tom took on the Banana Spook Cake. He wasn’t afraid of the banana faces. 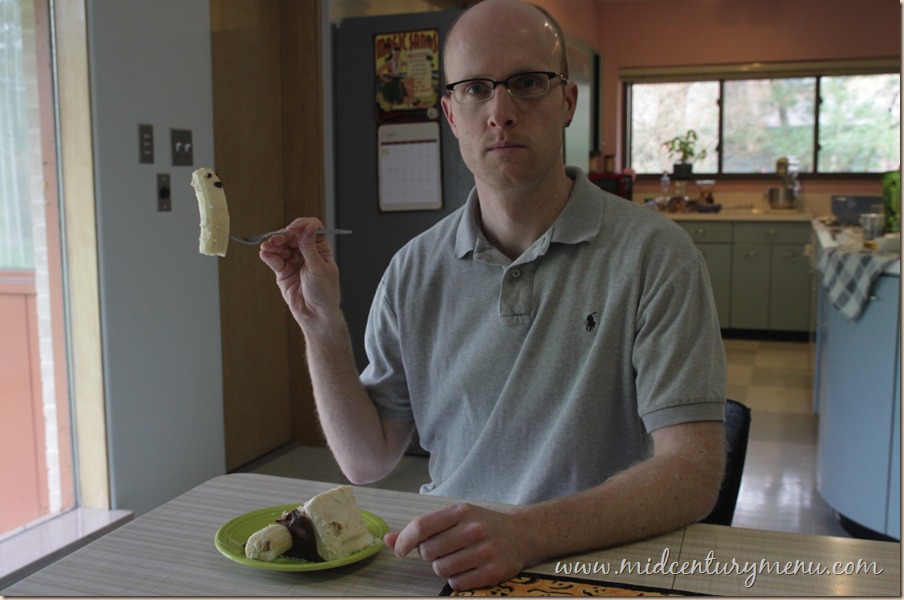 And he scoffed at the treacherous banana frosting. 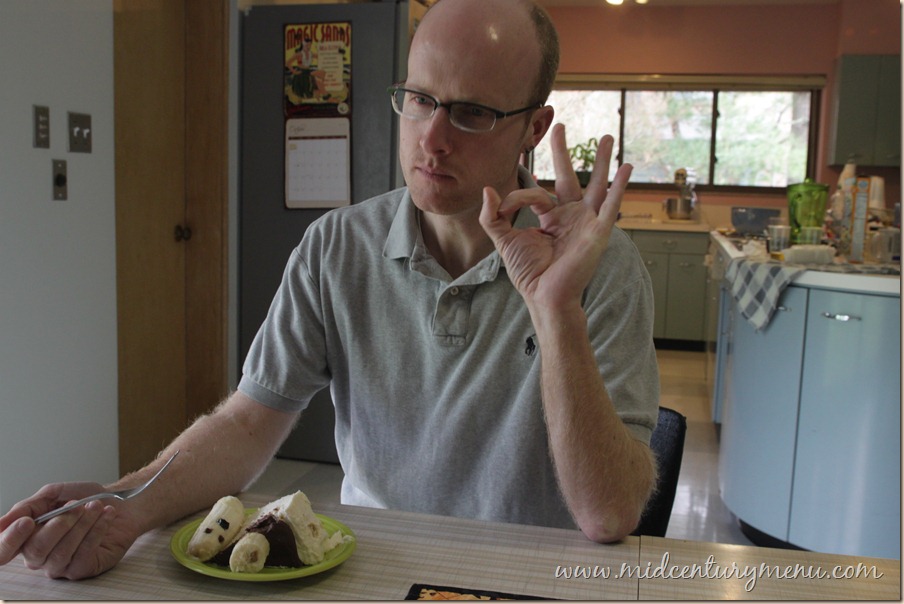 He fought the evil Banana Spook Cake, and won. He even liked the frosting. He had saved the girl and her mother, and in so doing had saved the world.

The Verdict: Hilarious and Good

Love the banana cream frosting. Would be better as a cream pie with a graham cracker crust. Not a fan of the cake mix cake.

From The Girl’s And Her Mother’s Tasting Notes:

Very old-fashioned tasting, like something you would have at your elderly aunt’s house, but very good.