The Food of Astronaut Wives Club Episode 7: "Rendezvous" – Behind the Scenes With Food Stylist Emily Marshall 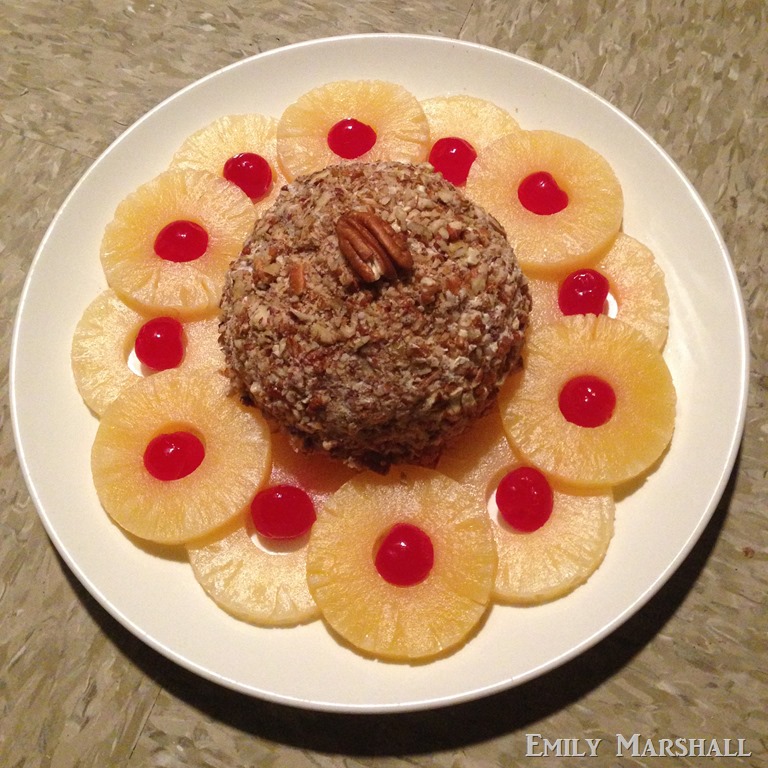 Welcome back to another week of food from behind the scenes of Astronauts Wives Club!!! Episode 7 has some party snacks and treats, along with some pasta and quiche!

I am happy to bring you some close-ups of this food courtesy of food stylist Emily Marshall, who worked like crazy to make sure that the food from Astronauts Wives Club was the most mid-century it could be! 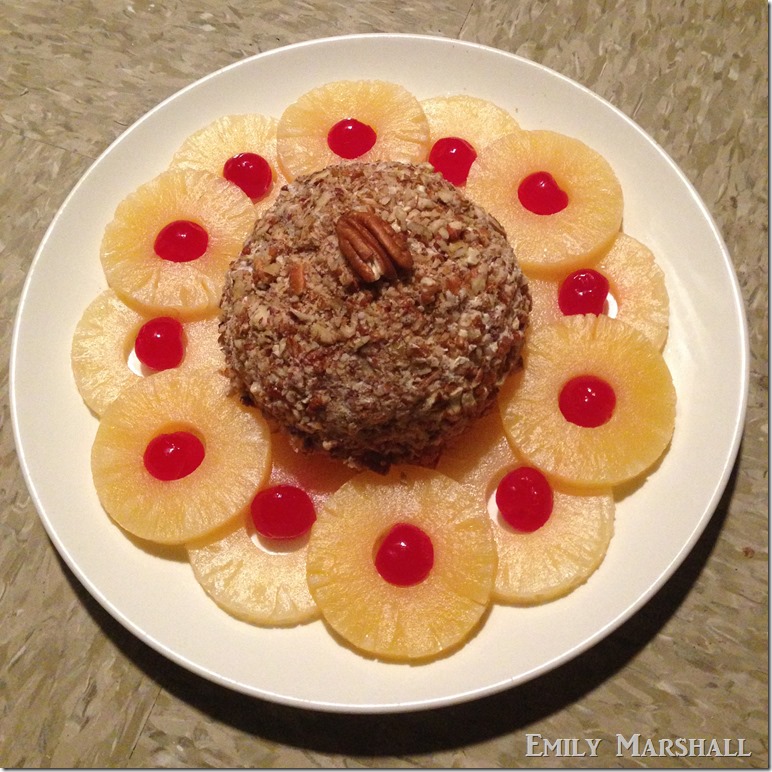 I love, love, love the plating of this cheese ball!

If you would like an excellent cheese ball recipe from my family, check out the post from Episode 1. 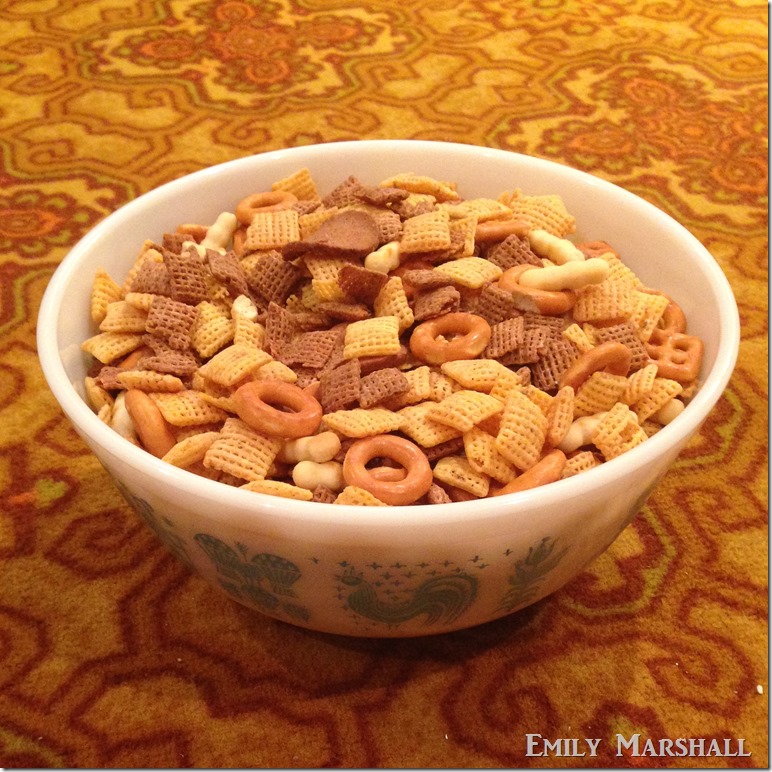 Everyone knows the recipe for Chex party mix, but here are some other fun options from a vintage Ralston Pamphlet. 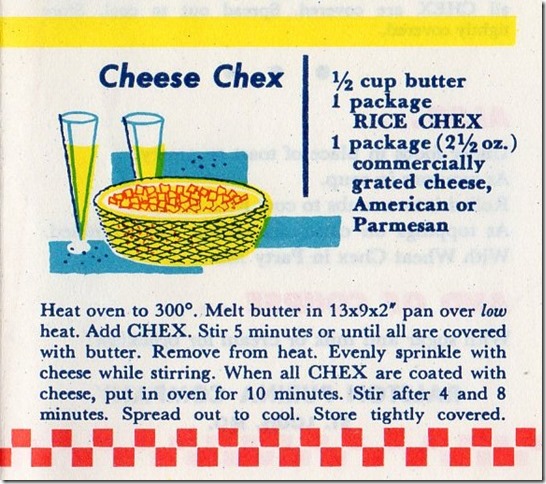 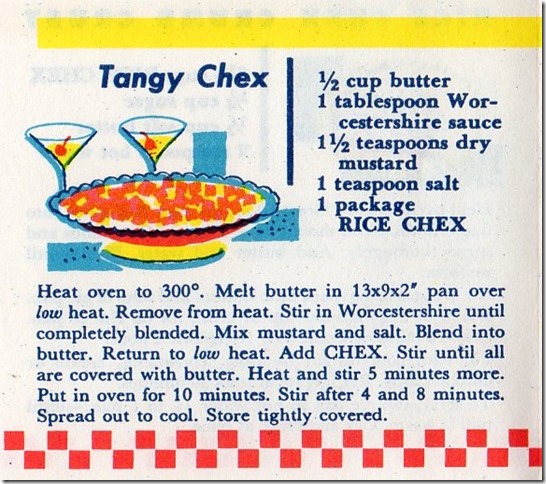 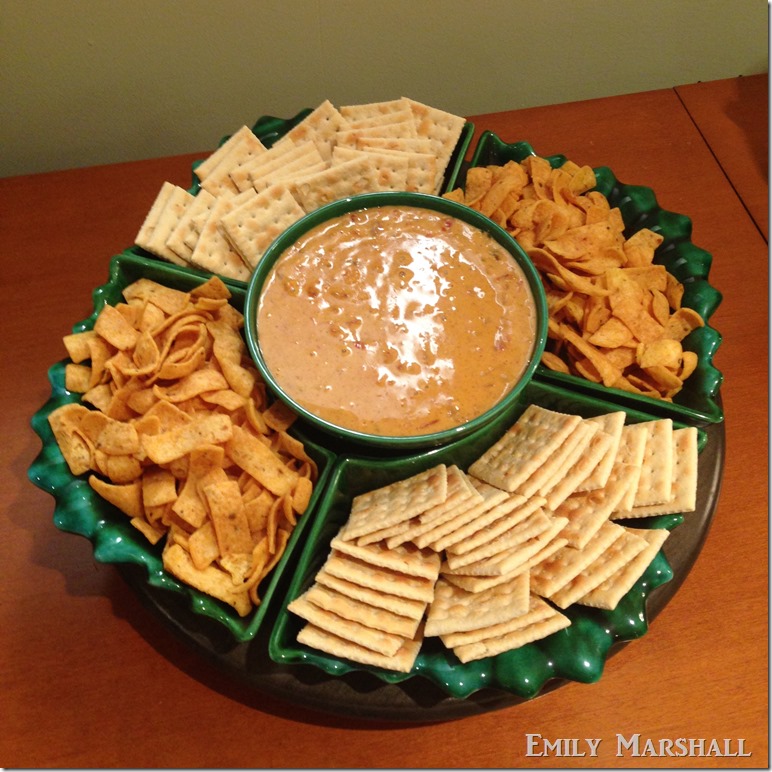 Once again, another very familiar recipe that you can make by melting together cheese (Velveeta) and mixing it with salsa or chili. But I have always been interested in trying this version, which comes from a cookbook called Recipes And Menus For All Occasions, published in 1947, that has just about every imaginable (and some things I would have never thought of in a million years) way you can serve Fritos. 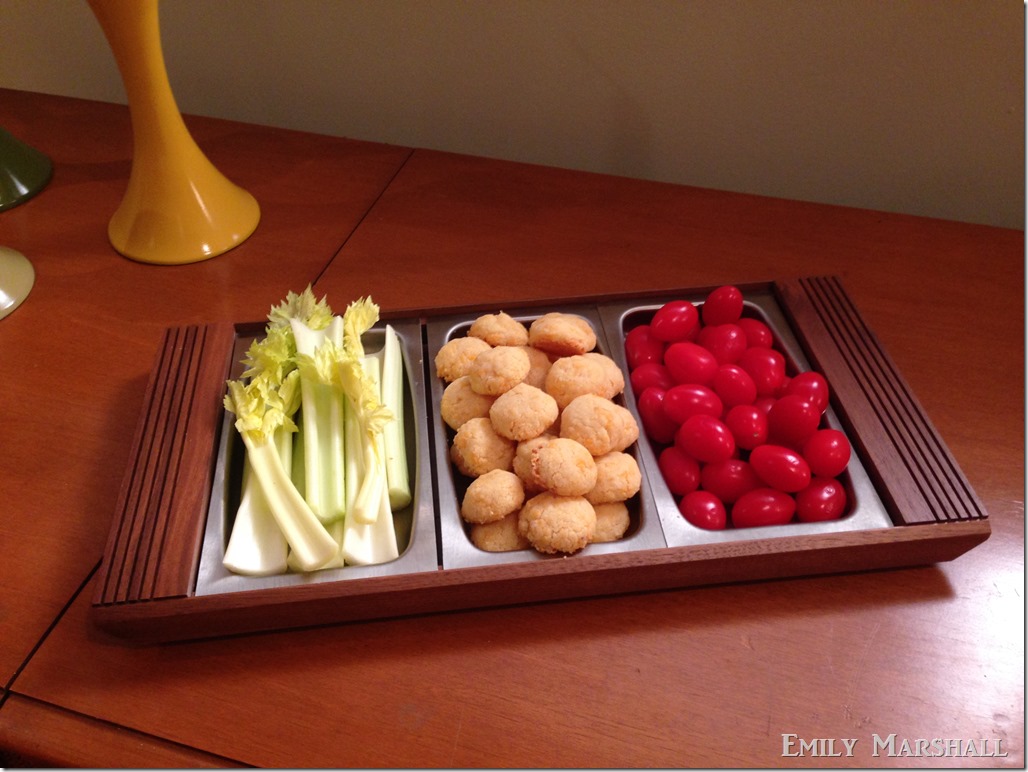 This look really yummy! This recipe is from a vintage cookbook called 50 Wonderful Ways To Use Cheese. 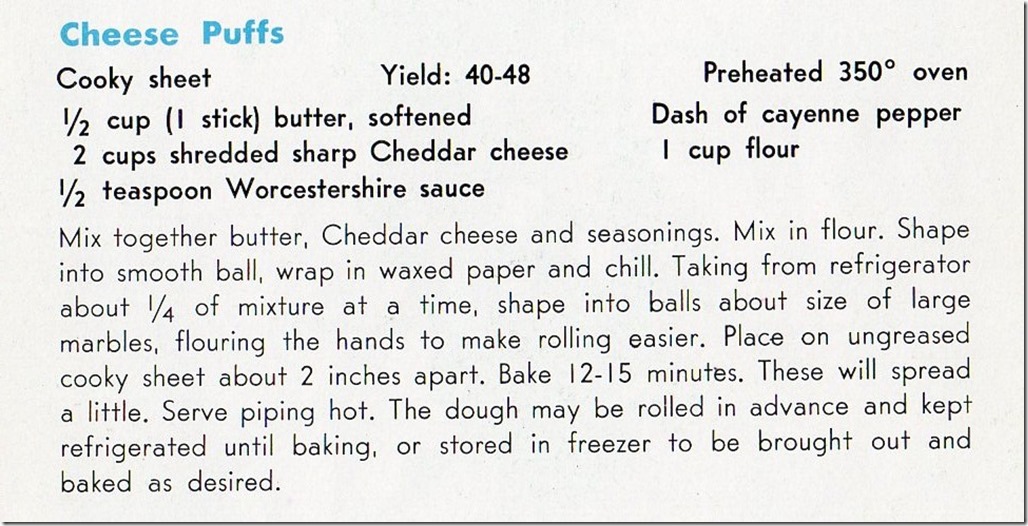 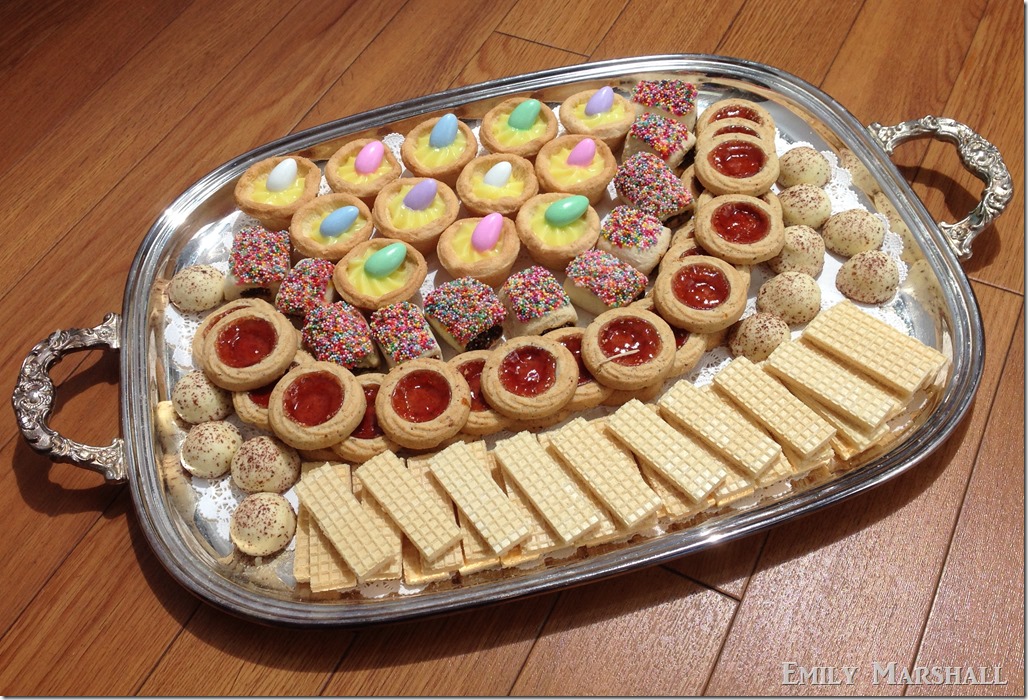 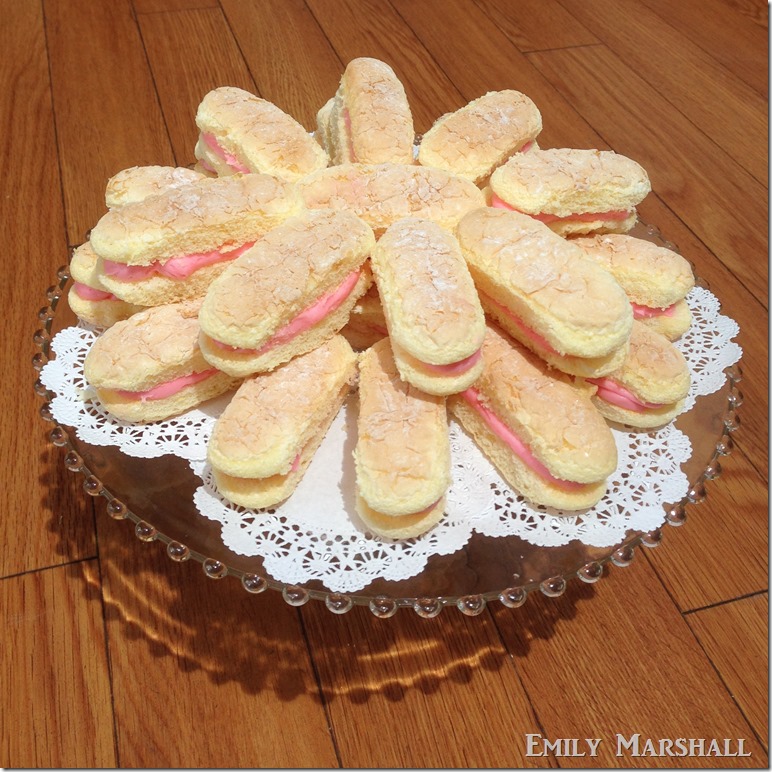 Emily confessed that these cookies were purchased, but were gussied up by her with the pink frosting. Which is actually a totally legit 1960’s thing to do. Everyone was in to “glamorizing”, which was taking something pre-made or pre-packaged and then adding your own extra touch to it to make it seem more homemade. I can vividly remember my grandmother doing this. She would put out a cookie plate very similar to Emily’s, with one cookie or quick bread she made herself and then surround it with cookies bought at the local bakery.

Emily said she didn’t get pictures of the dinner at Louise’s, which was a simple spaghetti bake with salad and rolls. But she made it vegetarian for the actors by using fake beef.

Here is the traditional recipe for Johnny Marzetti, but I  also found a similar meal in my American Beauty Macaroni Products Book from 1960 called, Prize-Winning Recipes. 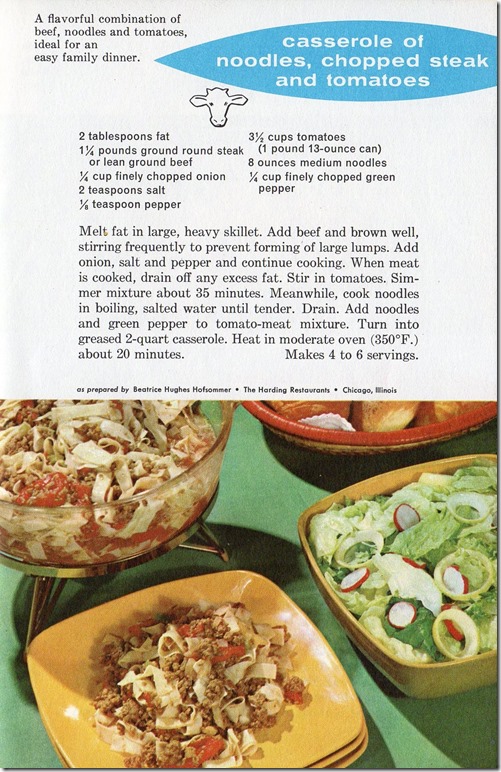 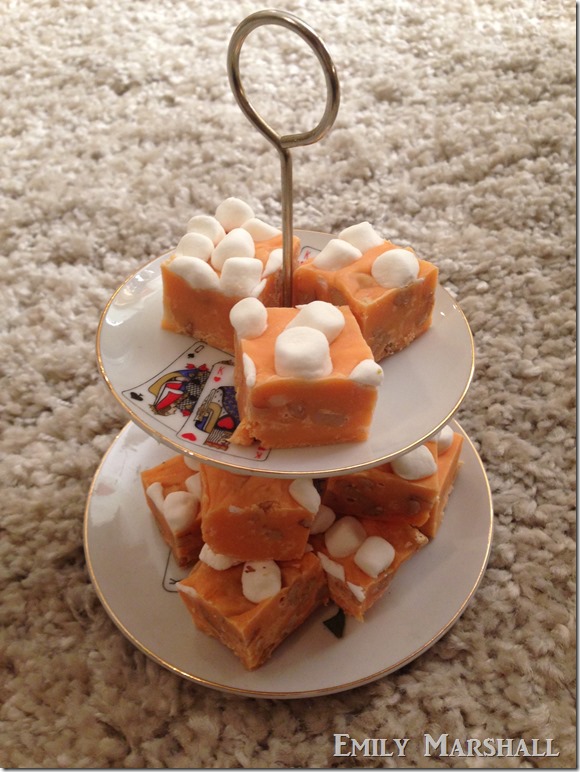 Emily says this pretty fudge is the standard Carnation Fudge recipe, but with orange flavoring, some orange food coloring and marshmallows added. 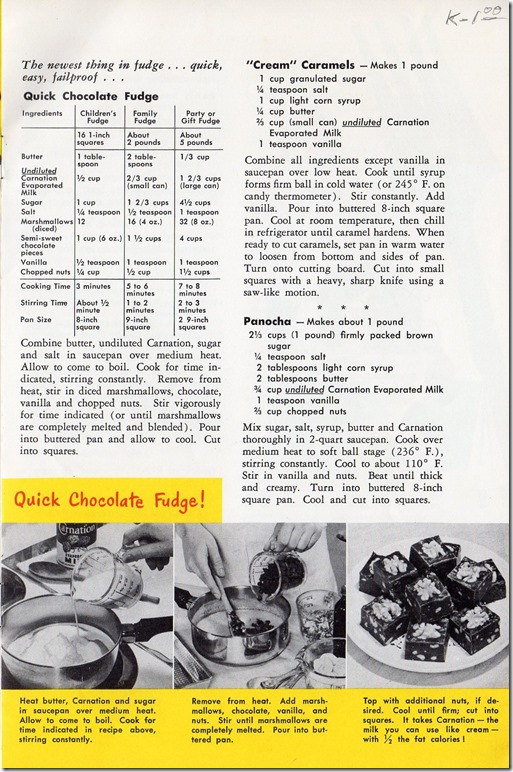 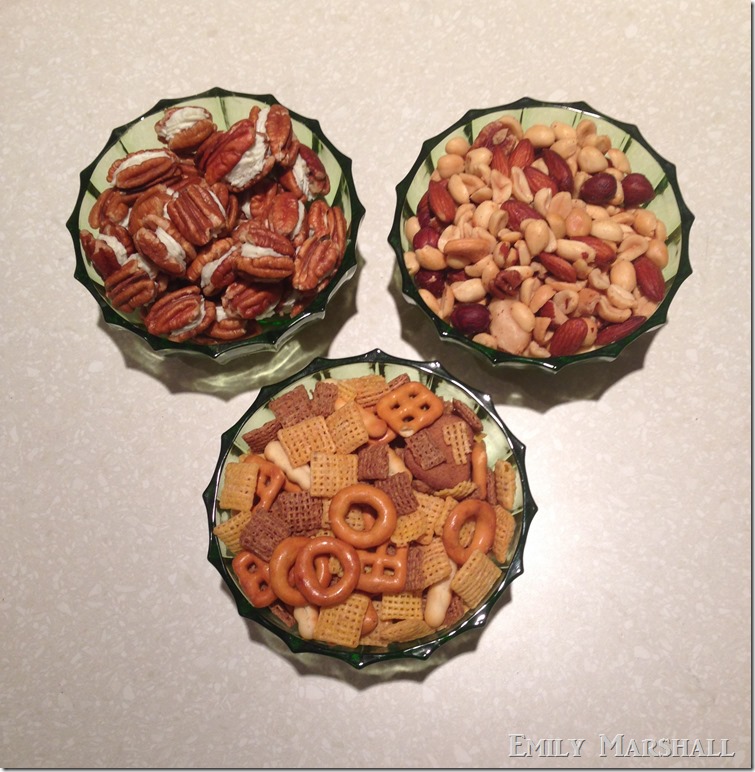 This trio is Chex Mix, Planter’s Party Mix and then pecans sandwiched together with Roquefort Spread. This recipe is from Entertaining At Buffets Teas Parties from December of 1958. 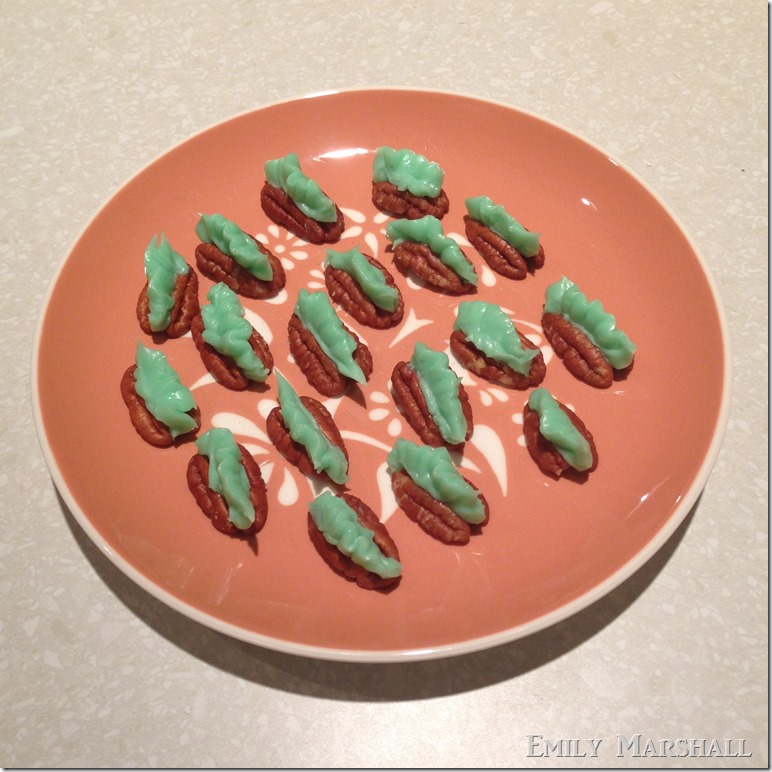 These were a last-minute throw together from ingredients Emily had on hand – they are just pecan halves with frosting piped on top. But Emily says they were delicious and were devoured by the crew and the actors! 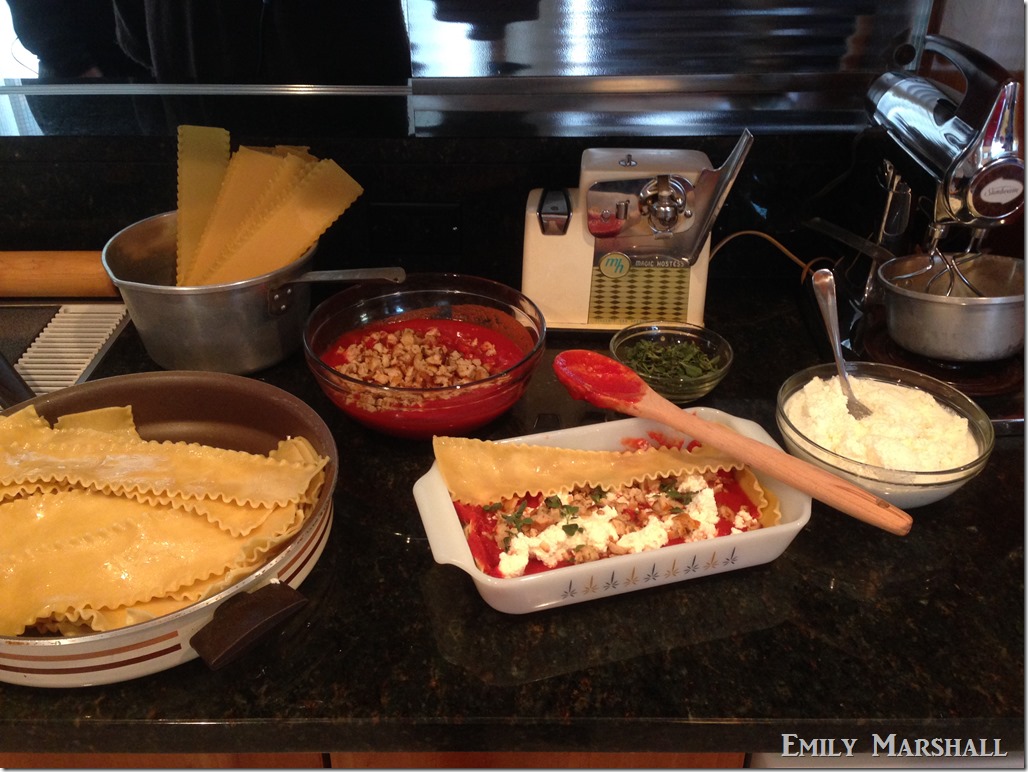 This lasagna recipe is from Prince Treasury of Italian Recipes, and looks a lot like Emily’s set! 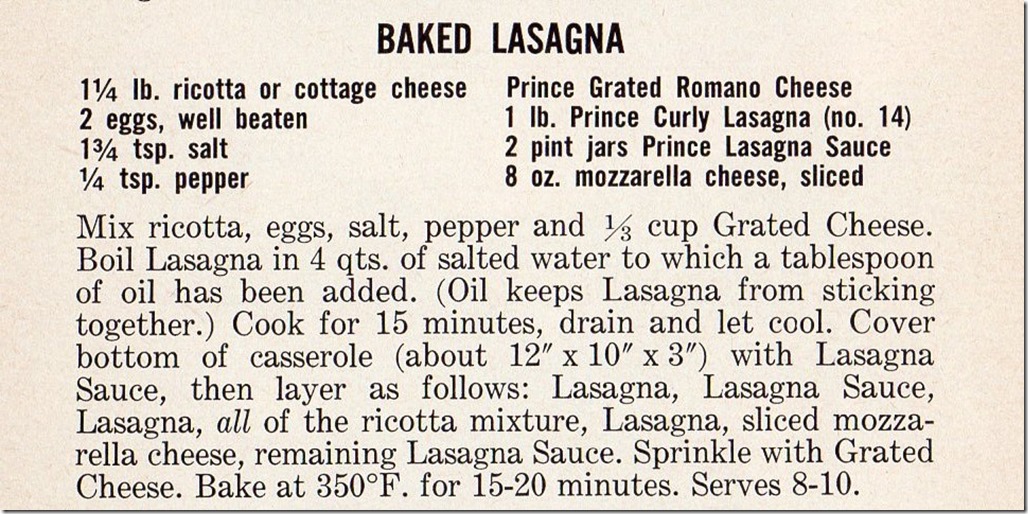 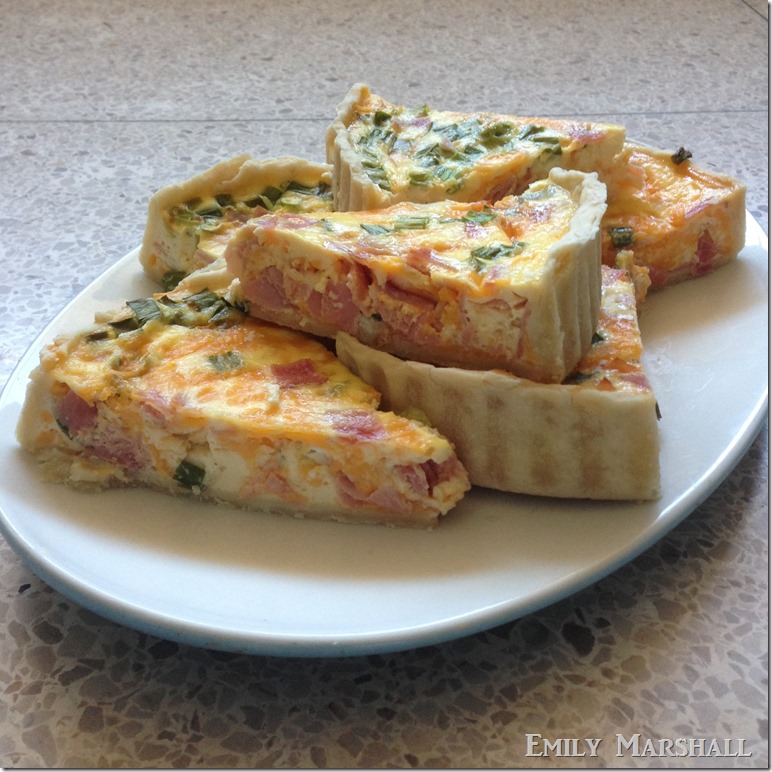 According to Emily, this scene didn’t go at all like it was scripted. It was supposed to have lines that sarcastically referred to quiche as egg pie and Jo pointing out that she was trying something new and French in honor of the subject of visiting France. Instead, you never see the quiche. There was also an amazing looking pound cake and trifle they didn’t end up using. Ah well!

Here is a recipe for Quiche Lorraine from The Palace Hotel in San Francisco. This recipe comes from the amazing Ford Treasury of Favorite Recipe from Famous Eating Places, 1950. 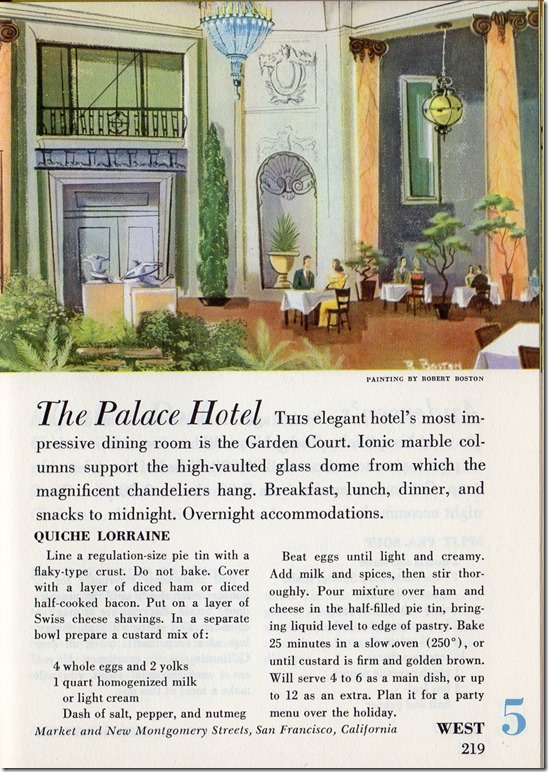 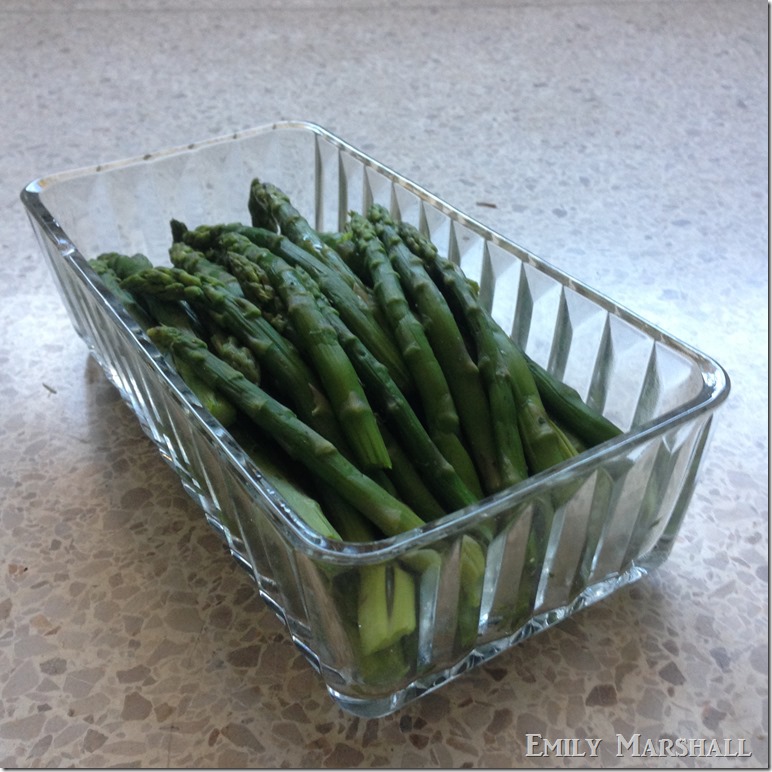 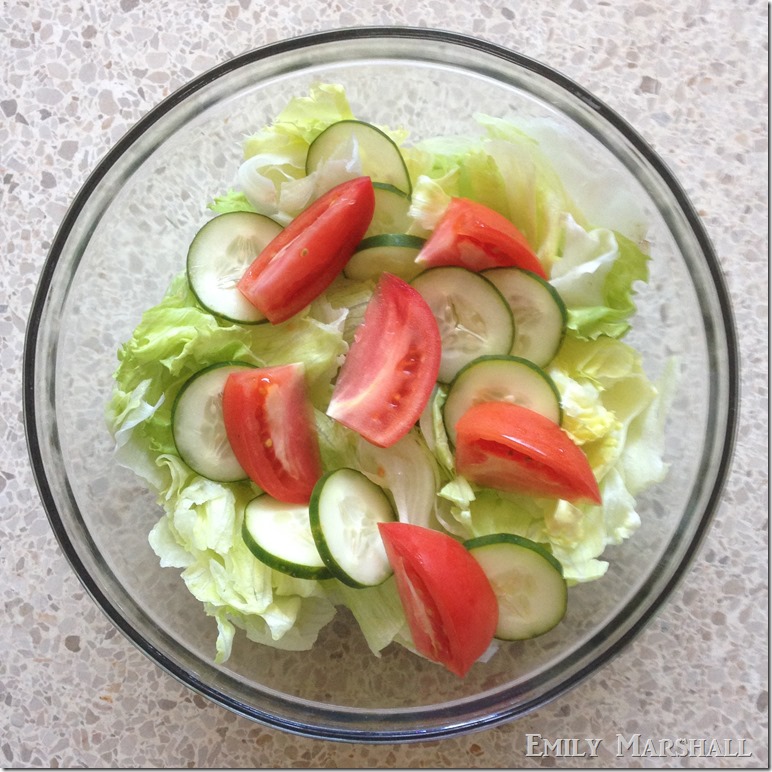 A big thanks to Emily Marshall, who was so generous in sharing all her awesomely styled food pictures! And if you like this and want to see more, make sure to tune in Thursdays at 8 pm on ABC to watch more of Emily’s food in Astronaut Wives Club, and come back next week when we showcase food from Episode 8!