The Food of Episode 1: “Launch”– Behind the Scenes of Astronaut Wives Club with Food Stylist Emily Marshall 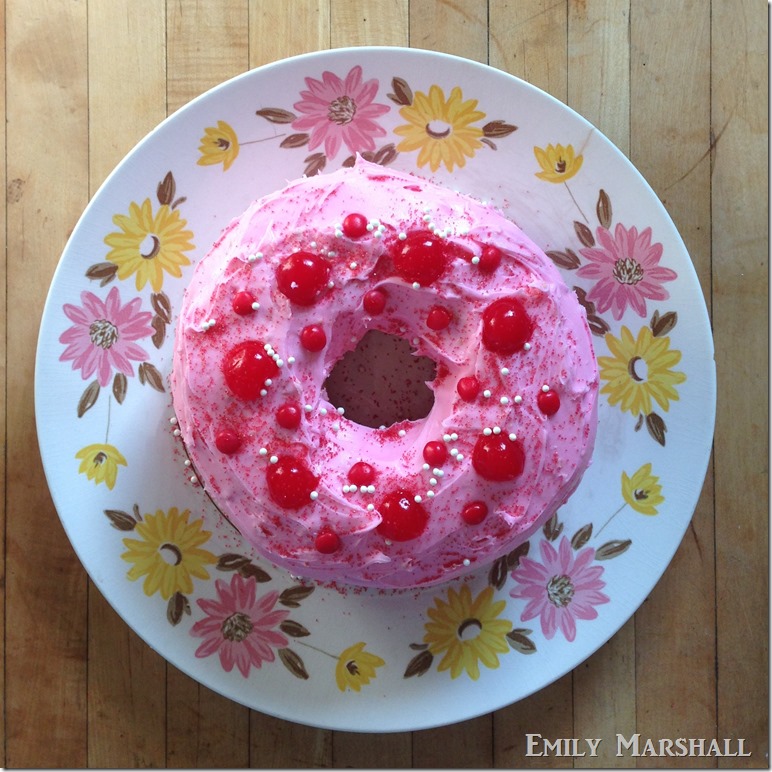 Who is ready for some great mid-century food and recipes? Hopefully everyone has had a chance to watch the first episode of Astronaut Wives Club by now (we don’t want to give away any food spoilers!), but if you haven’t I think it is still streaming on ABC’s website. If you love vintage clothes, food and décor this is definitely a show that you are going to want to watch. The detail in those areas was fantastic. Halfway through the episode, Louise Shepard was in the kitchen mixing lime gelatin with mayo, and I knew that I was going to enjoy this show.

Speaking of which, I am happy to bring you some close-ups of the very detailed food courtesy of food stylist Emily Marshall. So sit tight and get ready as we blast off into a galaxy of 1960’s food from Astronauts Wives Club!

A pretty angel food cake with frosting, and a lovely decorating and plating job by Emily! These are just standard recipes (you could use boxed mix and canned frosting, for true mid-century authenticity!), but here is some color inspiration from a vintage Betty Crocker ad! 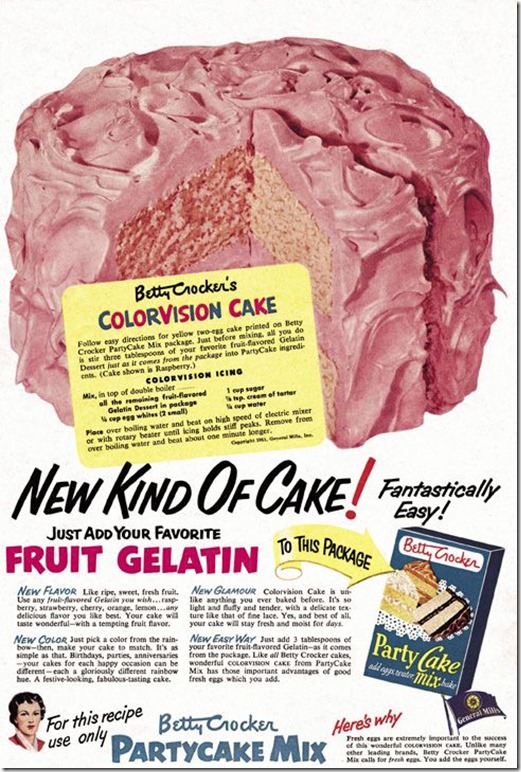 And while this is a gorgeous cake, did anyone see the cake Rene Carpenter brought to the wives’ picnic? The one that matched her outfit? It was really something!

UPDATE: After reading my post, Emily decided to send over some pictures of that cake and Rene’s outfit! 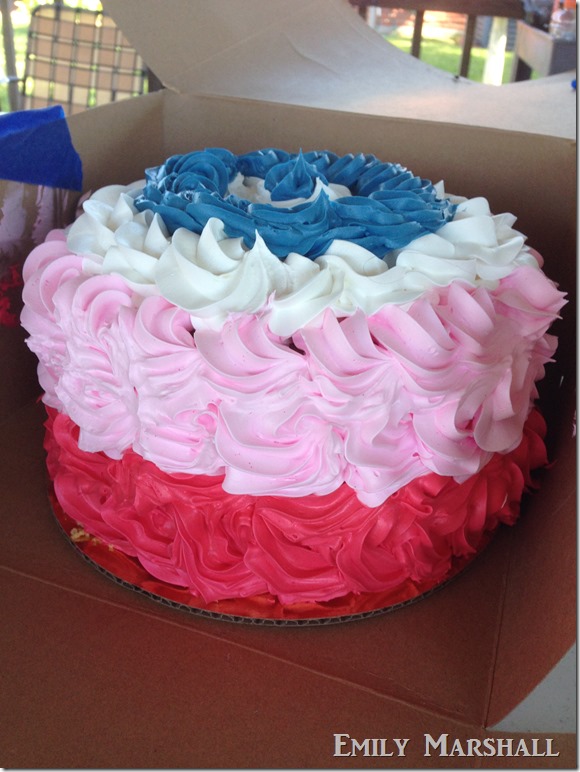 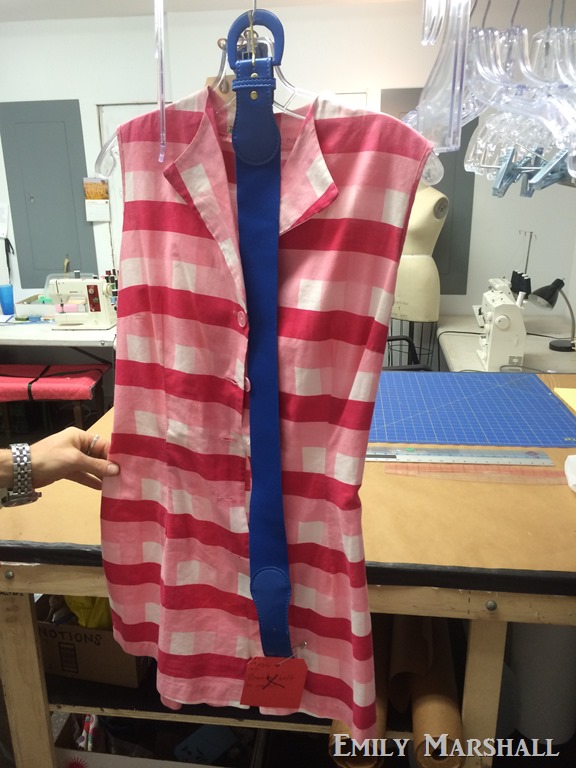 The best!! Thank you, Emily! 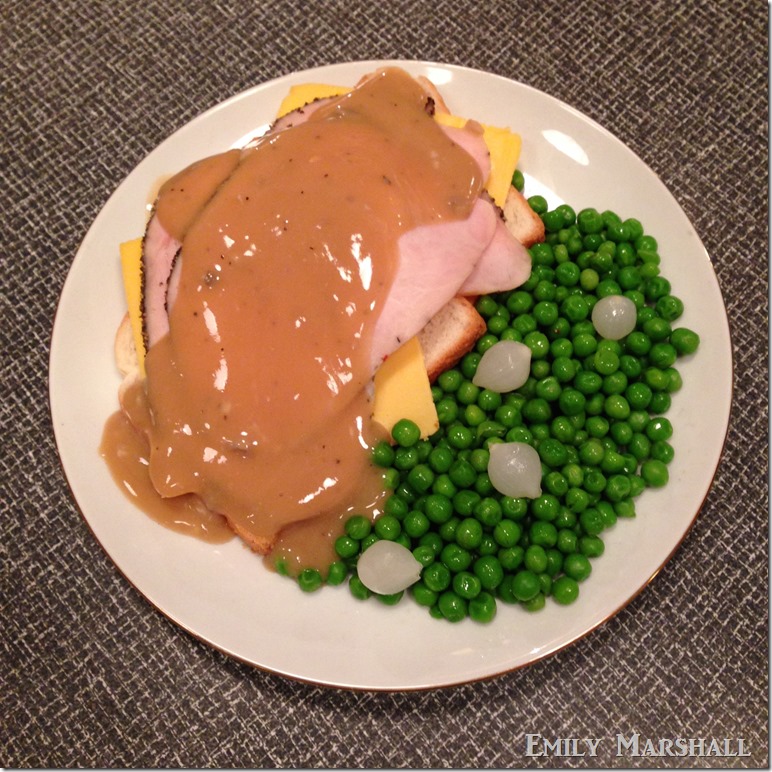 Yum! An open-faced turkey sandwich with cheese, and peas with pearl onions! 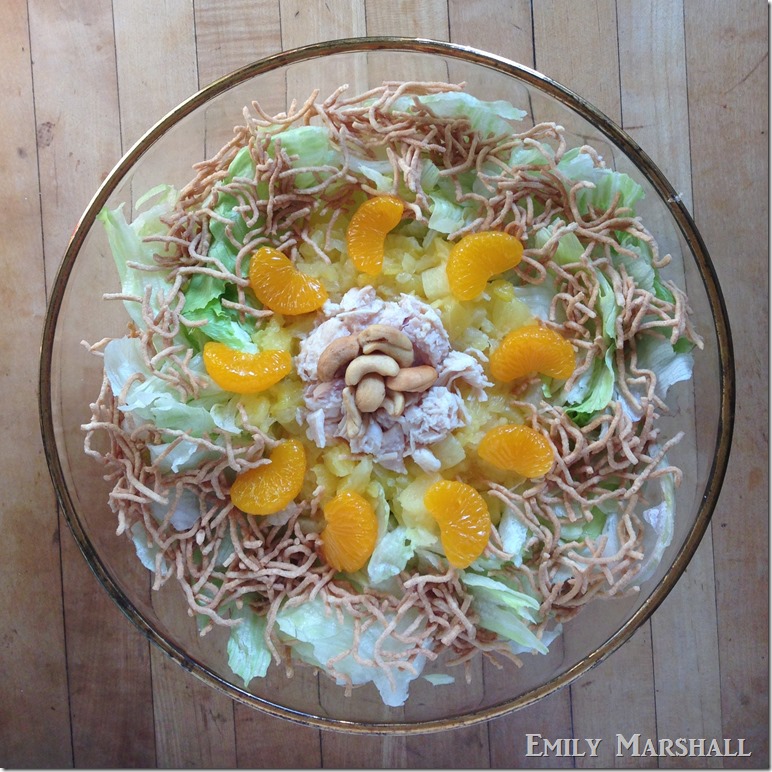 The mandarin oranges are a nice touch! I have to admit, this actually looks really good to me.

If you are interested in trying this salad, here is a recipe from Good Housekeeping’s Book of Salads from 1958. 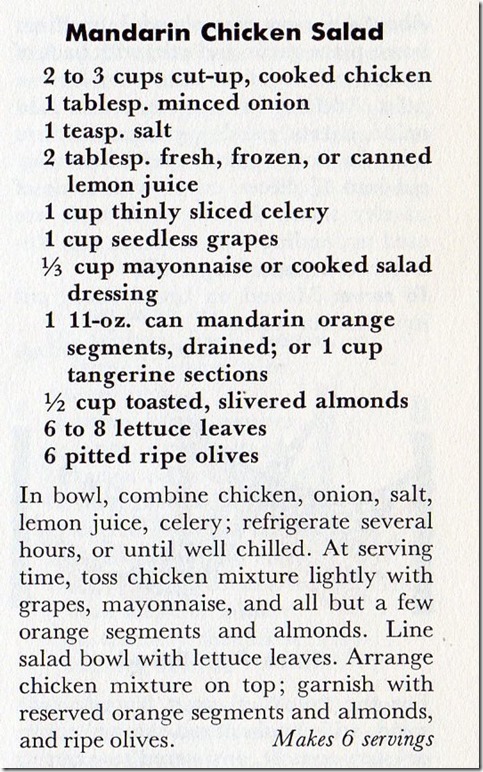 And here are some of the first Launch party goodies! When Emily and I were chatting about starting up this series, she told me that food plays a huge roll in the series, and she was right! Armed with casseroles, the other wives show up spontaneously at Louise Shepard’s door for an impromptu pot luck while they watch the launch. Though they are rebuffed, they still have their potluck party at another house, and later in the show they end up having a get together with Louise anyway! 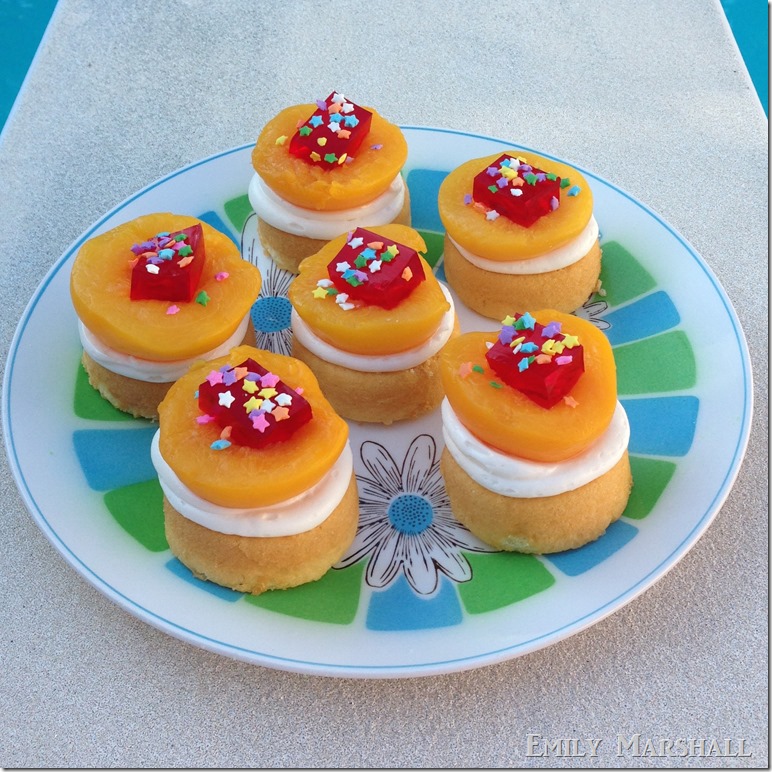 Aren’t these cute??  And easy too! These are little sponge cakes covered with whip cream and peaches with  a gelatin cube inside them. Here is where Emily got the recipe: 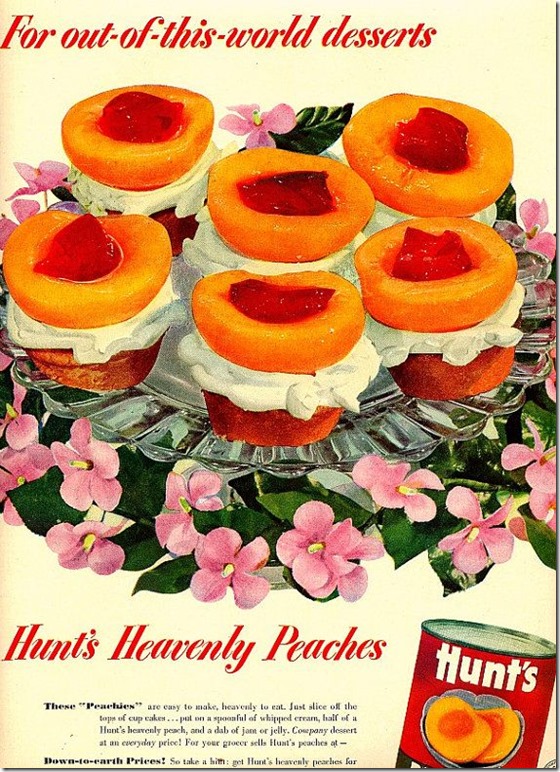 FYI – Check out Emily’s Pinterest board if you want to see more inspiration for the food on the show! 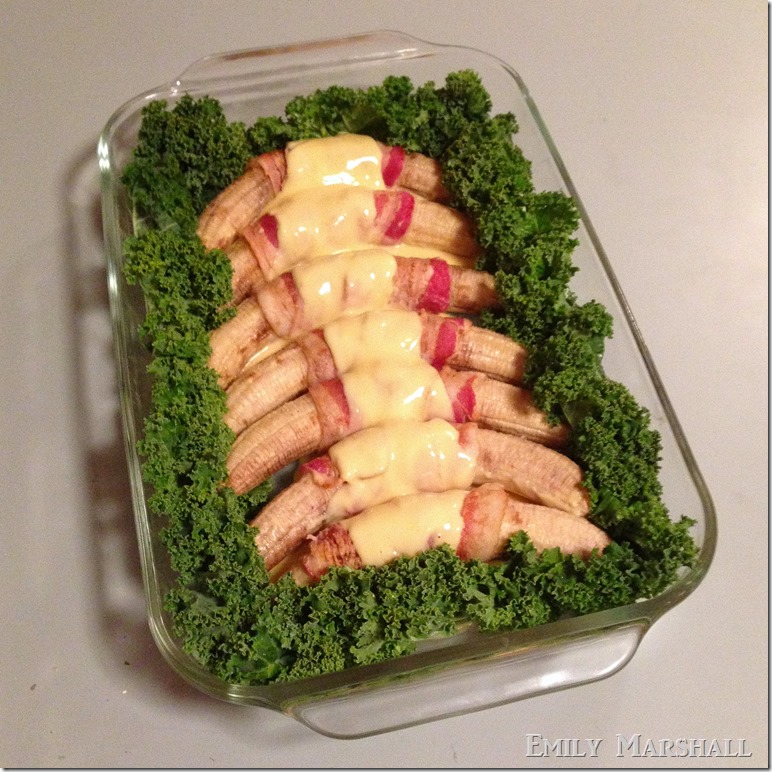 Oh my goodness, when Jo Shirra held up her “famous Banana Bacon Hollandaise,” I burst out laughing! How many times have you seen pictures of this casserole limping around the internet? Emily made a good choice with this one.  And instead of ham and cheese sauce, her version uses bacon and Hollandaise. Is it better? I am not sure. Maybe someone needs to test that out. *Clears throat loudly*

In the meantime, here is the ham and cheese sauce version.

We have had the special joy of making this dish here on the blog, and it was disgusting. If you want to read all about it, you can check out the (ancient) post here! 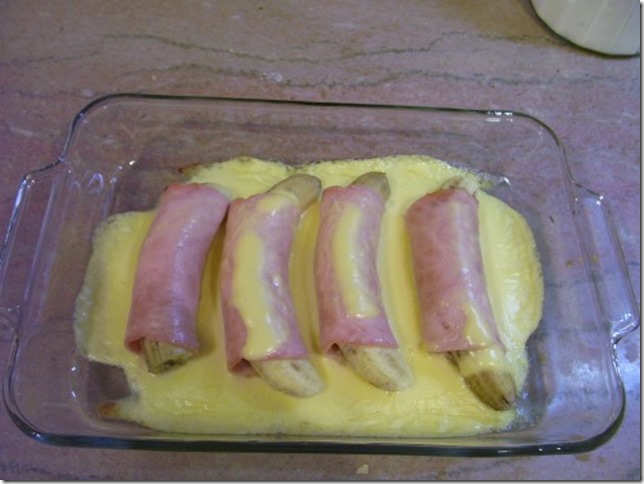 Everyone loves Beefaroni! Emily’s garnishes on this one are the best. Here is the inspirational Beefaroni ad! 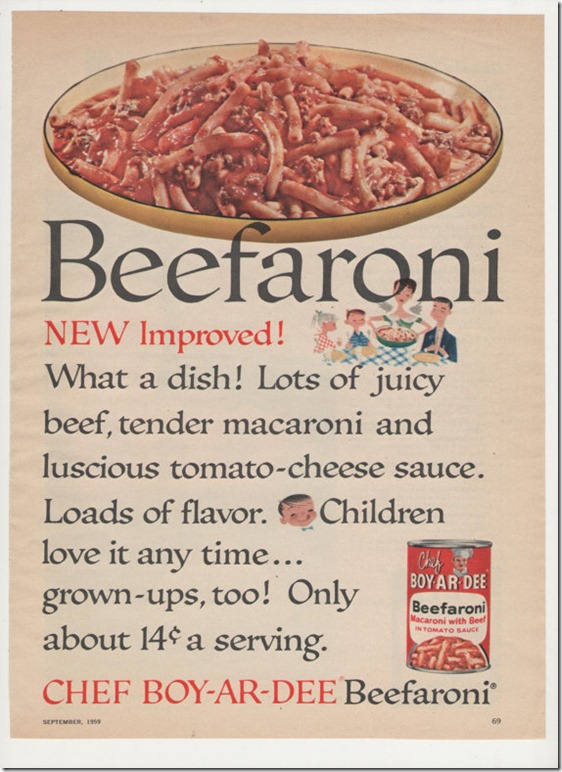 According to Emily, this is just a can of Beefaroni opened and dumped into a casserole dish. Superb! 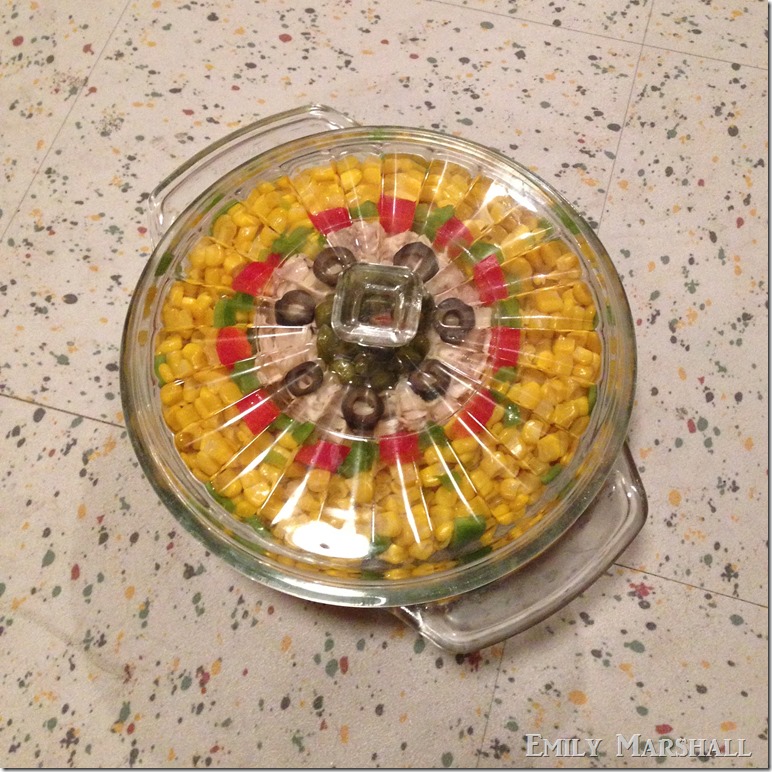 Another fun dish from Mid-Century Menu archives! Here is the inspirational ad: 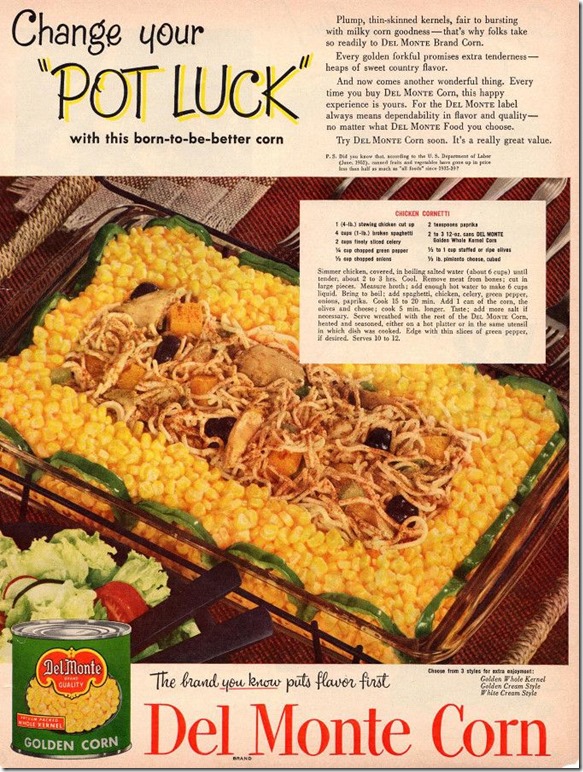 And here is the tested dish, in a guest post from Erica of Retro Recipes! It was described as “Tasty!” by her family! 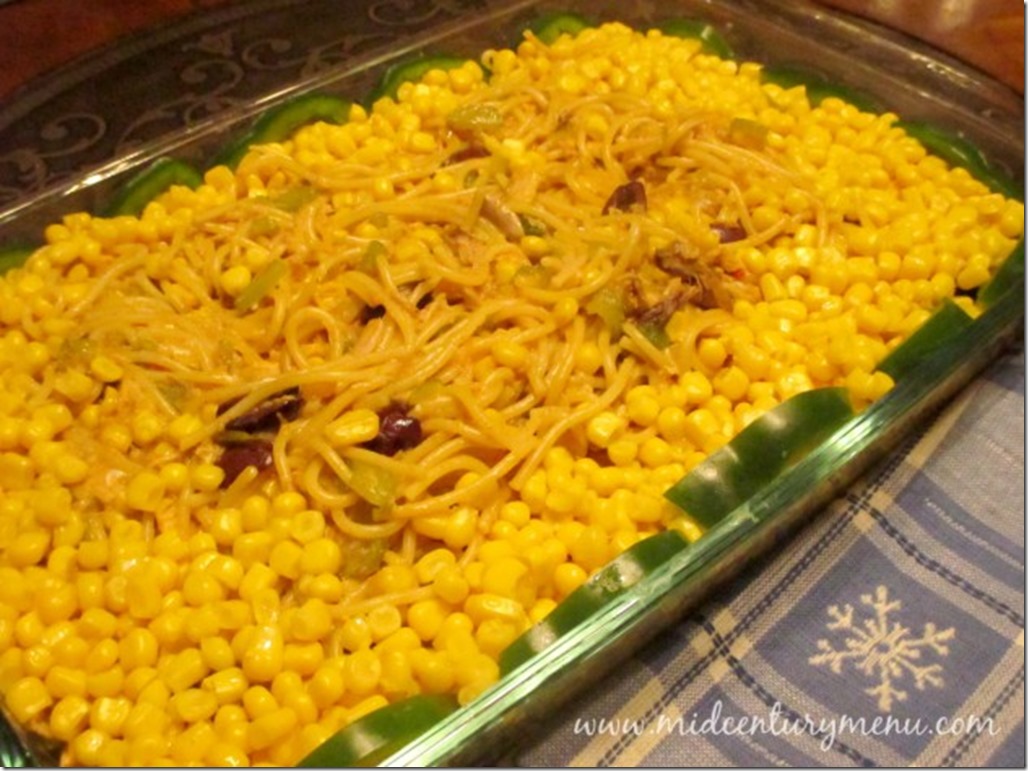 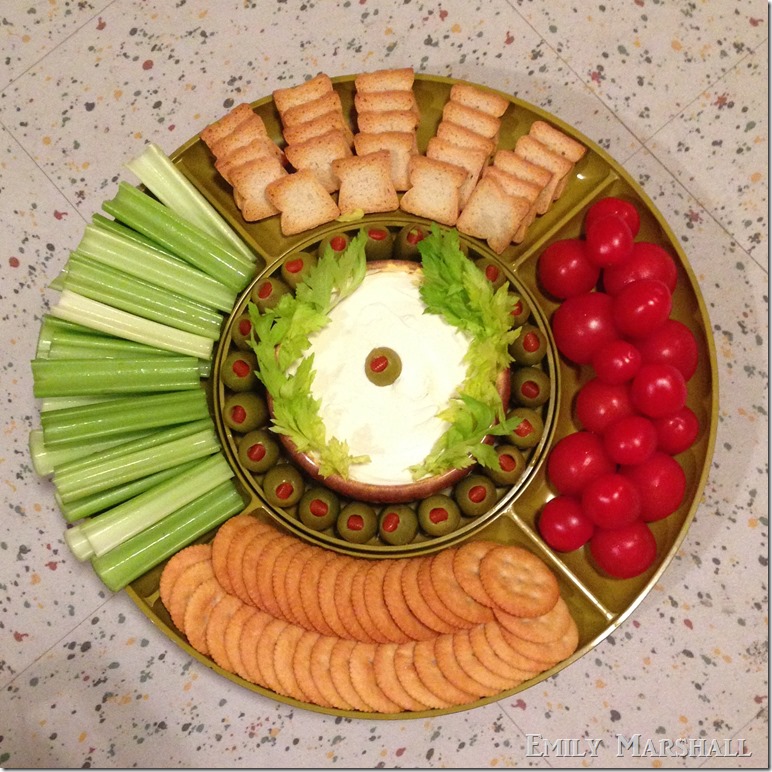 A classic, and Emily’s plating is perfect! 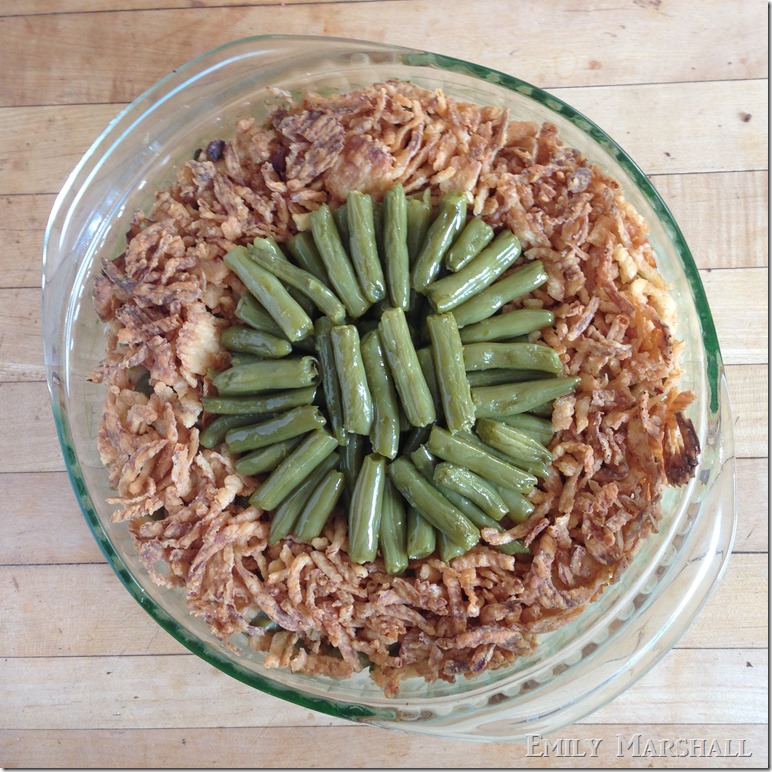 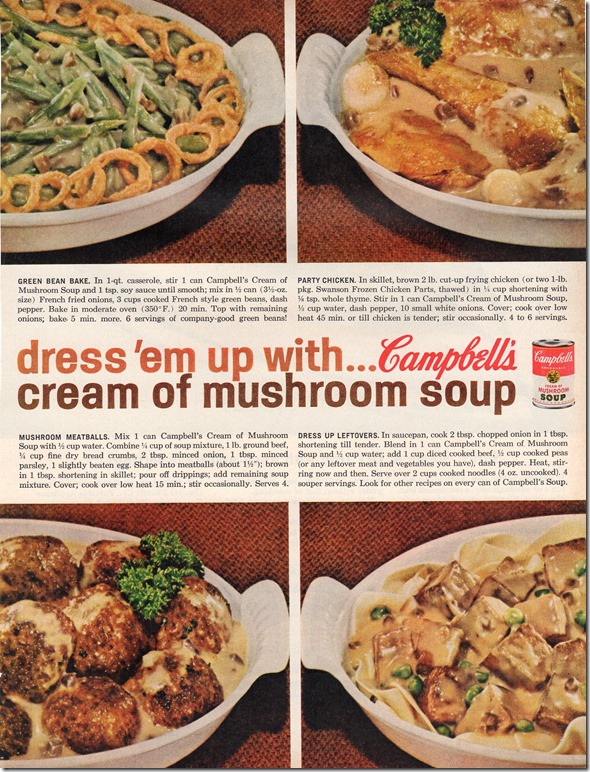 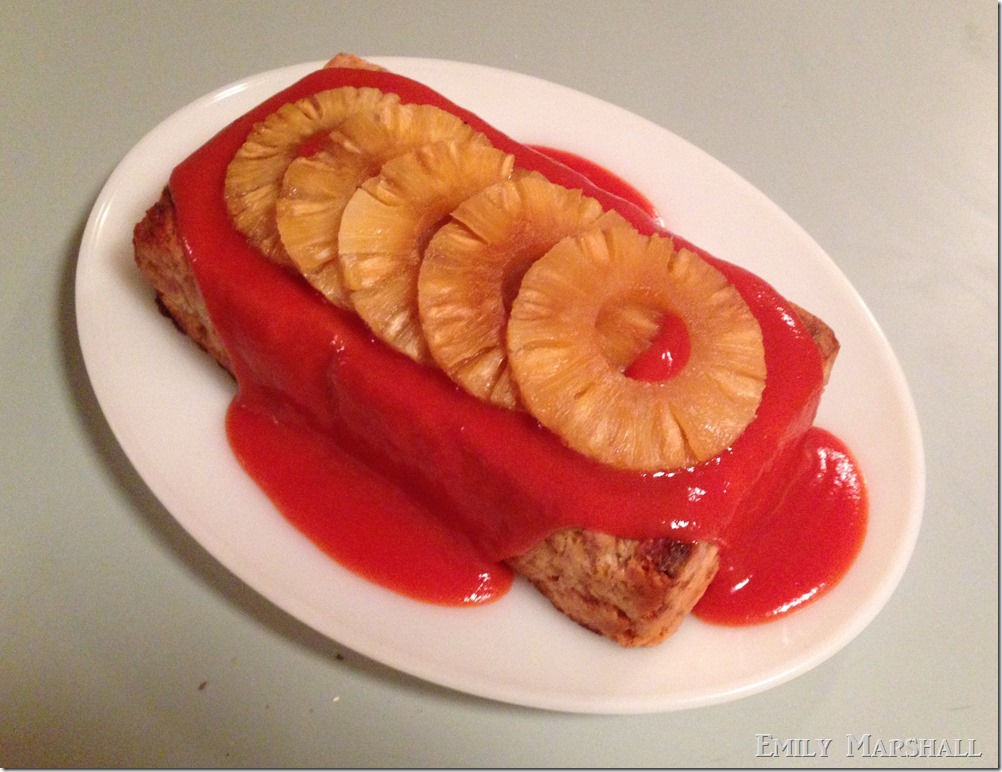 How fun is this? I love the Technicolor ketchup.

If you are aching to make your very own ham loaf, here is a recipe for Ham Loaf from Good Housekeeping’s Who’s Who Cook from 1958. 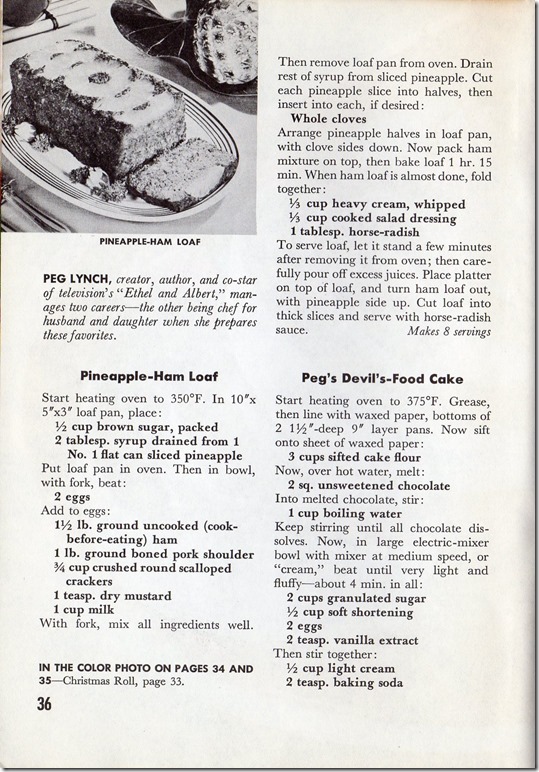 We’ve tested out a version of ham loaf with mince meat on our blog in the past as well. It received the designation of “edible”.  You can check out the post here! 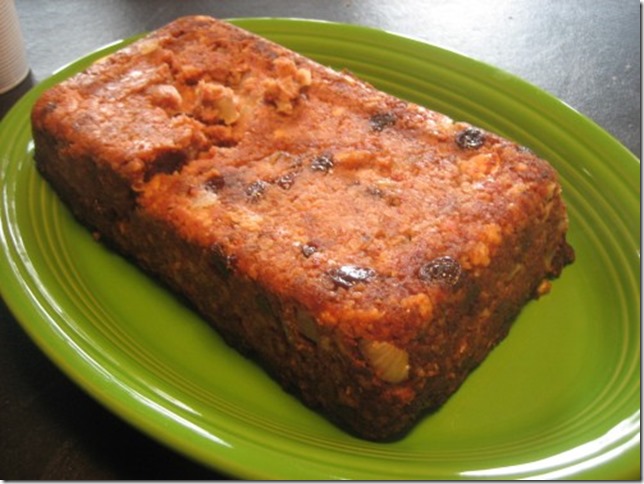 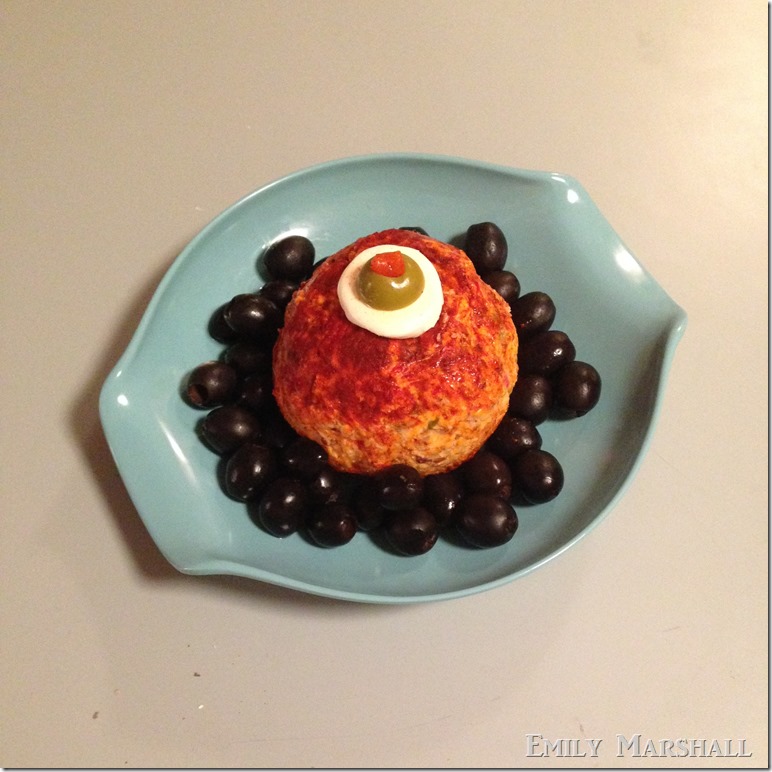 Nothing more classic than a cheese ball! Or delicious, as long as it is done right!

Here is the recipe for my family’s cheese ball, which it turns out is also Kraft’s cheese ball. Who would have thought? 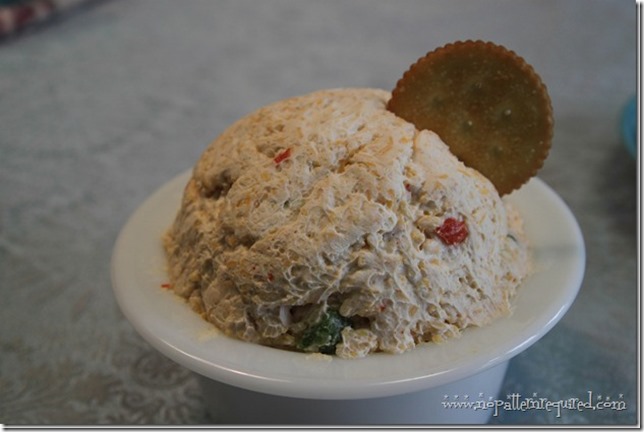 This is a fantastic cheeseball, and we serve it at pretty much every family function. If you want a real treat, try it hot! 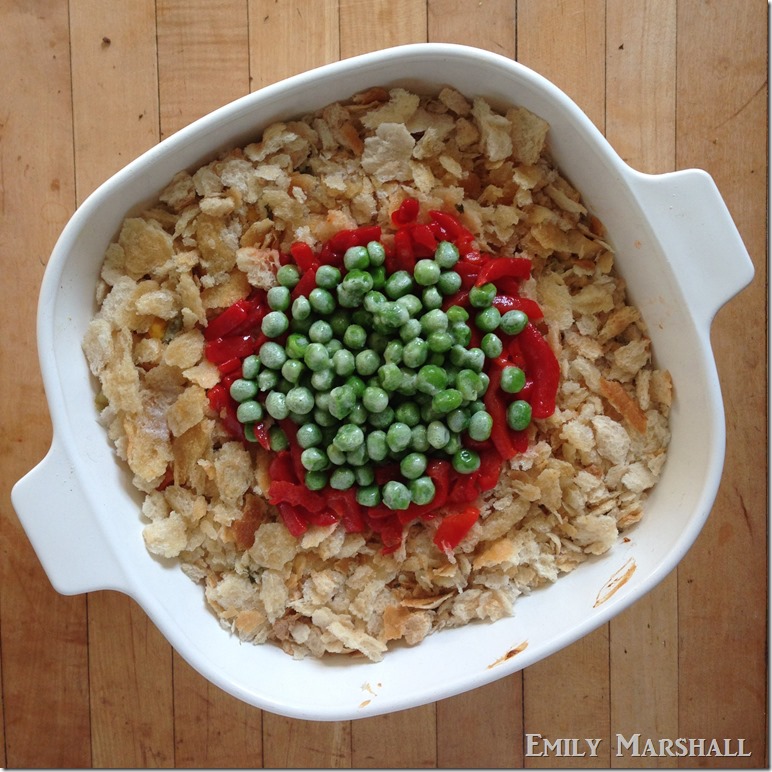 Most everyone knows the classic recipe for tuna noodle casserole, so here is a bit different version that uses cheddar cheese soup and rice. 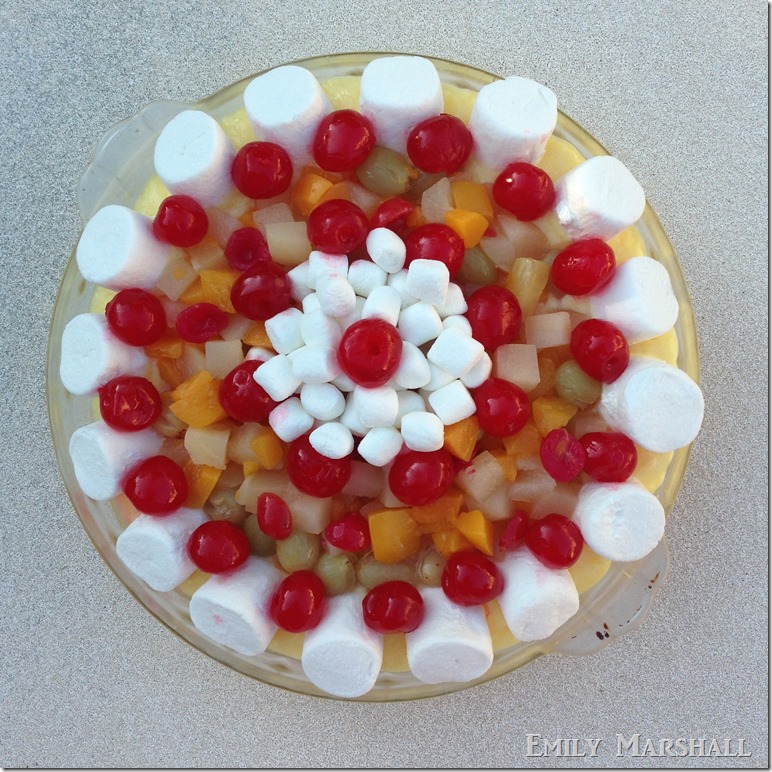 This dish and the Peachies are tied for my favorite for this episode! How cool is this? And fruit cocktail and pudding with marshmallows? Nothing wrong with that!!! 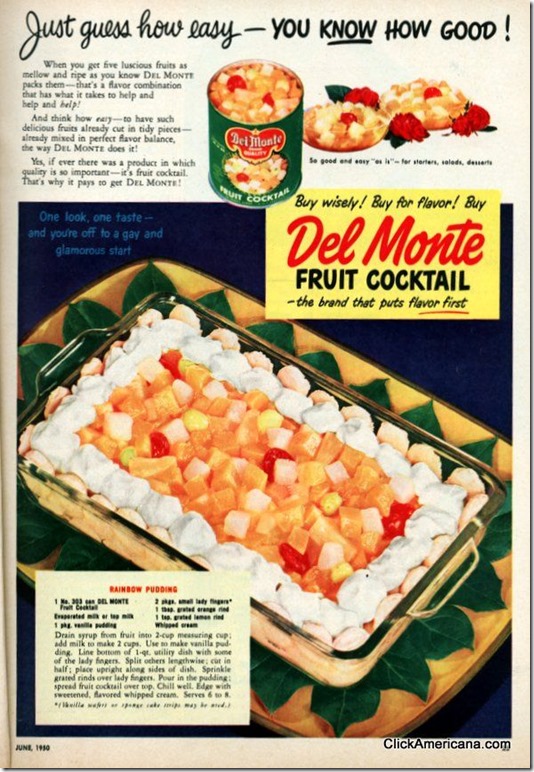 A big thanks to Emily Marshall, who was so generous in sharing all her awesomely styled food pictures! And if you like this and want to see more, make sure to tune in Thursday at 8 pm on ABC to watch more of Emily’s food in Astronaut Wives Club, and come back next week Wednesday when we showcase food from Episode 2!