This week I dug into the archive specifically looking for a recipe that looked like it was going to be terrible, but ended up tasting good. I found it in Deviled String Beans and Tuna, Tom’s Pick from our “Sing A Tune To Tuna” contest. This post originally ran in August of 2011 and is notable not only on the basis of taste, but also because this is one of the only times that I enjoyed eating canned green beans.

This is the reason that Tom and I make crazy vintage recipes. Because everyone once in a while, a horrible, disgusting-looking recipe will be made and it will turn out well.

Like this one: Deviled String Beans and Tuna, which was submitted by Amy. Congratulations, Amy on sending in Tom’s favorite! 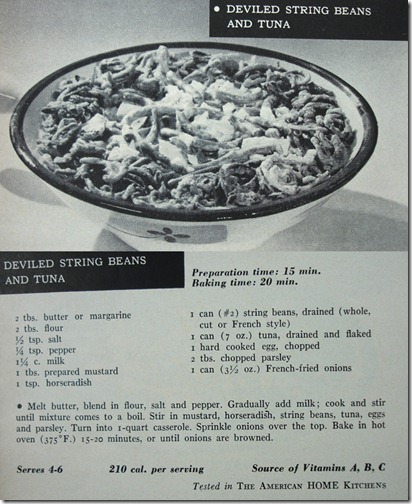 Ahhh…American Home Kitchens. You never let us down!

Hi!
I’ve attached a recipe for Deviled String Beans and Tuna from the September 1958 issue of The American Home.

Okay, okay. I know what you are thinking. “How is that disgusting pile of gray-black entrails even edible, let alone something that Tom enjoyed eating??” Well, thanks to Tom’s iron stomach, and the magic of color-photography, I am able to tame this scary thing and make it – dare I even say it? – delicious.

But good. I can make it good. 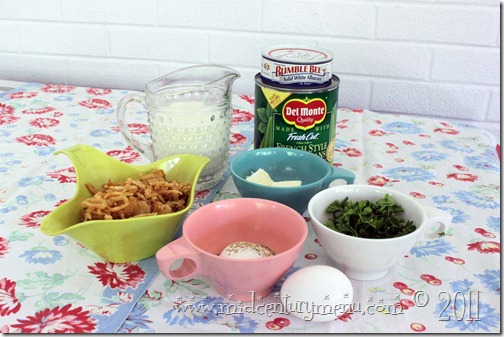 It occurred to me as I set out the ingredients (as I am sure it has already occurred to most of you) that this is basically green bean casserole, minus mushrooms and plus tuna and horseradish. Which wasn’t good news for me, since I detest green been casserole…in fact, I detest canned green beans in any form. But Tom was excited. For some reason, whenever we make something I really hate, he gets all excited. 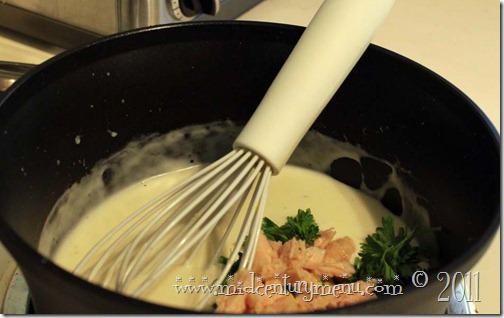 But, I soldiered on, even thought I was convinced I would hate this. That is how dedicated I am. How far above reproach. 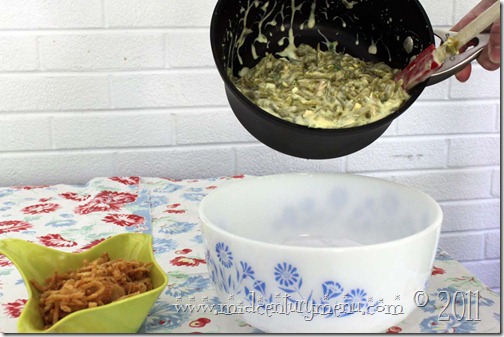 Maybe color photography isn’t the best thing for this dish. 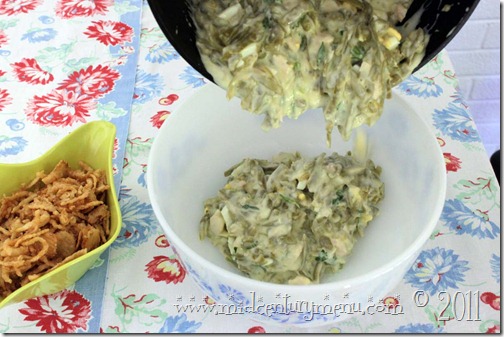 I remembered cackling with glee at this point.

“Look at how disgusting this looks! Everyone is going to hate this!”

Which I guess means that I get excited when something we make is really going to gross you guys out. 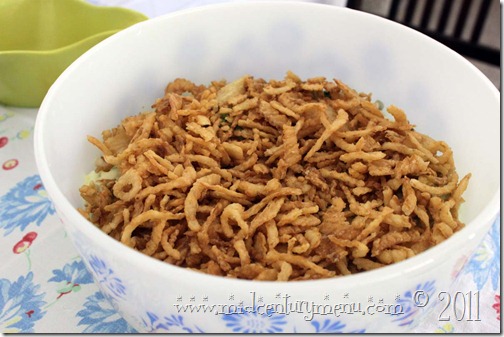 Either way, it was presentable again. 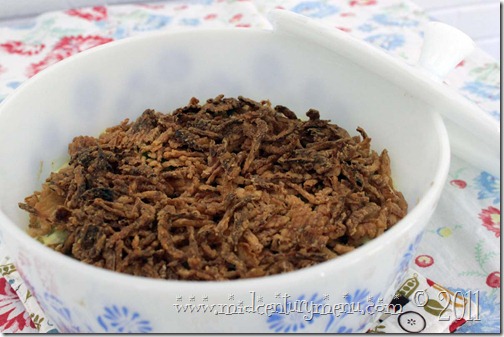 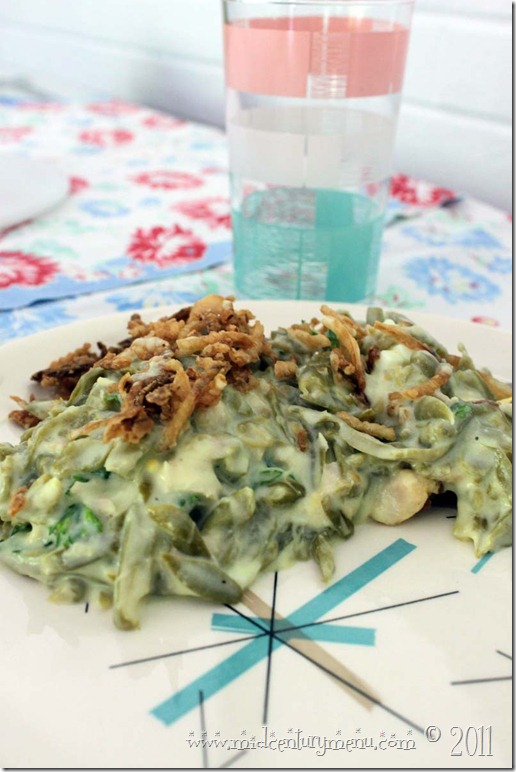 I have no idea what Tom was thinking by this point. It didn’t smell the greatest. 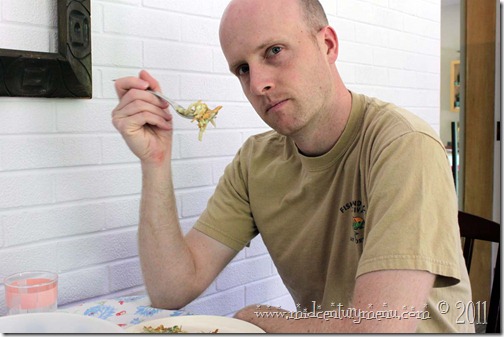 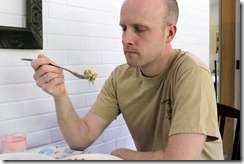 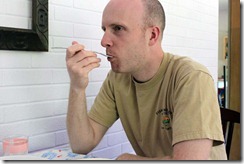 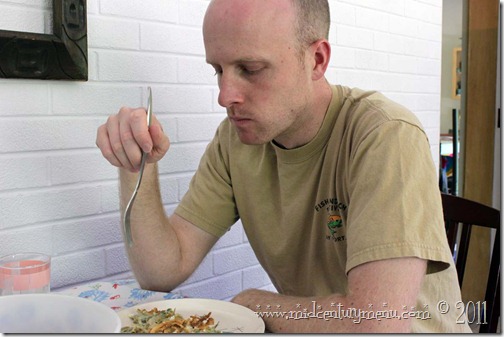 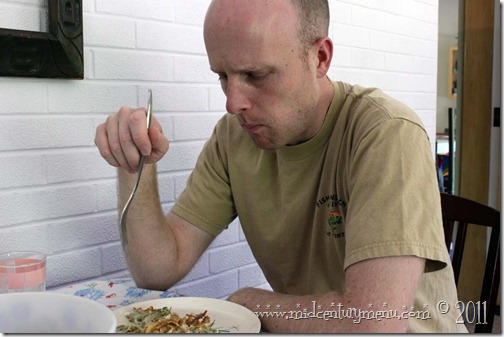 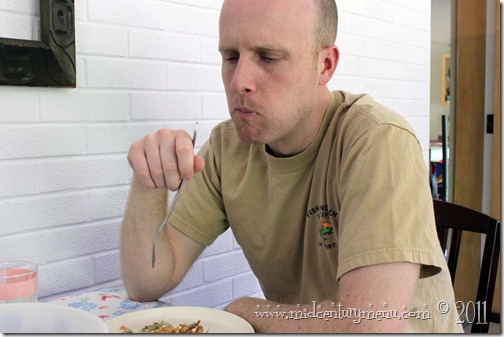 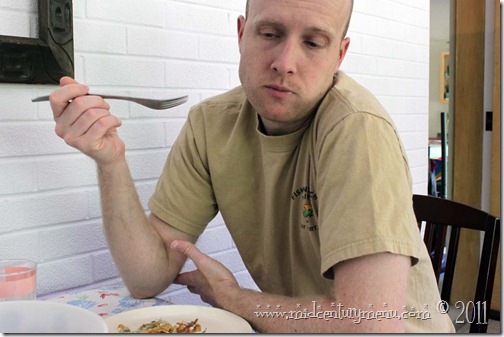 But I didn’t believe him. It was the moment I had been dreading. I scooped up a forkful, and brought it slowly to my curled-back lips. Would it be good, like Tom said, or was he lying to get me back for all of the times I had served him a gag-inducing mid-century meal? I wouldn’t put it past him.

Holy crap, it WAS good!

“See,” Tom said, smugly. “I told you it was good. In fact, I think I am picking this one for my favorite.”

The Verdict: Good! Surprisingly! What I normally dislike about green bean casserole, it’s blandness and canned bean taste, was kicked out the door by the tablespoon of horseradish. After baking the heat the of horseradish mellowed out to be a nice compliment to the fried onions. You could barely taste the tuna or the egg, what hit you most was the spicy and creamy white sauce. In fact, the only reason that this dish did not nudge Disneyland Tuna Burgers out of the “Best” Slot was because it was rich. Really rich. So rich you didn’t want to go back for seconds. But, since that is my only complaint, I am totally happy with this one, and think it deserves the title as “Tom’s Favorite Tuna Recipe”!