This is Fondue Au Fromage. 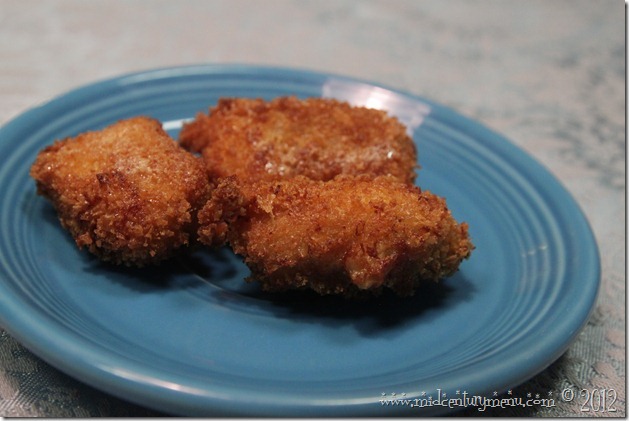 It looks like a plate of fried cheese, but don’t be fooled.

It is comprised mostly of soup and eggs.

If you have been following the blog at all these last few weeks, you will know by now that Tom and I foolishly decided to cook from a Lipton promotional book from the 1970’s for our New Year’s Eve buffet. Some of the recipes turned out well and some not so much.

This little gem was so bizarre it didn’t even get cooked up on New Year’s Eve. 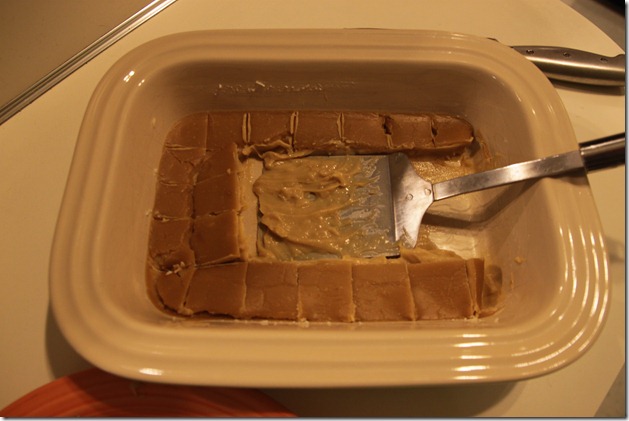 This is the pan of cheese goo that Tom made on New Year’s, but it took so long to finish chilling that we didn’t finish making it until two days later. Granted, it was chilled the next day, but it still hadn’t solidified enough for slicing. The second day, we had to make a command decision.

“Let’s make this cheese garbage before it starts to mold.”

And so Tom started cutting and scooping. 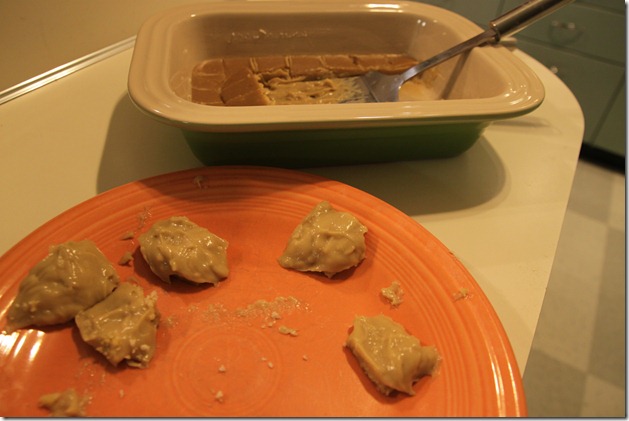 Saying that this did not look appetizing would be putting it rather kindly.

“This is horrible! Whose idea was this??”

I pointed my finger in Tom’s face. “This one was all your idea, Doctor. Make sure you bread them, too!”

I went back to making the edible part of our dinner, and listened for a while to the desperate scraping and the slap of cheese goo hitting Fiestaware. 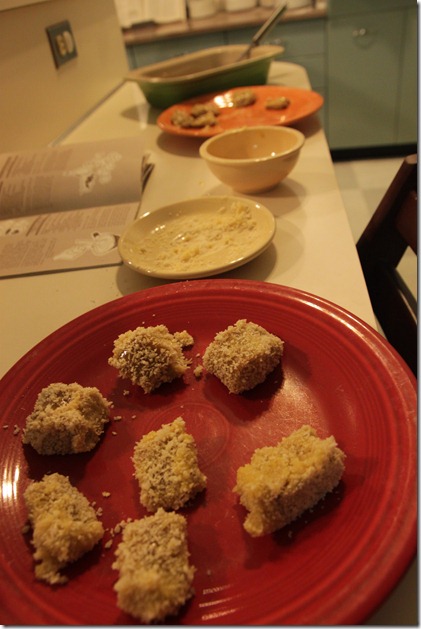 Finally, he heaved a sigh. “Done. I’ve made a plate of these things and I am not making anymore.”

“What if they turn out to be good?” 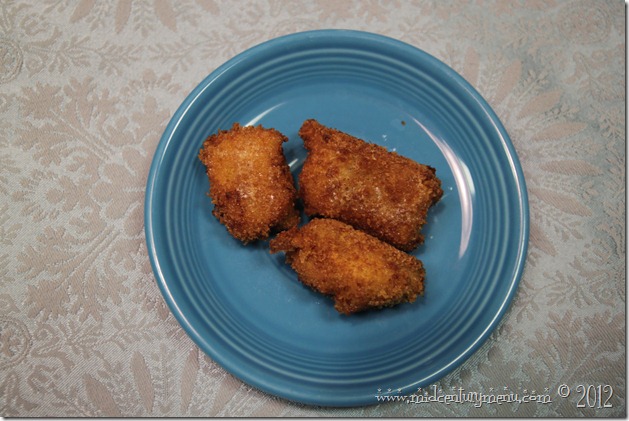 But I thought they turned out kind of cute.

Tom didn’t agree with me. 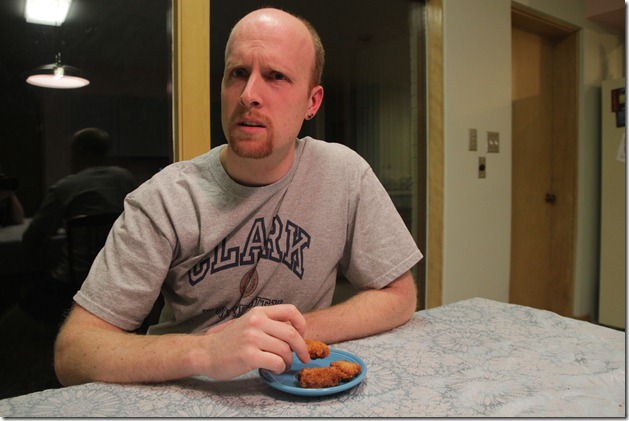 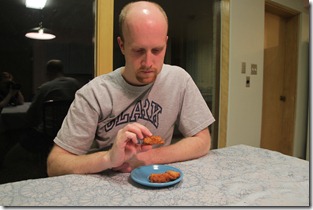 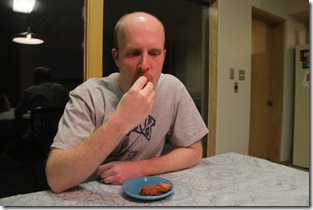 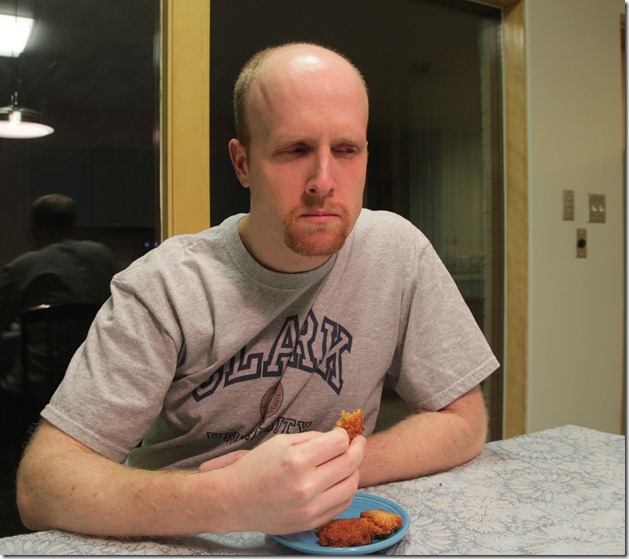 “I think I might actually be sick of onion soup mix.”

The Verdict: Pretty bad. They did have redeeming qualities, but not nearly enough for a sane person to EVER serve these to company. It was like eating straight onion soup mix. All other tastes were lost under the horrible power of onion. After that they had an unpleasant “goo” factor that tasted and acted nothing like cheese.

However, in the end we did find a way to overpower the onion soup. 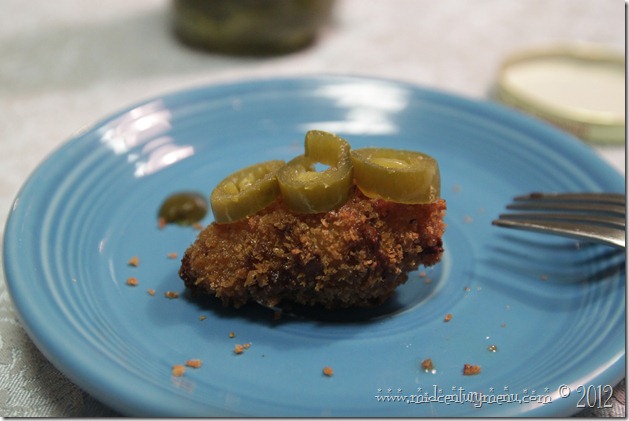 Yep, slices of jalapeno save the day, again. And yes, that is three whole slices. And this was on one of mine. Normally these are a bit hot for me and I can only have a few, so that has to tell you how strong the onion was.

If I was going to make these again, I would make some SERIOUS changes. First, I would halve the flour/butter/milk combo and sub in a brick of cream cheese. Then I would use cheddar cheese instead of swiss and add a bunch of chopped jalapenos and make jalapeno popper squares. 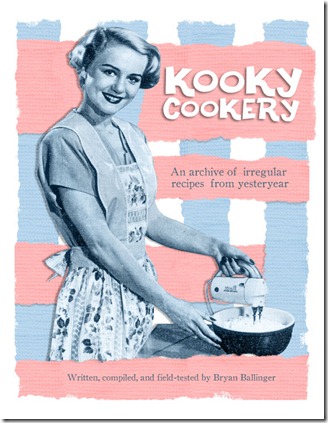 We are having a pretty awesome contest over at No Pattern Required. Tell us the worst thing you’ve ever eaten, and be entered in a contest to win a copy of Kooky Cookery by Bryan Ballinger!

The entries so far are pretty disgusting, so come on over to enter, or just to read about some horrible eating experiences!