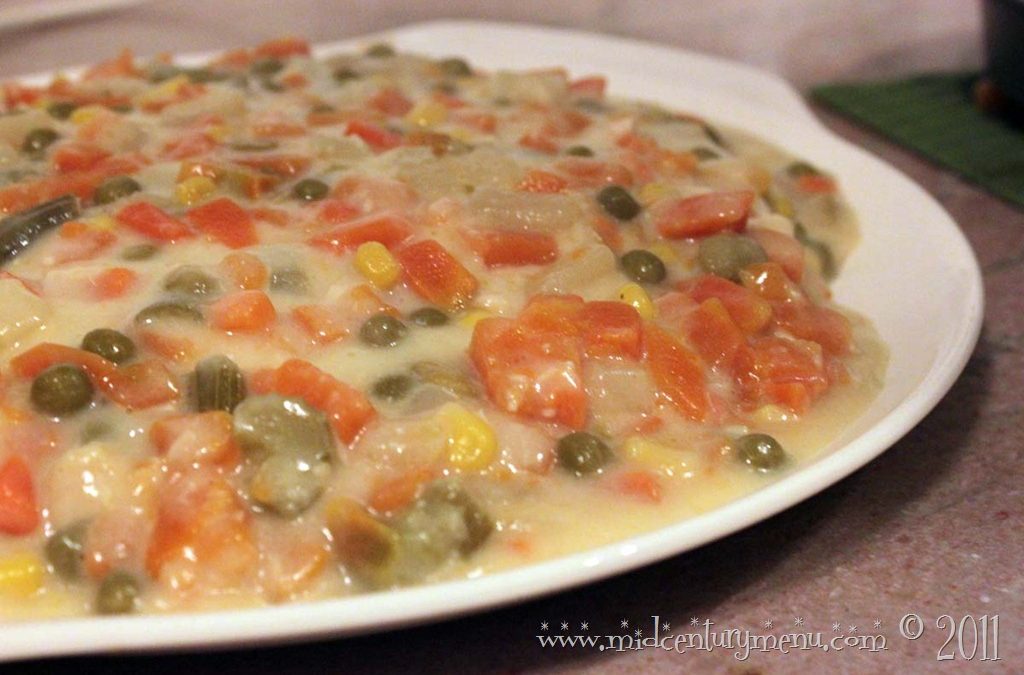 Well, it’s been a long and fishy road (literally) for our “Let’s Sing A Tune To Tuna” contest. We have tried every recipe, eaten some with gusto, choked down some others and decided which was the best and which was the worst.  But with this last finalist for our worst recipe, we have reached the end of the disgusting tuna-tasting road. And my taste buds couldn’t be happier!

Let’s all congratulate Erica from Retro Recipe Attempts on her disgusting finalist: Tuna Upside Down Bake. 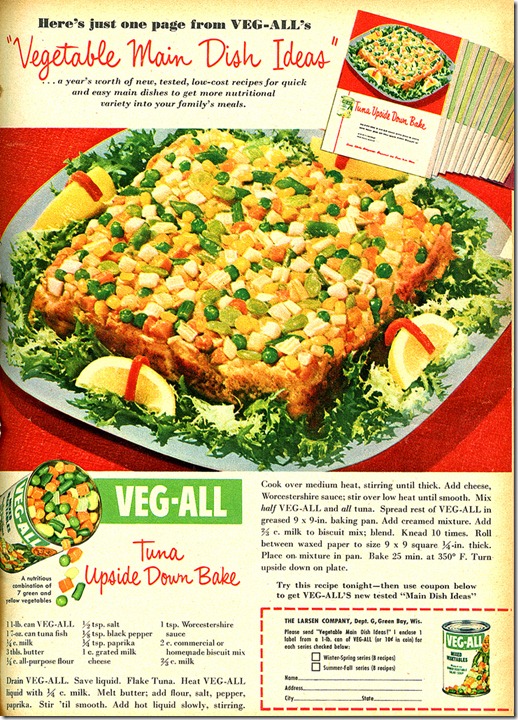 I had a few ideas, but I’ve picked out what is the most frightening to me personally. From the same canned vegetable company that invented the revolting Pie Plate Salad I made one time: Veg-All Tuna Upside-Down Bake

Wow. I have to admit, when I first took a look at this one, I passed it over for other tuna entries that seemed like they would be far more disgusting (Yeah, I was trying to get all of the bad ones out of the way first. Can you blame me?), but I have to say that when I took a closer look at the recipe, I realized this one was going to be a doozy. And not just because I hate lima beans. 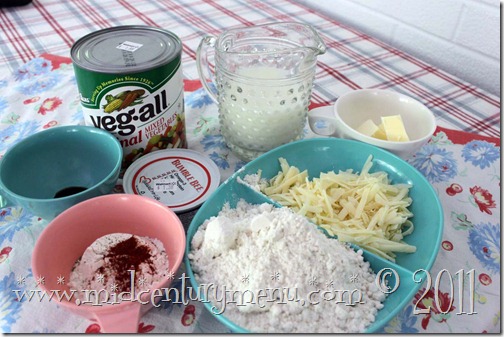 So, while I cooked this ridiculous recipe, I began to be intensely interested in the history of Veg-All. Sure, it looks cute from the outside, but inside it contains a confetti-like concoction of canned mayhem. And it led me to wonder: What exactly is in this happy little can, and how long have people been forced to eat it? 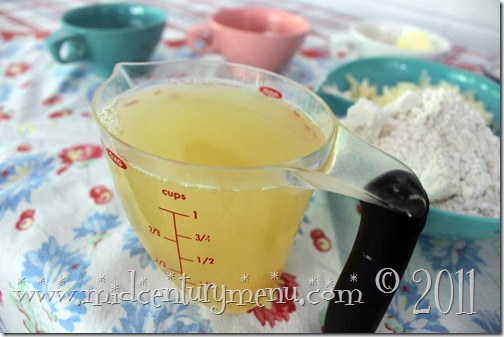 Luckily, the Veg-All website was more than happy to clue me in on this canned staple:

Wow, and there is the aforementioned light onion broth poured directly out of the can and waiting to be added into the “white” sauce. Eeesh. 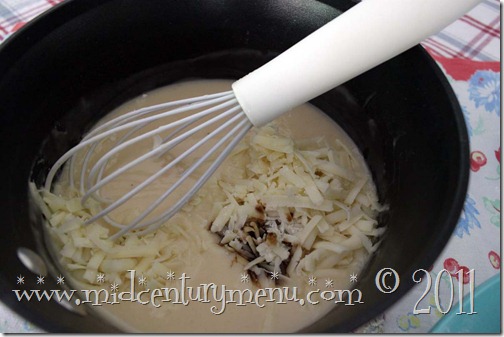 Anyway, here is more info from the on Veg-All site:

The year was 1926-the Delta Queen was paddling up and down the Mississippi; Winnie-the-Pooh (and Tigger too!) ambled out of the Hundred Acre Wood; and names like Stalin, Mussolini, and Hirohito were being uttered for the very first time. Busy households were embracing electric toasters, zippers, and the world’s first convenience food-Veg-All.
Veg-All consisted of ten “extra fancy quality” vegetables in one can, endearing itself to housewives with its promise of “no scrubbing, no peeling, no work!”

In those early days, Veg-All went all out in order to introduce itself to busy housewives. A coupon for a free can of Veg-All was published in Ladies Home Journal magazine. The nationwide free sample campaign was a huge success…garnering hundreds of thousands of new users. 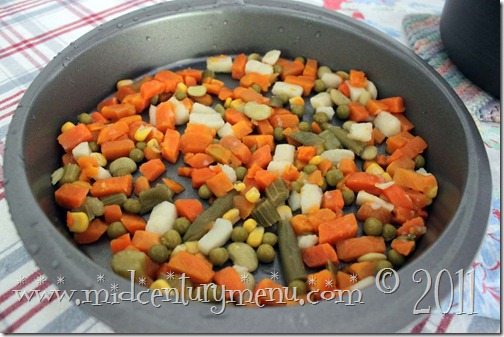 The 1930s saw the United States in the midst of a Depression. Because of its versatility, Veg-All was touted as the perfect recipe ingredient to help housewives prepare delicious, nutritious meals on a tight budget.
In spite of the Depression, life was made a little easier; the end of Prohibition and the arrival of the first home air conditioner and refrigerator were celebrated from coast to coast.
Other exciting events during Veg-All’s first full decade included President Franklin Delano Roosevelt being elected to two terms in office, the premiere of Walt Disney’s “Snow White and the Seven Dwarfs,” and the inventions of fluorescent lighting and Polaroid® Film.
As the ’30s came to a close, Veg-All continued to grow in popularity. It was marketed as a “fresh vegetable garden in every can,” and each can contained meal-planning ideas and three convenient recipes on the inside of every label. 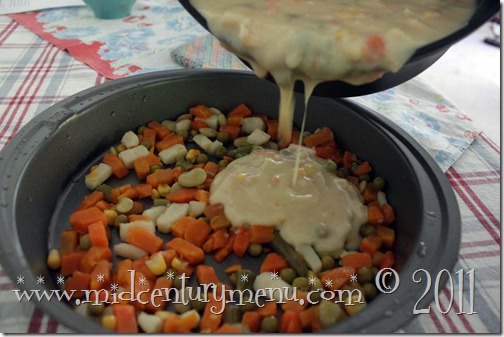 The ’40s. It was an era that witnessed the arrival of the atomic bomb to end World War II, an ushered in the invention of the automatic clothes dryer, the transistor, and the world’s first general-purpose computer.
It was also a time when the popularity of Veg-All increased dramatically. Seven out of every 10 cans of mixed vegetables sold were Veg-All, making it America’s most popular mixed vegetable. It’s a statement that still holds true today. 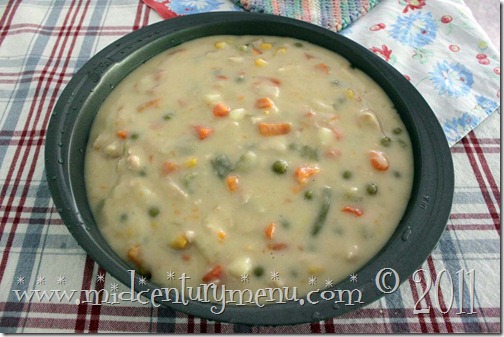 The 1950s were a time to celebrate families. Disneyland® opened in Los Angeles, American Bandstand and Rock and Roll concerts made their debut, as did Elvis, Dr. Seuss, Charlie Brown, and Smokey Bear.
During the 1950s, Veg-All changed its recipe; instead of 10 mixed vegetables, each can now contained seven. Okra, pimento and onion were taken out, leaving carrots, potatoes, celery, peas, beans, corn, and lima beans. A light onion broth was added to enhance Veg-All’ flavor. It’s a tasty combination that is still in use today.

Wow, fascinating stuff, huh? And if anyone is still awake out there, answer me this: Why couldn’t they have left in the onion and pimento and taken out the lima beans??? Why? 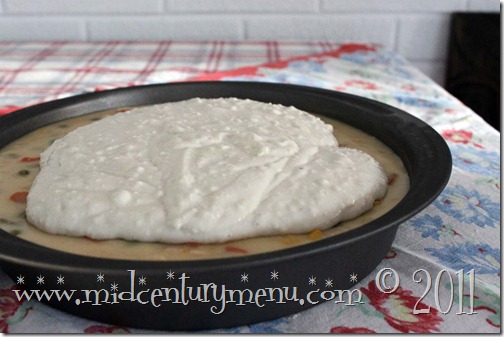 But back to the matter at hand, which would be this freaky upside down bake.

Now, as you can see, my biscuit mix turned out really, really runny. I am not sure why. Maybe because my box of Bisquick was really old, or maybe it is because of the difference between old Bisquick and modern Bisquick, but the Bisquick was more pourable than rollable, so I just poured it on top and spread it out. 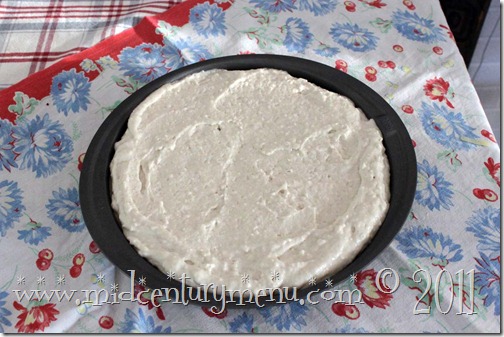 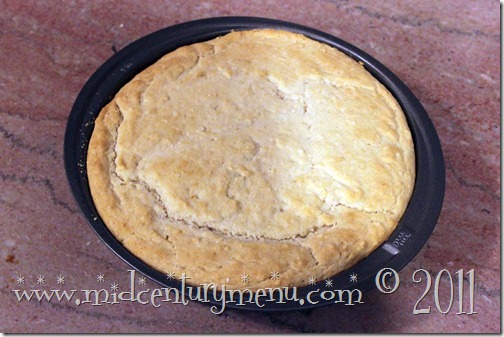 Not too terrible at all. In fact I think this might even work out if… 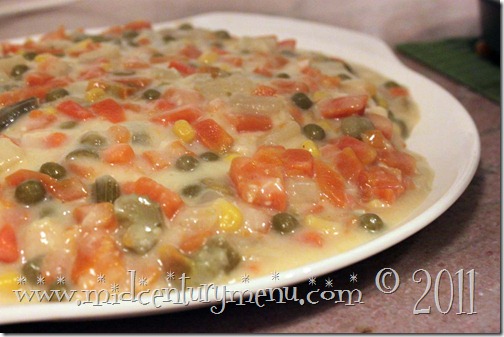 Or not. Wow that’s…really gooey. 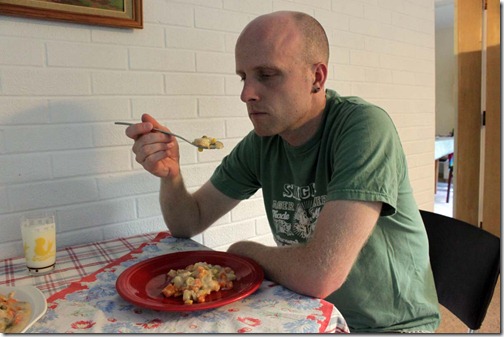 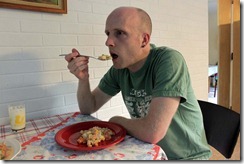 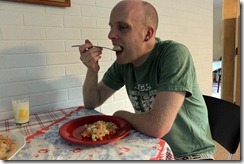 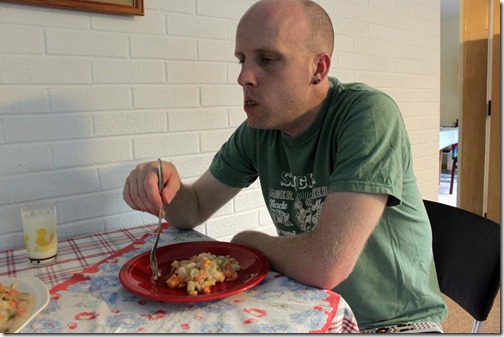 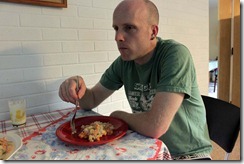 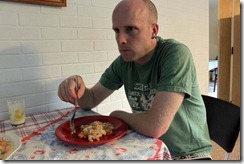 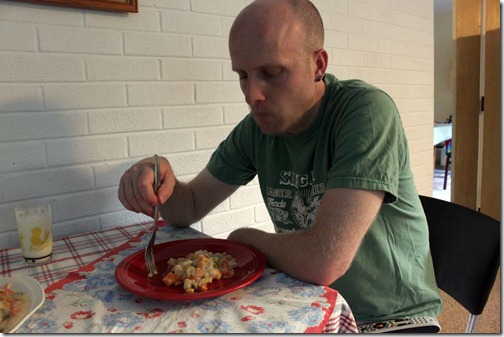 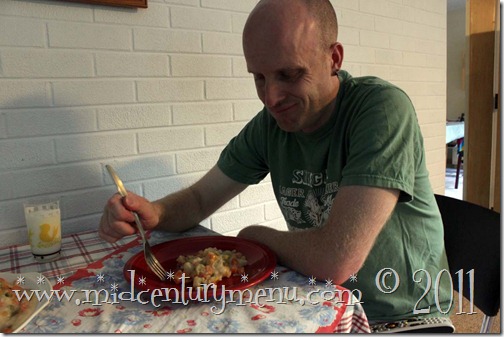 “It’s not great. It is mostly bland, and has a weird aftertaste.”

I took a bite. It was bland, and then it tasted strangely of canned things. All in all, pretty gross.

The Verdict: Gross. Mostly bland and tasteless, and what taste it did have was courtesy of the Veg-All veggies, canned onion juice and Bisquick. Which is NOT a good combo. And there were technical difficulties as well. The “white” sauce probably could have been cooked more on the stove to firm it up a bit (my fault), and if the Bisquick mixture would have been the correct consistency, maybe it would have looked more upside-down cake like instead of looking like someone barfed mixed vegetables on a plate. But the cruddy taste makes a second attempt at this useless.

Well, that’s it for the “Let’s Sing A Tune To Tuna” Finalists! Come back next week to start voting on the winner of the worst tuna recipe!