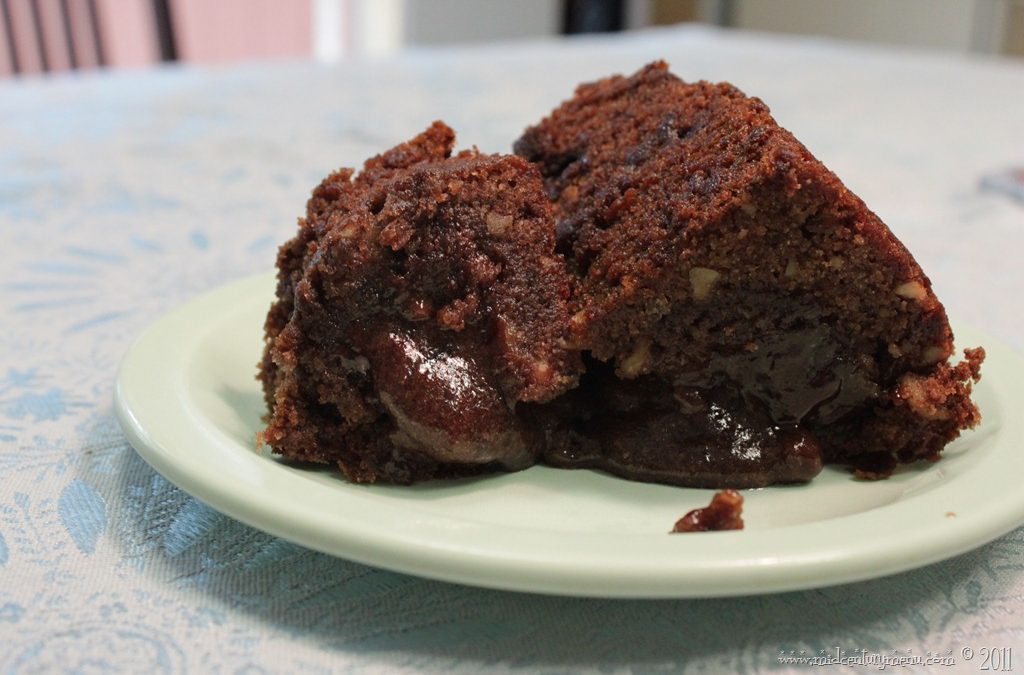 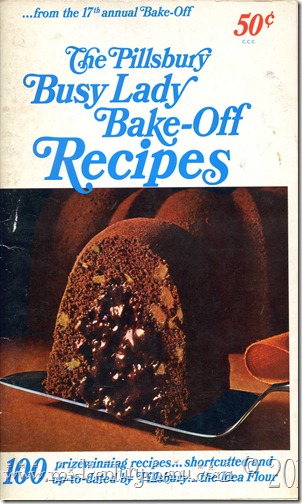 All Hail the Tunnel of Fudge Cake! Not only does this amazing cake have a hilarious name (snicker) and an impeccable Mid-Century pedigree (it was a runner-up in the famous 1966 Pillsbury Bake-Off) but the darn thing is magic.  It is the original cake that makes its own ribbon of fudgy goodness in the CENTER of the cake as you bake it. Miraculous AND delicious!

Sadly, the Tunnel cake is also infamous.  The original recipe from the 17th Annual Bake-Off cookbook calls for a product that is no longer in production: Pillsbury’s Double Dutch Fudge Buttercream Frosting Mix. The discontinuing of this mix has led to a great deal of wailing and gnashing of teeth. People who grew up with the Tunnel cake and loved it have been searching for a substitute for the frosting mix for years, much to the bafflement of Pillsbury execs. After all, they revamped the recipe and posted it on their website. They even added a chocolate glaze. They claim the frosting mix was just a bunch of cocoa and powdered sugar with no other special ingredients and you can make the cake without it. But people are still searching for that perfect Tunnel of Fudge cake recipe, and are subbing everything from the above-mentioned powdered sugar/cocoa combo to brown sugar to powdered drink mixes, some recipes even “cheating” by spooning in a pre-fudged layer into the cake to make it seem like the old magic is back. 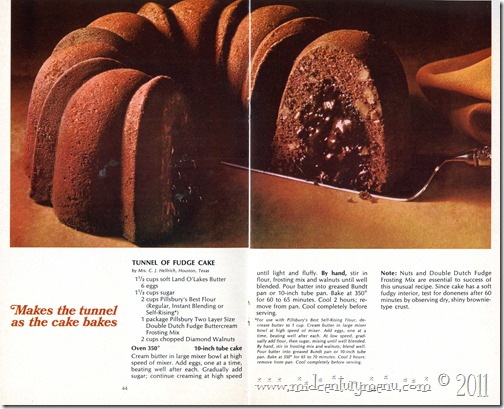 5.0 from 8 reviews
Print
Tunnel Of Fudge Cake
This is the original recipe!
Ingredients
Instructions
Notes
Warning! This cake is like baking brownies! If you overcook the cake you WILL lose the fudge tunnel in the center.
3.1.07

I have been studying Tunnel of Fudge cake recipes for two years now, dissecting and decoding, trying to find exactly the balance between sweet and tooth-aching sweetness and sufficient magic fudginess to recapture the Tunnel cake spirit. And that isn’t just the spirit of what’s in the recipe. It’s spirit of dumping a bunch of stuff in a bowl and having something magical come out. The actual Tunnel cake experience, not just the revamped hybrid cake. You know, the one with glaze.

And then, I caught a break.

You know what it’s like when you have walked past something a thousand times without actually seeing it?  Without actually looking at the details because you don’t expect anything has changed since the last time you looked at it? Like when you are walking down the hall, past the shelf that you put up 5 years ago that you filled with little ceramic animals and suddenly you look at it. Really look at it, and you think, “Where the heck did that duck with fangs come from?”

I was walking down the baking aisle of the grocery store the other day and I started to buzz past all of the boxed mixes like I usually do.  If I don’t, I usually end up with three different kinds of brownies in the cart and 5 pounds heavier by the end of the week. But this time I slowed down for a minute, and started to skim all of the different kinds and flavors. Then my eyes caught on something, and I came to a screeching halt. 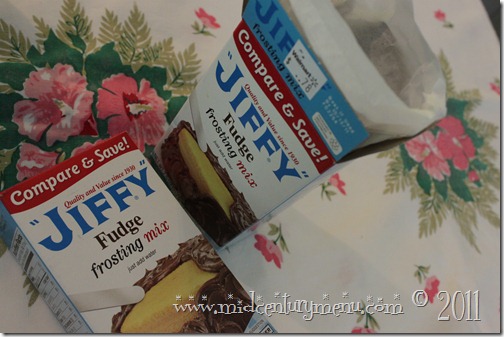 Then the Tunnel of Fudge angels in heaven started singing, and I knew I had stumbled across the old magic. 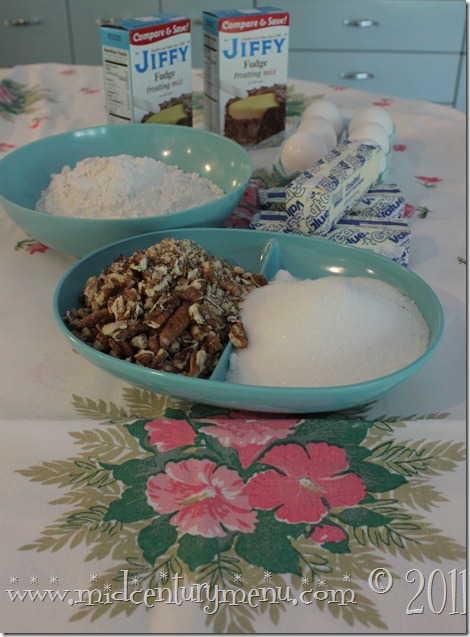 “Of course,” I thought, “Jiffy still makes frosting mix! Jiffy! Why didn’t I think of this before?”  And I had no answer for myself.  It seemed like it would be the logical thing to think of. Jiffy mix has been around since the beginning of time (read: 1930). I remembered Jiffy having fudge frosting mix when I was little, AND that Jiffy was one of my mom’s favorite brands to buy. Mostly because it was cheap. But their corn muffin mix is one of the only boxed mixes that I buy regularly.

And I was more than content with using Jiffy frosting mix in my Tunnel cake. 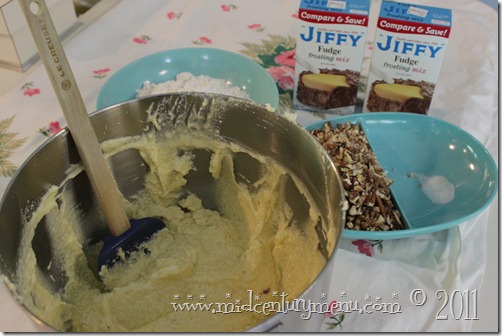 This was it. I was going to make this cake, this cake with 3 sticks of butter and six eggs in it, and then I was going to dump in boxes of premade frosting mix and watch the magic happen. It was going to be the complete 1966 experience, with no updated recipe and only a small substitution of a brand name. 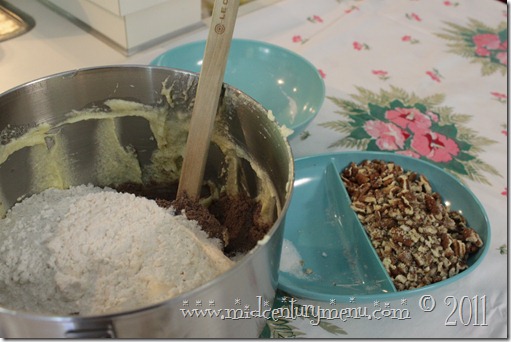 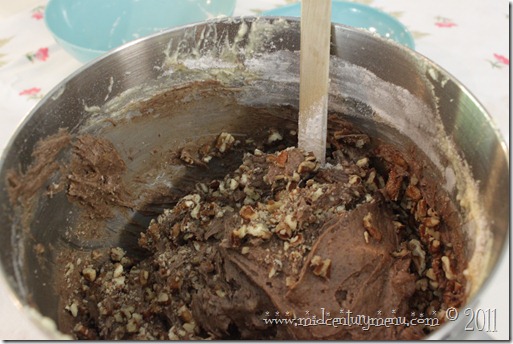 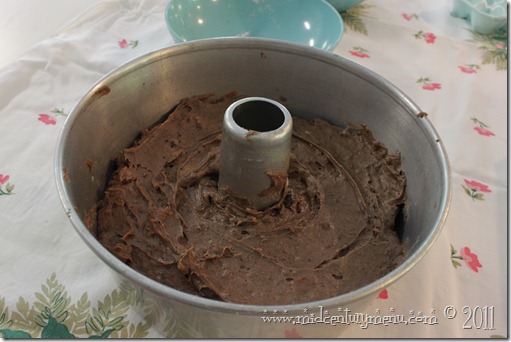 By the time I got it in the oven, I was pretty impatient for it to be done.  But I had a three hour waiting period to endure. First, the 60 minute baking time. Then the 2 hour cool down while the mysterious fudge came into being.

Meanwhile, this was the conversation in the kitchen: 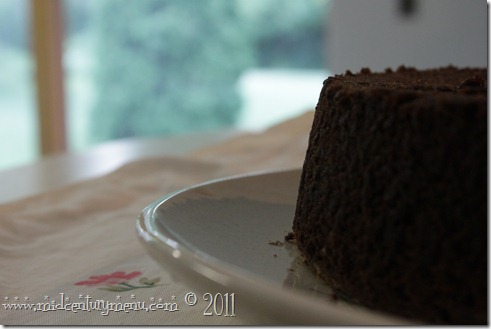 We settled in with a DVD of Streetcar Named Desire to entertain us and low fat ice cream sandwiches to keep our sweet teeth happy.  But Tom kept coming in the kitchen to refill his lemonade, and every time he found me already there, staring at the cooling cake, mumbling to myself about how long two hours really is.

Finally, after Blanche had gone completely crazy and I had stopped swooning over the dresses, the cake mostly cooled. (It was still pretty warm, though!)  This was it. It was finally the moment of fudgy truth.

I cut the cake carefully, lifting out a slice and craning my neck, my view blocked by my serrated knife. 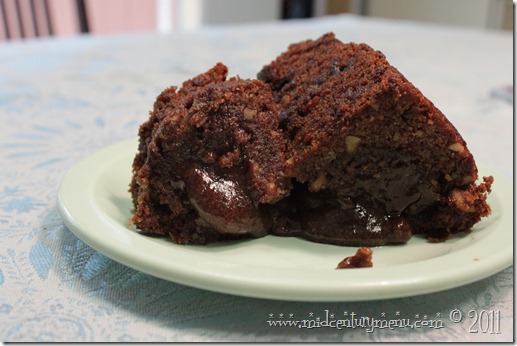 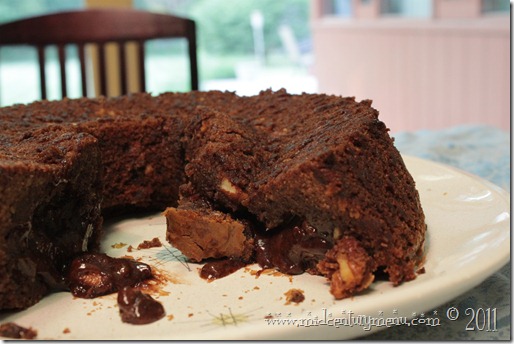 I was so excited. This was it! It had really worked! Even as the cake started to collapse, the fudge on the inside still too warm and starting  to run out of the center, I leaned over and breathed in the smell of success. It was slightly chocolaty, with a hint of toffee, and very, very sweet. 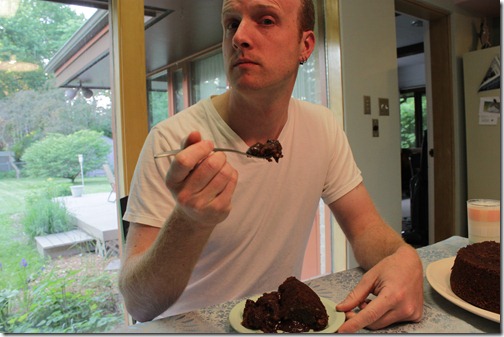 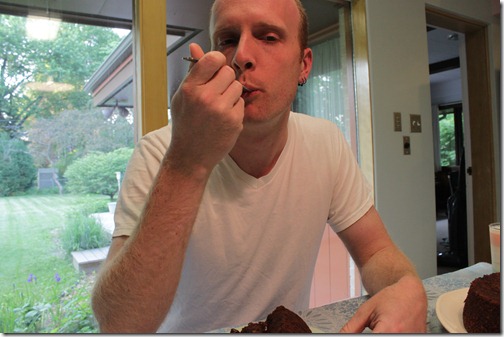 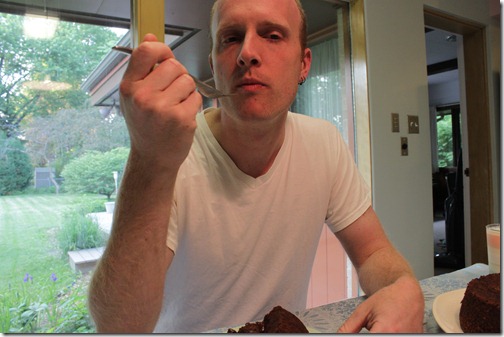 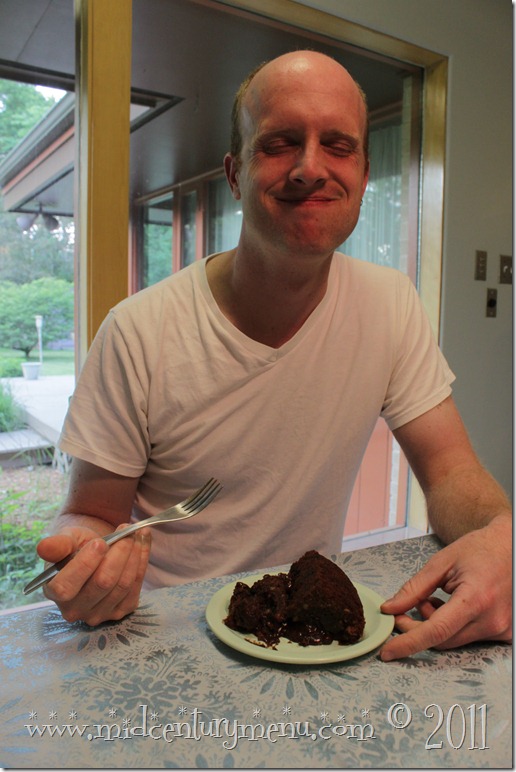 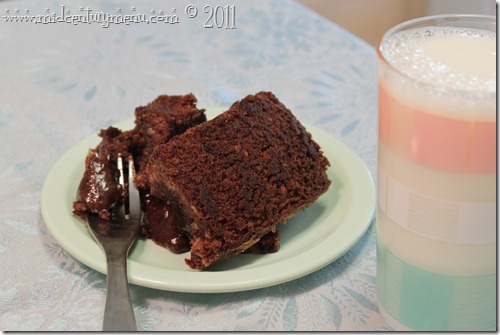 The Verdict: Success!!  The texture of the cake was perfect, exactly what I had hoped it would be.  It had a toffee taste (probably from the cups and cups of sugar) and was chewy, with the fudge center thick and gooey even when completely cool.  The only bad thing I can think of saying is that there wasn’t a rich chocolate flavor to the cake, which could probably be easily fixed by adding some extra cocoa powder in with the frosting mix. But only if you want to mess with it. To me, it tasted absolutely perfect. Tunnel of Fudge magical.

*UPDATE: There has been some confusion about the texture of the “fudge tunnel” inside the cake. When you are making it, try not to think of it as cake, try to think of it as brownies. If you pull brownies early, they will be gooey. If you let them bake too long, they will firm up. The same applies to this cake. If you want the molten center, pull the cake early and cut it hot. If you want it to be more firm, leave it for the entire baking time and let your cake cool completely before cutting.