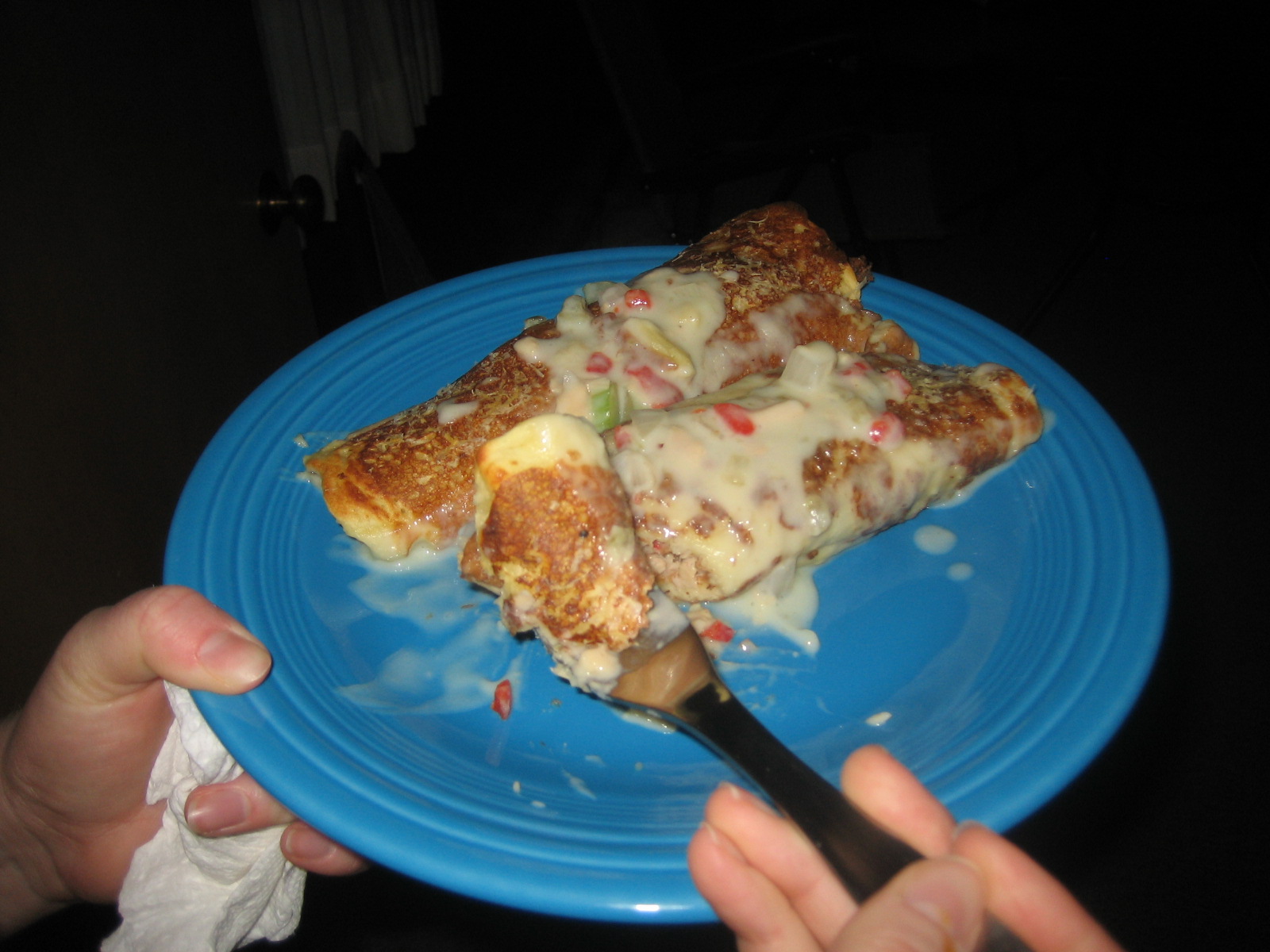 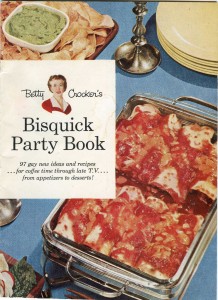 Hello, everyone!  Welcome to Mid-Century Menu, the weekly Wednesday post in which I pick a mid-century recipe to cook and serve for dinner from my vast collection of vintage cookbooks.  And it is usually an “interesting” recipe.  Interesting as in, who would have ever thought of putting those things together?  And why?

This week’s Mid-Century Menu comes from the Bisquick Party Book, another great cookbook inherited from my grandmother. The publishing date on this one is 1957, so you know we are in mid-century flavor country now.  So to speak.

The fairly weak premise of this book is basically snacks and party dishes that you can make using Bisquick.  Most of the book is taken up with appetizer recipes that use the biscuit version of Bisquick.  I have to admit I am really excited to make a snack spread with some of the recipes in this book and then invite unsuspecting friends over to try them. Muaahha ha ah! But that will have to wait for another month. 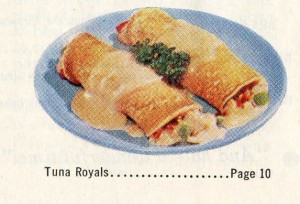 This week I decided to pick from the “Party Pancakes and Waffles” section of the book, which is only two short pages.  Apparently there aren’t too many versions of party pancakes that made the cut for this book.  So we can assume that the ones that made it are good, right? Right?

Not really. Ladies and gentlemen, meet “Tuna Royals”, the tuna salad wrapped in a pancake and then baked in the oven. Tuna Royals have the dubious honor of being the first Mid-Century Menu recipe dinner that I actually COULD NOT finish.  But more on that later. Let’s get right too it and jump into the recipe. 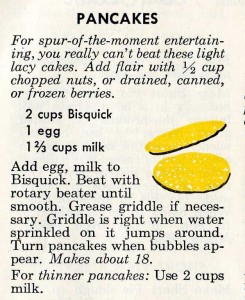 The first part of Tuna Royals was, of course, cooking up a big bunch of the thinner version of these Bisquick pancakes.  Gotta cram all the Bisquick in we can!

The recipe claims these cakes were supposed to be light and lacy, but mine definately didn’t turn out that way.  I either must not have added enough milk, or Bisquick has changed, because I ended up with 7 completely regular 5 inch pancakes instead of the 10 lacy cakes I was supposed to end up with.

However, it all turned out well in the end, since I wouldn’t have had enough room in my baking pan for more, anyway.

I am sure you have all seen pancakes being made, but for those if you who haven’t, here is the procedure: 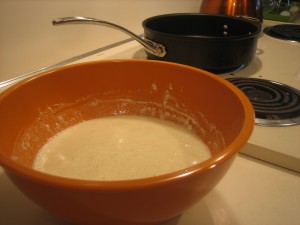 The pancake batter, ready to go.  And yes, I did put 2 cups of milk in it, it just didn’t turn out right… 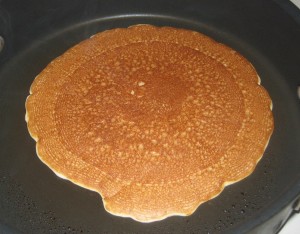 The large cakes cooking in the pan.  On second thought, I guess they do look lacy.  I guess I was thinking that lacy meant light and lacy.  Not looking lacy but still weighing a ton.

Ok, pancakes completed. Now on to the actually recipe.

Yeah.  Just in case condensed soup isn’t thick enough, let’s reconstitute it with a lot of milk and then thickenen again it with more Bisquick! It’s win-win!

In my opinion, that is where this recipe really goes wrong.  Once again, more on that later. 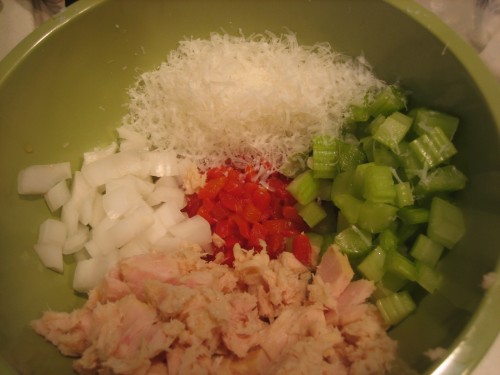 The ingredients for the tuna filling, hanging out in the prep bowl.  In all honesty, the filling was actually good.  I kind of balked at so many pimentos, but it all turned out ok in the end. 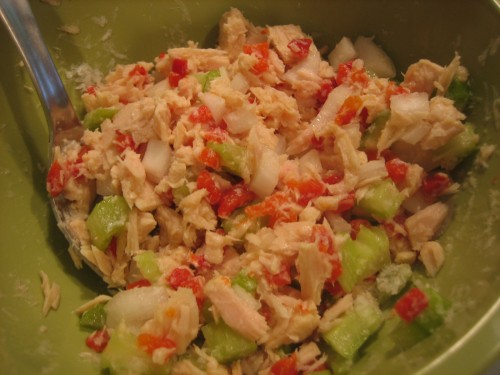 The filling, all mixed together.  I ate a spoonful of it and laughed happily because it was edible.  Hubs was busy laughing over the “sauce”, which looked like this: 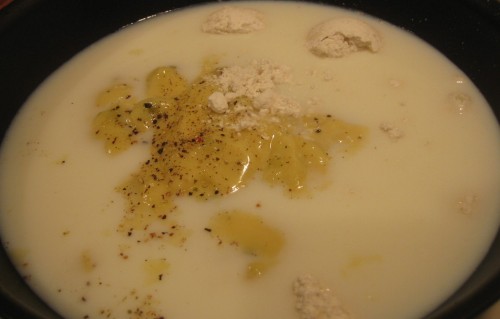 Yes, it IS cream of celery soup with Bisquick in it! Wow. Cooked down, the sauce didn’t thicken nearly as much as I would have hoped. 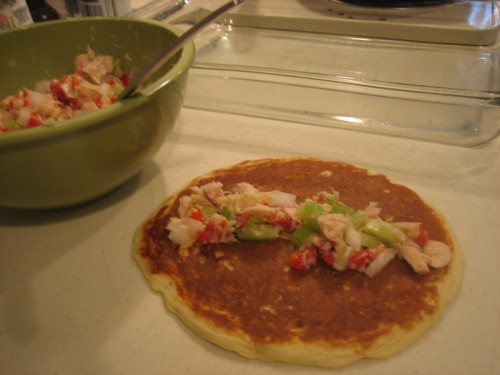 Assembling the “royals”. It wasn’t difficult at all, so that is a point in this recipe’s favor.  I thought all of the pancakes would split apart, but it actually worked out well… 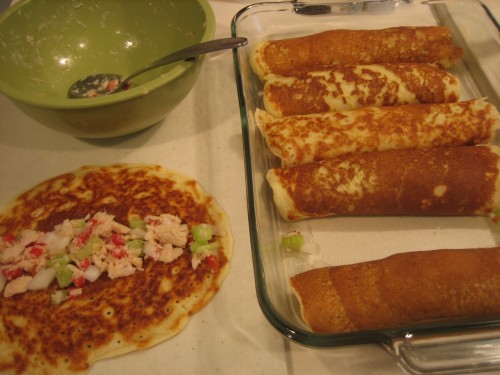 I could only cram 6 in the pan.  It was probably because my pancakes were too fat, but that wasn’t my fault! It wasn’t! I swear!

And now, the moment you have all been waiting for.  It is always with an awed, hushed silence that we contemplate the picture that we all have been dying to see….which is…. 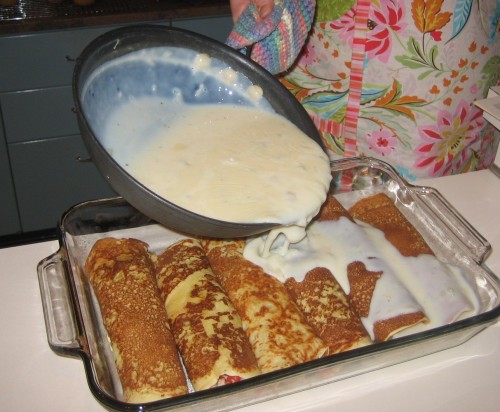 …the moment the dish is ruined. Permanently. The celery soup “sauce” was far too runny, and immediately started its active destruction of the dish.  The pancakes became soggy and began to fall apart, leaving tuna filling leaking out onto the bottom of the dish. 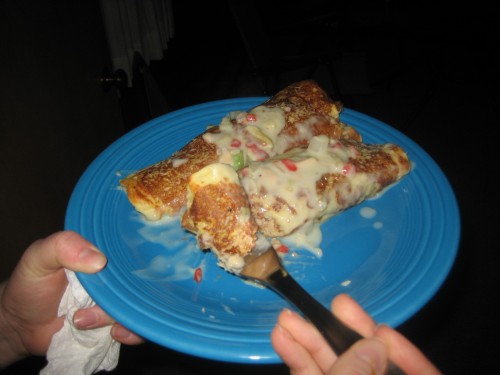 About to take a bite.  Notice how I have taken the filling that was falling out and threw it on top of the pancakes.

Ok, now we finally get to it.  I ate this bite, and another one, and then I couldn’t eat anymore.  First of all, the pancakes were way, way too thick.  It would have been edible if the pancakes would have been much thinner and maybe a little crispy.  The texture was just all wrong.  Which led to the next issue, I think.  The thick texture made the pancake soggy and nasty when covered with the soup, and not good soggy like when they are soaked with syrup.  The cream of celery soup was mostly tasteless, having been thinned by so much milk, and I couldn’t choke the combination down.  I ate the filling out of the pancakes, and then left the rest for a starving Hubs.

Hubs, on the other hand, ate the entire pan and then most of my soggy pancake leavings.  He thought they weren’t bad, since soggy things don’t really disgust him the way they disgust me.  Since he was pretty insistent that they weren’t bad, I am splitting the verdict for him.

If I were crazy enough to make this recipe again, I would totally change elements of the recipe.  First off, the pancakes would be much thinner and lighter, kind of like a crepe.  And if I would use cream of anything soup, it would only be thinned slightly, not thinned and then thickened again.  It was a useless step, and in my opinion, the fatal one to this dish.

Hope you enjoyed this week’s horror!