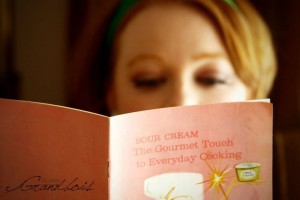 Have you ever looked at a recipe in a mid-century cookbook and thought, “Ew. That is so nasty.” But you couldn’t stop looking at the recipe.  Or thinking about it. As time went on, you kept going back to the book, thinking,  “I wonder what it tastes like?”

My husband, Tom and I had those thoughts all the time, until we decided to do something about it in March of 2009.  Now we make one crazy mid-century recipe every week, eat it for dinner, and document the whole thing for you, the readers, right here on this blog.

First published on my other blog, No Pattern Required, the Mid-Century Menu has gotten some press, both good and bad.  Some good reviews and a whole lot of bad ones.  Some say it is a waste of time and energy, but Tom and I don’t think so.  Why? Well, like it or not, these horrible recipes are part of the culinary evolution of our country.  The pilgrims didn’t just come across the water on the Mayflower with their heads stuffed full of Asian fusion cuisine. It was a long, painful and sometimes disgusting road that lead to our current national gourmand status. Most people like to forget about it. I think we should embrace it. Yeah, at one point it was the height of fashion to have sour cream mixed with powered french onion soup mix at your party. Let’s acknowledge it and be proud.

The culture of post-war America was rife with enthusiasm for the new and improved, the do-everything gadget, and prepared foods in a can. This attitude invaded everything, and housewives were treated to something they had never had before: a short-cut for dinner. Some of these shortcuts worked, and some of them didn’t. We all know about the ones that did. They are with us in the form of Bisquick pancakes, tuna noodle casserole and even the aforementioned French Onion dip.  But what about the stuff that didn’t work out?  Ketchup as a quick sundae topping. A salad suspended in Jello. These are the things this blog seeks to acknowledge, and to drag out of our collective closets and into the bright light of day.

Mentions of The Mid-Century Menu in the Press