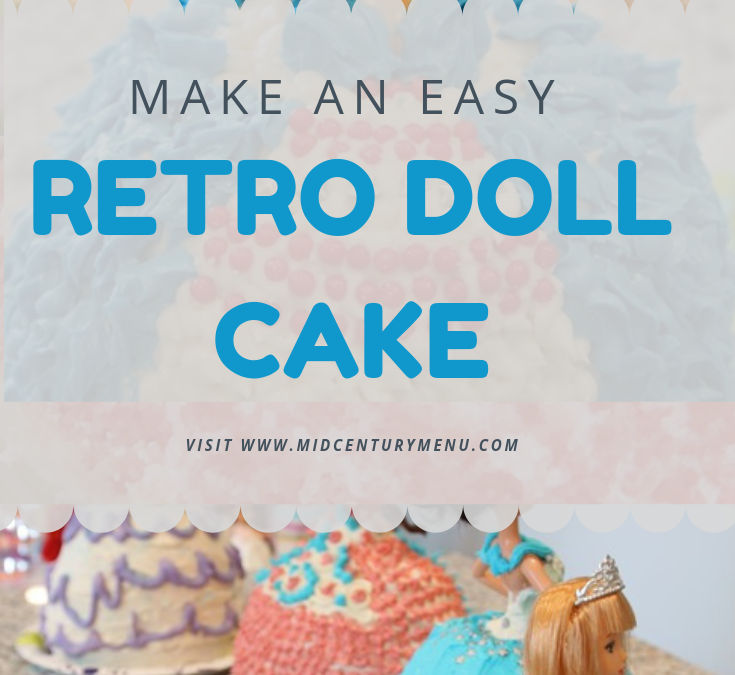 How many of you have ever had a doll cake for your birthday? Or for your bridal shower?  I never had a doll cake (though I did have plenty of lambs, rabbits and even a coveted McDonald’s birthday cake), but I always loved to look at pictures of them. And for the longest time I thought the doll was actually baked into the cake. It was a disappointing day when my mom explained that it was just a regular Barbie doll shoved into cake. And here I had been trying to figure out how the baker made the doll hair! 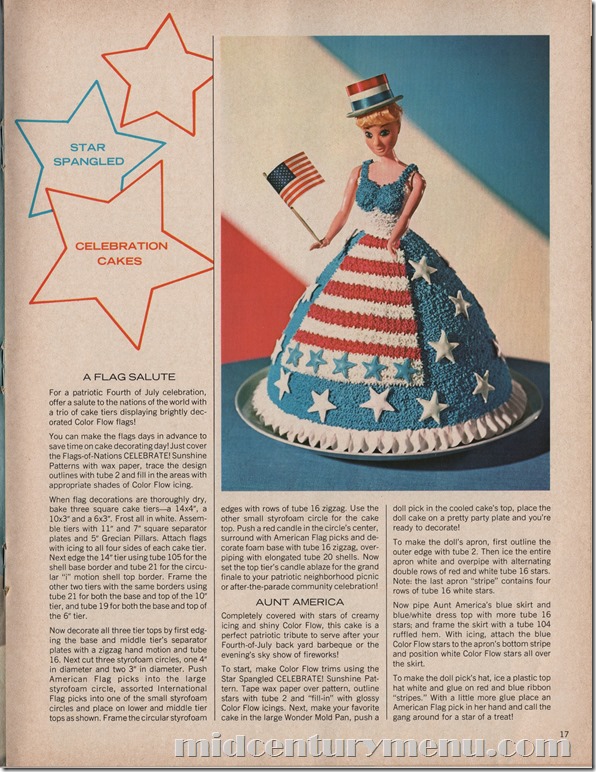 A couple of months ago, I came across this beauty in a Mailbox News magazine. It brought back all kinds of memories of my childhood questions. How hard is it to actually make one of these? Are they difficult to decorate? Would it really be as fun to make one as I always thought it would.

So I sent the photo to Carolyn and asked her if she wanted to help me make it for July 4th. She said yes she would help me, but she didn’t think the 4th of July was a good idea. She thought we should make a ton of cakes and have everyone decorate them in different themes. Because apparently one doll cake isn’t good enough for Carolyn. She wants allllll the doll cakes. Luckily, Alex’s birthday was coming up, and it wasn’t too hard to convince Alex to have a doll themed party. The discussion went like this:

“I already practiced my violin.”

“I appreciate that, but that isn’t what I wanted.”

“You know how you were telling me you wanted some Barbie stuff the other day?”

“Yes. I want the one with the black curly hair, and the dog that has puppies, and the mermaid, and –“

“Yup, got it. But I was thinking, do you want to have a doll-themed birthday party, too?  We could give out dolls as favors and have a bunch of doll-shaped cakes and –“

The screaming went on for some time after that. In the end we decided to have a Barbie Princess Party, and that kids as well as adults would be able to decorate doll cakes.

So I got busy baking. 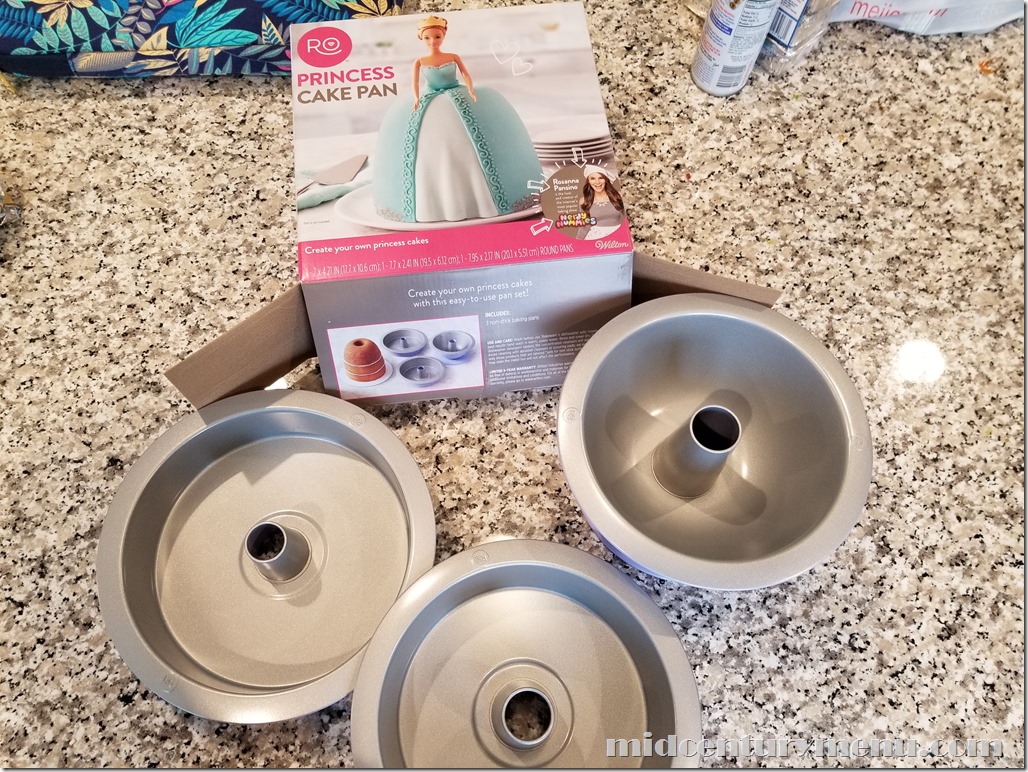 Even though I have several hundred gelatin molds (or enough that they seem to be multiplying like rabbits), I did not have a vintage doll cake pan. I checked out eBay and Etsy and surfed around a bit, but I couldn’t find one I liked. They all seemed like they would be a pain to bake because of the depth of the dress-shaped pan. So in the end, I just bought a new one. I decided to get the doll pan from Ro who does Nerdy Nummies on YouTube, mostly because she loves doll cakes like I love lamb cakes. And I can respect that. Also because her mold is three separate pans that you bake and then put together. Which I thought was a great idea. And just for the record, I do not know Ro and I bought this with my own money. 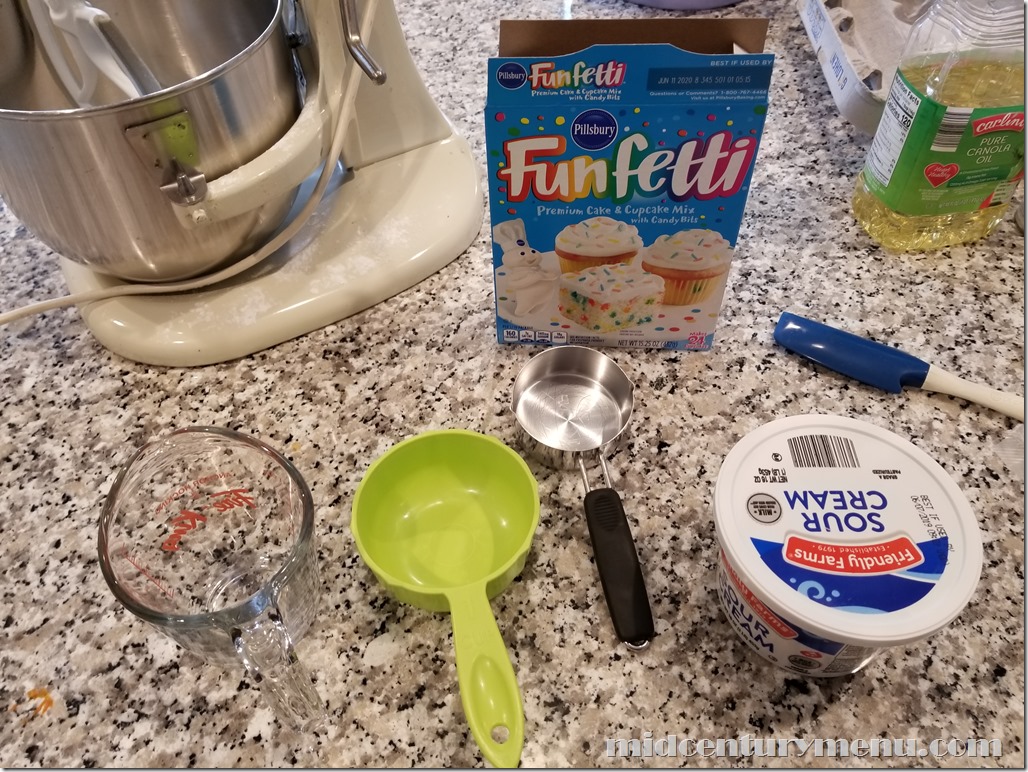 Speaking of lamb cakes, I ended up using the lamb cake recipe that I tested last year that used a cake mix as a base. i wanted something with a heavier texture, so pretty early on I decided to use a lamb cake recipe. And I needed to make a ton of cake, so I didn’t want to make a from scratch cake recipe about 10 times over. Especially after I figured out that Ro’s doll pan holds TWO cake mixes. 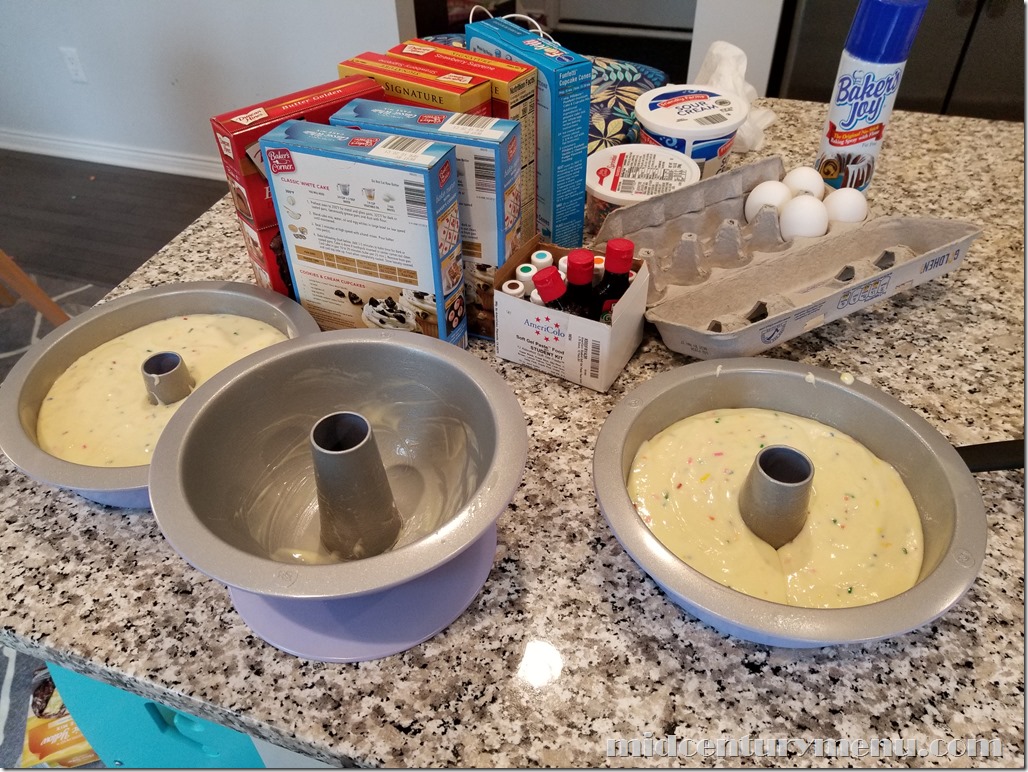 See? This is one cake mix, and pans are NOT full. 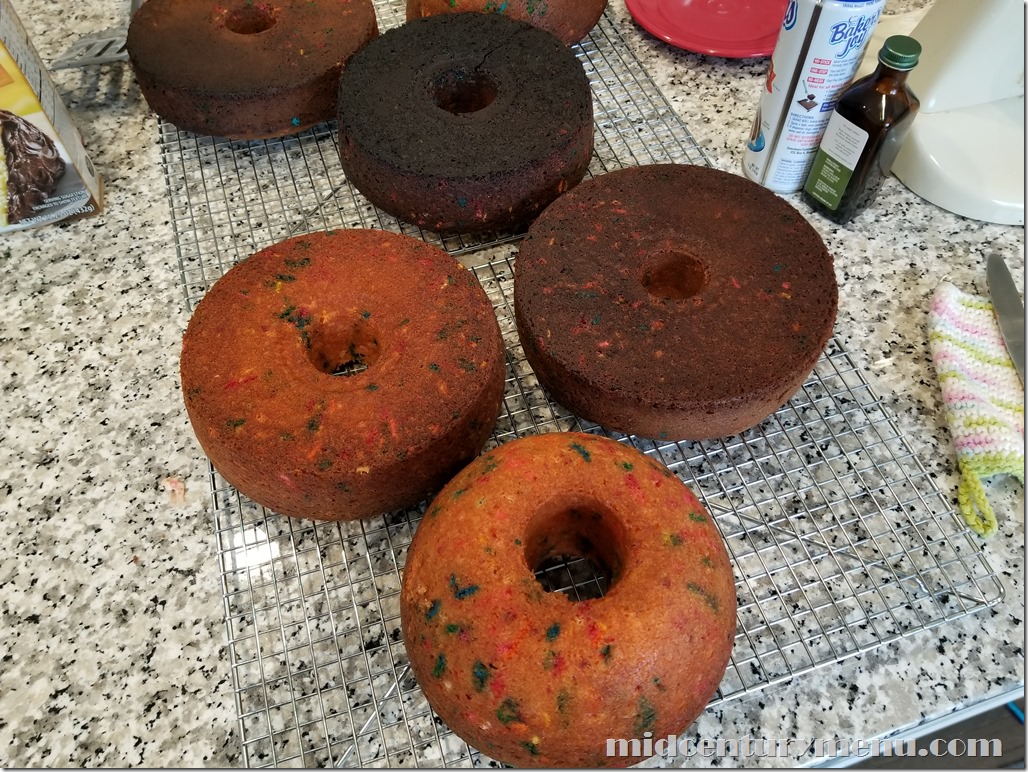 My new oven also runs very hot, so it took a bit of experimenting to get all the cakes done at the same time. During the experimenting and subsequent burning, I also figured out that two cake mixes is just slightly too much batter. 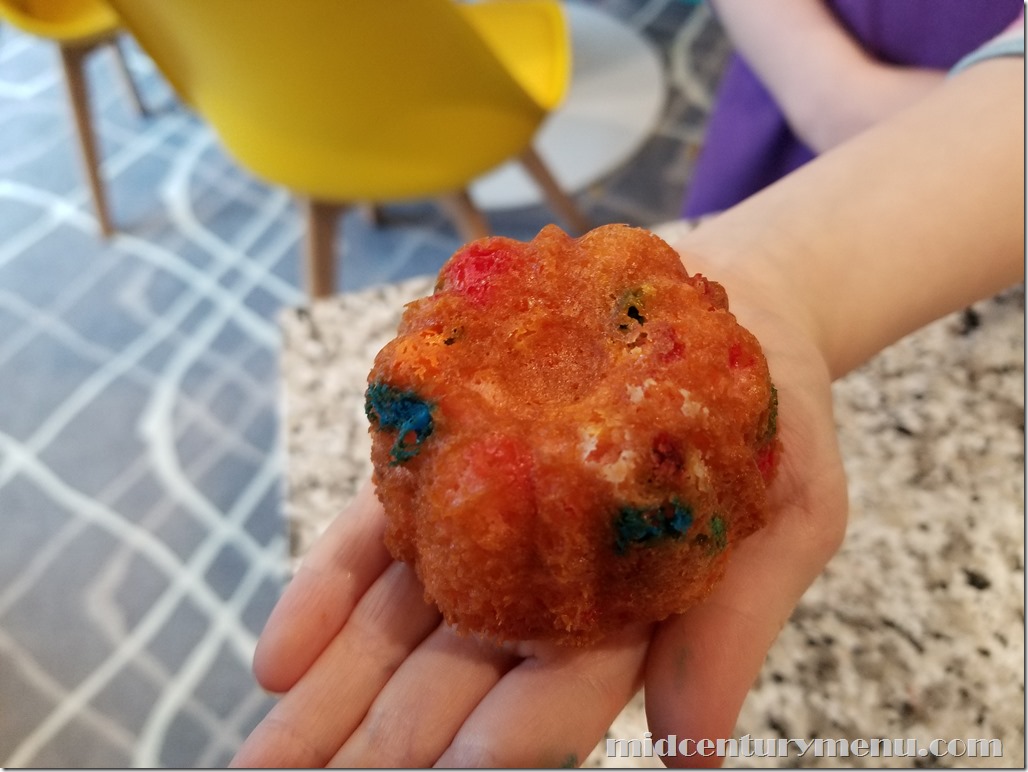 It was more like two cake mixes minus about 3/4 cup of batter. So I took that extra bit of batter left over every time I made a doll cake and used it to make some baby angel food-shaped cakes and some even smaller baby bundts. I decided to stack these to get the height and shape I needed for the mini dolls. 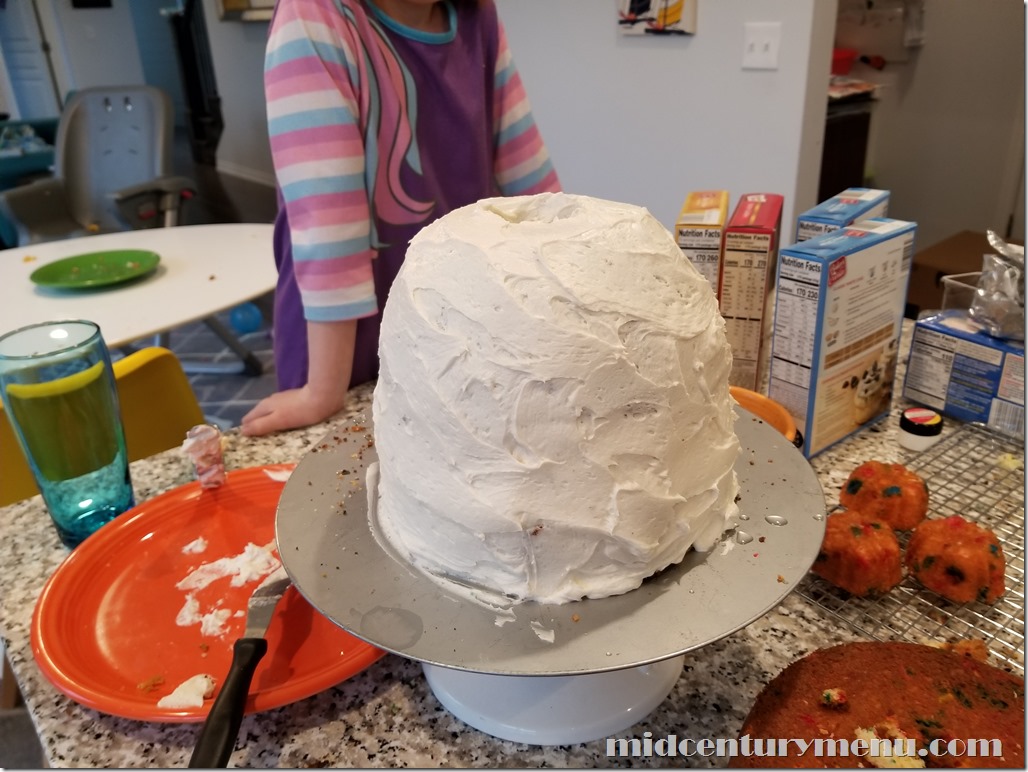 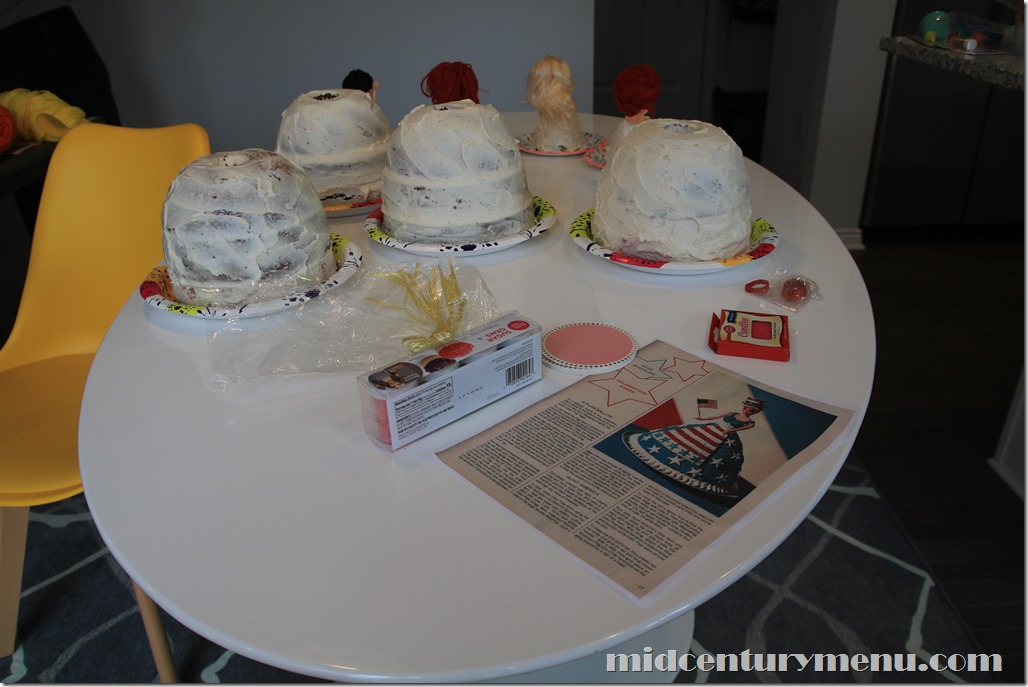 I ended up just crumb coating them and freezing them to store them for Alex’s party. We left for a week to visit my sister in New York, and we were planning on having Alex’s party the day after we came back.

Which, in retrospect, was poor planning on my part. 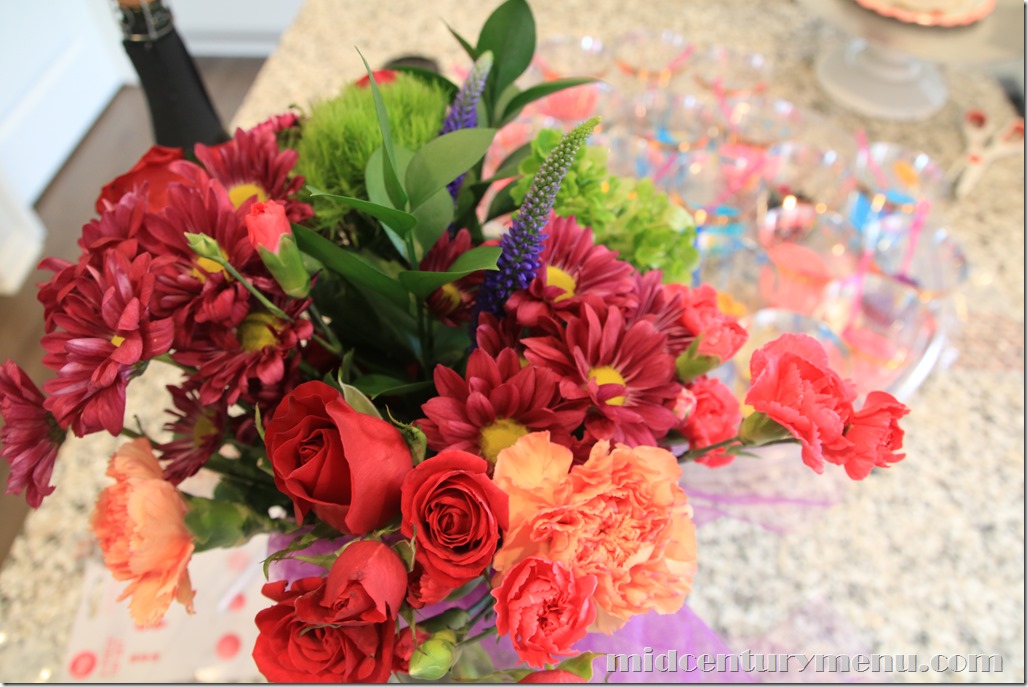 But the day for Alex’s party came, and it was sunny and bright outside. And we had a whole boatload of cake and sprinkles. And I thought that maybe it hadn’t been a mistake after all. 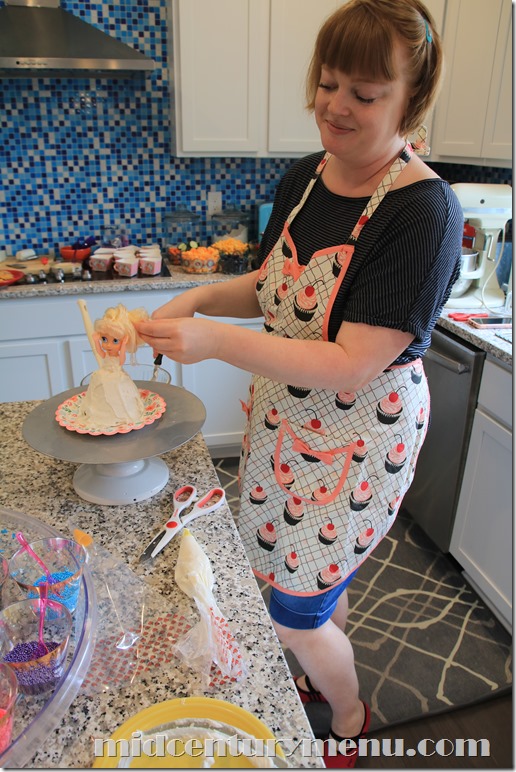 And it was fun putting all the little dolls into the cakes. Not to mention the fact that Alex was bouncing off the walls excited.

When the guests got to our house, we busted out even more frosting and sprinkles and everyone got started. 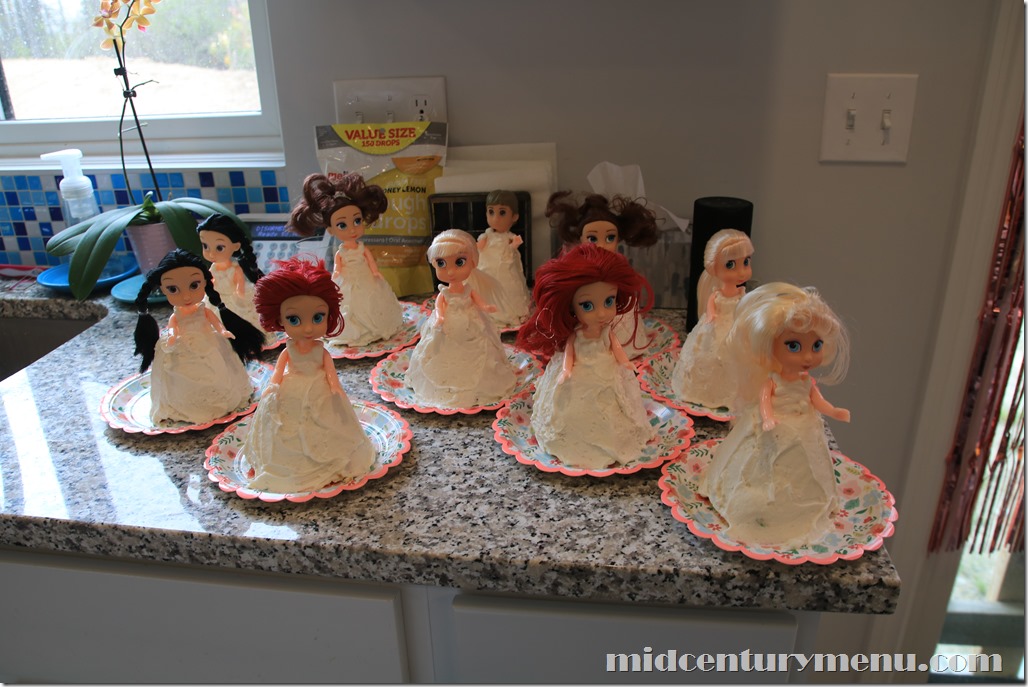 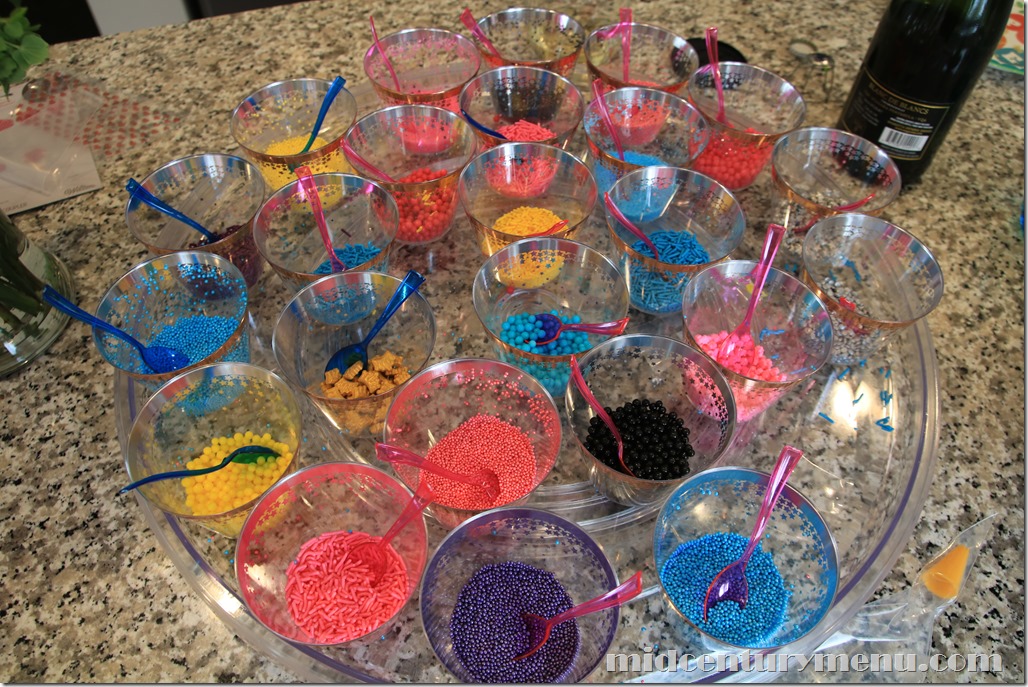 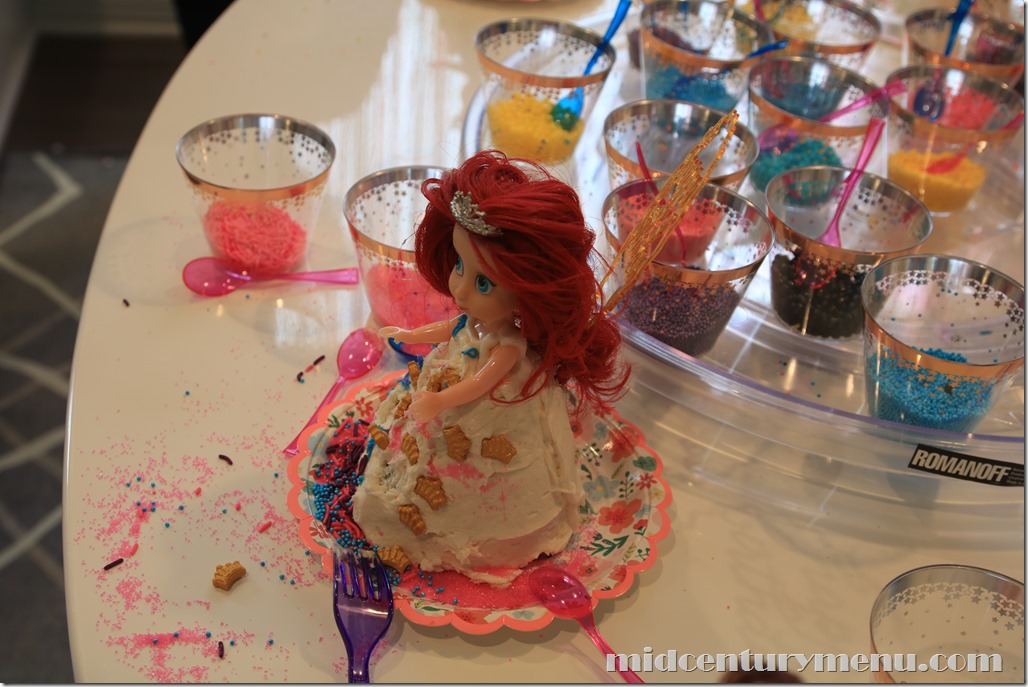 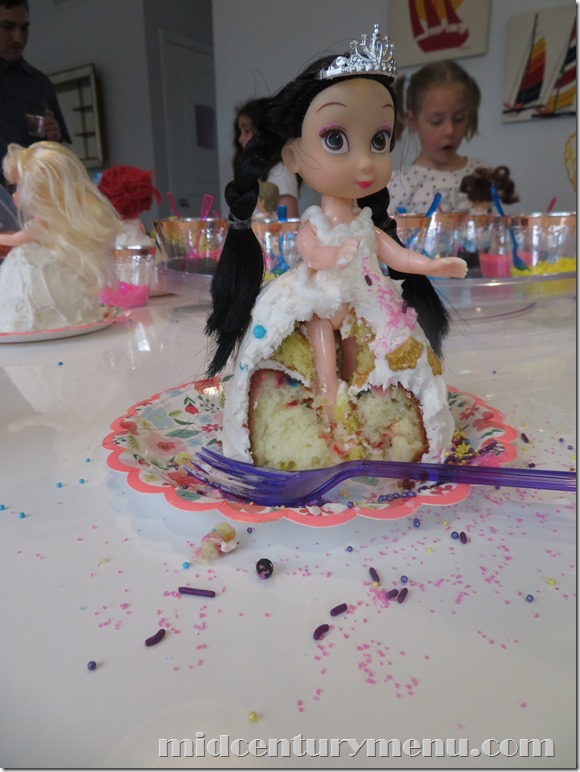 You can see the double cake construction of the mini dolls here.

And in the end, I was so tired from traveling and distracted by little girls that I wasn’t able to decorate Aunt America. So I gave the job to my friend Jill. 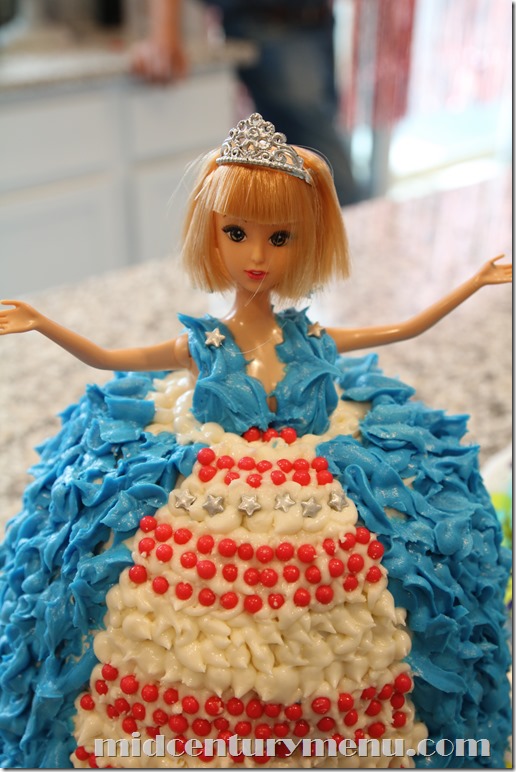 She did a pretty great job, considering that this doll was on a pick and didn’t have any legs, so she just sunk in the middle of the cake instead of standing up like the others. And that it was so humid that my frosting was melting. AND there were herds of screaming kids.

In fact, everyone did a great job decorating under adverse circumstances. 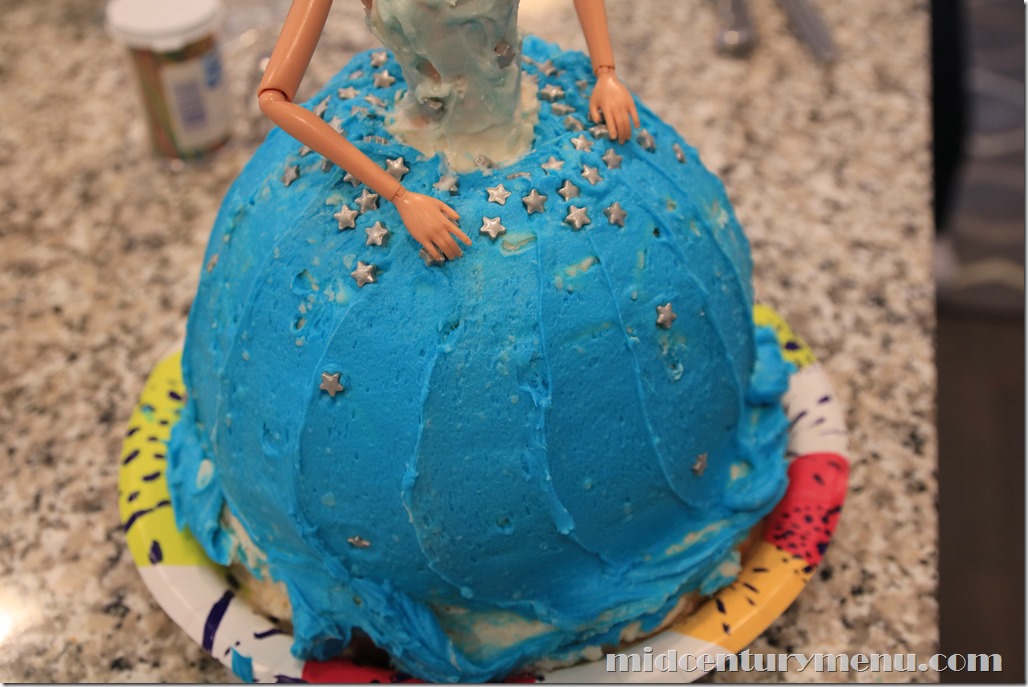 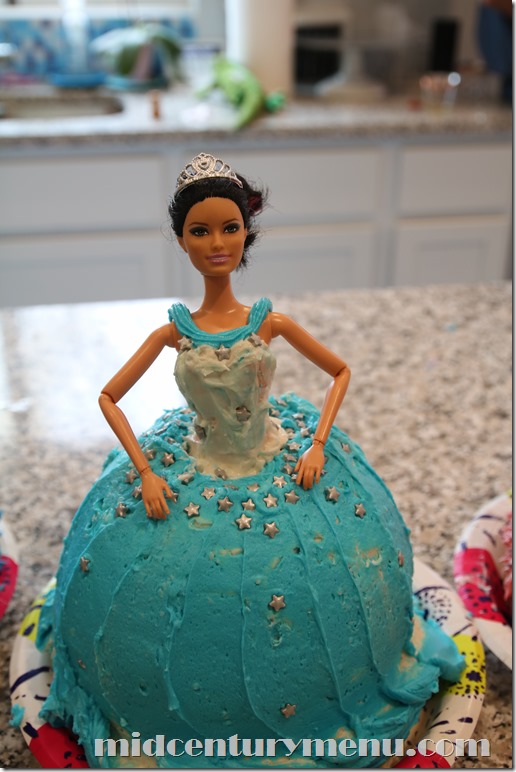 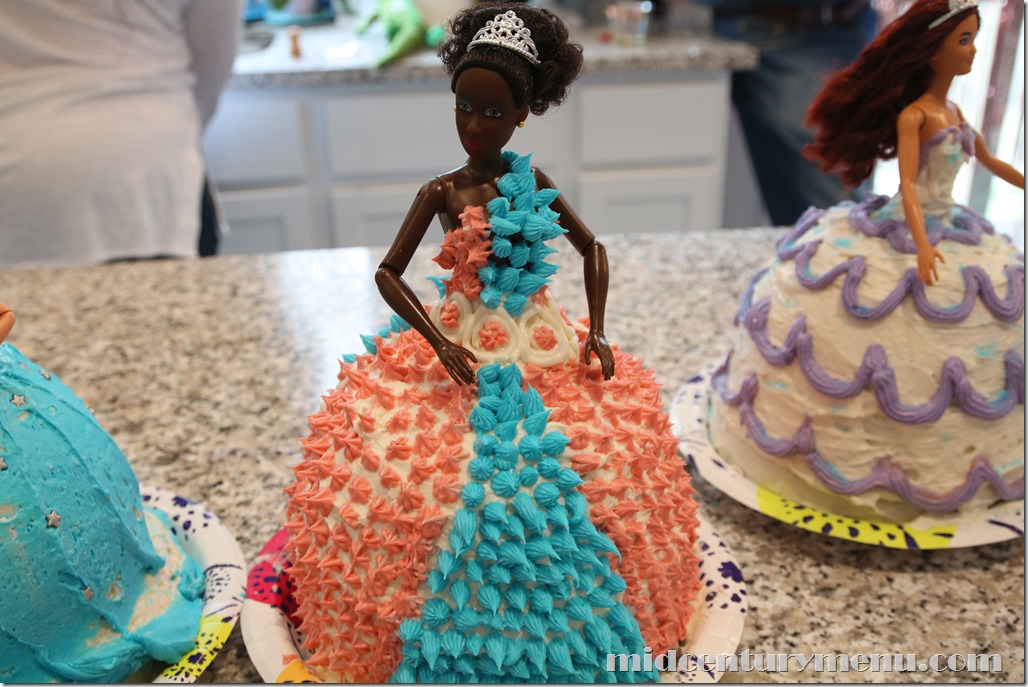 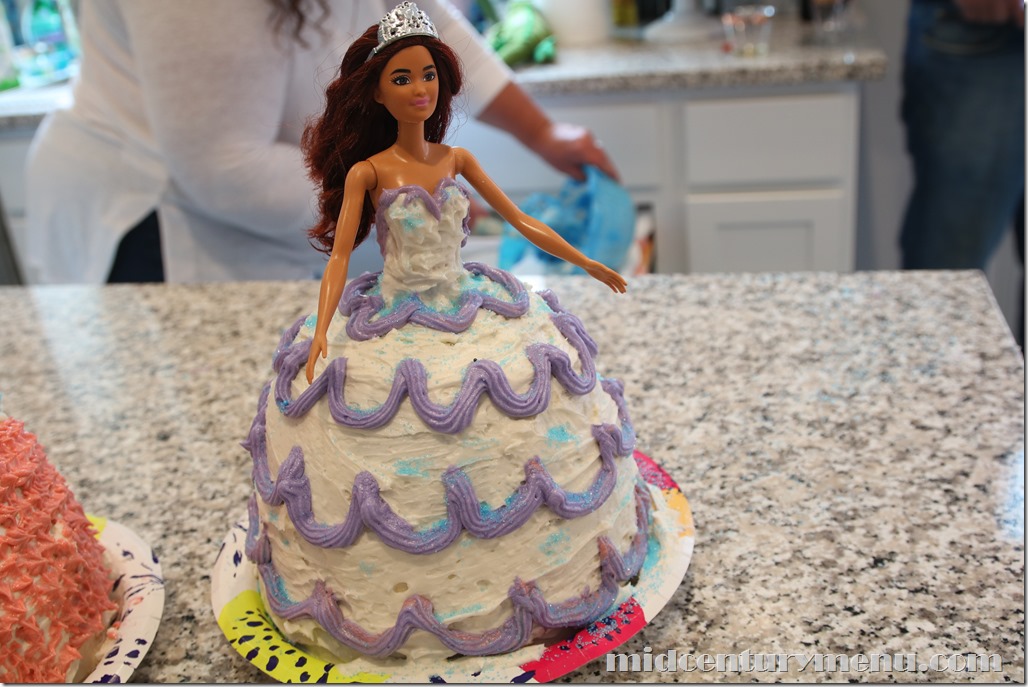 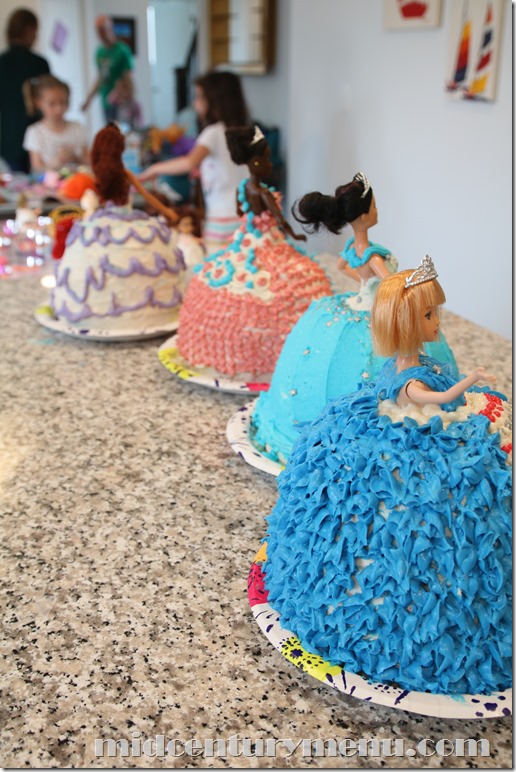 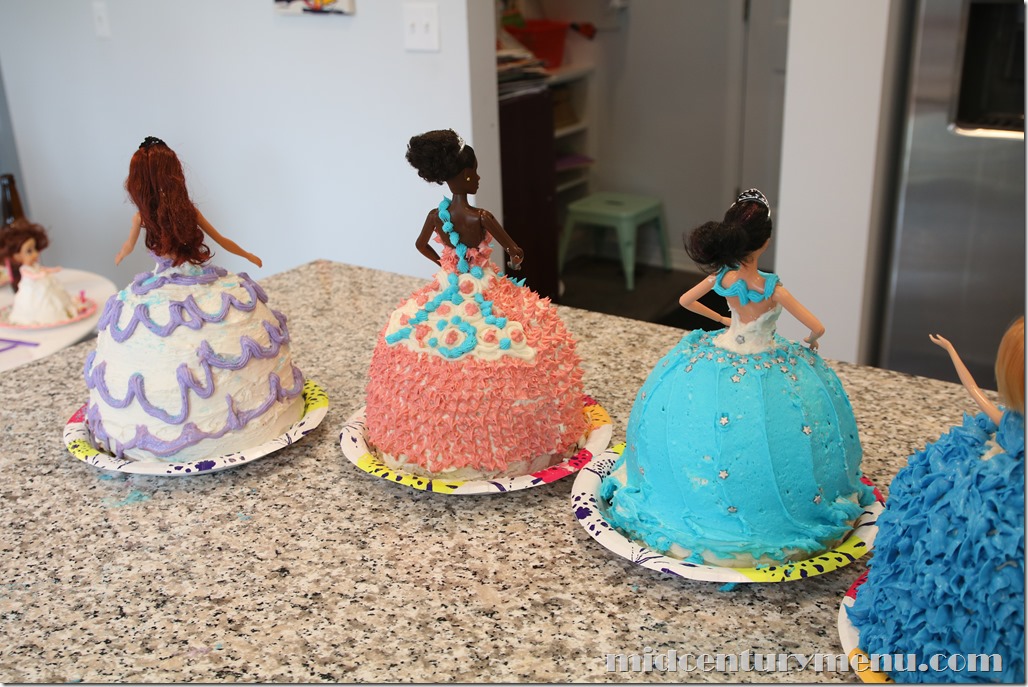 And it got me thinking that these were not that difficult and they were really fun and very retro. And that you could easily make your kid a birthday cake using Ro’s pan. A good-sized cake that would feed lots of little mouths. But these would also be really cool for holidays as well as birthdays. And they would be marvelous for bridal showers! Especially if you did up the cake to look like a vintage Barbie doll. How fun would that be?

Oh, and sorry there is no picture of Tom taking a bite of the cake. I was so frazzled I also forgot to serve the little guests ice cream with their cake. But the party is over and that is the important part.

I mean, the most important part is that everyone had fun.  Especially Alex.