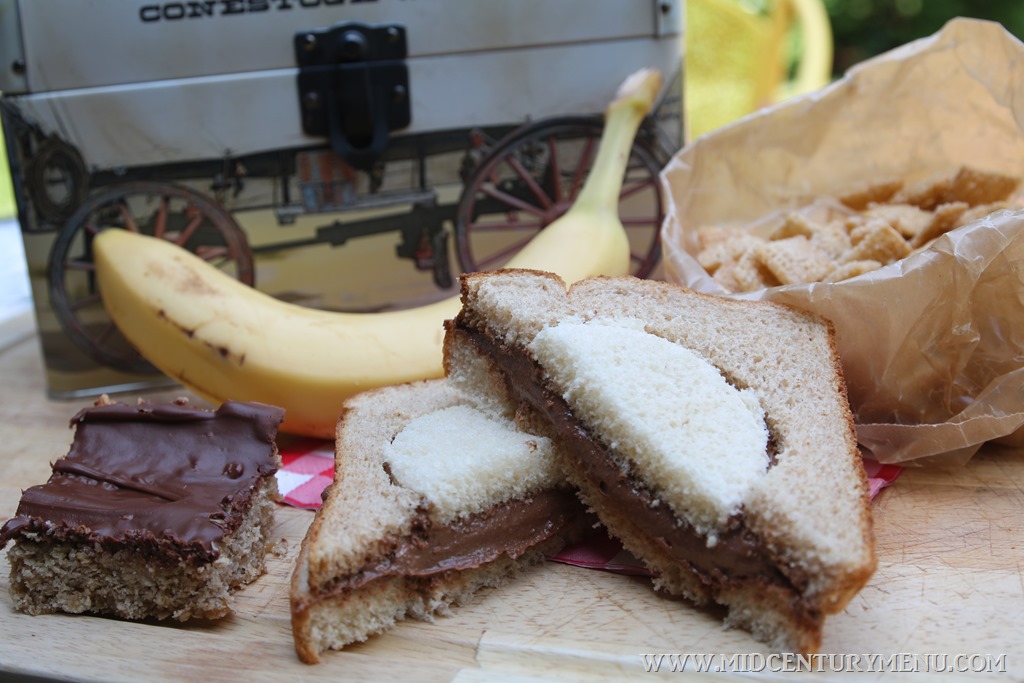 Ever just want to have a chocolate sandwich for lunch?  Well, this week we have you covered. 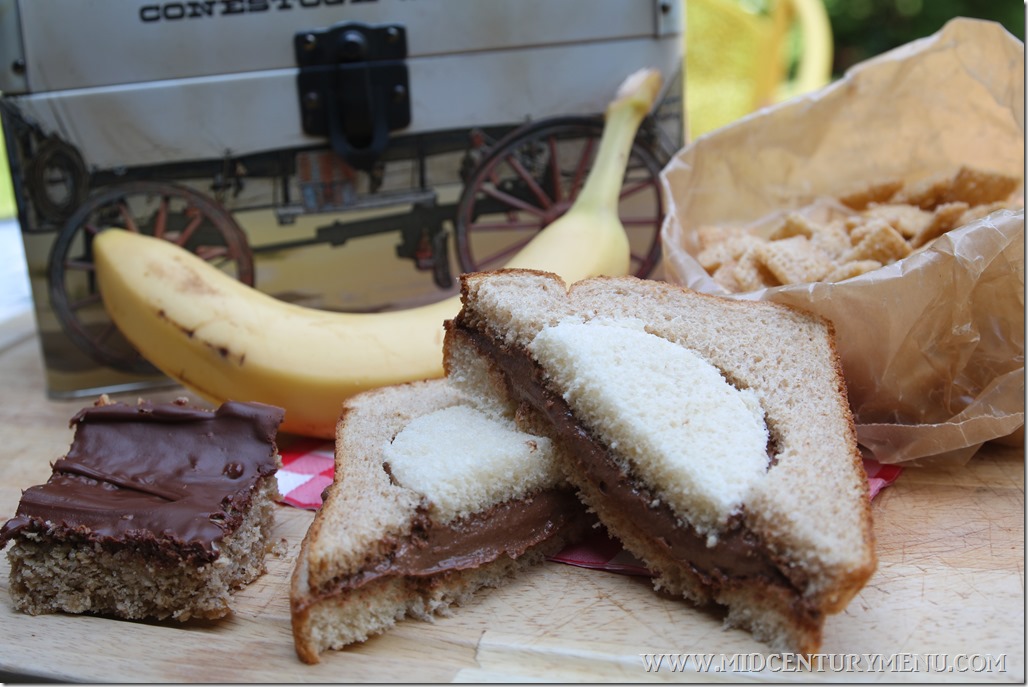 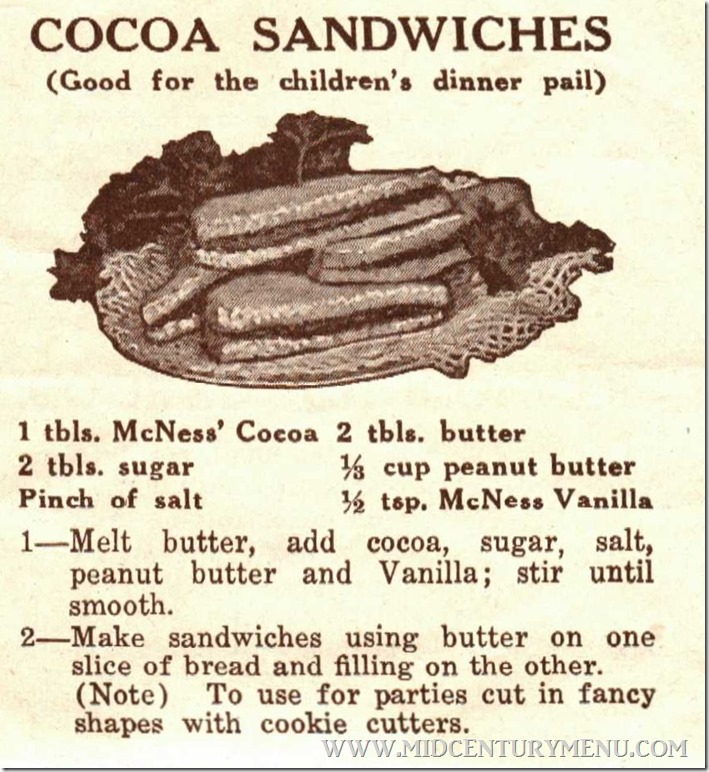 Now, this one isn’t mid-century. This recipe is from a cocoa pamphlet from McNess from about 1925. But seriously, I just could not pass this by. I had to test it. And, if you are a cookbook collector, you must, must look for a McNess cookbook or pamphlet. They always have spectacular graphics and some interesting recipes. Some are a bit hard to reproduce because McNess sold flavorings and spices, and had some custom blends (like Wonder Flavor). Good news is that McNess is still in business, so you can get their spices and flavorings, even Wonder Flavor in their online store.

Anyway, on to the sandwich! 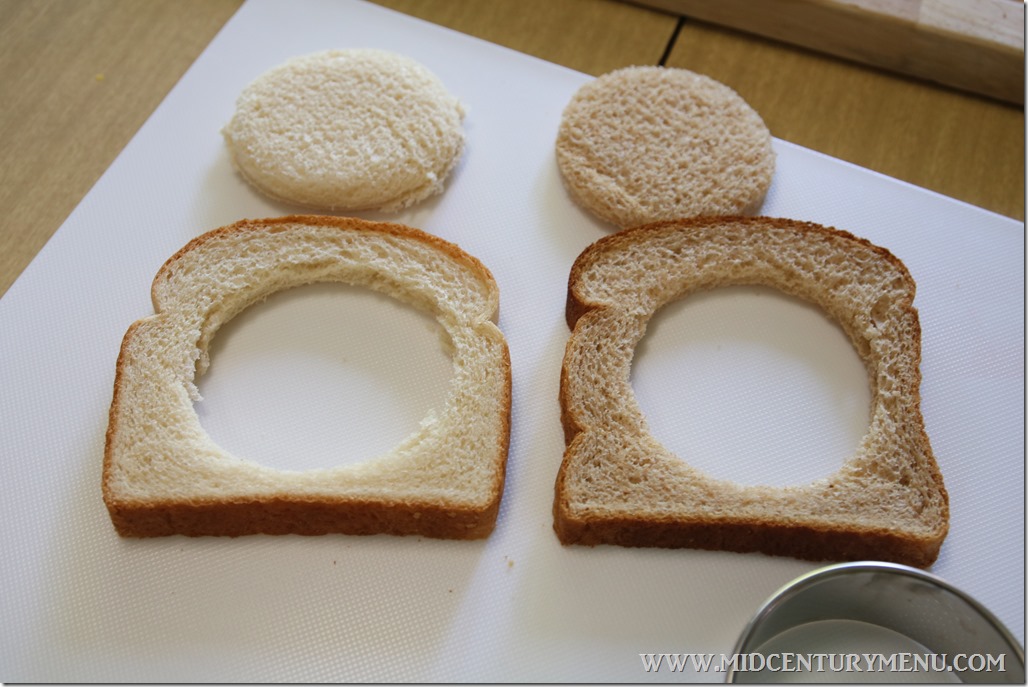 A bonus for this recipe: I saw a sandwich in the Good Housekeeping Book of Breads & Sandwiches that had one slice of white bread and one slice of wheat with shapes cut out of them and then switched. I thought that would be a good, quick way to jazz up a plain sandwich. They used a star cutter, but I thought that would be a bit too futzy so I picked a big, simple circle. 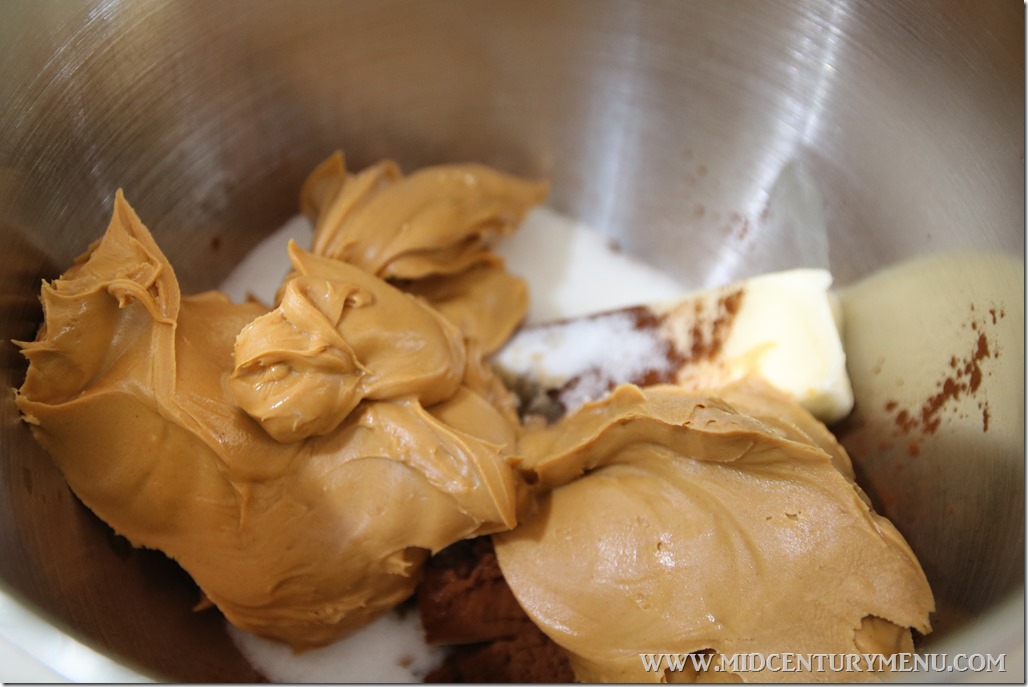 We had friends over, so I scaled this recipe up to make 6 sandwiches. And can you see my mistake? I forgot to melt the butter!!!! 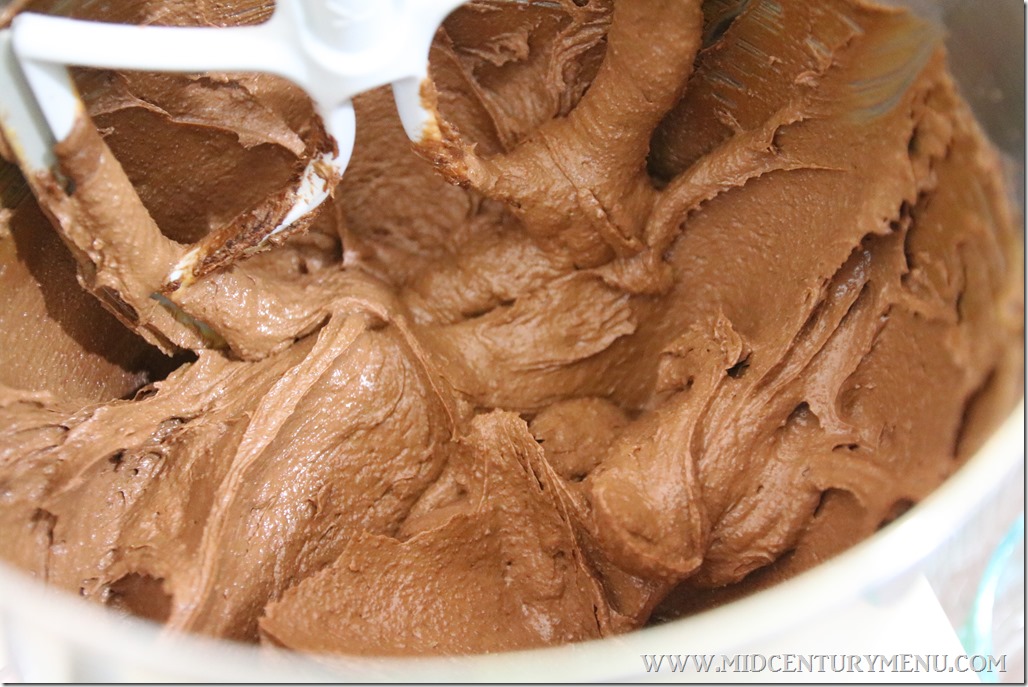 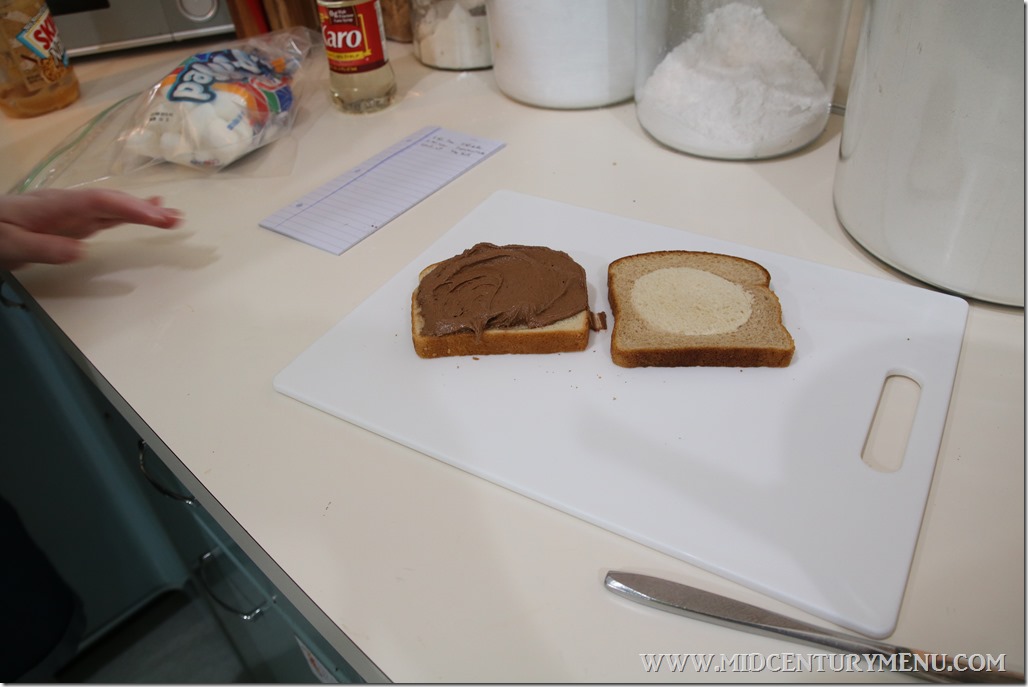 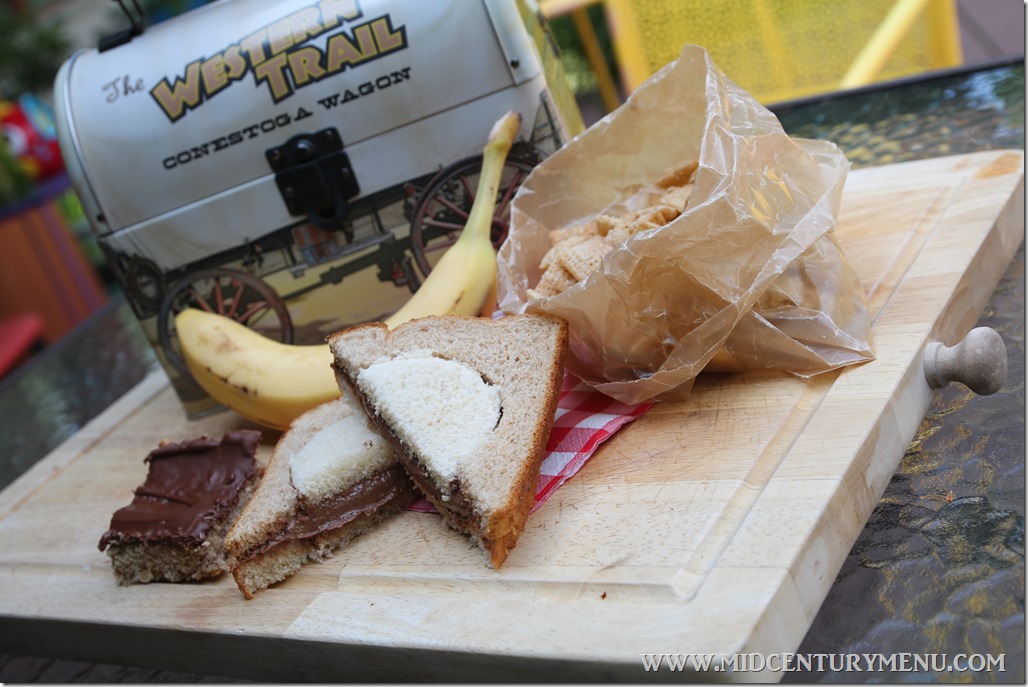 This was by far one of the most adorable things I’ve plated for Mid-Century Menu. And it smelled really, really good. I tried to find an actual dinner pail, like the ones from the Dinner Pail Tree in Oz, but I had to “settle” for a chuck wagon lunch box instead.  (If you are interested in the freaking cute chuck wagon lunchbox you can get them here. {affiliate link}) 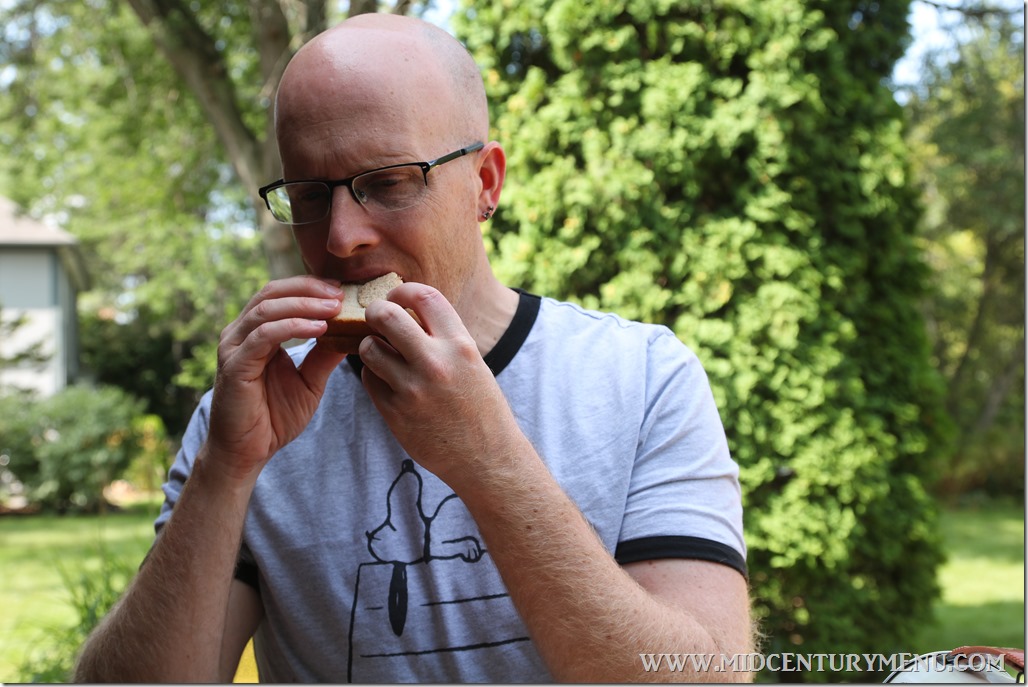 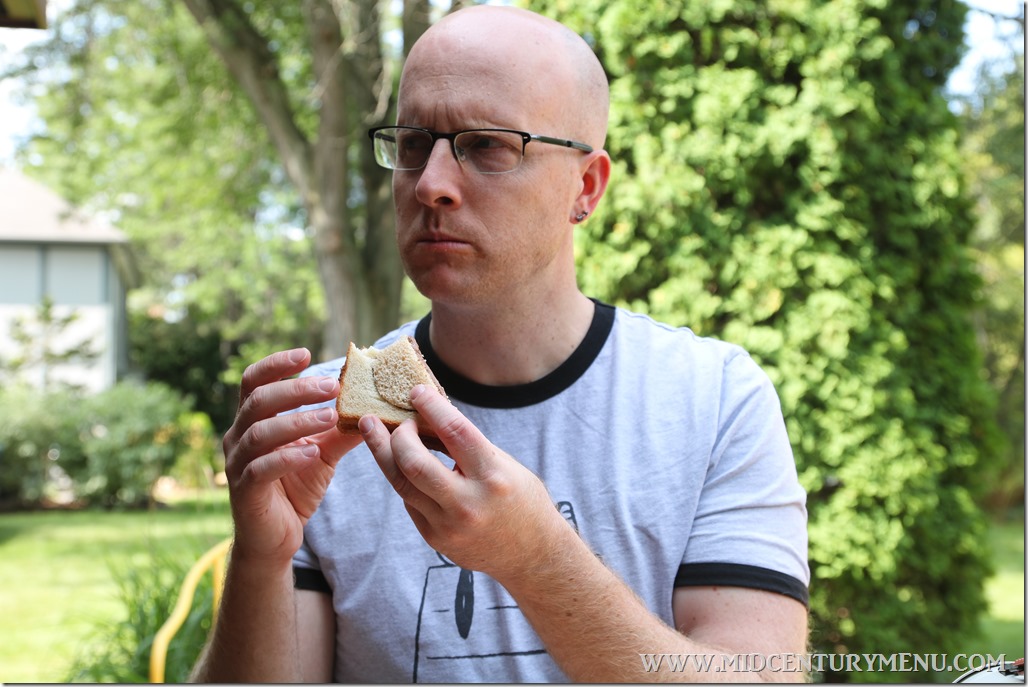 “This is not as sweet as I thought it would be.”

“I thought this was going to be a frosting sandwich. I’m kind of disappointed.”

The Verdict: Surprisingly Not Sweet

This ended up being good, but not nearly as sweet as we thought they would be. Since I screwed up and didn’t melt the butter, or cream this properly, they were also crunchy from the unblended sugar. But they were still delicious. The amount of cocoa really tempers the sweetness and makes it almost on the savory side, with only a slight sweetness and a good chocolate and peanut butter flavor. These are reallly nutty tasting. If you like dark chocolate, then maybe this would be for you. Also, you barely even notice the butter on the other side of the bread, so I wouldn’t bother with that. I don’t know if I would scarf this stuff down as a sandwich again, but Carolyn took the rest home and reported back that eventually the sugar incorporated (it took about a day) AND this stuff was amazing on graham crackers. I could totally see that, since a slightly sweeter bread/cookie would have been a much better pairing. So, if you are looking for a way to make graham crackers or a cinnamon bagel more delicious, have I got a spread for you!