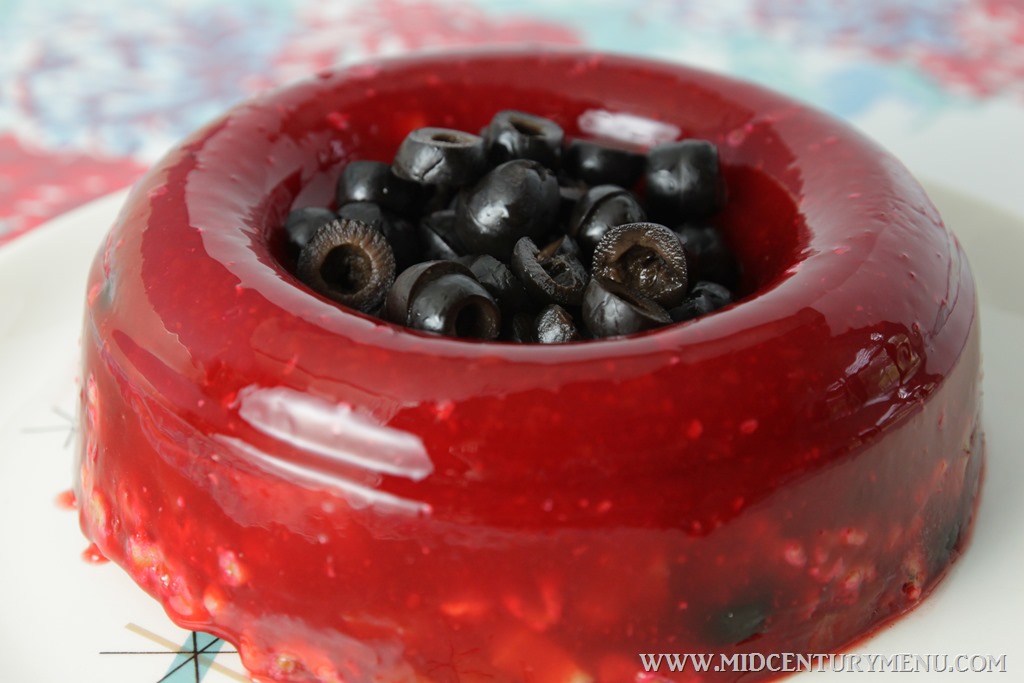 This week I felt like mixing together some ketchup and some cherry gelatin. Just because. 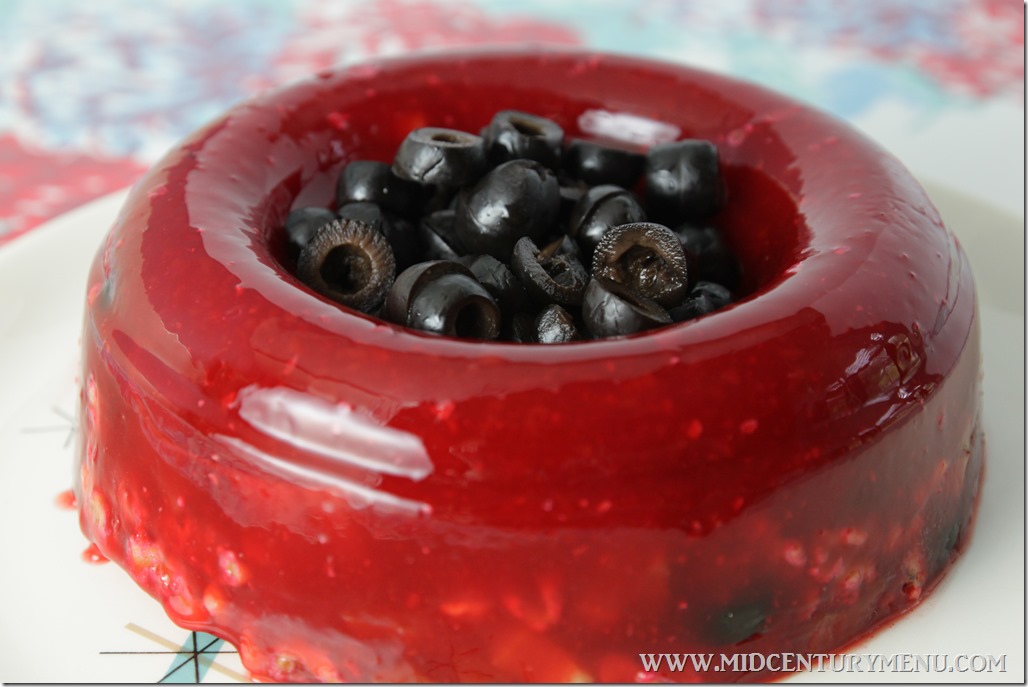 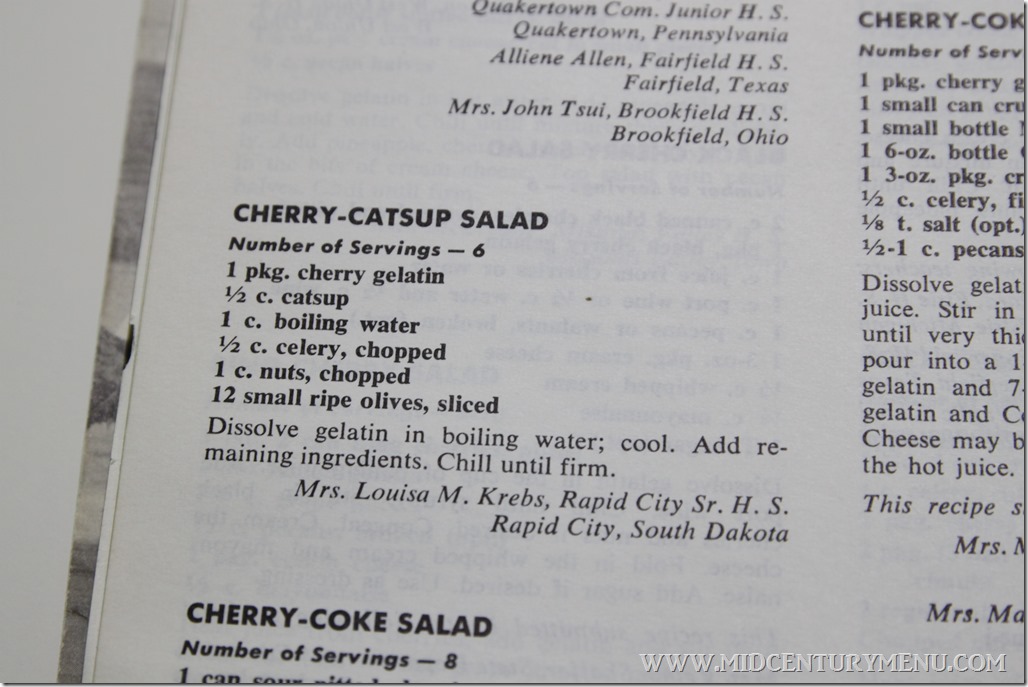 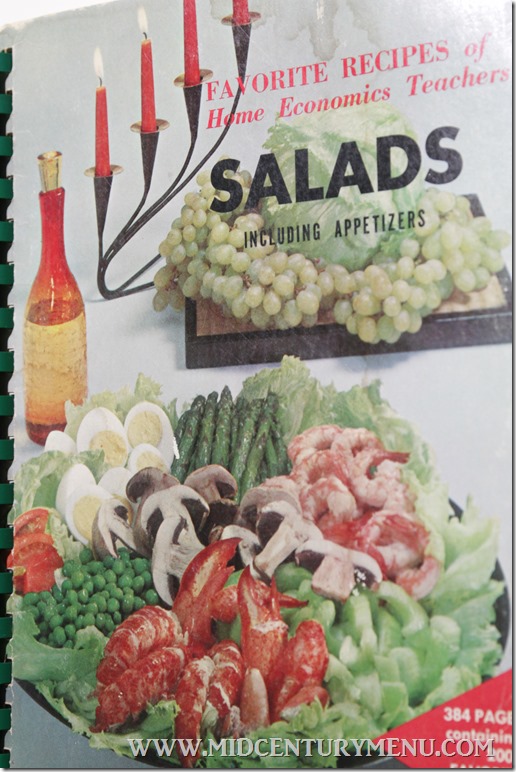 There are a lot of really good recipes, recipe-box recipes and back-of-the-box favorites in these books, but there are also some very unique recipes. And some crazy ones as well. This recipe would fall into the crazy category.  But we’ve mixed ketchup and sweets before, and it actually turned out okay, so I was interested to see how this one would turn out. 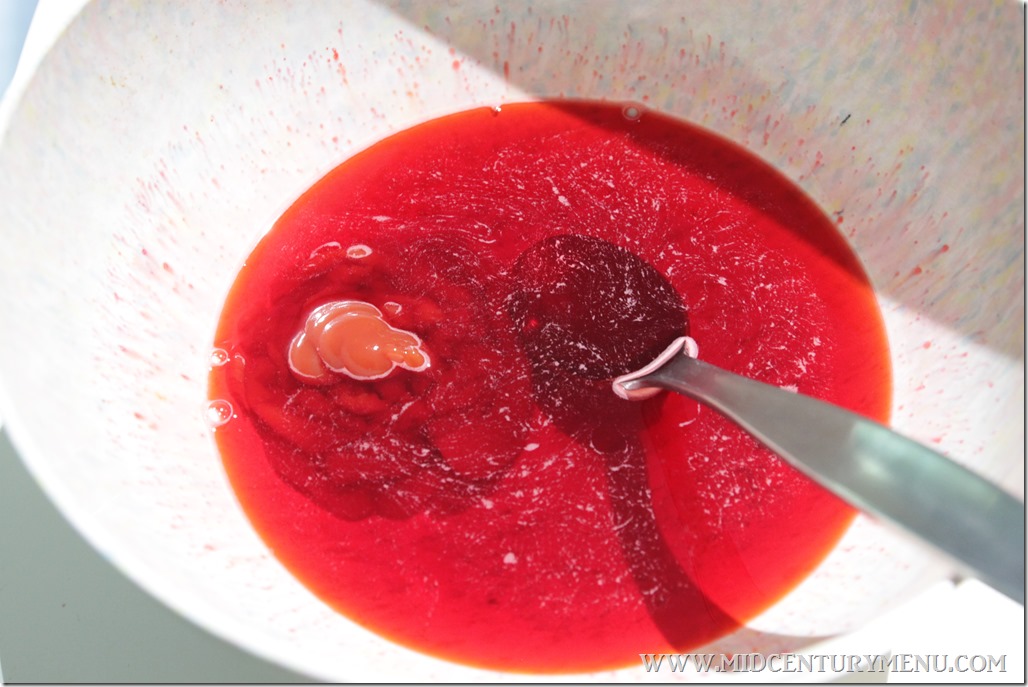 Ketchup and cherry gelatin. For daaaaaaays. 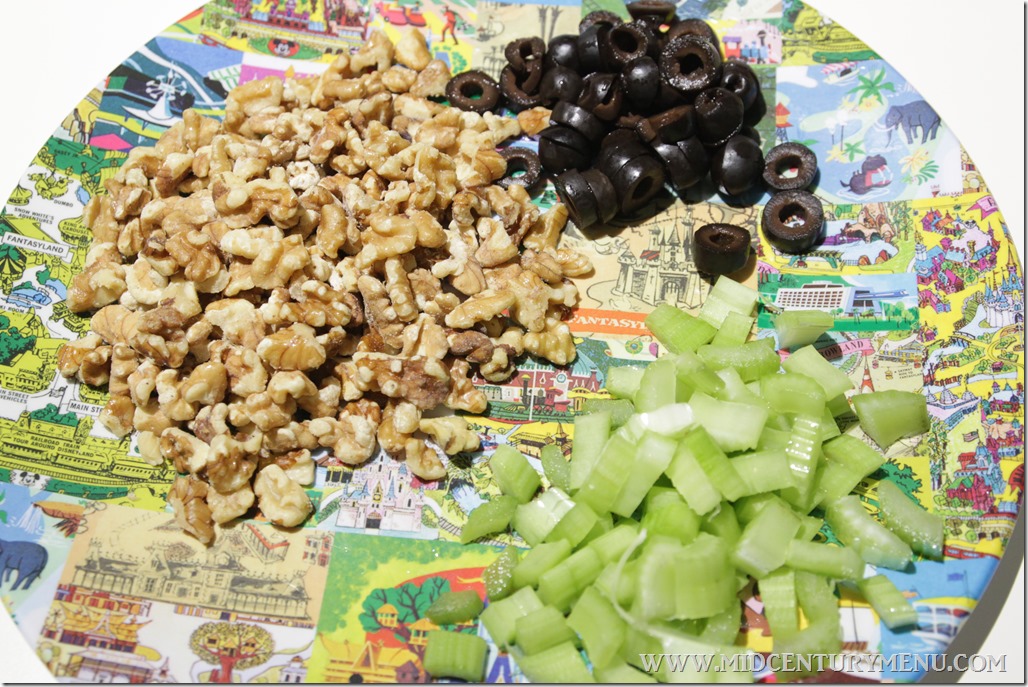 So, the big red flag in this recipe isn’t, as you would suspect, the ketchup. It’s the black olives. If it had been maraschino cherries, I think we would have maybe had a fighting chance with this gelatin. But black olives in a vintage recipe always means something is trying to be savory (even when it’s not savory at all), so when you see them mixed with a sweet ingredient it is pretty much game over. 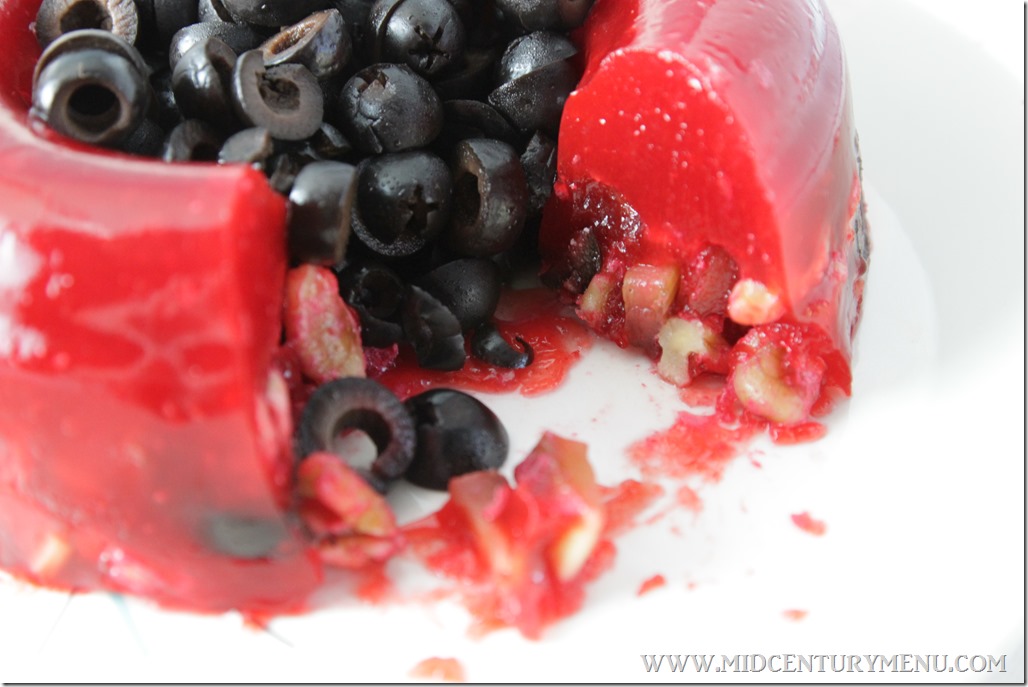 Do you see what I am saying? 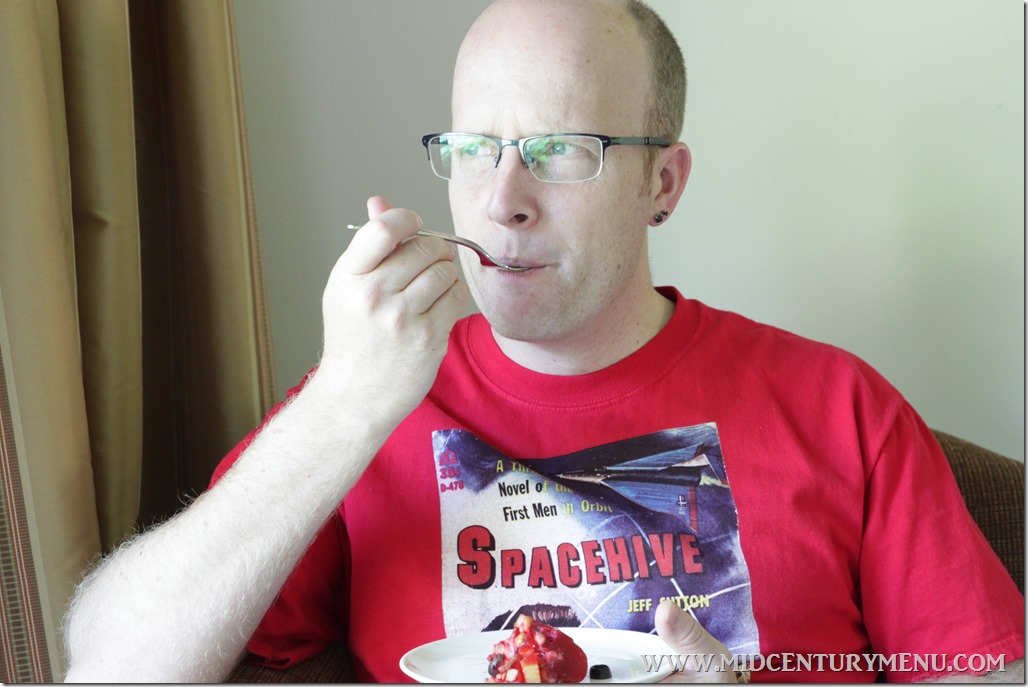 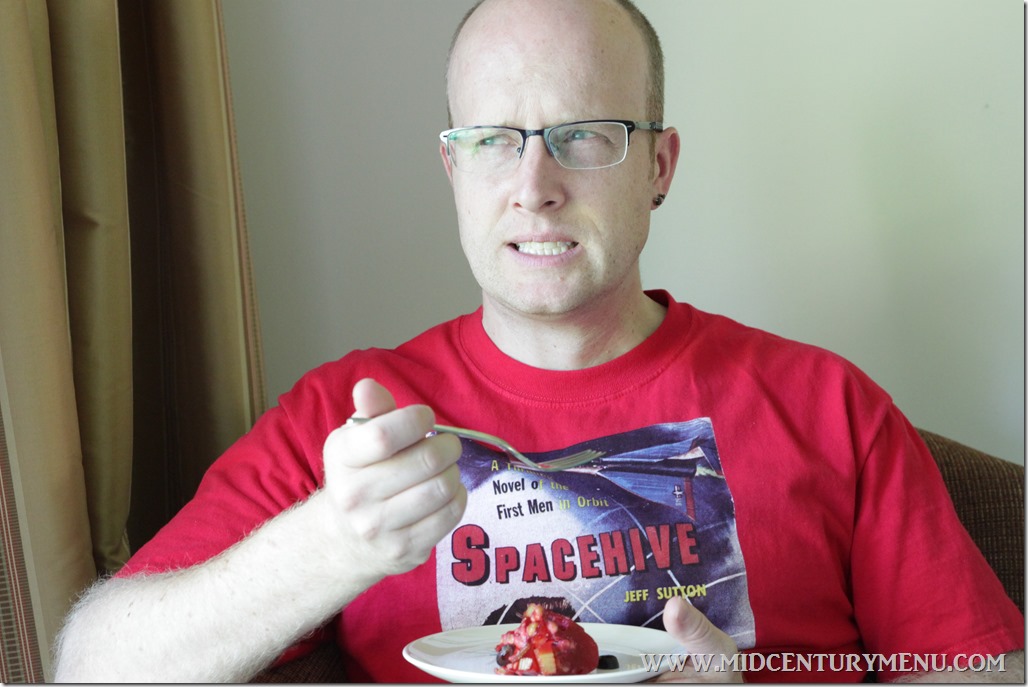 “Unless you like a bunch of random crap thrown together, you are not going to like this at all.”

This didn’t go together at all. At all! If you have ever had a bite of ketchup-covered hot dog in your mouth and washed it down with a gulp of cherry Kool-Aid, then you know what this gelatin tasted like. It tasted like a bad idea. Add a bite of salad to that mouthful, and you have the complete flavor profile: A bunch of random ingredients, thrown together and suspended in gelatin. I can guess that this was supposed to be a type of side to be served with meat, like a sauce or a chutney, but I can’t think of the type of meat that this would compliment. Except for hot dogs, apparently.  In this gelatin’s defense, it had a good, crunchy texture. And it did remind us of summer through the whole hot-dog Kool-Aid thing. But other than that it was a bunch of different flavors all happening at once. And all those flavors told us ketchup and cherry gelatin do not go together well.