The Food of Episode 2: "Protocol" – Behind the Scenes of Astronaut Wives Club with Food Stylist Emily Marshall 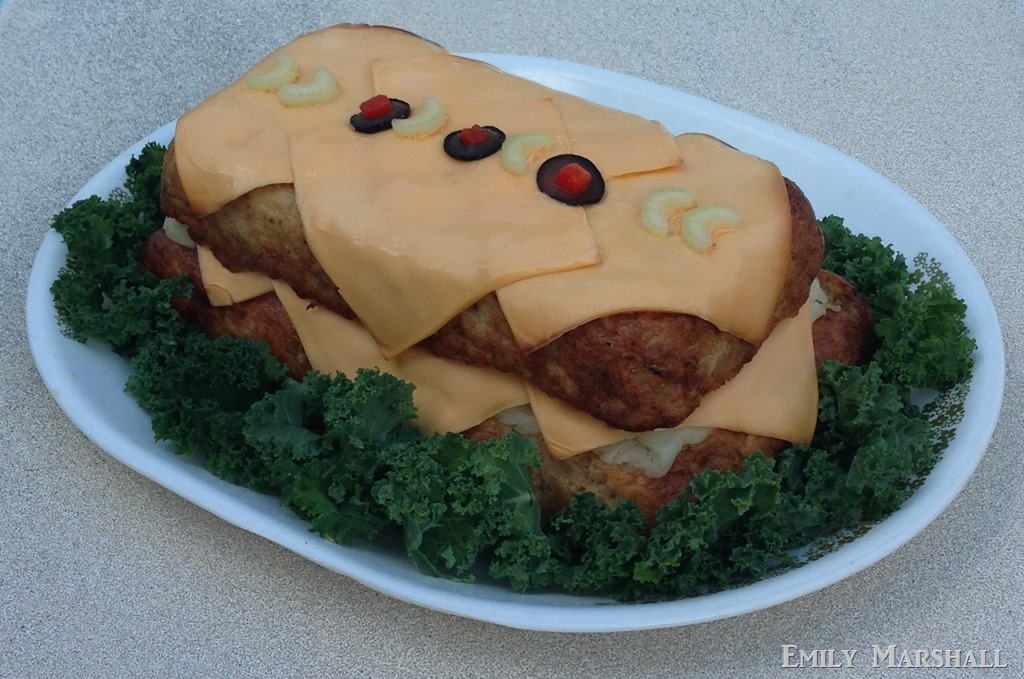 Who is pumped for another night of Astronauts Wives Club tonight? I am pretty excited. And to get you even more excited, here is the food from Episode 2: “Protocol” that was made by food stylist Emily Marshall for the show!

How’s that for excitement? Not enough? Well then, how about a tuna loaf?!? 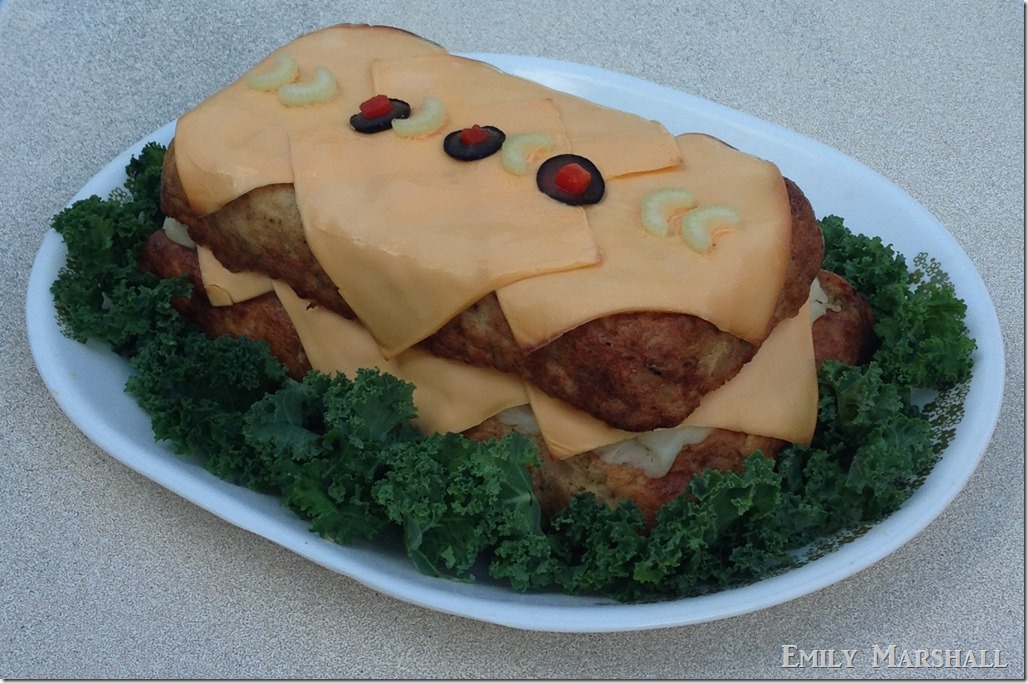 This loaf. It’s pretty much everything. 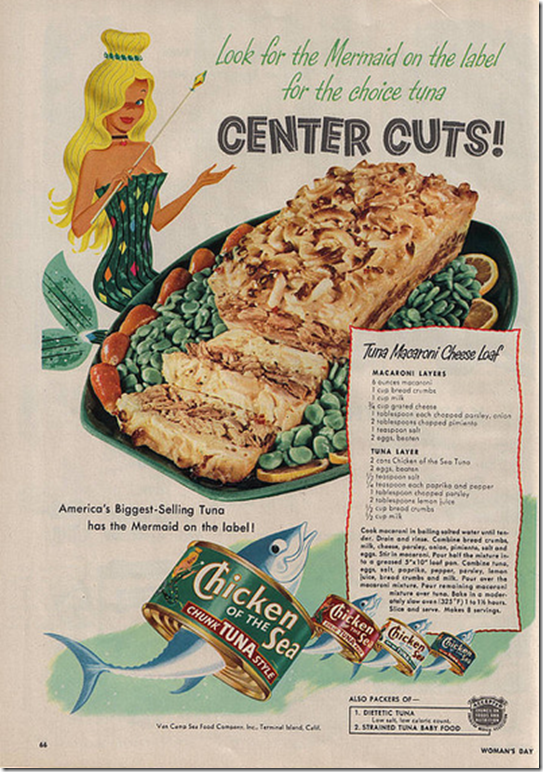 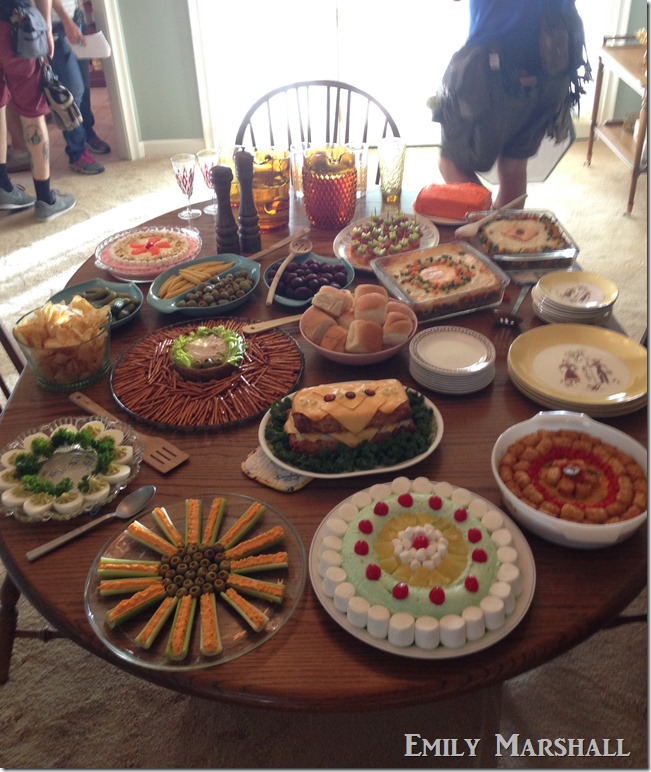 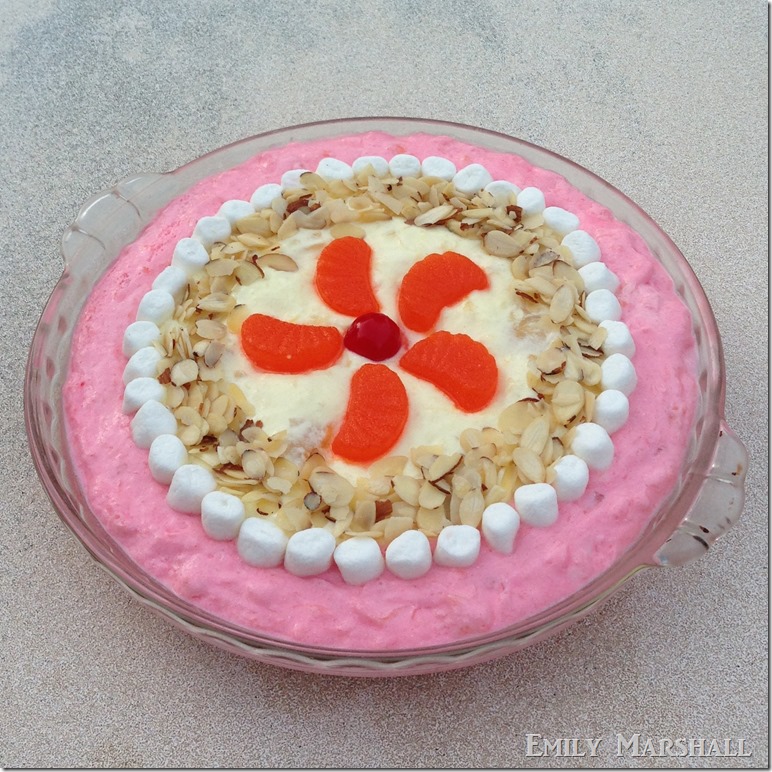 So pretty and pink.

This is based of the recipe for the vintage restaurant Mosca’s Pineapple Fluff.

Heat milk just until small bubbles appear at the edge of the saucepan. Add marshmallows and stir till melted.

While mixture cools, whip cream in a large bowl. Fold marshmallows and cream together. 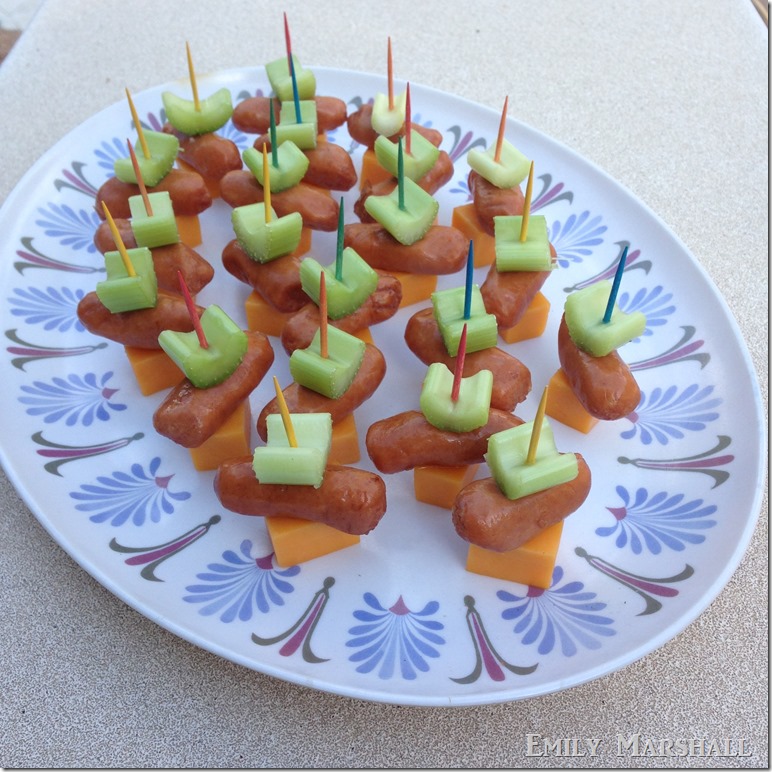 Ah, what party would be complete without cocktail weenies?  Emily’s presentation is fun (LOVE that plate!), but if you want to get really crazy, you can jam them into a grapefruit like we did with these Spam kabobs  in this post! 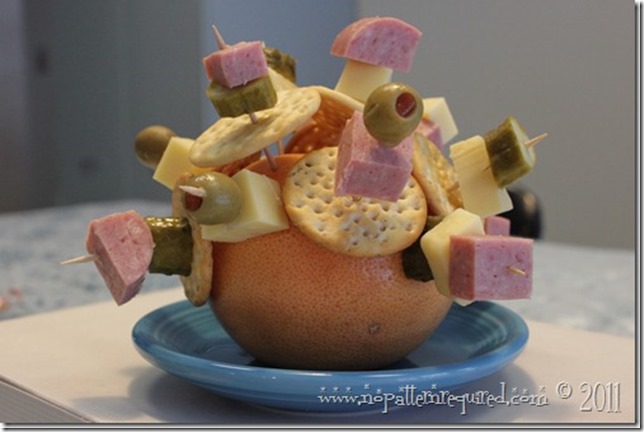 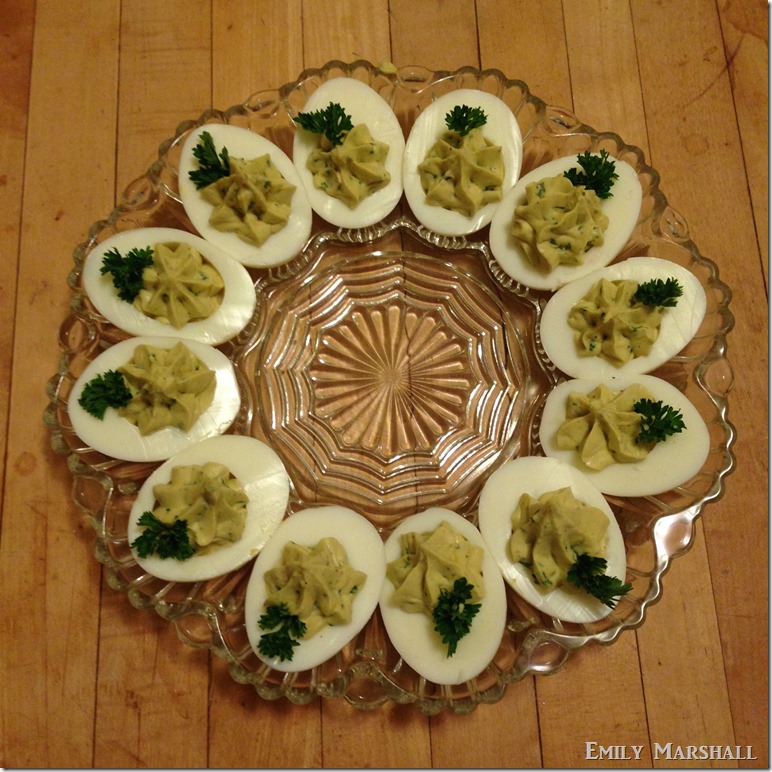 So pretty! And I have to confess, I love using my deviled egg plate! I have a milk glass one with gold around the edge. It’s pretty much the most fun thing around.

Here is a recipe for deviled eggs from Farm Journal’s Country Cookbook, 1959: 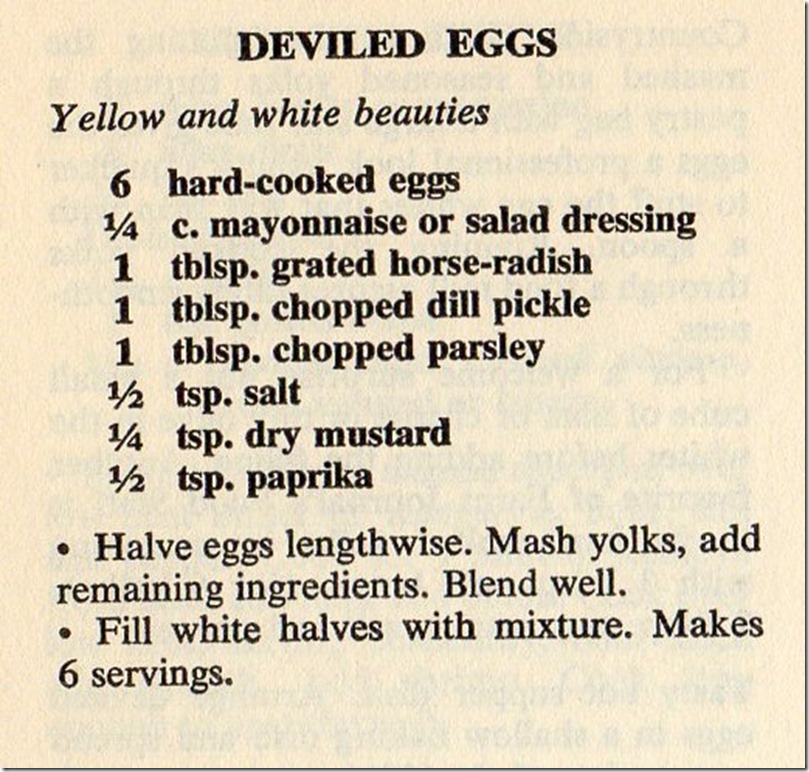 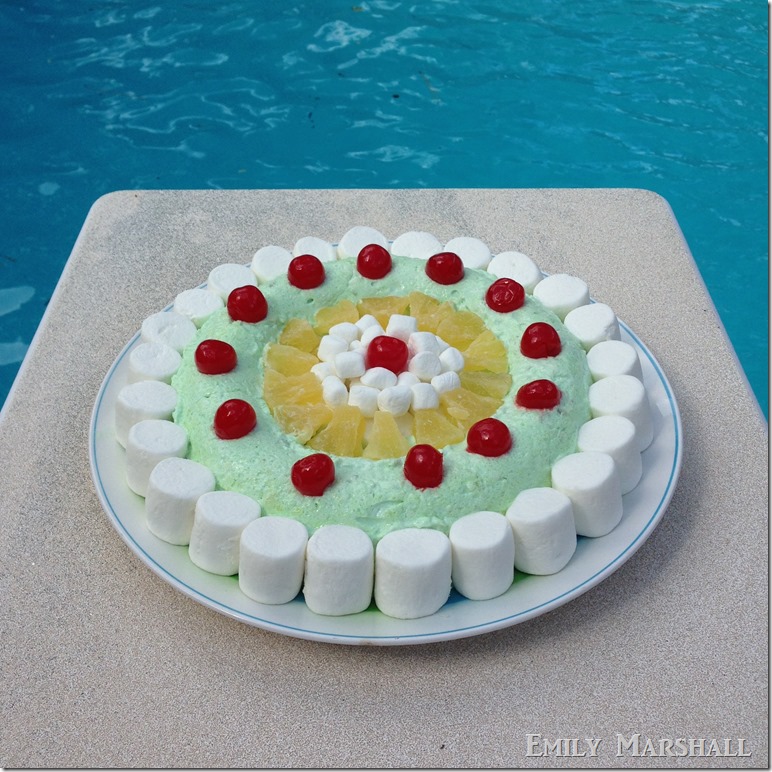 This recipe was actually contributed by the sound utility person (who wired all the actors’ microphones), and it is what he called “The Green Stuff”. It is one of his family’s favorite recipes, and it apparently is delicious!

Though, if you were going to be technically accurate, you should use whip cream or Dream Whip in place of the Cool Whip, which wasn’t introduced into the market until 1966. 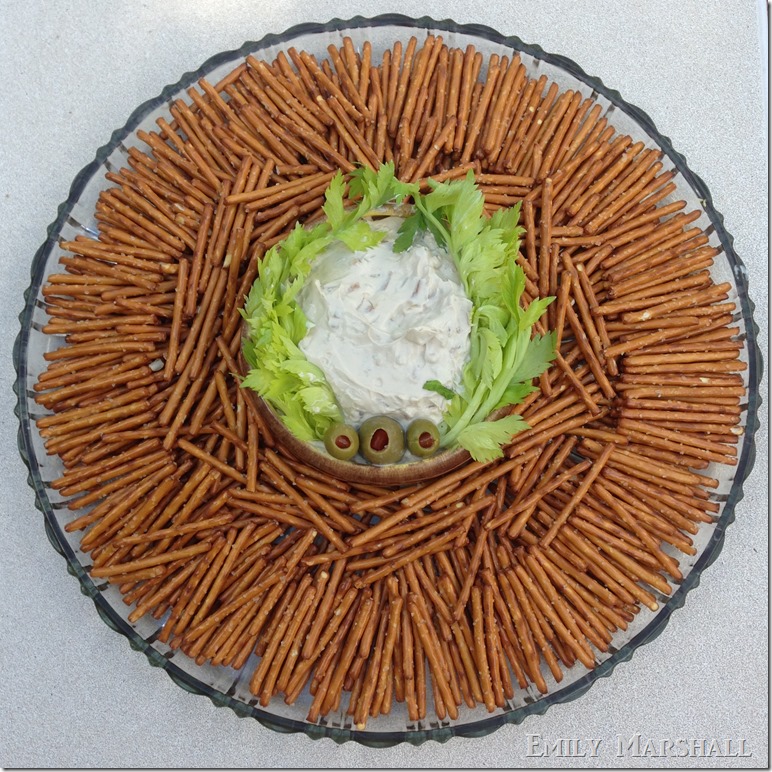 Another onion soup dip, this time with pretzels. And this is accurate for the time as well, this stuff was pretty much at every party! 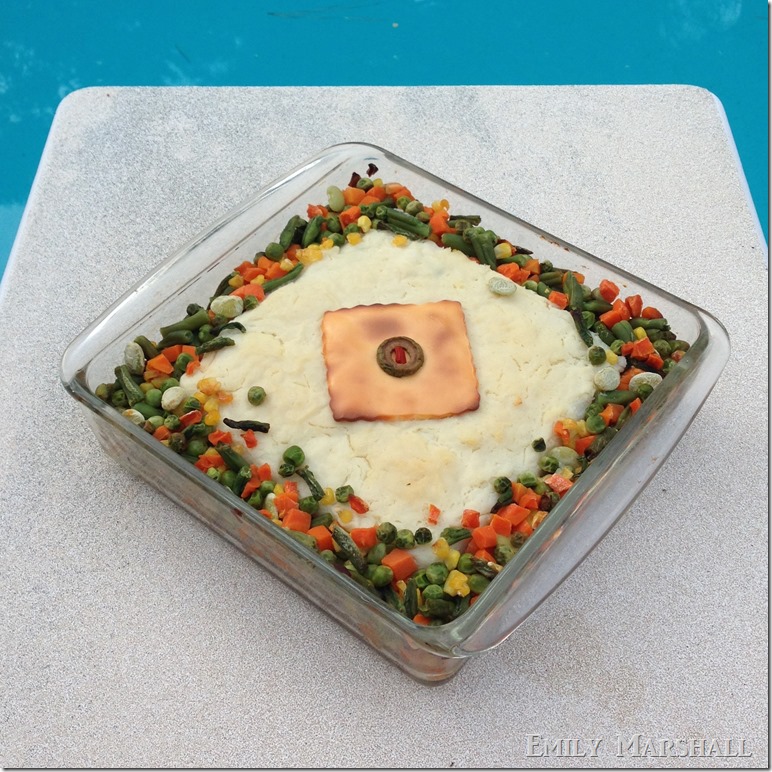 A lovely pie. The slice of cheese in the center adds a great touch!

Here is a recipe from the Campbell’s Cookbook, Easy Ways to Delicious Meals, from 1968: 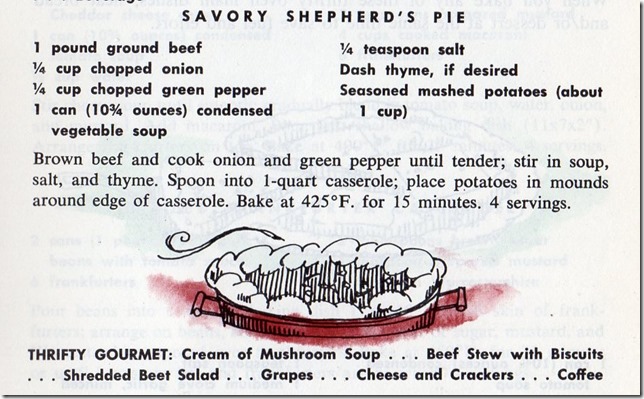 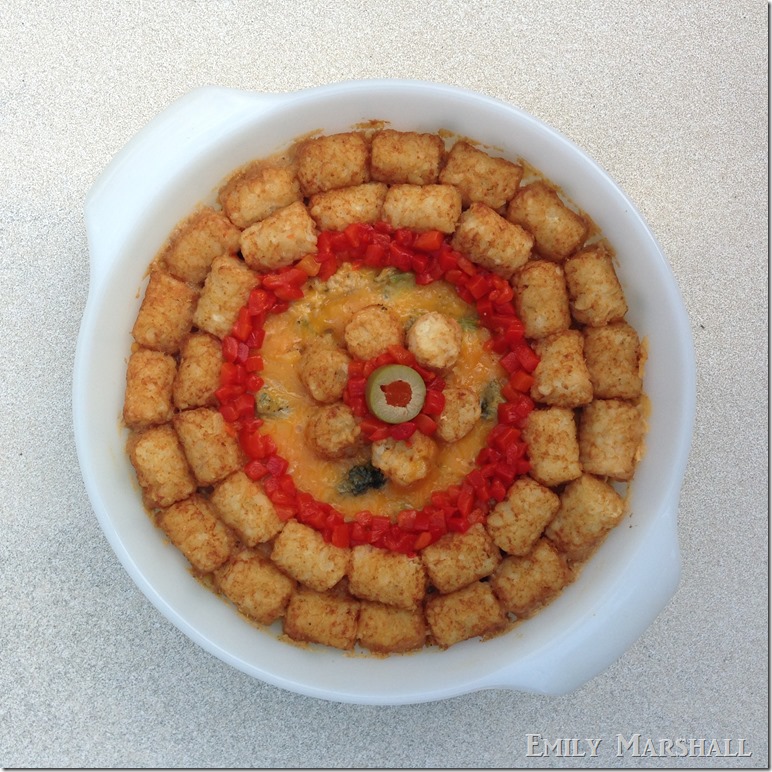 After green been casserole and tuna noodle casserole, this is probably the most well-known casserole to come out of this time period. And did you know that tater tots were created in the 1950’s as a way to use up leftover potato scraps at Ore-ida? Well, if you didn’t know that, you probably could have guessed it.

In any case, this classic casserole usually contains ground beef, veggies, a can of cream of mushroom soup, cheese and tater tots. But I have to confess that this is a hotly debated casserole in my house. I grew up with a version that had the soup, veggies and hamburger all mixed together at the bottom, and Tom grew up with the vegetables, hamburger and soup all in separate layers at the bottom. It’s been a struggle, but we’ve finally compromised: A layer of ground beef at the bottom, topped with vegetables mixed with cream of mushroom soup, then all of that topped with tater tots and cheese. Marriage is all about compromise.

In any case, I was interested in seeing how this casserole evolved, so I did a bit of digging in my recipe stash, and came up with a lot of casseroles similar to this. It turns out that variations of this casserole have been around for a long time, and before tater tots, raw or cooked potatoes were used. And before cream of mushroom soup, tomato soup was used. Here is the most fun almost-tater tot casserole I saw, which is called T.V. Hot Dish. I have to confess, I mostly like it because of the name.  It is from a North Dakota community cookbook from 1963: 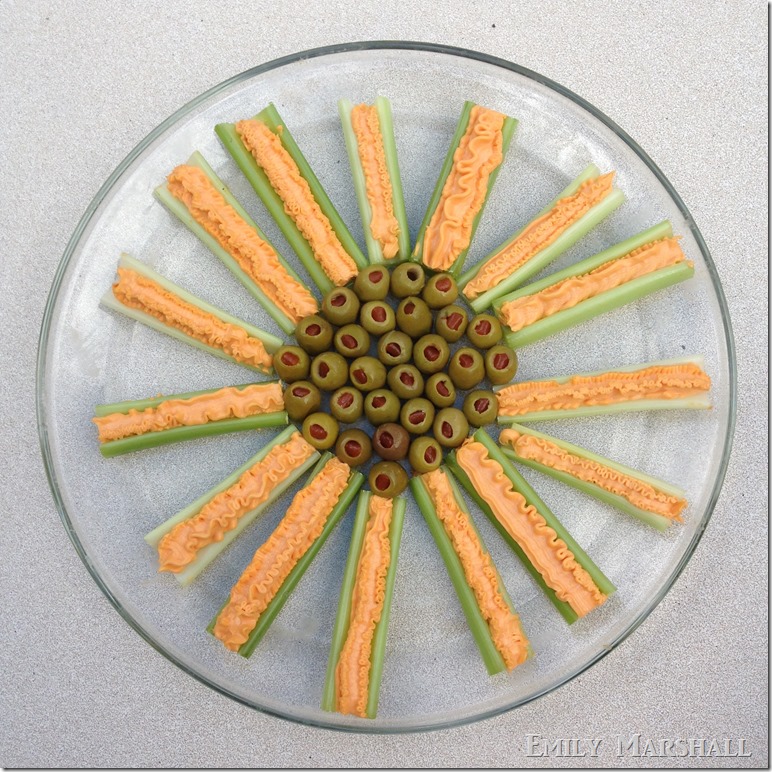 What mid-century potluck would be complete without celery stuffed with something? In this case, canned spray cheese was used by Emily, though at this time the Cheese Whiz would most likely have been piped in by hand or spread in with a knife.

A big thanks to Emily Marshall, who was so generous in sharing all her awesomely styled food pictures! And if you like this and want to see more, make sure to tune in  today (Thursday) at 8 pm on ABC to watch more of Emily’s food in Astronaut Wives Club, and come back next week Thursday when we showcase food from Episode 3!