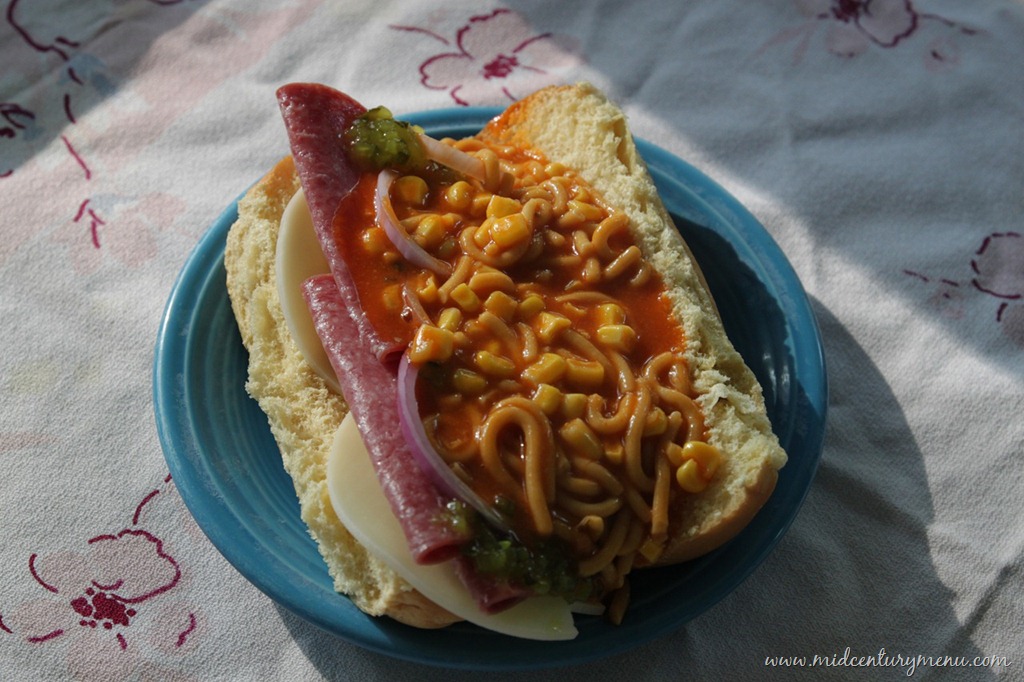 Okay, okay. You got me. This post is NOT about gelatin.  I have to admit that the gelatin contest has been kicking my butt recently. My fridge is full of gelatin, my cabinets are full of boxes of the stuff and I STILL have a bunch of recipes to test.

But fear not. Tom and I still have the will of the warrior and the eye of the tiger. And the stomach of…something with an iron stomach. We will get through this.

And, to keep you amused while we cook and taste, here is the insanity that is Spaghetti Subs! 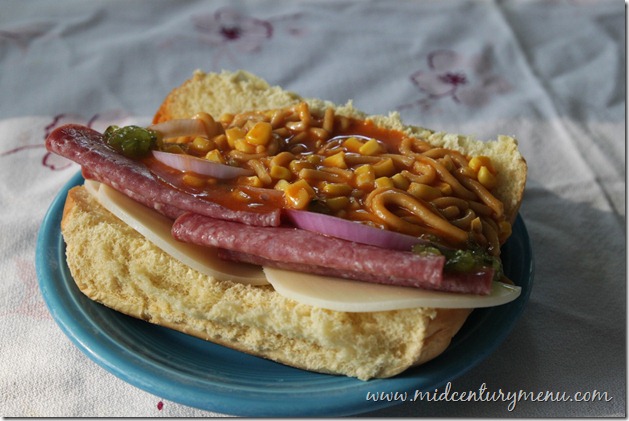 Just in case you were wondering if you were seeing things, never fear. There is canned spaghetti mixed with corn on that sandwich. You aren’t insane.

It’s okay to laugh. Really. Just let it all out. We have seen some crazy crap on this blog, but this has to be one of the weirdest.

When we get something like this, you really, really start to wonder about mid-century test kitchens. I mean, really. 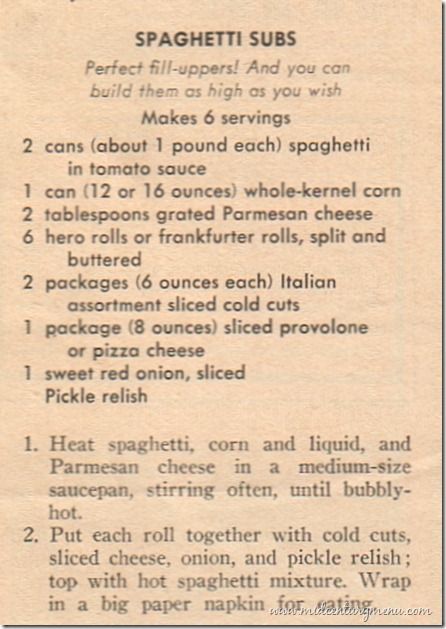 See, you thought I was insane one, and just making things up to get you to visit my blog, but here is the proof that not only am I sane, but at one time this was printed in a cookbook. Who’s the crazy one, now?

Wait, it still might be me. After all, I actually made this nonsense.

This little wonder comes from the ever-amazing reader, Veg-o-matic. This recipe was on the same page in a cookbook as Veg’s gelatin submission. And as crazy as that gelatin submission was, these subs were even more nuts. “Oh, and those Spaghetti subs really need to happen,” Veg wrote in the submission email,  “At your house. Not mine.” 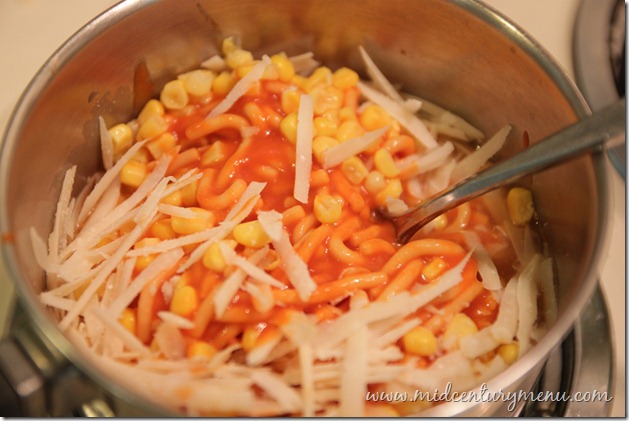 This is a pot full of crazy right here. Canned spaghetti, parmesan cheese, canned corn AND the liquid from the canned corn.

As if canned spaghetti wasn’t goopy enough on it’s own. 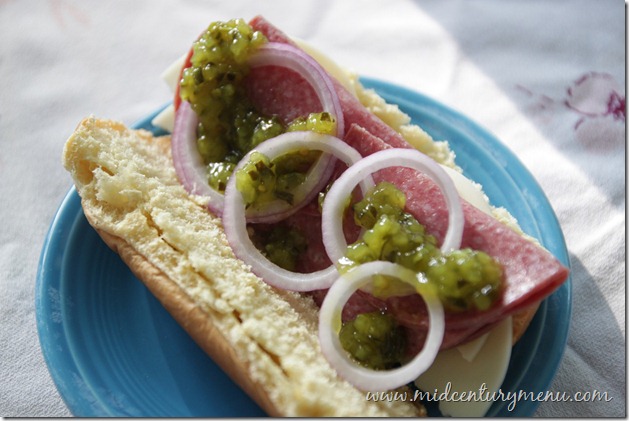 This is a hot dog bun filled with provolone, salami, relish and red onion. 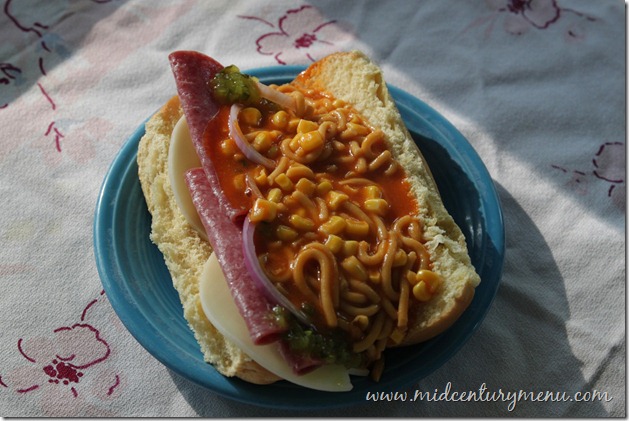 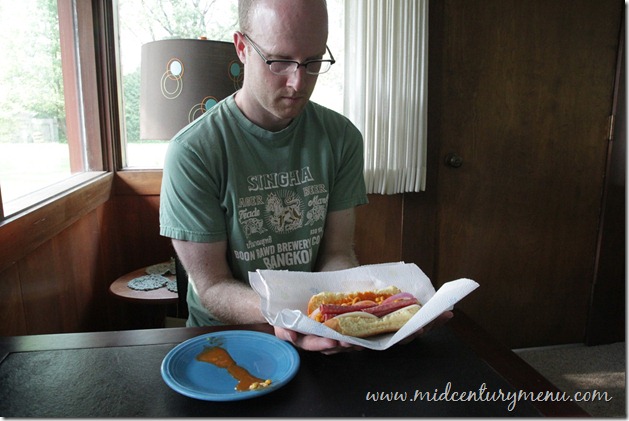 This is Tom thinking about how bad his life is. 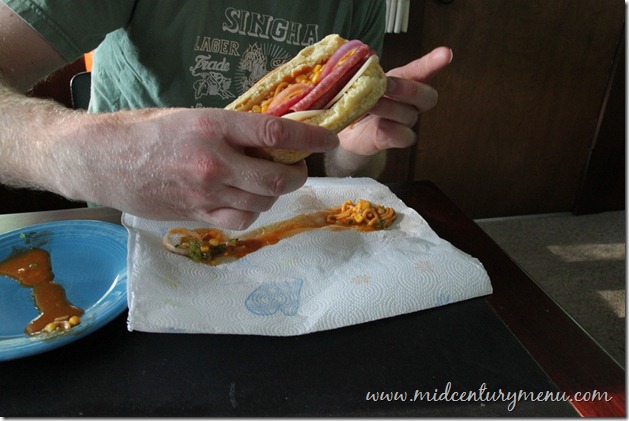 THIS is how messy that stupid thing was. 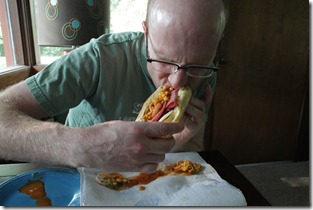 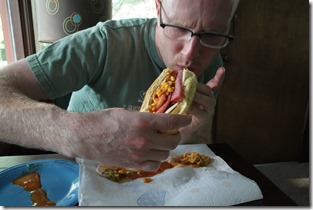 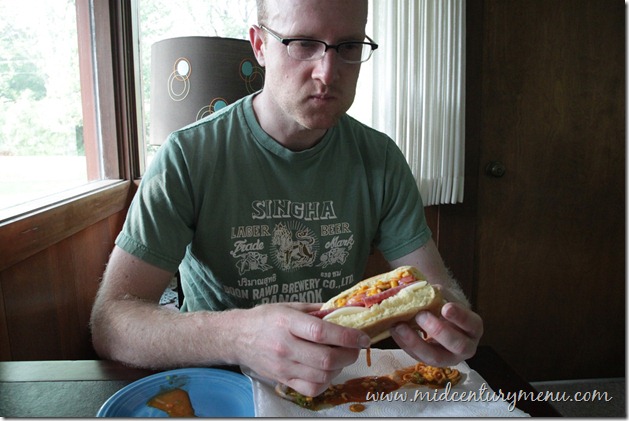 This is Tom trying to crank down on a sandwich that should, by all rights, be eaten with a spoon. Or at least a knife and fork. 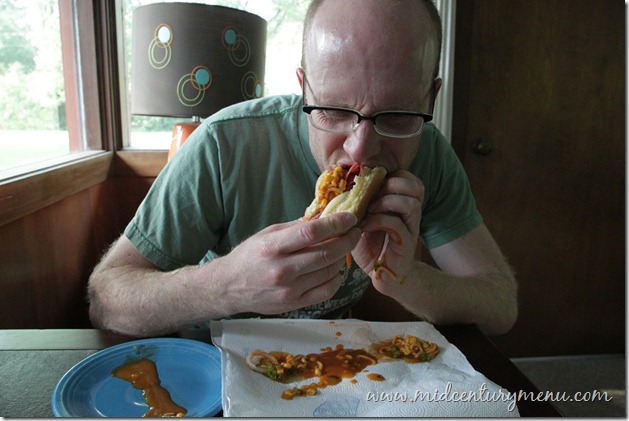 Even though I don’t normally do this, here is the second bite. Notice the noodles running down the inside of his hands. The corn trying to go up his nose. 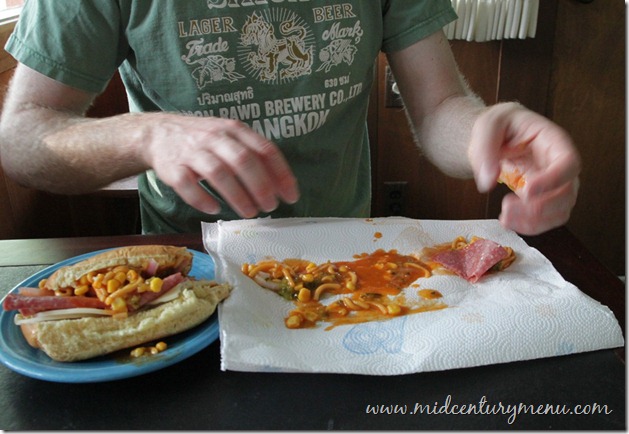 The aftermath of the second bite.  Most of the noodles have jumped ship, and really only corn remains.

“So,” I said after I moved the camera to a safe distance, “how is it?”

“How about this: They don’t taste as bad as they look.”

The Verdict: Not bad. They were far too messy to enjoy properly, but in all actuality they weren’t that bad. Tom ate the rest of his and then made another sandwich with meat, cheese and relish on it and dipped it in to a bowl of the spaghetti/corn mess. It was much neater that trying to eat it like a sub.