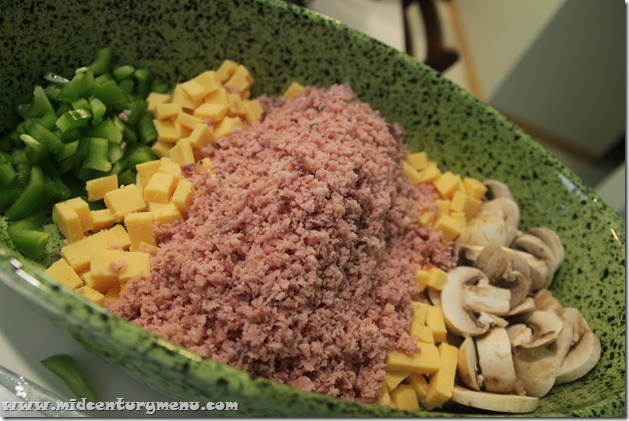 So, if you are anything like me, you have about eight pounds of leftover Easter Ham in your fridge or freezer right now, just mocking you. Well, maybe not mocking you. But it’s not exactly in there thinking about how it’s going to make itself into delicious dishes that you can feed your family.  So, when I hit the cookbooks to come up with this week’s Mid-Century Menu, I had a definite plan. I was thinking “ham”. 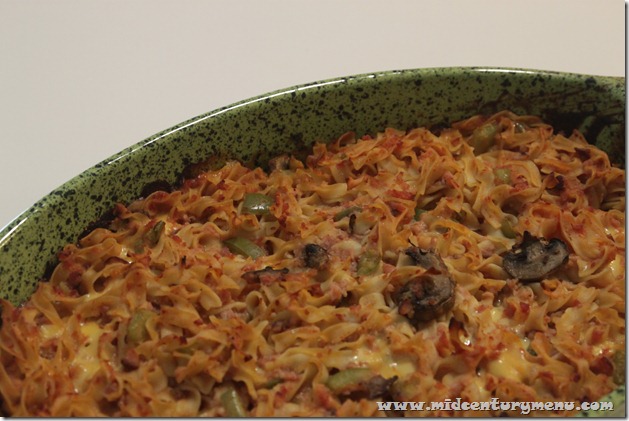 This recipe came from a little packet I picked up last time I was in Wisconsin visiting the folks. It was a promo packet that you could order in the 1930’s from the Wisconsin Department of Agriculture that was pretty much packed with as much cheese as one set of cards could handle. Cheese in casseroles? Got it. Cheese in apple pie? Got it. Cheese in gingerbread?

Oh yeah, they got it.

But as much as I want to bring you cheese in gingerbread (hold your horses, you know it’s coming), I latched onto this one not only for it’s high ham content (take that, huge piles of leftover ham!) but also for the high content of American Cheese. 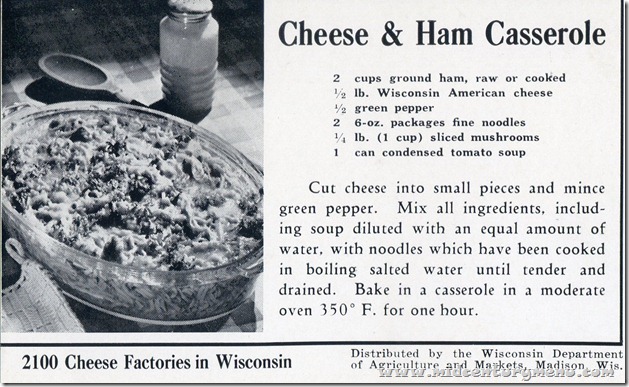 If you are a regular reader of this blog, you know I can’t pass up a chance to feed Tom American Cheese. He hates it. He loathes it. And it always gives me great pleasure to make the Man With Iron Stomach eat one of the two things that make him turn green.

“God,” he sighed. “Does it have to be American Cheese?”

“It says right here ‘Wisconsin American Cheese’. A half-pound of it.”

“Well, we have that block of 5-year-aged cheddar we brought back with us. If you want, we can use that instead and mix it in with condensed tomato soup.”

“Pass. Bring on the American.” 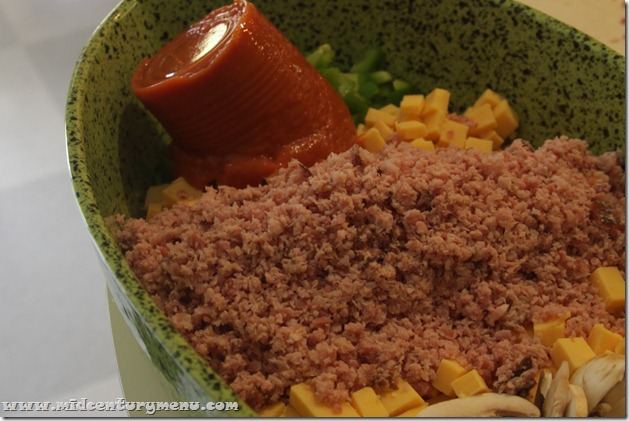 And it was a good thing he decided that. Cause I wasn’t kidding about the soup. 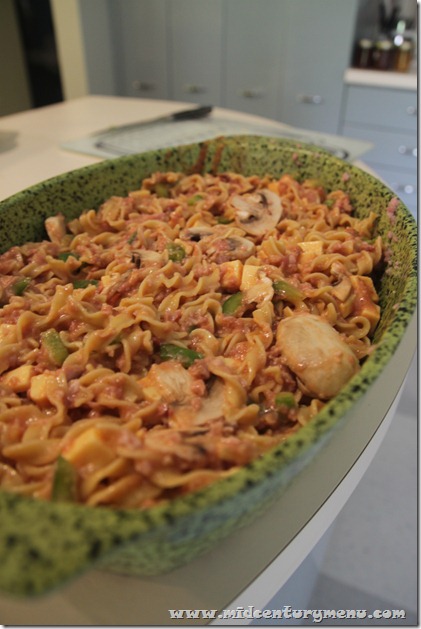 The smell coming off this thing was…intense. You can’t see it in the picture, but we were surrounded by our cats. And probably cartoon stink lines. The cats kept meowing. I think they wanted to know what in God’s name we were making. Or maybe they were trying to warn us. 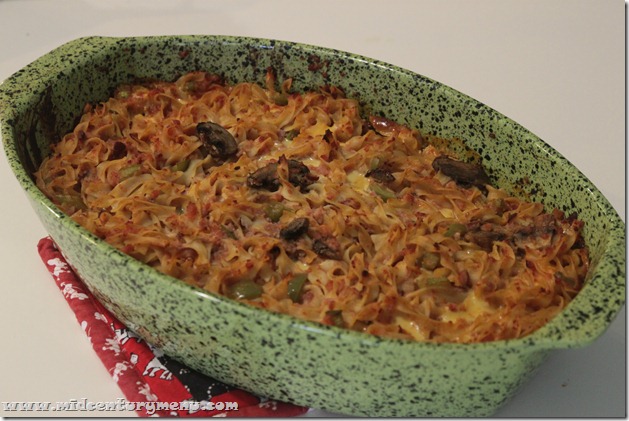 But after it baked the reek of canned soup lessened slightly. It started to smell less like soup and more like a Denver Omelet. Which I think is an improvement, but since I don’t like omelets it isn’t much of one. 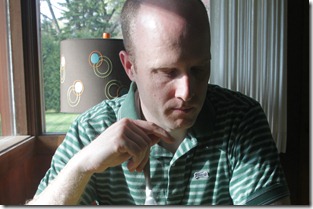 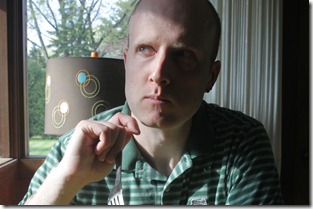 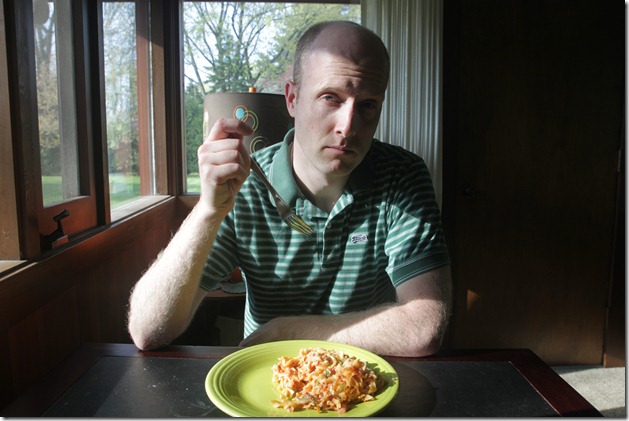 “This is surprisingly edible.”

The Verdict: Edible. I am not going to go out on a limb and say this was good either. Tom and I both ate our whole servings, and managed to eat one round of leftovers, but the rest is sitting in the fridge, sadly neglected. Tom thinks it would have been better with hamburger instead of ham, and I would have to agree with him. The tomato soup gave a definite sweet taste to the whole dish, which, when combined with the richness of the cheese and the sweet/salty from the ham, made everything a little sickening.

Print
Cheese & Ham Casserole
Author: Wisconsin Department of Agriculture and Markets
Recipe type: Main Dish
This dish is rich and sweet. Tom and I both think it would be much better with hamburger instead of ham.
Ingredients
Instructions
2.2.6

Have you sent in your entry for “Glistening and Jiggly” yet??? 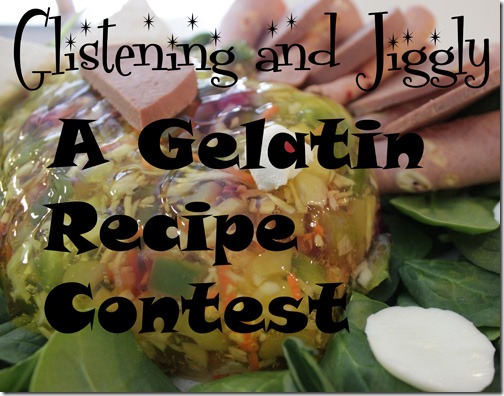 This is the last week to send it entries for our Mid-Century Menu Gelatin Contest! Be sure to have your entries emailed to me by April 25th, we have tons of fun prizes from my own coveted prize cabinet and from some of our lovely sponsors from No Pattern Required!

I’m excited to see what you’ve got!