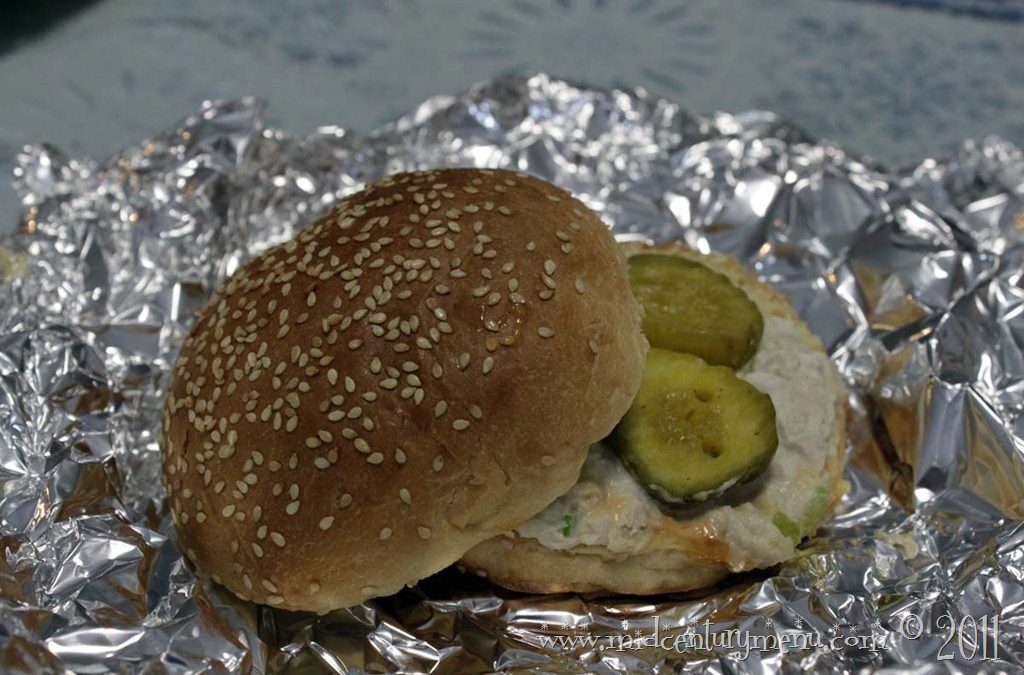 My parents have been going to Disneyland since forever and saved all sorts of things from gift bags to receipts! I had a whole collage of Disneyland memorabilia that got destroyed in one of our moves, so unfortunately I don’t have the original placemat this came from. 🙁 Also lost A-E Tickets, motel receipts, the first passport issued to Magic Kingdom Club members in 1977! Broken heart.

Anyway, here is the recipe for tuna burgers from The Pirate Ship Restaurant that was in Disneyland.

· 1 can of Tuna (Chicken of the Sea was their brand)

Mix first three ingredients and season with salt and pepper to taste. Spread Thousand Island Dressing on bottom half of buns. Top with tuna mixture and sweet pickle slices. Top with Bun. Wrap tightly in foil and heat in 350 oven for 20 minutes.

I’m hoping this is one Tom will like. I have more disgusting ones for other entries!

Is there any doubt? Even for a second? Of COURSE Disneyland would have the best vintage tuna recipe! Thanks for the wonderful submission and way to go, Toni!  I know that you sadly lost the original placement the recipe was on, but I did find an image of the placemat on the site Daveland Web, in Daveland Disneyland. What an awesome site! Check it out if you want to see TONS of great vintage Disneyland photos. AND a Chicken of the Sea advertisement from Kevin Kidney’s blog, which has a picture of the sandwich in all it’s glory. 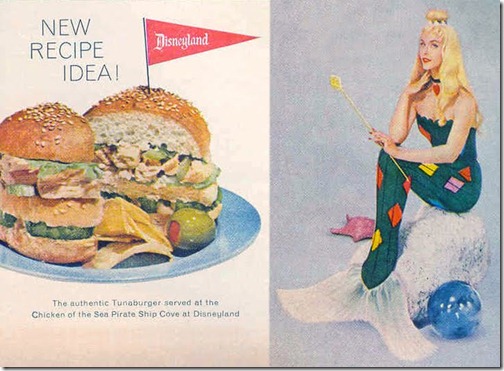 But, enough of that. Let’s get down to business! 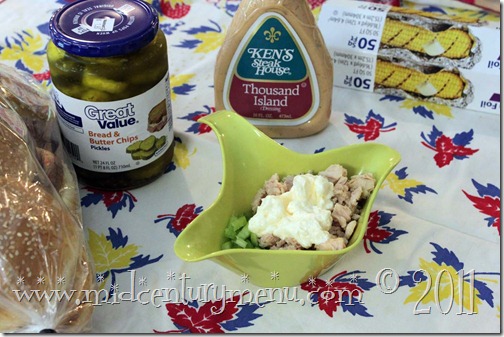 Can you see the magic of Disney at work already? The singing celery? The magnificent mayonnaise? The…thunderous…Thousand Island… 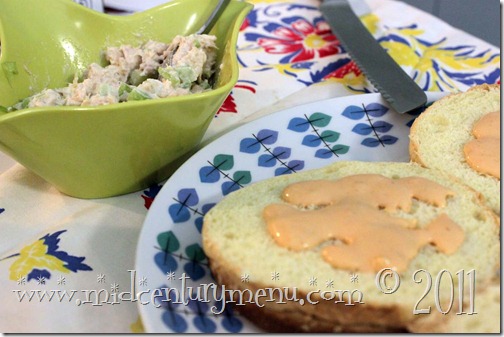 If you squint and kinda turn your head to the side, the Thousand Island dressing kinda looks like a little like Pluto. 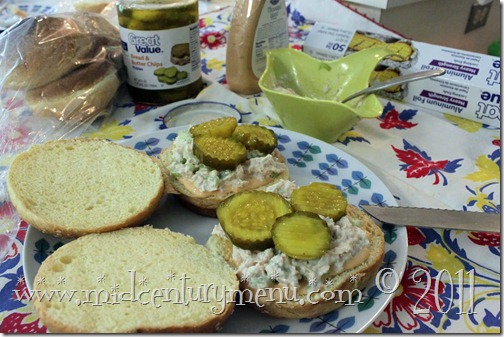 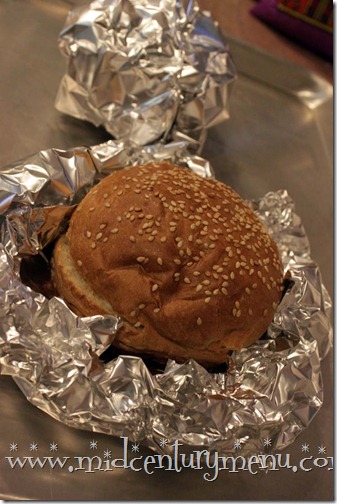 Fresh, hot and crispy straight from the oven. Yum! 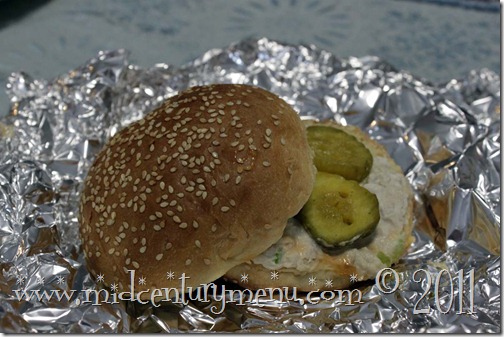 Let me tell you, after all the tuna crap we choked down, we were really, really excited to eat these. They smelled great! 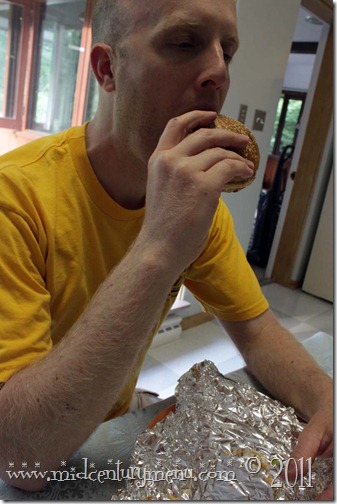 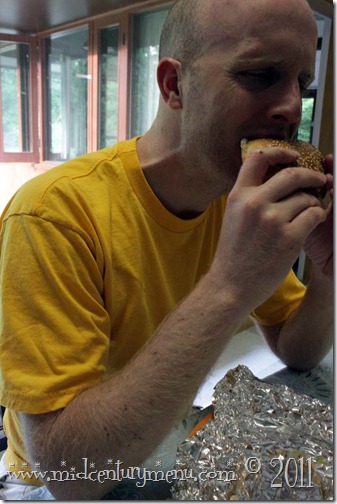 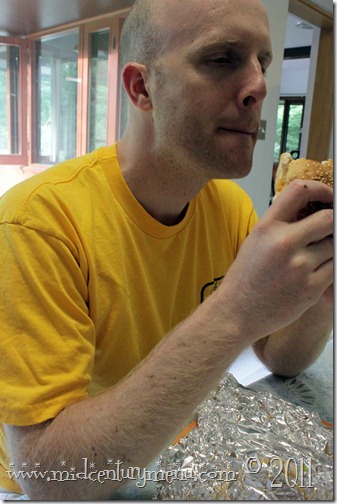 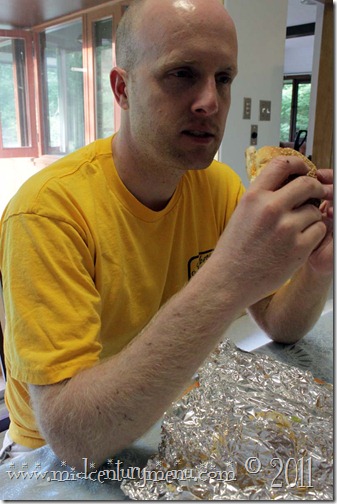 “These are really, really good.”

The Verdict: Very good if you like your tuna salad a bit on the sweet side. The sweet pickles and the Thousand Island together can be a bit overwhelming, and I can see why this would be really good kid food.  When I was first putting them together, I was concerned that the buns would end up being soggy and wet, but that actually didn’t happen. The buns were pretty crispy, and the whole thing was nice and toasty warm from the oven.

Congratulations, Toni!! It is a great vintage recipe. 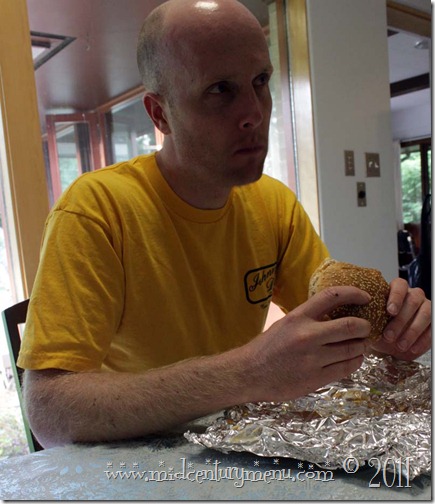 “What do you mean you only made two?”

Make sure to head back next week when we announce the final winner for our “Let’s Sing A Tune To Tuna” contest: Tom’s Choice! It’s going to be a fun one, and everyone who submitted a recipe has one more chance to win!