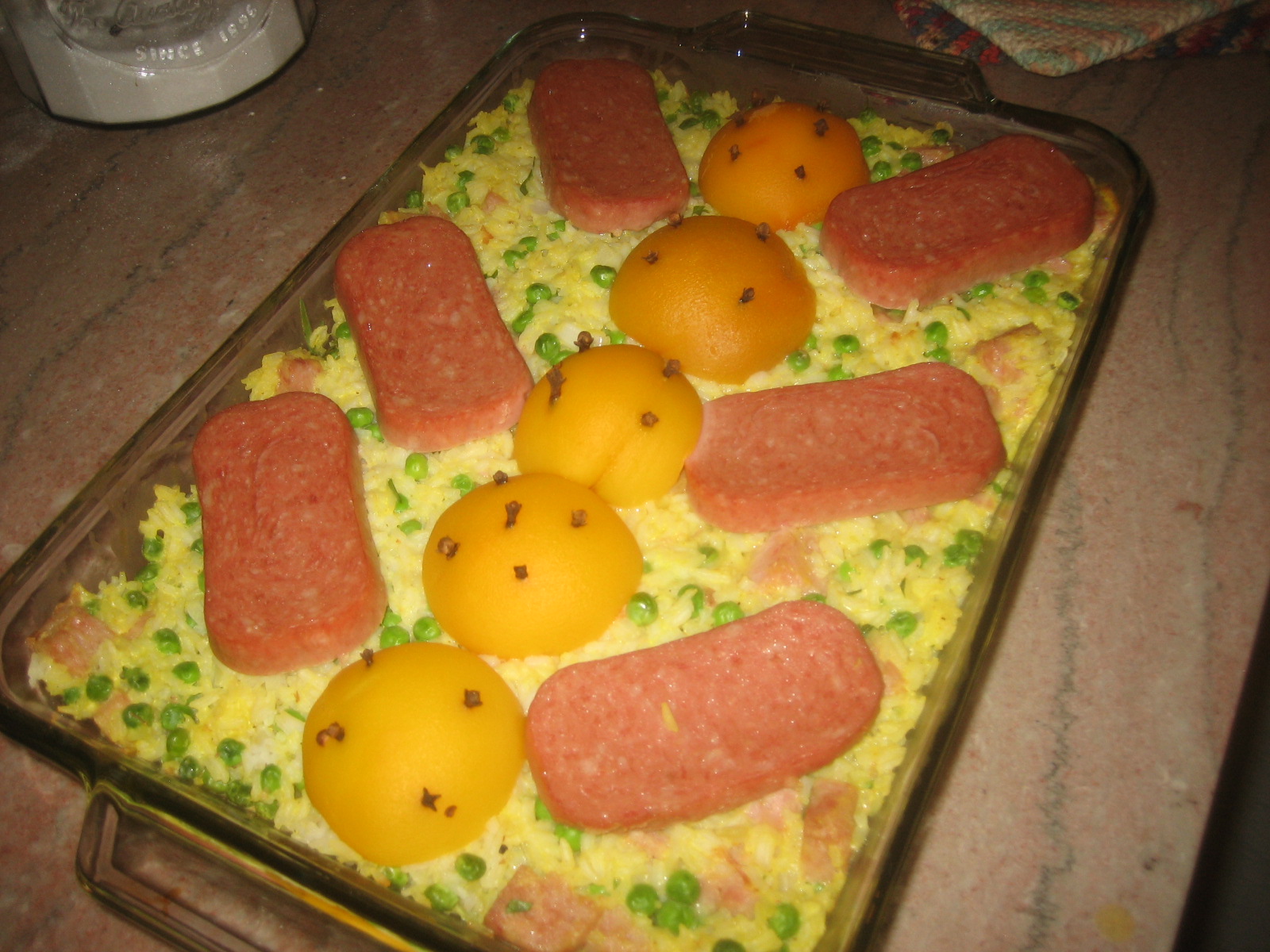 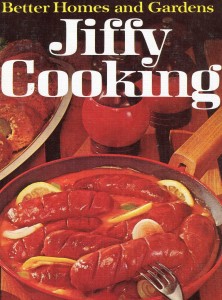 And what is the Mid-Century Menu?  Take one vintage cookbook, add one man who will eat anything and you have the recipe for some good fun.  Every week, I pick an “interesting” recipe from a vintage cook book, put together a menu, prepare it, and serve it for dinner to my husband. Sometimes it is good, and sometimes things go horribly wrong.

This week I decided to delve back into a book that we have visited before, Jiffy Home Cooking by Better Homes and Gardens.  This book was published in 1968, and the premise of this book is basically taking pre-packed and convienence foods and turning them into dinners that everyone can enjoy.  Or, “everyone who loves salt more than anything in the whole world” can enjoy.  But it still is good fun.  In a weird, weird sort of way.

So, here is my choice for this week. Chevron Rice Bake: 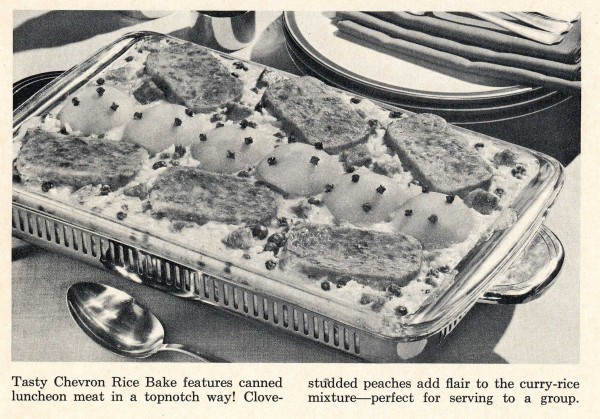 Topnotch, huh? Ummmm…no. I don’t think so.  And what is with the peaches studded with cloves?  It reminds me a lot of Peachy-Spam dinner loaf, which I remember was really salty. The curry-rice mixture is going to add a crazy twist. 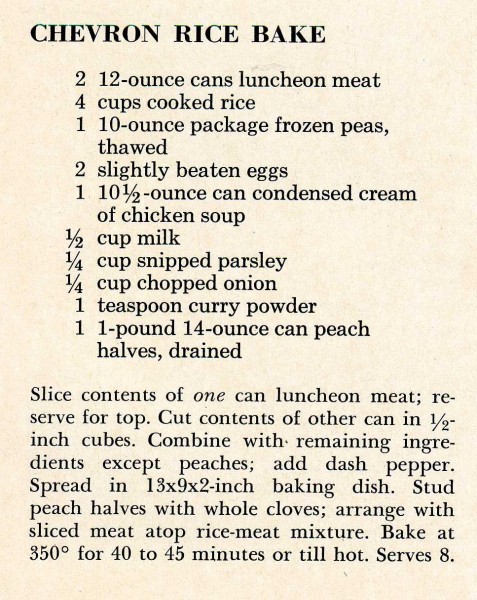 Wow. The base is cream of chicken soup?  Really?!?  Oh baby, I am excited to try this one! 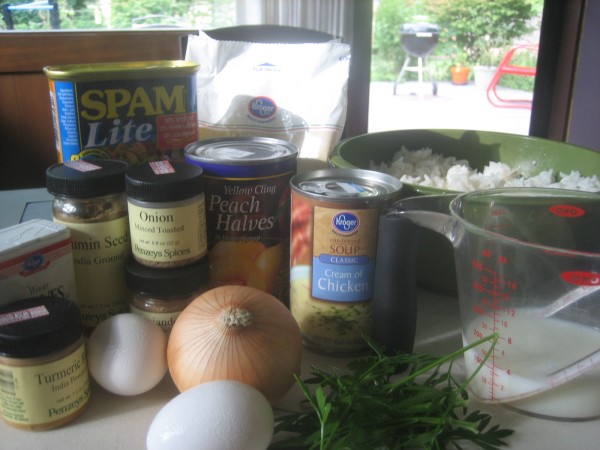 A whole pile of ingredients for this meal.  The unusually large amount of spices for this meal is actually deceptive. The recipe calls for 1 tsp of curry powder, which is made up of turmeric, corriander, cumin and sometimes onion. So, all of those spices are going to be mixed into 1 tsp. Because I refuse to buy curry powder when I have the ingredients to make it.

Now, this recipe calls for two WHOLE cans of Spam.  That’s right, two….whole…cans.  And that looks something like…. 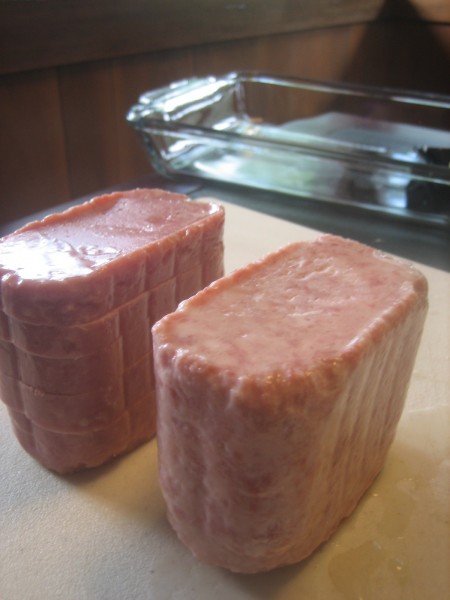 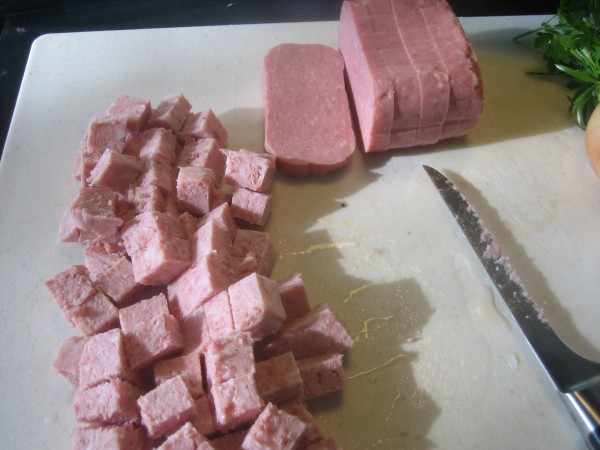 One Spam is cubed, and the other is sliced.  And yes, they are different colors.  One is low fat because I want Hubs to live to a nice old age.  I want the Mid-Century meal to make him miserable, not kill him! 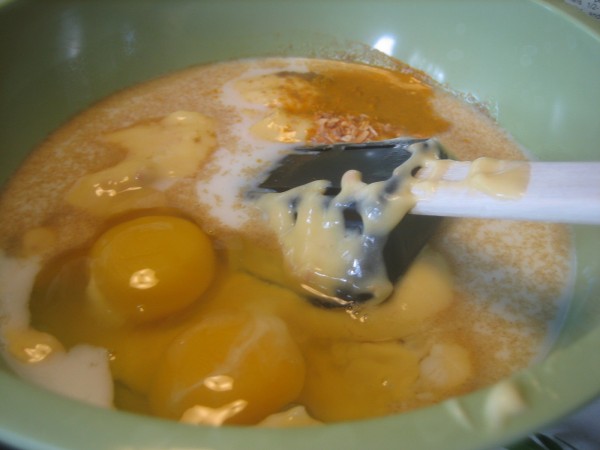 The “sauce” for the bake; cream of chicken soup, eggs, milk and spices. 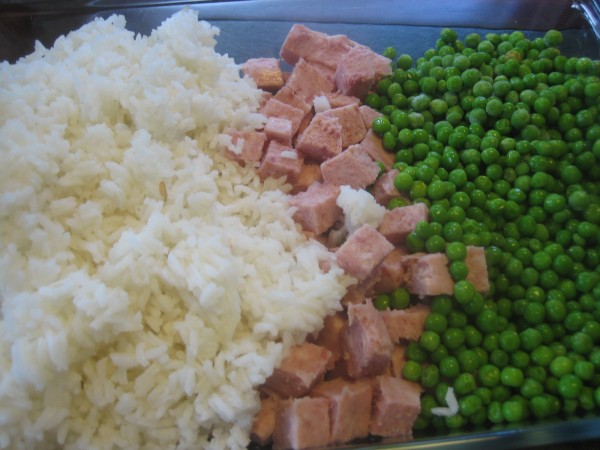 The rice, Spam and peas, ready to be mixed. 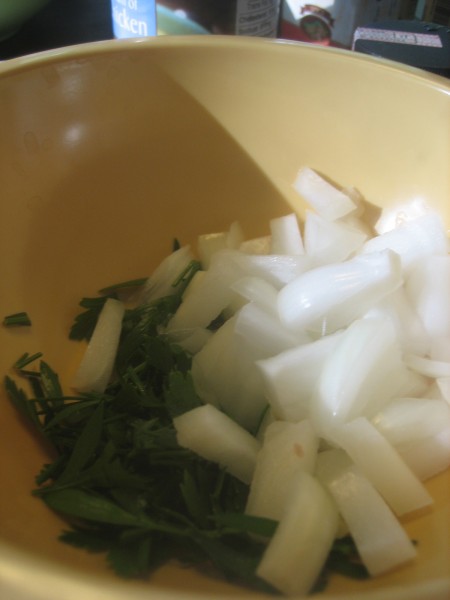 Onions and parsley….some of the last fresh parsley from our garden. Sniff. 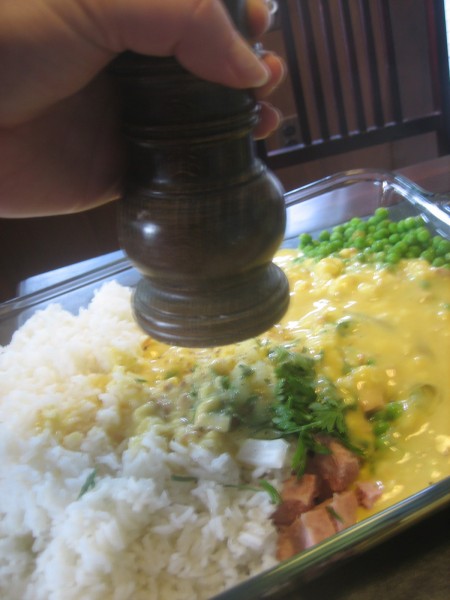 Adding the “dash” of pepper the recipe just kind of threw in there. Good thing I was prepared and had pepper on hand, or it might have been a disaster. 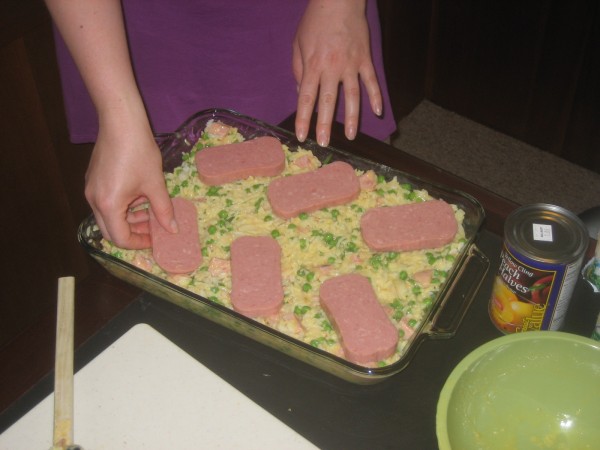 Carefully arranging Spam slices on the casserole.  This is my favorite part about the Mid-Century Menu, I think.  Arranging everything ridiculously so it looks “attractive”. I think this was my third favorite arrangement, after Spaghetti Timbales and Fish Sticks Polynesian. 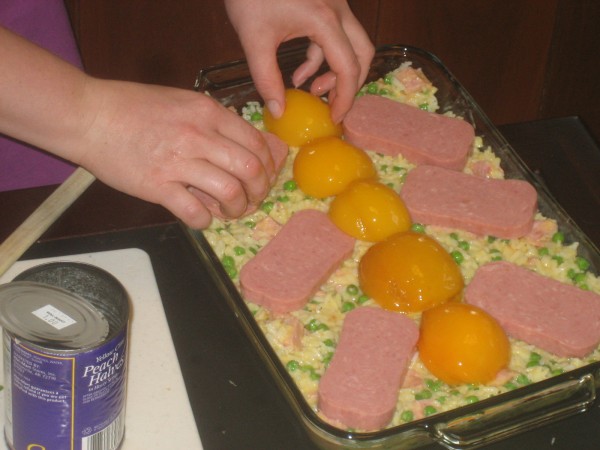 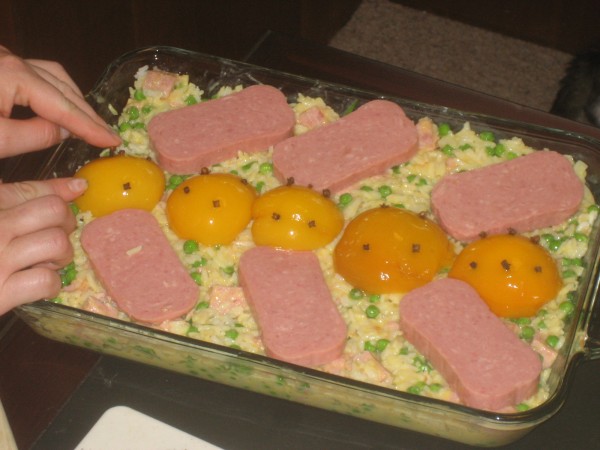 adding cloves to peaches.  What is with them and the cloves? 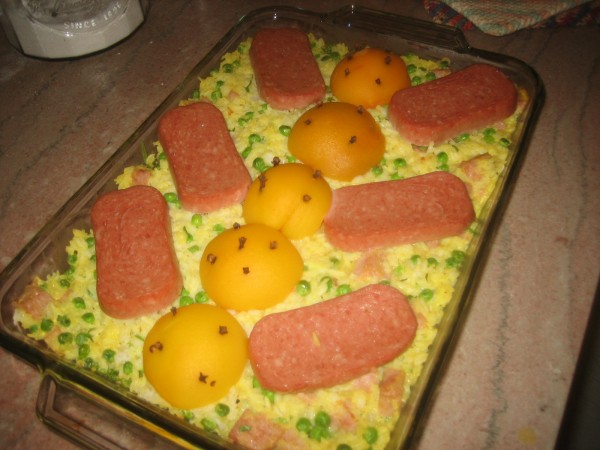 After 45 minutes in the oven.  Mmmm, mmmm, smell that…curry?

Ok, so it did smell a little weird.  But the smell was kind of overpowered by the smell from the spinach side dish, which REEKED like onion soup mix. 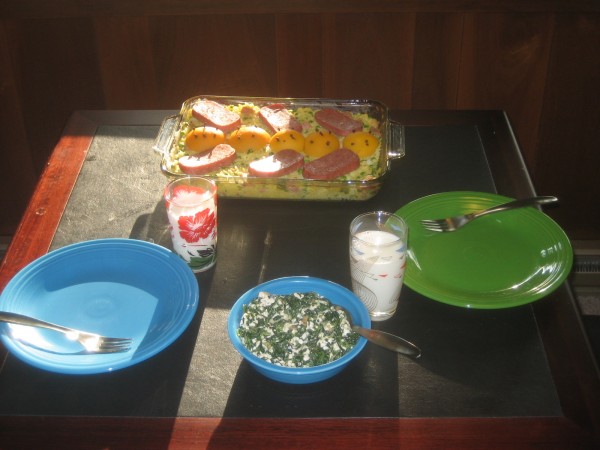 The cheerful little tablescape. Casserole, milk, and what some might consider a vegetable.  Mid-Century cooking at its finest. 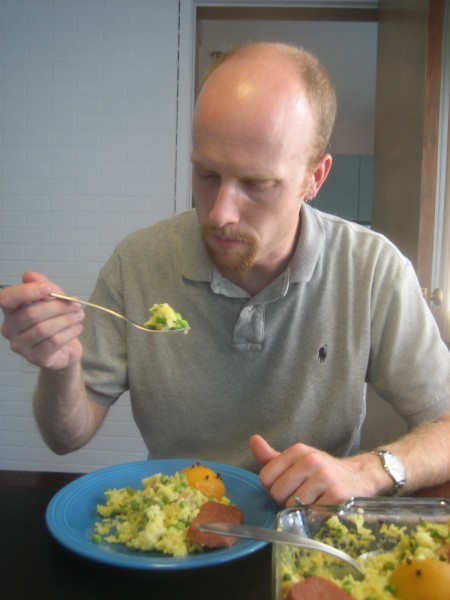 But Hubs didn’t want to take the first bite. Maybe it was because he had recently been sick, or maybe it was the smells of curry and onion soup mix mingling in the air.

*laughing* “But you’ve always said you want me to make Indian food.”

“That is not funny.”

Well, after a bit he did get the first bite down.  And so did I.  It wasn’t great, but it was edible.  The curry taste didn’t go to well with the cream of chicken soup, but I think I may have added too much turmeric, so that might be my fault.  The real suprise was how good the reduced fat Spam was.  I think I like it better than real Spam, and it blows generic Spam out of the water!

But I was still too scared to eat a clove-covered peach with it.  Hubs gamely cut one up, and mixed it in with the casserole. His only remark about it was, “I can pick the cloves out, right?”

Chevron Rice Bake: Strange, but not the worse thing we have ever eaten.  Be sure to go light on the curry powder.  It would have tasted better without it, in my opinion.

Special Spinach: So very, very salty. Not good. The taste of onion soup mix was overwhelming, but just the spinach and cottage cheese might have been good by themselves.

Pots De Creme Chocolate: Tasted like chocolate chips melted in chocolate pudding, so really good.  I haven’t made a “cook and serve” pudding since I lived with my parents, so it was a fun project. Especially because we got to buy dessert topping in a can. 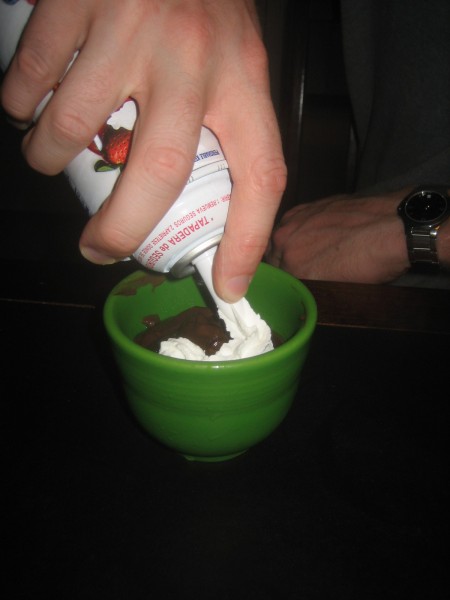 Hooray for whip cream in a can! Yum! 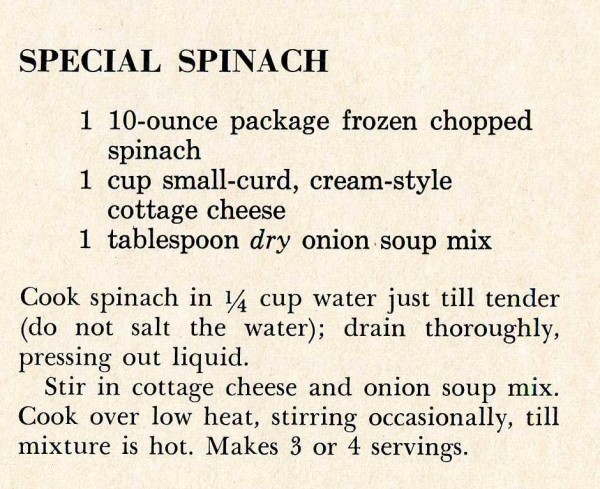 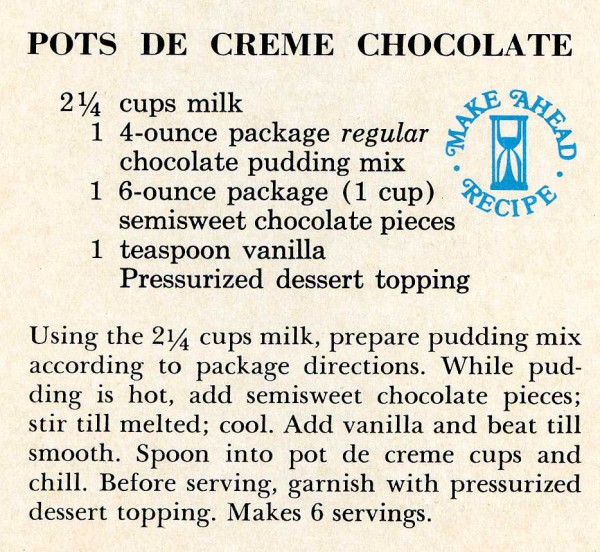